Accessibility links
'China's Leonard Cohen' Calls Out Political Corruption Zuoxiao Zuzhou is a controversial rock musician: He's hardly ever in tune. But in China he's become the ersatz voice of a generation, sometimes working alongside his close friend Ai Weiwei. 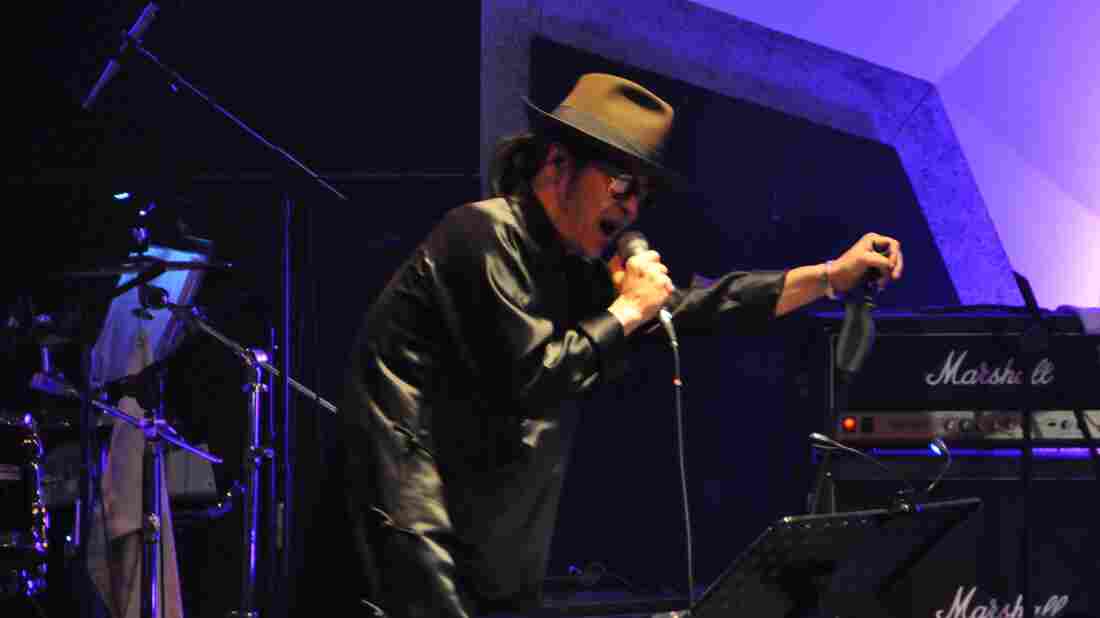 Zuoxiao Zuzhou performing at his first concert in Beijing in two years on Jan. 18. Yao Lei/Courtesy of the artist hide caption 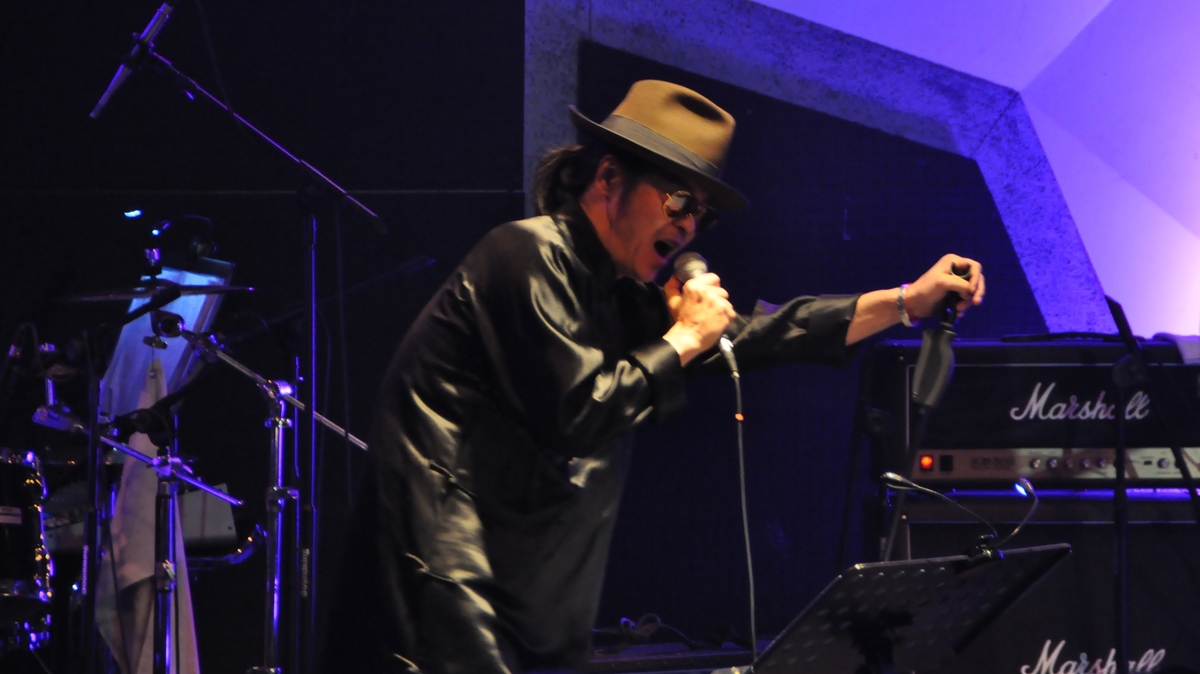 Zuoxiao Zuzhou performing at his first concert in Beijing in two years on Jan. 18.

Yao Lei/Courtesy of the artist

Zuoxiao Zuzhou is a Chinese singer whose accented, croaky voice is hardly ever in tune. But for his fans he's the voice of a generation — one of the very few voices who dare to speak out. After a collaboration, Cowboy Junkies member Michael Timmins called him "China's Leonard Cohen."

On These Tiny Grapes, Zuoxiao's new album of edgy ballads focusing on the woes of modern-day China, he hones in on rampant corruption, food scandals, injustice and abuse of power.

"The government blamed [milk company] Sanlu, and Sanlu blamed the farmers, and the farmers blamed the cows," he sings about the 2008 tainted milk scandal in which six infants died.

These lyrics are typical of Zuoxiao's dark vision and biting sarcasm. But this album was, to a certain extent, crowd-sourced. He incorporated lyrics provided after an appeal on the Chinese equivalent of Twitter, took lyrics from text messages and even had lyrics written for him by Han Han and Li Chengpeng — two of China's most biting political commentators.

Zuoxiao says he doesn't intentionally take on political subjects. "I don't understand politics, but perhaps my person is political," he says. "People say I write this stuff on purpose, but when I write, this is what I write."

He attributes his writing to his background. His family, he says, was very poor and uneducated, and he grew up in an isolated country town in Jiangsu province. He was a high school dropout, joining the army at just 15 years old. His instinct is to identify with the victims and to speak out for them — even if others won't.

"Chinese people are too rubbish. I'm also one of them," Zuoxiao says. "No one is willing to stand up and speak out. Now our house is being demolished and so many people are happy for their houses to be destroyed. Out of 100 houses, maybe only one or two of us will stick out."

For the past three months, he's led a public struggle against the demolition of the house belonging to his parents-in-law in Changzhou, Jiangsu province. On Jan. 18, he performed his first gig in two years in Beijing. His rendition of a song called "Nailhouse," the term used for those who resist forced demolition, was greeted enthusiastically by fans, who sang the chorus along with him.

"A Walk In The Park"

“I Cannot Sit Sadly By Your Side”

So far, the house is still standing, which is seen as a victory for the singer. But he says it's only a matter of time until it's demolished.

"They can't not knock down our house; they'll definitely find a way. Because a win for me would represent a win for the ordinary people, so they won't let me win," he says.

Among netizens, Zuoxiao's stance has been controversial. But he believes the authorities have played a part in waging an online campaign against him.

"They started spreading rumors about me, saying I wanted lots of money," he says. "It's like the Cultural Revolution. They are smearing me."

Musically, Zuoxiao is an innovator. He doesn't sing in tune and his accent's been compared to a southern"street seller's voice — buzzing and crashing, an honorable refusal of standard Mandarin. He says he's inspired by The Doors, Nirvana and Metallica. He had never heard Leonard Cohen's music until 2000, well after people had begun comparing their sound.

Zuoxiao's song "Methodology" is Communist rhetoric repackaged for a new age, with a sardonic twist. It consists of excerpts of the work report delivered to the 15th party congress in 1997 by former Communist party chief Jiang Zemin. Traditional Chinese instruments are overlaid with modern beats, while Zuoxiao screeches out sections of the speech about "Mao Zedong thought" and "Deng Xiaoping theory." His voice slides up and down the scale, the vowels elongated and exaggerated. He denies this was an attempt to mock Jiang.

"People thought I was imitating him, but I'm not," Zuoxiao says. "My hometown is near his, so we have similar accents."

He came up with the idea for "Methodology" in 1997. He'd been detained by the authorities for three weeks on suspicion of criminal damage, though no legal action was ever taken.

"I'd just been released from jail where nobody talks to you, and I wanted to see something fun," he says. "Then I turned on the television and [Jiang] was on every channel. I thought his voice was interesting. I went out to buy a People's Daily newspaper. I thought, 'These can be my lyrics. I'll sing this.'... If it's sarcastic and mocking, then all my songs are that way. Other people always think that, but I don't."

It took 10 years before the song was able to be released in mainland China. Zuoxiao describes the censorship process for his songs as "very troublesome," saying his most recent album, These Tiny Grapes, took 14 months to get approved for release.

But he's taken an unusual approach, charging high prices for his CDs while simultaneously allowing his music to be downloaded for free online. His 2008 album, You Know Where the East Is, cost 80 USD — reportedly the most expensive album in Chinese history.

A Friend And Fellow Agitator

At a recent show in Beijing, Zuoxiao wore a trademark hat, dark glasses and a long traditional Chinese robe made of brown silk. His voice was as raspy as sandpaper. By the end of the night, the entire had band stripped its clothing off and was performing semi-naked.

Tickets cost cost 380 yuan (60 USD), but for fan Dale Yang, the expense was worth it to support the singer.

"His lyrics contain a lot of political issues and social issues — it's not only a song," Dale Yang says. "One of the things that makes Zuoxiao more outstanding than other people is that here there are very few people who dare to do this, which is obvious to the audience. That's what draws me here today."

His friend, Lucifer Yang, agrees that the singer sums up prevailing sentiment among many young people.

"We don't want to fight against the government, but we really think they should do something better," he says. "I'm not really happy with the government right now."

The dissident artist Ai Weiwei was also at the show, drinking beer and shouting through the songs. The two have been close friends for 20 years, and Ai asserts that his friend is the most important musician in China today.

"His music is the best, the most important because he has a great attitude, Ai says. "I mean, he has power and passion, and he always knows what he should say. This is great. People love him."

In fact, the two are so close that they handcuffed themselves together for a parody of the viral hit "Gangnam Style."

Upon entering Zuoxiao's grey brick house, the first thing any visitor will notice is an enormous portrait on the wall, showing him with angel wings, sitting on Ai's shoulders. Zuoxiao began his career as an artist before turning to music, and the two friends have collaborated on films, as well as more political ventures.

When police beat up Ai three years ago in Chengdu for collecting the names of the children who died in the Sichuan earthquake, the singer was with him.

"I've never put any hope in Chinese politics," Zuoxiao says. "The people of this soil have no hope. There is a big problem with our education. For the past 60 years, people have been brainwashed. Everyone is too selfish. No one has any faith."

The song has been removed from the Internet in China, possibly because of associations with a recent political scandal involving former Chongqing party Bo Xilai, who is accused of abuse of power and corruption. But Zuoxiao says it's not about Chongqing.

"It's not about any one place in China," he says. "This is happening all over the country — in every county, in every town."