Accessibility links
Inaugural Poet Richard Blanco: 'I Finally Felt Like I Was Home' Blanco, who read his poem "One Today" at Obama's second inauguration, is the first immigrant, Latino and openly gay poet chosen to read at an inauguration. 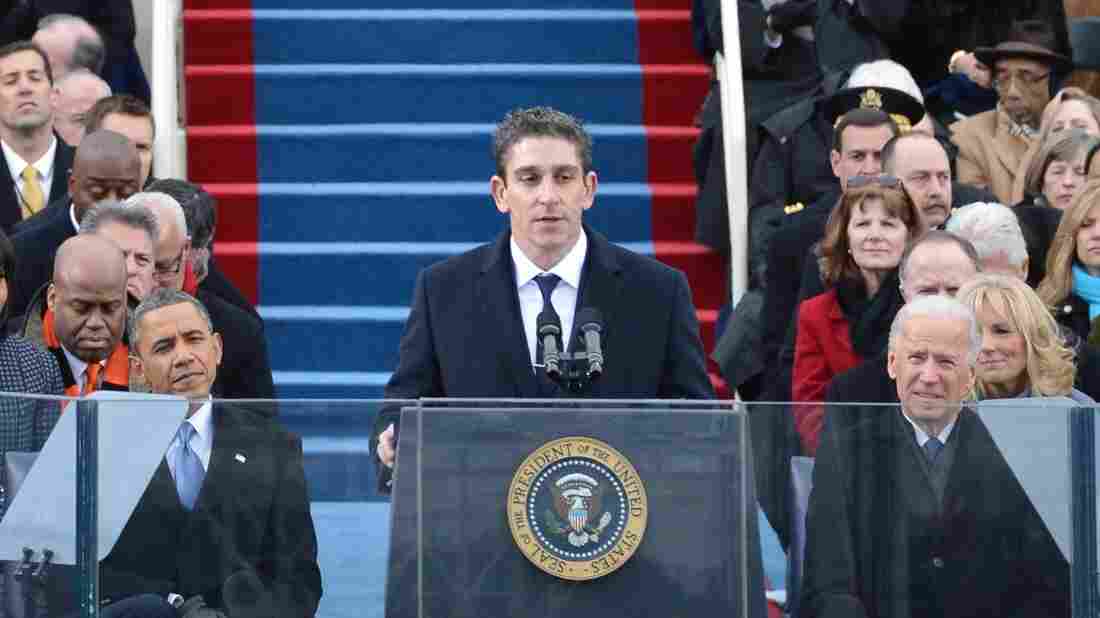 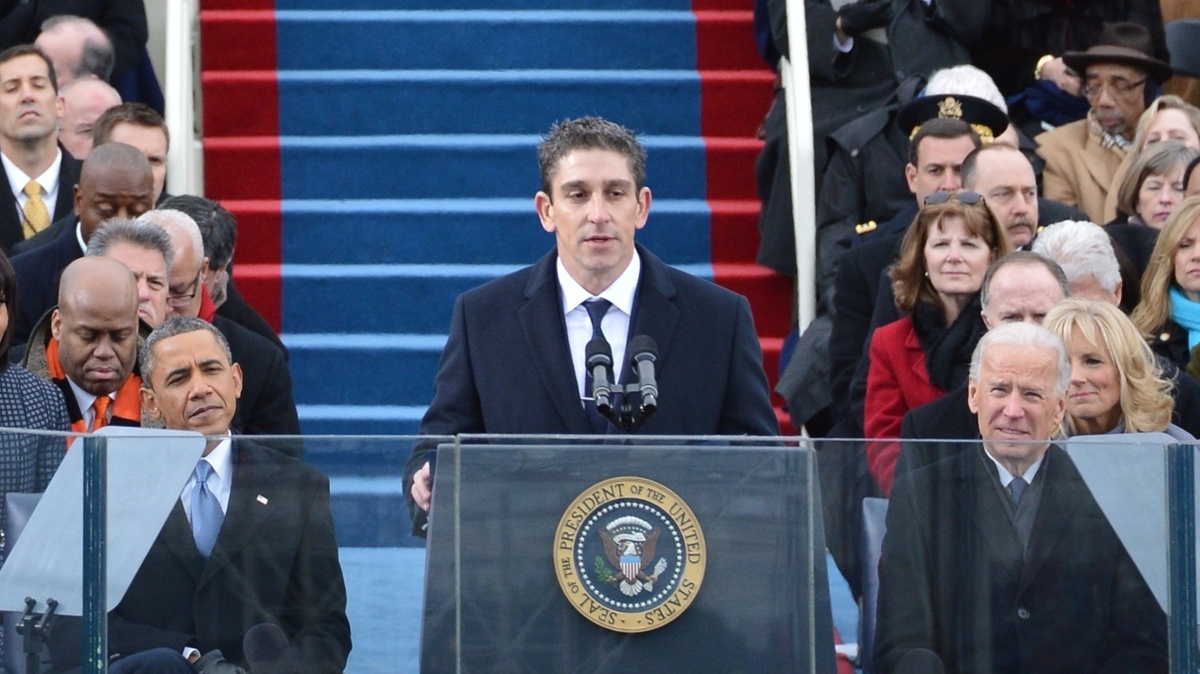 "I just got the phone call one day," is how poet Richard Blanco describes to Fresh Air's Terry Gross how he learned he had been selected to write and read the inaugural poem for President Obama's second swearing-in on Jan. 21.

Blanco is the first immigrant, Latino and openly gay poet chosen to read at an inauguration and, at 44, also the youngest. The author most recently of the collection Looking for the Gulf Motel, which explores themes of sexuality and home, says he doesn't know how or who put his name up for consideration. 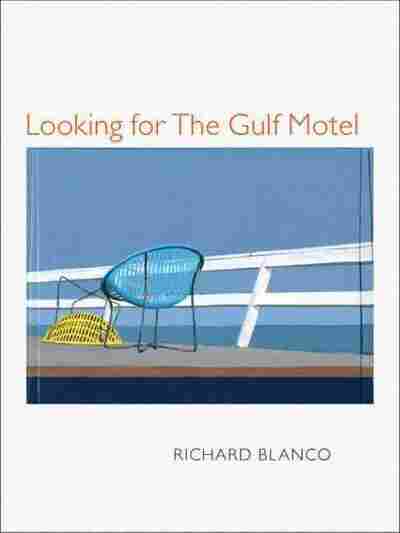 "I'm sure it will come to light at some point," he says, "[but] in some ways I don't want to know. ... In some ways I like the mystery myself that I'm not sure exactly. ... I'm wondering if I'll be disappointed when I find out. ... [Now] I can imagine him sitting in the Oval Office with my book and saying, 'Get this guy in here!' "

After the phone call came, Blanco wrote three poems for the inauguration committee. Of those, they chose "One Today." Written shortly after the Newtown shooting, the poem references the 20 children killed:

the impossible vocabulary of sorrow that won't explain
the empty desks of twenty children marked absent
today, and forever ...

"What I find interesting about the inaugural poem as almost like a subgenre," says Blanco, "is that it's a unique snapshot of where we are as a country at that moment," and Newtown, of course, says Blanco, was part of that snapshot and "emotional landscape" that he was trying to illustrate.

The balancing act then came in deciding where he, himself, belonged in the poem.

"One of the hardest challenges of the poem itself overall was how to at once put myself in there, but realizing that this poem isn't about me, it's about our country," he says. "Part of the process that I went through was deciding what was important enough to me that I felt I needed to put in there. Of course, the first impulse was — because I was the youngest, first openly gay, first Hispanic or Latino — the first impulse was: I have to represent all this in the poem, and sort of be more of an in-your-face kind of poem. Then I took a step back from that and I realized, well, yes, it's all those things, but I think there's a larger platform here, a larger sense of what America is that I need to come through in the poem." 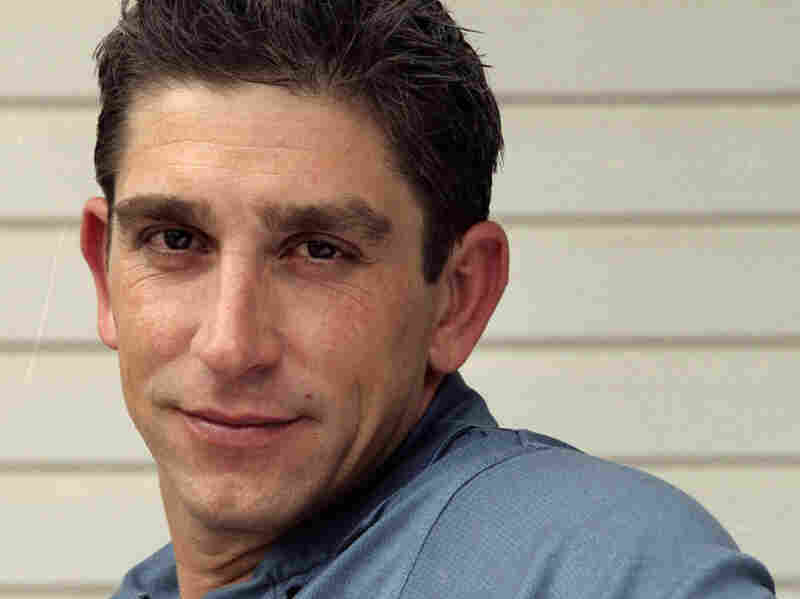 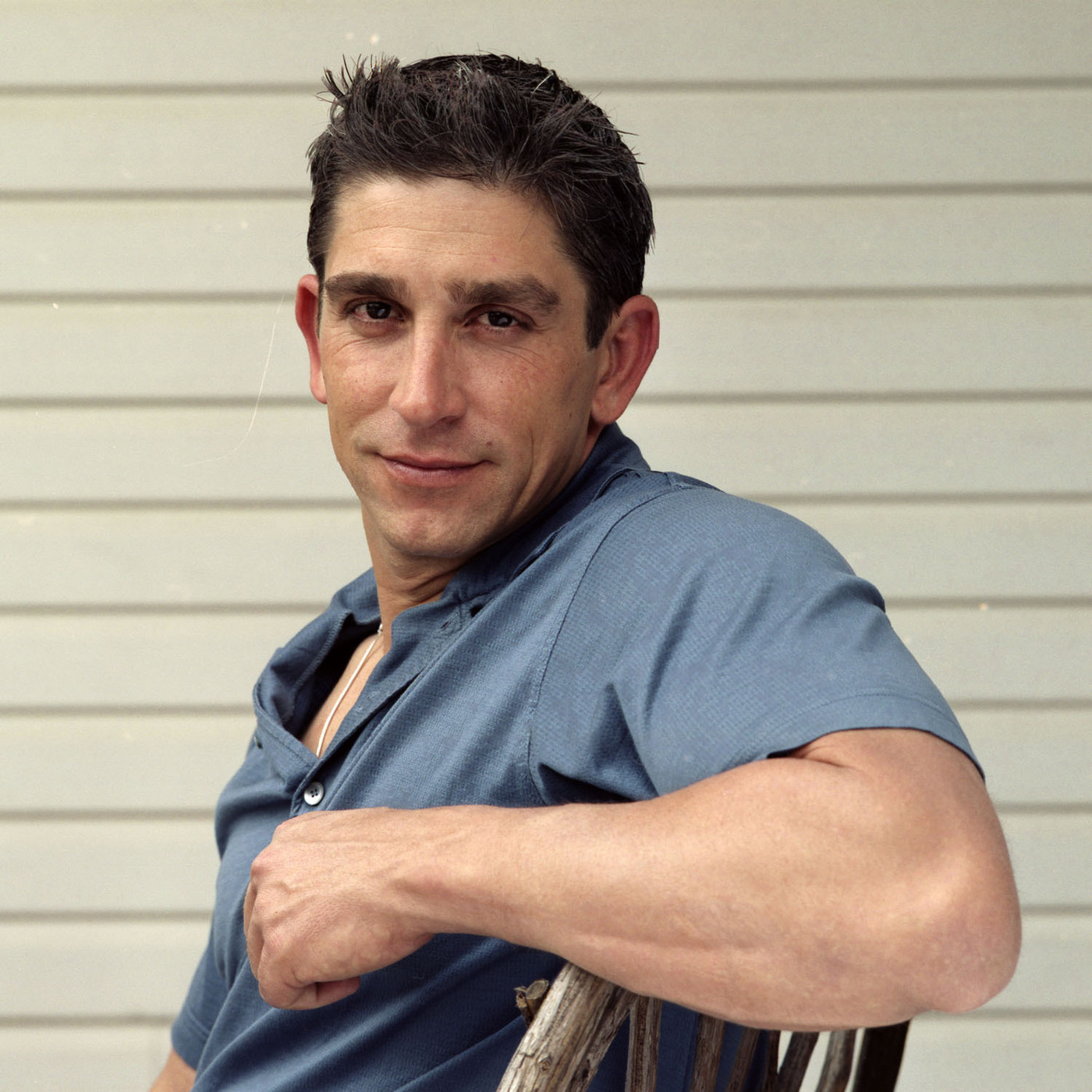 On his Cuban grandmother

"My grandmother was as xenophobic as she was homophobic, so I remember growing up so that anything that seemed culturally odd or weird or strange was also sort of tagged as 'queer' — and I'm talking like things like Legos and Fruit Loops — so anything she perceived as strange she also questioned in terms of my sexuality. ... My grandmother was also a very central figure in my life for being one of those relatives that ended up doing a lot of good for you, in terms of all the harm that they did to you."

On where he's "from"

"I always claim that my soul is Cuban — my soul was made in Cuba — and I was assembled in Spain and then imported to the United States, because I was only 45 days old when we left Spain for Manhattan, so my green card photo is my first baby photo."

"As an engineer ... in your designs and whatnot, you're trained to figure out what's going to go wrong. That's how you design a lot of things. You're like, 'OK, that's a decently designed curve there in the road, but what could go wrong? What's wrong with this design?' And you're constantly putting things up to the test and up to the test, and overdesigning and implementing things and safety factors, and if I wasn't like that already, 25 years of engineering have pretty much reinforced that."

On writing a poem about his father's grave

"That poem really started with this idea of, 'Where I will be buried, where do I ultimately belong, and where do I want to spend eternity?' And, as it mentions in the poem — especially in New England — you see these really old graveyards and you're wondering, 'I don't know. I love being in New England, but I don't know if I want to be buried here, and I don't know if Miami is the right place either.' So I haven't decided, but it's something I've always thought of in the sense of we're not where we're from necessarily, but where we choose to die. Where we choose to be buried, in a sense, tells more about who we are than where we're born, which we have no say over."

"All along, through different stages of my relationship with America ... I've always been sort of wondering: Where's home? Is home America? That ideal doesn't really exist, does it? Where's all those sort of principals that I grew up with? And when I was up on that platform — for those two hours or so that we were up there — it was like all those ideals came to life in ways that I had never imagined. So even with all the politics and all the fiscal cliff and all the rest that [was] going on, for those two hours there was still this sense that was still so pure about America. ... Just the idea that all those hundreds of thousands of people have just come to bear witness. ... I really embraced America up there like I never had before, and I think I finally felt like I was home in some way. ... And I turned to my mother at one moment and I told her, 'Well, I think we're finally American.' "

Read an excerpt of Looking for the Gulf Motel