Accessibility links
Cold War Bunker Network Repurposed For 21st Century Threats In Charlotte, N.C., a secret bunker rests quietly below a radio station. Built in 1963, it was part of a federal network designed to provide emergency communications in case of a nuclear attack. With a new slew of potential threats to contend with, FEMA has revived the idea. 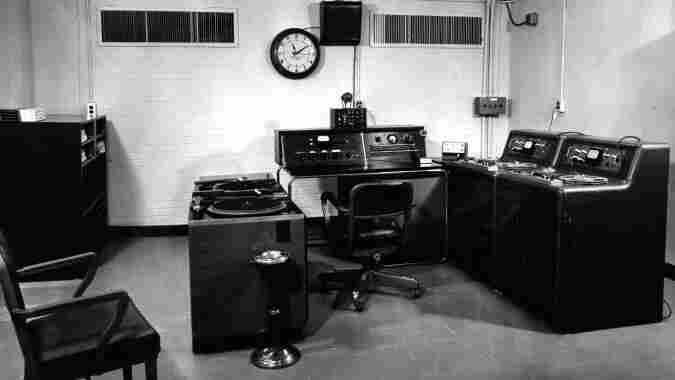 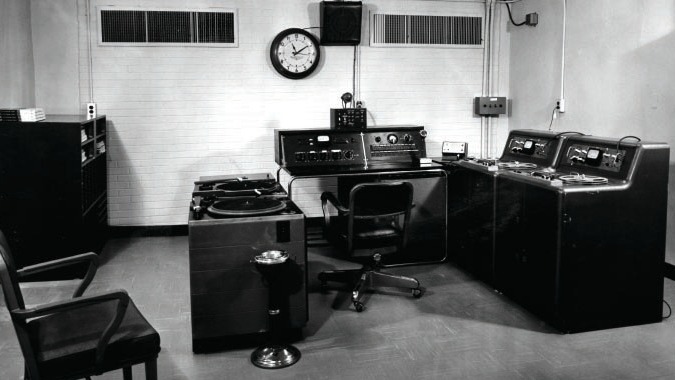 WBT radio's bomb shelter in Charlotte, N.C., part of a government-funded emergency communications network, as it looked in 1963.

There's an underground bunker at a radio station in Charlotte, N.C., where time has stopped. Built decades ago to provide safety and vital communications in the event of a nuclear attack, it's now a perfectly preserved relic of Cold War fear that's gained new relevance.

The secret bunker is part of the office lore that old-timers at WBT Radio whisper to the newbies. That's how radio host Mike Collins learned of it back in the 1980s.

"I remember being amazed that it would really exist," Collins says, laughing. "Because I thought, you know, in the event of a nuclear attack, we wouldn't be here to broadcast!"

A Piece Of The Early Emergency Broadcast System

There was a certain naivete in 1962, when schoolchildren were learning to duck under their desks in atomic bomb drills and President John F. Kennedy was taking to the airwaves with dire warnings of Soviet missiles in Cuba, "capable of striking Washington, D.C., the Panama Canal, Cape Canaveral, Mexico City, or any other city in the southeastern part of the United States." 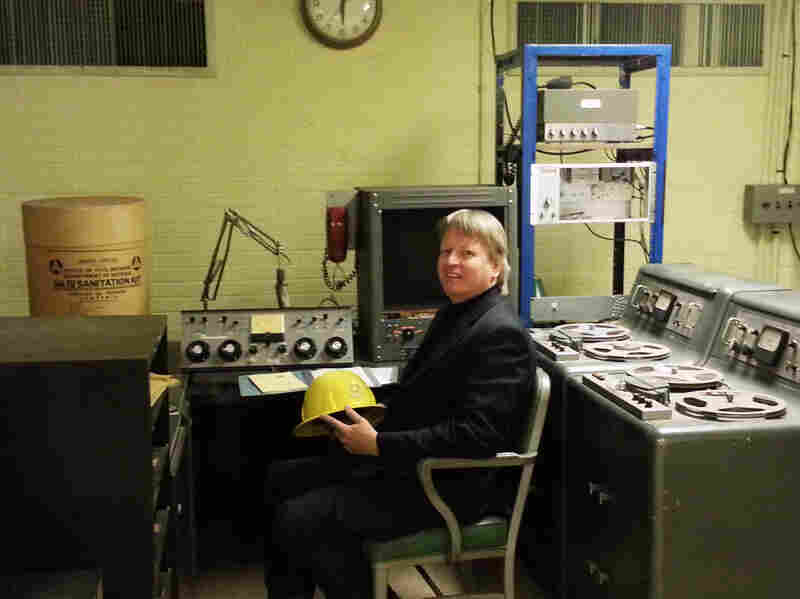 The Cuban missile crisis prompted Kennedy to launch the Emergency Broadcast System in 1963 and outfit radio stations all over the country — including WBT — with doomsday bunkers that could bring his voice to the American people during a national crisis.

Descending into a chilly basement with government-issue green walls, the station's chief engineer, Jerry Dowd, shows off a photo of the room from 1963, when the shelter was built.

"As you can tell, not a lot has changed," he says. "The clock stopped."

Aside from the clock, stuck at 6:00, everything still works. Emergency supplies to keep some poor engineer alive and broadcasting for up to 60 days are still here, too.

"We have a leftover can of survival crackers that were date-coded from April 1963," Dowd says. "We had ... drinking water."

And, holding up something like a cardboard bucket with a hole in the top, he shows off the all-important "sanitation kit."

"What you did is you took the lid off," he says, chuckling. "It's a porta potty." 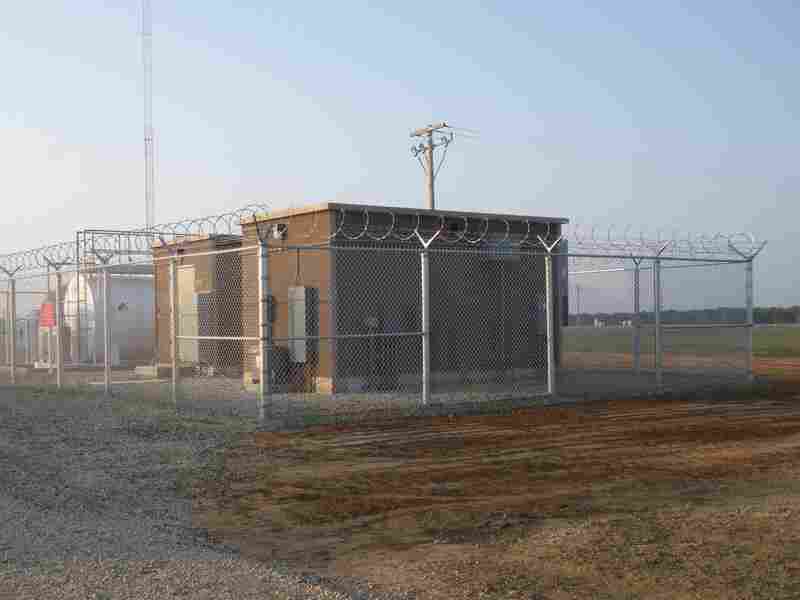 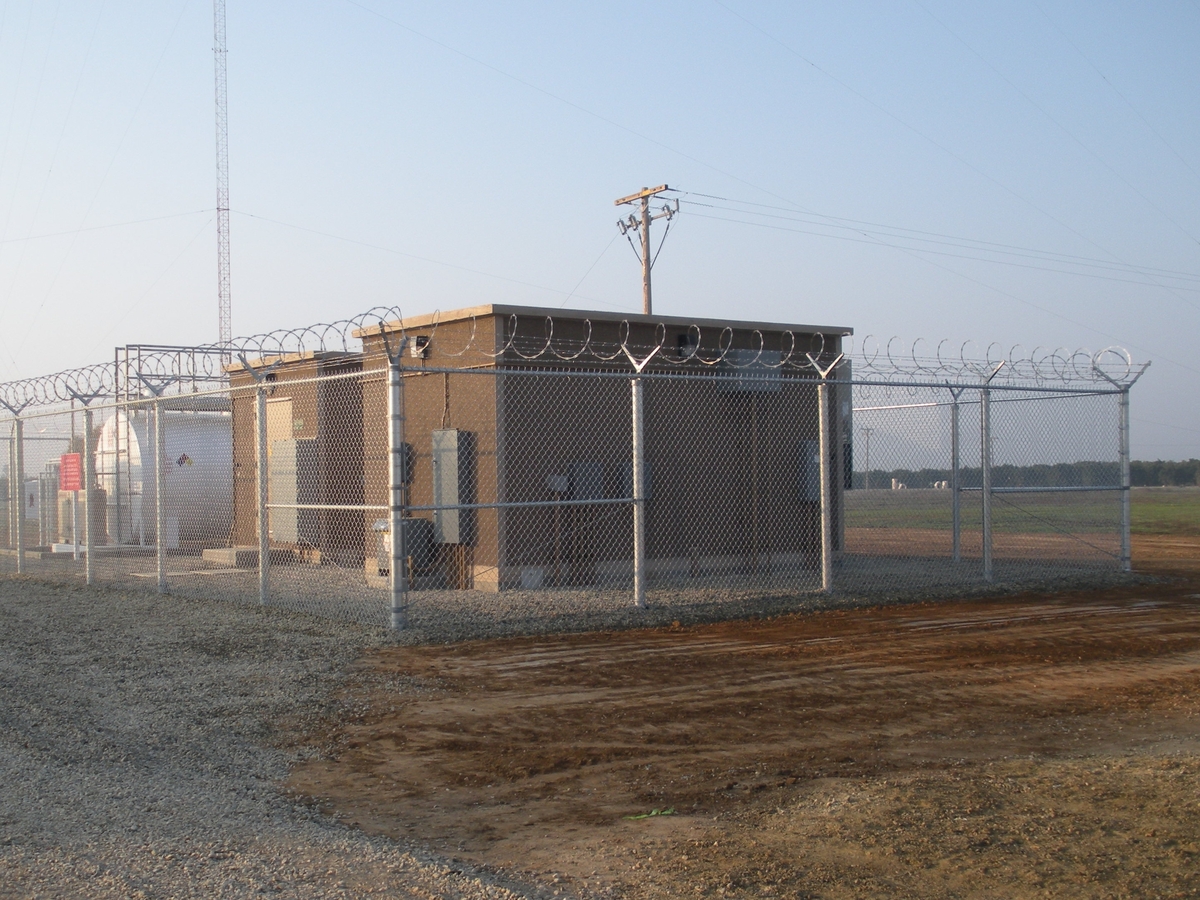 FEMA has constructed new buildings known as Primary Entry Point Stations, like this one in Fresno, Calif., to support the nation's Emergency Alert System.

There are giant turntables here, poised to broadcast the most natural of things for the end of times: "A church program, I believe, that we had recorded in 1955," Dowd explains, lifting a dusty vinyl record up off the spindle.

A Lesson From Hurricane Katrina

Needless to say, the bunker has never been needed. As the Cold War ended, dozens of them across the country collected dust until the mid-1990s, when the national Emergency Alert System was expanded and a new wave of radio stations got emergency shelters designed to withstand an enemy attack.

Then Hurricane Katrina hit the Gulf of Mexico. While other radio and TV stations went silent, WWL in New Orleans went into its bunker.

"That served as kind of a staple in the community and a source of information for citizens when a number of the other broadcast facilities were off the air," says Antwane Johnson, who heads the emergency public alerts and warnings program for the Federal Emergency Management Agency.

After Katrina, Johnson says, FEMA realized the main reason for these doomsday bunkers was probably not an enemy missile anymore, but Mother Nature. Millions of federal dollars have since built a network of nearly 80 high-tech emergency shelters, known as Primary Entry Point Stations, to withstand hurricanes, tornadoes, solar flares — even a freak electromagnetic pulse that could cripple the nation's power grid.

Welcome To The 'TNT Area,' Home Of The Mothman

FEMA keeps the technical details under wraps, but Dowd leads me outside to see WBT's new emergency shelter. It's actually made up of two aboveground sheds fortified by some kind of vacuum seal and very heavy doors.

"Now, for giggles and grins, turn your cellphone on and see if you can get any signal," Dowd urges.

No signal. The point is clear: A 21st century doomsday calls for lots more than dusty turntables and survival crackers in a cinder block basement.