Accessibility links
For The Publicly Traded, Going Private Can Be Risky Business Going public is typically considered an achievement. But reverting to private ownership — as computer giant Dell plans to do — can have benefits, too, like enabling managers to focus on long-term strategies or conduct shake-ups in private. Still, withdrawing from the stock market also carries some risks. 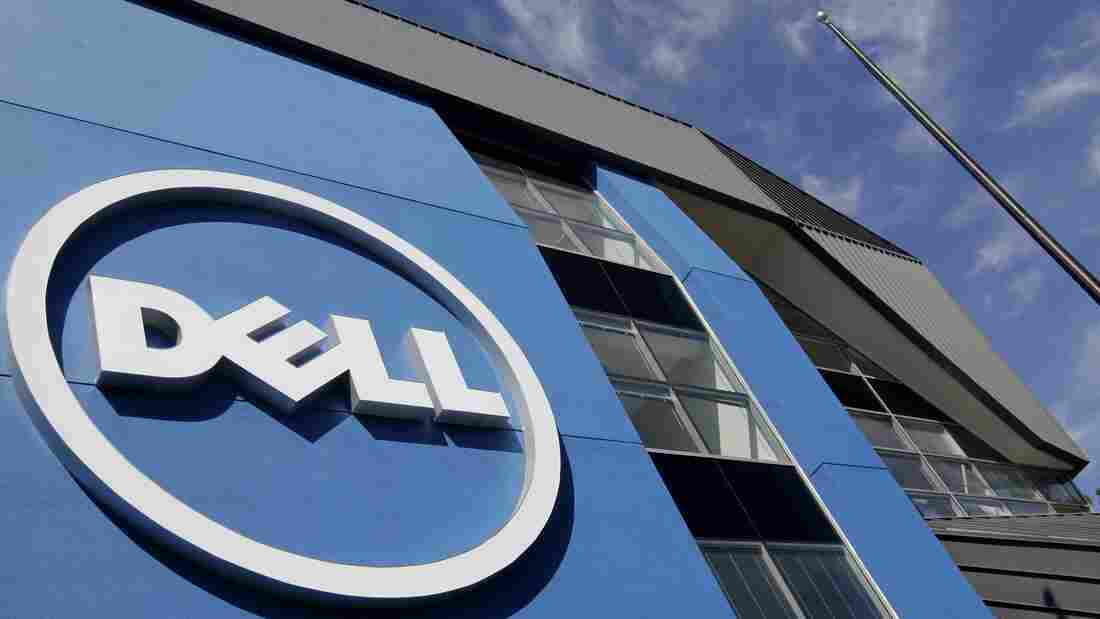 Dell's founder and another tech company have announced plans to take the computer giant private. While companies can benefit from withdrawing from the stock market, there are potential pitfalls as well. Paul Sakuma/AP hide caption

It's been a busy month for corporate America.

American Airlines and U.S. Airways announced plans to merge, Comcast bought the rest of NBCUniversal, Warren Buffett and Brazilian firm 3G are taking Heinz private. And Michael Dell, the founder of the computer company that bears his name, led a group that wants to buy the company back from investors for more than $24 billion.

But why would a company want to leave Wall Street and go back to being privately held?

The people who initiated the process to take the business private can have their offer topped. They can lose control of the process.

For Dell, the computer industry has changed dramatically. Consumers now want to buy sleek tablets and use cloud computing. Dell needs to change its business, but when you're a company traded on Wall Street, change can be hard.

"You have shareholders who sometimes have short-term interests," says Steven Davidoff, a law professor at Ohio State University. "They're not looking to hold their shares for years. They often sell on fear."

Going private can remove that pressure from shareholders who want results now.

Michael Dell suggested as much in a statement earlier this month, saying the deal will help his company continue "the execution of our long-term strategy and focus on delivering best-in-class solutions to our customers as a private enterprise."

Kevin Callaghan, managing director at Berkshire Partners, a private equity firm in Boston, has helped a handful of companies go private over the years. When a company needs to make radical change, he says, achieving it can be easier out of the public eye.

"[It] might mean that they forgo some sales for a few quarters or a couple of years," Callaghan says. "It might mean they have to exit businesses they're in."

But it's not just struggling companies that opt to leave Wall Street, he says. For some, it just doesn't make sense to be publicly traded. It's a lot of work to comply with rules and requirements. If a business is not growing much, the markets might not give it much attention. Or its management might think it's worth more than investors give it credit for.

At that point, a company might come to a private equity guy like Callaghan and say, "Hey, I'm thinking of going private."

Not that it happens often, Callaghan says. "It's a decision that companies take very, very seriously and very, very rarely, I would say."

And there are risks. For founders and management trying to buy back the company, there's the danger of other bidders' counteroffers, for instance.

"The people who initiated the process to take the business private can have their offer topped," Callaghan says. "They can lose control of the process."

There are other potential pitfalls, too. Jeffrey Pfeffer, a professor of organizational behavior at Stanford Business School, says management and founders sometimes overestimate their ability to turn things around.

"A lot of this is associated with hubris or pride," Pfeffer says. "You think you know better. You think you're smarter than the world."

Shifts To Private Ownership Ticking Back Up

But wise or not, expect more companies to follow Dell and Heinz down the path of private ownership. Before the Great Recession, about a quarter of deals were so-called leveraged buyouts that took companies private. In recent years, that number has been about 10 percent, but things are starting to pick back up.

Stefan Selig, executive vice chairman at Bank of America Merrill Lynch, has been involved in most of the high-profile deals lately. February, he says, "has been the biggest month in a long time."

The start of this year has seen a 144 percent increase in the number of U.S. mergers and acquisitions versus the same period last year, according to analytics firm Dealogic.

Selig says the combination of plentiful capital, low interest rates and pent-up demand is fueling all these deals.

But favorable conditions aside, investors still have to like the terms. Some think Dell is worth more than the offer on the table. Likewise, some wonder why Heinz didn't look for other suitors before agreeing to the Warren Buffett-3G deal. To get off Wall Street, you still need Wall Street's approval.