Accessibility links
A West Bank Story, Told Through Palestinian Eyes Palestinian Emad Burnat got a video camera to document his son's childhood. But he has spent the past several years filming the conflict between Palestinian residents of his village and Israelis who are building a separation barrier. His work is now up for an Oscar. 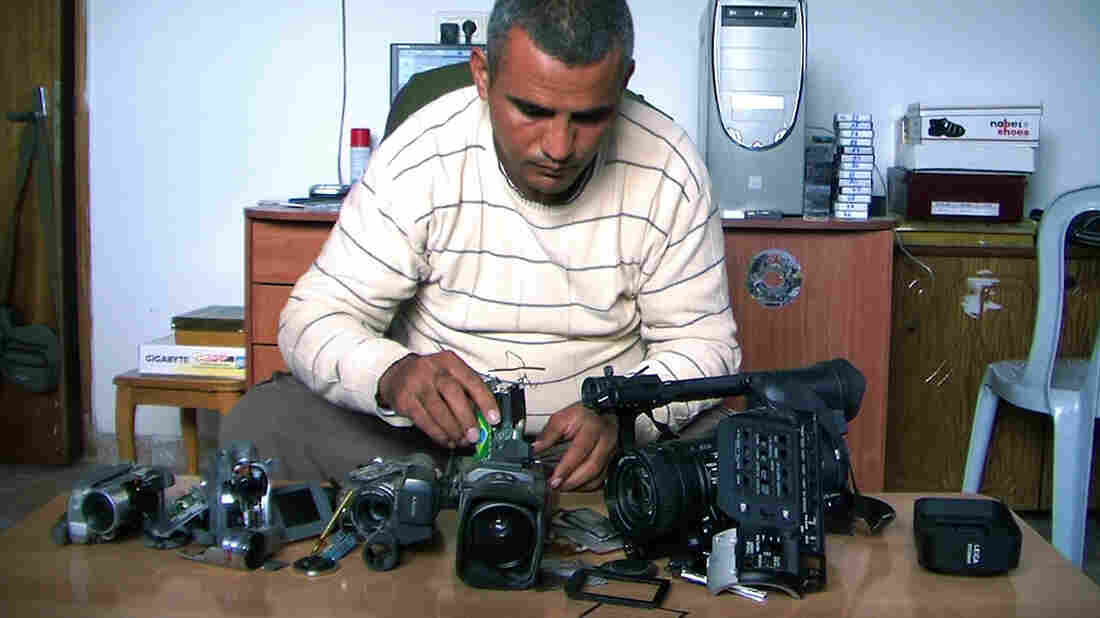 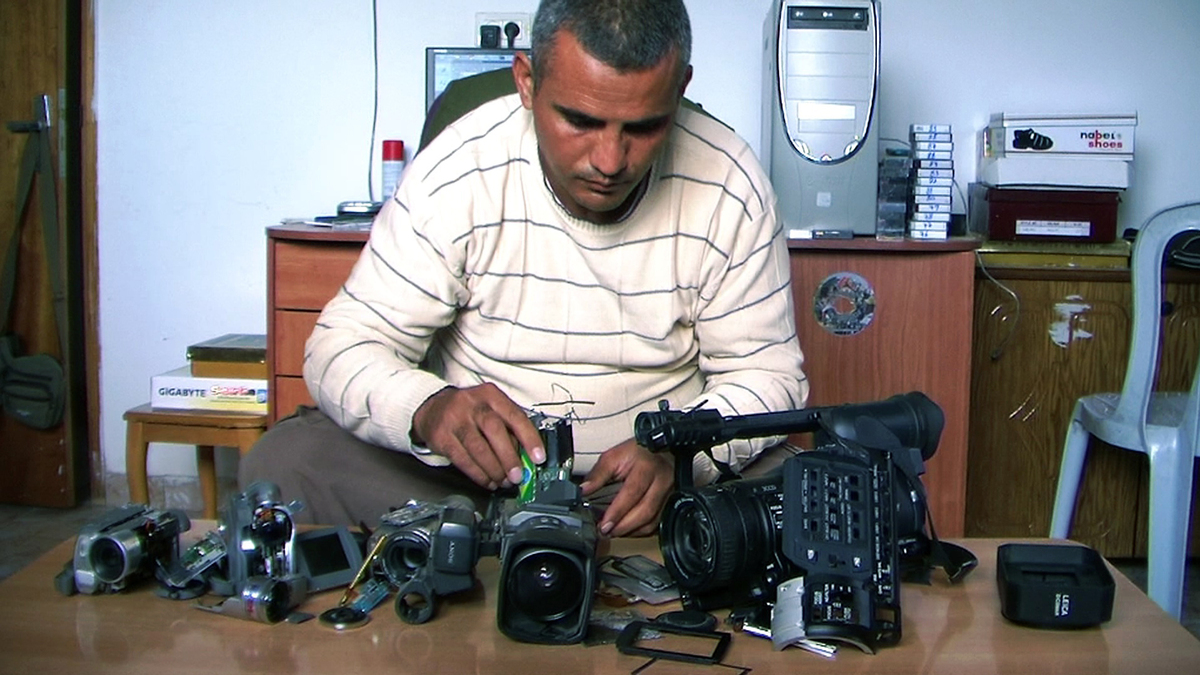 Emad Burnat, a Palestinian who co-directed the Oscar-nominated documentary 5 Broken Cameras, displays the cameras destroyed by Israeli settlers and security forces. The film focuses on a Palestinian village protesting Israel's separation barrier in the West Bank.

The Academy Award-nominated documentary 5 Broken Cameras tells the story of Bil'in, a modest Palestinian village perilously close to an Israeli settlement in the West Bank.

After the Israeli government began putting up its West Bank separation barrier, Bil'in resident Emad Burnat picked up a video camera, and in 2005 began a multiyear documentary project.

Israelis say the barrier has been successful in preventing Palestinian attacks, including suicide bombings. Palestinians argue that the barrier has cut them off from agricultural land and effectively serves as a border slicing through territory the Palestinians believe should be part of a future state.

While many Palestinians have taken part in protests against the barrier, Bil'in became known as the place where residents staged regular demonstrations every Friday, and there were often clashes between the protesters and Israeli troops.

The soft-spoken Burnat narrates the story, seen through the lens of a camera he originally got to document his youngest son's childhood. As the protest movement against the barrier grows, the film project consumes Burnat as he documents years of resistance. Bil'in residents say it cuts them off from farm land they need to cultivate.

After filming for several years, Burnat contacted Israeli filmmaker Guy Davidi, who helped Burnat put the film together. They are listed as co-directors.

Burnat's cameras capture the regular demonstrations — and the response by Israeli troops.

During the course of the film, several Palestinians are killed by gunfire, one of them a close friend of Burnat's. The filmmaker also loses five cameras in the clashes — they are smashed by Israeli settlers, and hit by a tear gas canister and by bullets from the security forces.

"The soldiers shot me very close," he says in the film.

Unlike his camera, Emad Burnat escaped that encounter. He still lives in a small house in Bil'in, and the five broken cameras are on display on a small table in his living room.

"So the two bullets hit the camera, and one of these bullets is still inside this camera," he says. "So I feel that this camera saved my life." 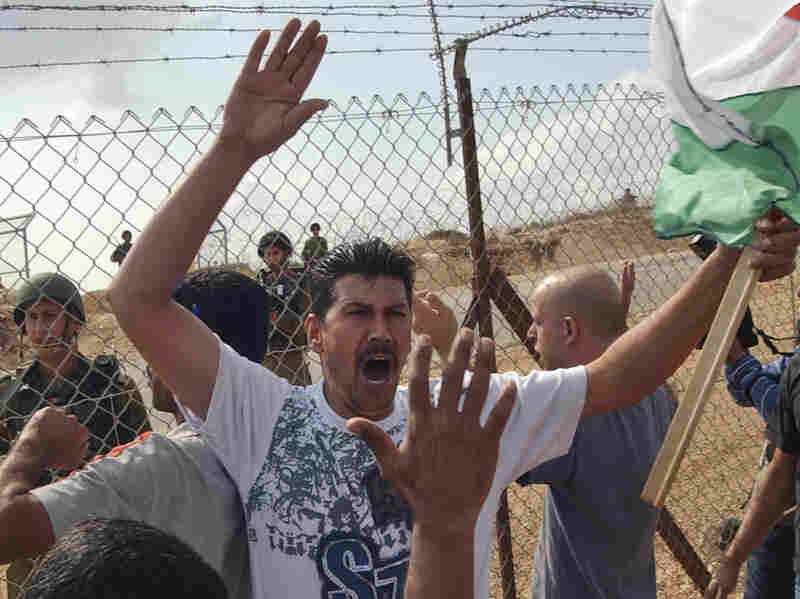 With Israeli soldiers on the other side, Palestinians protest against Israel's West Bank separation barrier in the town of Bil'in in 2008. Majdi Mohammed /AP hide caption 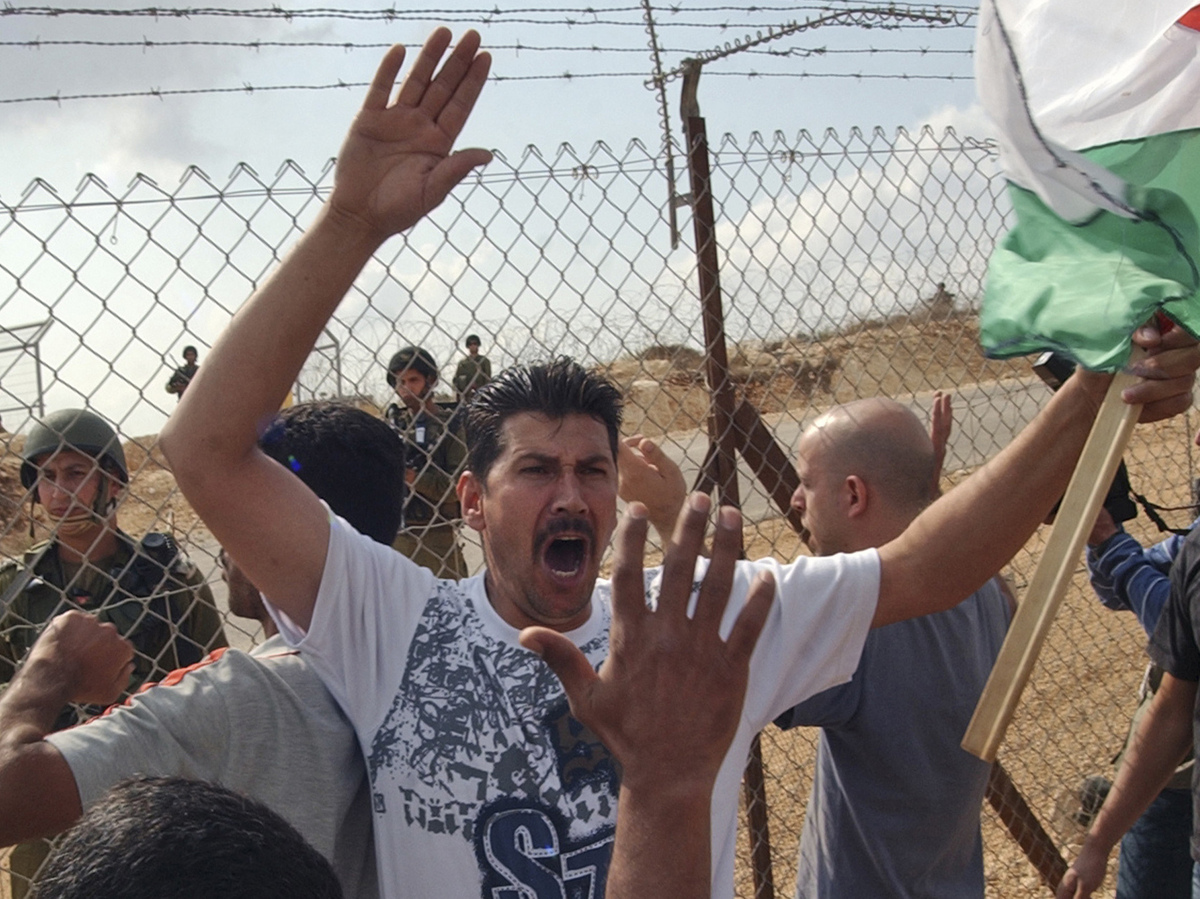 With Israeli soldiers on the other side, Palestinians protest against Israel's West Bank separation barrier in the town of Bil'in in 2008.

Burnat sometimes feels protected by his camera and his status as a journalist. But as the film shows, his footage rallied support for Bil'in all over the world. And that turned Burnat into a target for attacks from settlers and soldiers.

"There's more focus on you when you have a camera," he says.

Whether or not Burnat wins the Oscar for best documentary, the movement he chronicles has made gains. A court case forced the Israeli government to move the fence off of some of the village's agricultural land.

"This land was before on the Israeli side," he notes.

Burnat takes us out to an open hillside, which used to be on the settlers' side of the fence. The Palestinian villagers are terracing the land; they've built a playground and are planting crops. But their victory was a limited one.

The Jewish settlement of Modi'in Ilit continues to grow on the other side of the wall, on land the Palestinians want for a future state. You can still hear and see equipment working on new units.

The film is unabashedly pro-Palestinian, an indictment of Israel's settlement policy that never examines either the settlers' claims or the security forces' point of view.

Jewish settler groups often complain they are the victims of misinformation from both liberal Israeli and foreign, left-wing groups, which have trained a battalion of Palestinians in how to document the confrontations.

"To some degree, the conflict in Judea and Samaria [the West Bank] has become a camera war," says Anav Silverman, who works with the Tazpit News Agency.

The group tries to document the settlers' side of the story, by collecting video that they say shows Palestinians acting out against soldiers and settlers.

There are daily reports in the Israeli media of small clashes over land. Often, those claims focus on symbolically potent olive trees. The Palestinians say their trees are frequently cut down by settlers.

But Tazpit director Amotz Eyal shows me video and photos that he insists show that Palestinians burn and cut trees themselves.

Tazpit is helping more settlers get their footage into the news. The group says coverage is getting more balanced, thanks to their efforts.

Meanwhile, the next generation of Palestinians and their supporters is getting into the abuse-documentation business. That includes young people like 20-year-old Hamza Suleiman, who lives with his parents, grandmother and sisters in Bil'in.

Suleiman says that Israeli soldiers are more frightened of cameras than of the stones that are often thrown at them. But his camera work has already cost him and his family. He's been hit by gunfire and spent 11 months in prison. His mother, Fatima, says she wishes he'd put the camera away.

It's a complaint that Emad Burnat's wife also makes during 5 Broken Cameras, as she questions the price her family must pay for his project.

'No To The Fence'