Accessibility links
Hollywood Jobs 2013: For Film Set Decorators, Tiny Details Count On a movie set, every piece of furniture, wall hanging or bit of desktop clutter that an actor doesn't touch is chosen by the film's set decorator. For her annual Oscar-season series on Hollywood jobs, NPR's Susan Stamberg follows a handful of these decorators from prep through "Action!" 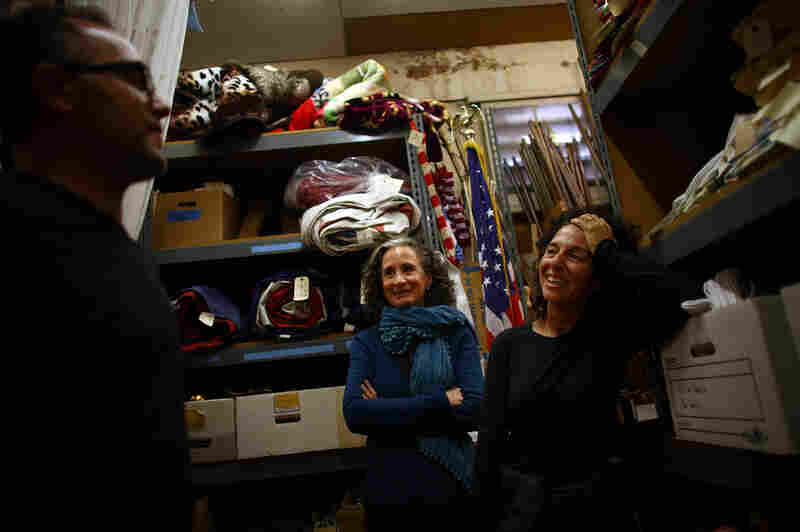 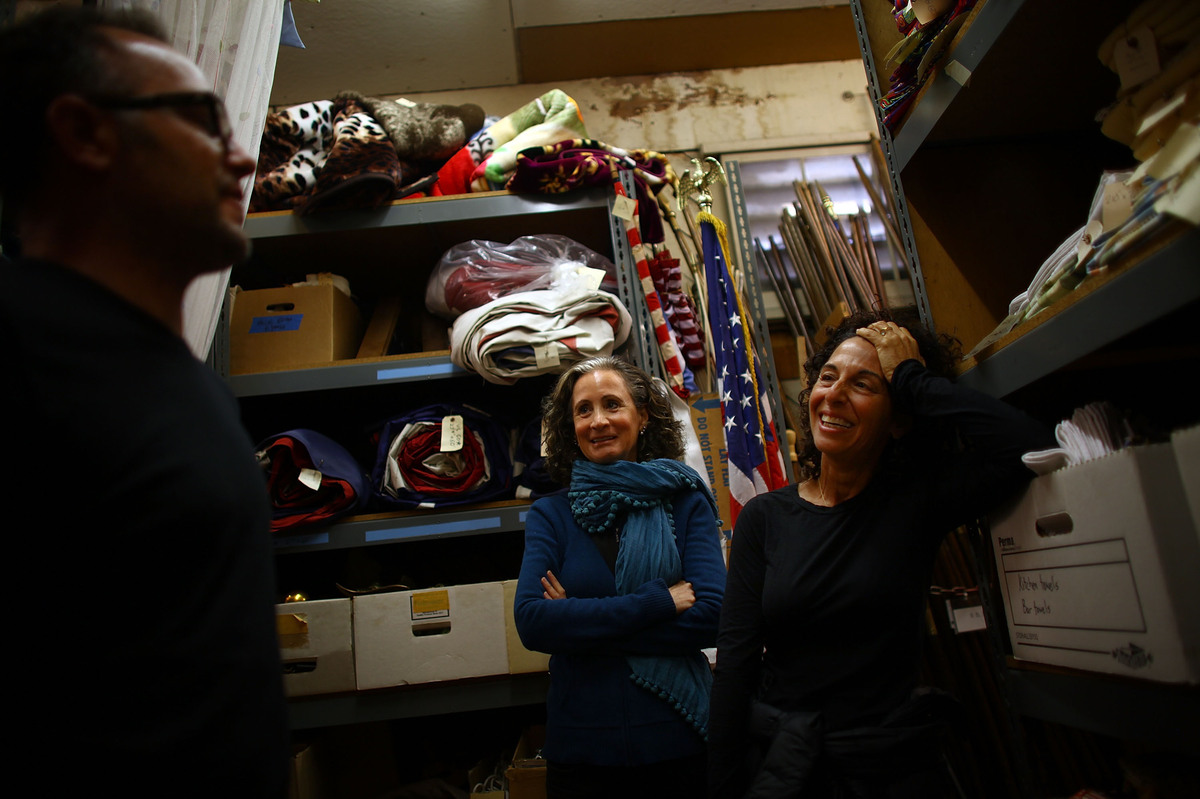 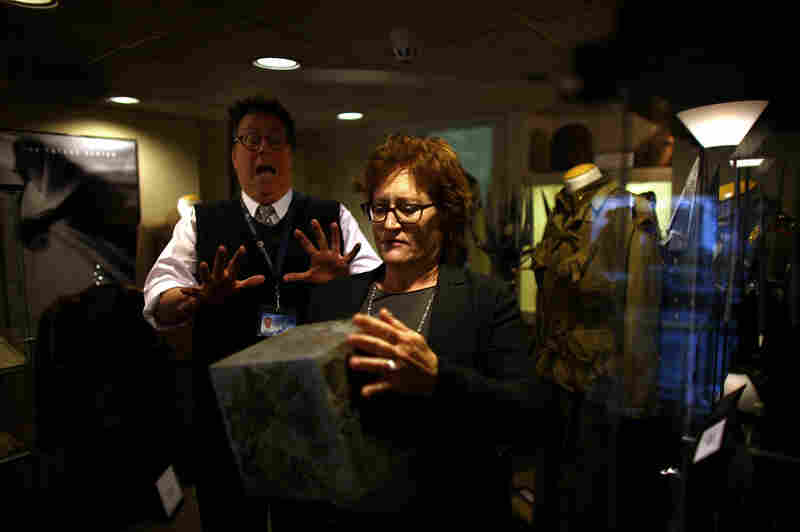 Randall Thropp, a Paramount archivist, recoils in mock fear from the power of the AllSpark as set decorator Rosemary Brandenburg takes it from the glass case. The AllSpark was used as a prop in Transformers; it may have another life in an upcoming sequel. David Gilkey/NPR hide caption 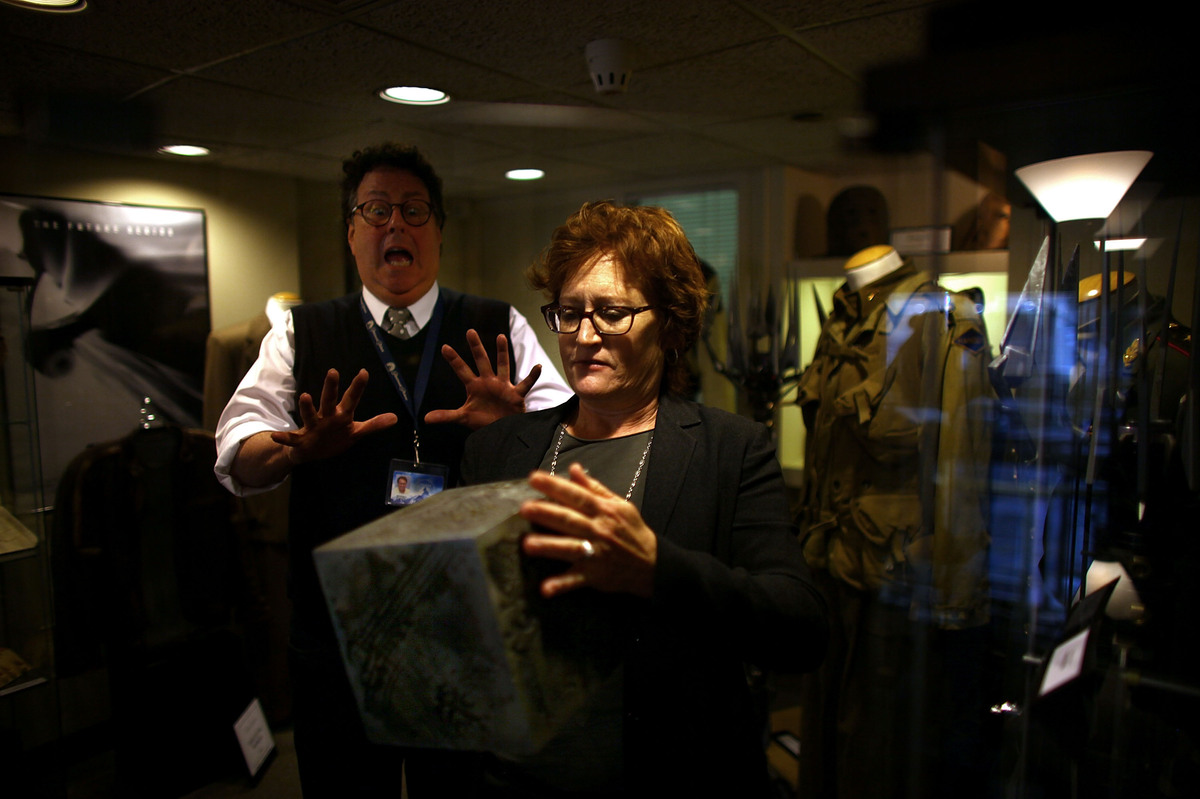 Randall Thropp, a Paramount archivist, recoils in mock fear from the power of the AllSpark as set decorator Rosemary Brandenburg takes it from the glass case. The AllSpark was used as a prop in Transformers; it may have another life in an upcoming sequel. 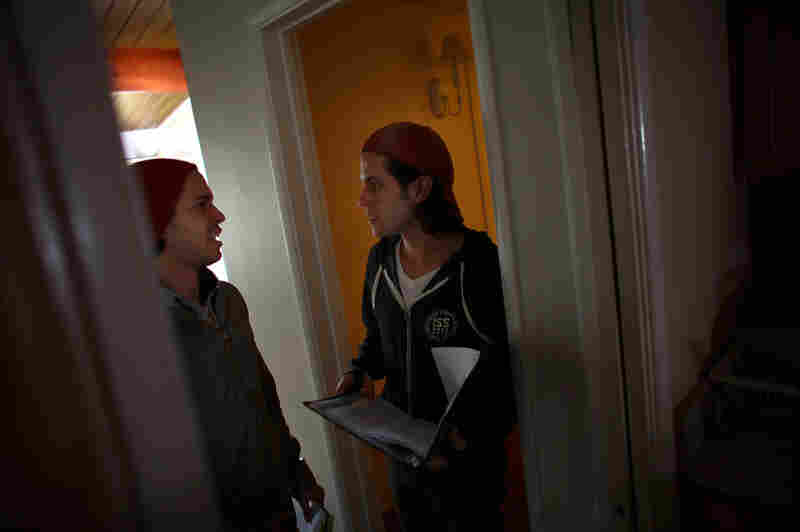 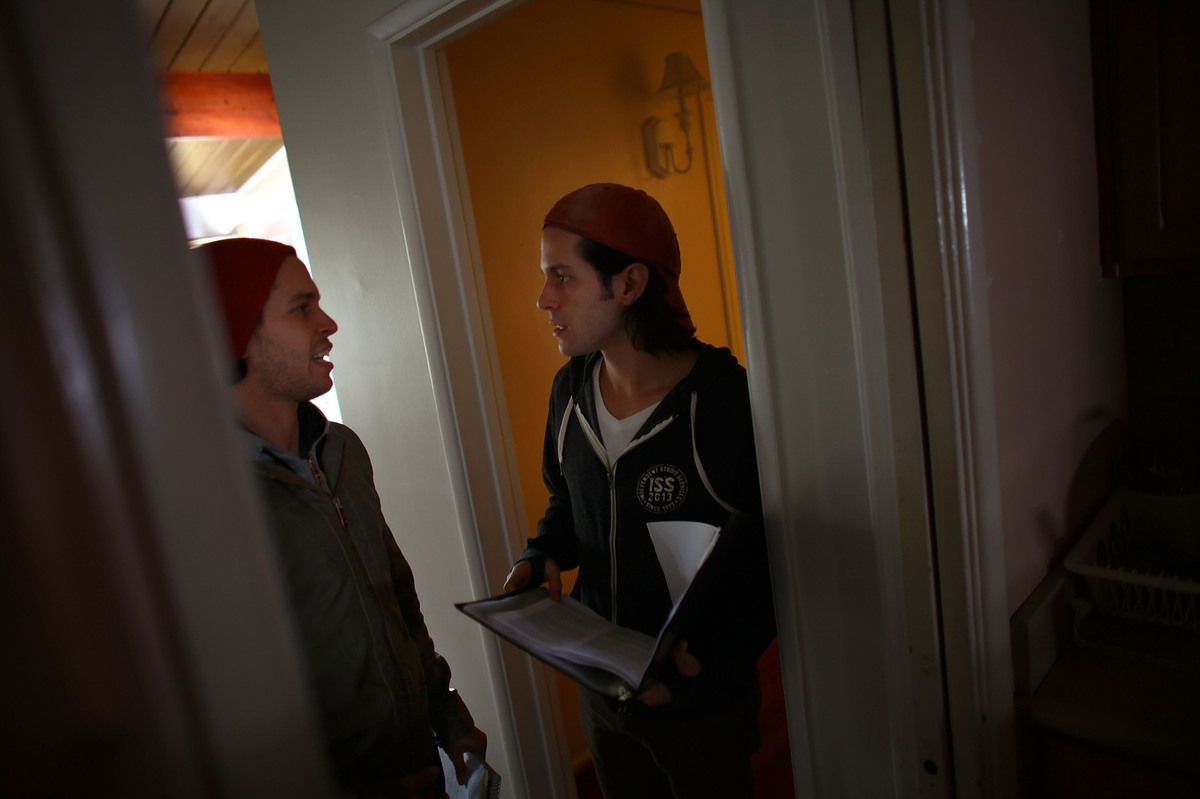 Picture Rick's smoky cafe in Casablanca, Lincoln's office at the White House of the 1860s, or the Mos Eisley cantina on the desert planet of Tatooine: A production designer came up with the overall look of those movie sets. But the booze on Rick's bar or the pens on Lincoln's desk — it took a set decorator and a crew to make them look authentic and believable.

On a recent chilly winter day in the backyard of a pretty picket-fenced house in Los Angeles, one set decorator is making rosebushes bloom again. Karen O'Hara, along with one of her set dressers, is wiring in white and yellow silk roses to add color to the barren flora. It will only be seen behind an actress when filming begins on location the next day. It's for the movie Walk of Shame, starring James Marsden and Elizabeth Banks. (Don't worry, no bushes were harmed in the making of this movie.)

This is nothing, says O'Hara. Once, a cast and crew went on location in Burlington, Vt., traveling to capture the glorious New England fall foliage. But autumn didn't arrive on schedule.

"So what did we do?" O'Hara says. "We flew in fall leaves, and people were way up and wiring those leaves into the trees."

Leaves, roses? Piece of cake! (Sometimes cake's a part of the set, too). Set decorators have many ways to find the objects that make their movies feel real. In particular, they rely on rental facilities like the Warner Brothers Prop House in Burbank, Calif. It has four floors — each the size of a football field. It's like walking through the furniture department of the biggest department store you've ever seen.

There's hospital and medical equipment (and dummy dead bodies) in the basement. On the upper floors there's contemporary furniture, antiques, chandeliers, draperies, flags, artwork, statues, kitchen and bath stuff — you name it, they have it.

"Everything you see on TV and film," says manager and former set decorator Robert Greenfield, "we have at least one of them."

Tagging And Dragging, To Build A Sense Of Identity

Lauri Gaffin is the set decorator for an upcoming film about artificial intelligence starring Johnny Depp. She's scouting today for an iron bed, a big flag, a couch and other items on her list. She has to fill 85 sets for this film, including rooms in a house.

"Each piece in the house represents who [the characters] are," says Gaffin. "What do they collect, what kind of food do they eat? That's not all written in the script; we create that. So you have to interpret it by communicating with the director and production designer, what their vision is."

"I've used this chair in every movie I've ever done," she says. She lists some of them — the first two Iron Man films, The Pursuit of Happyness. It's an easily recognizable Eames lounge chair with brown leather cushions and molded plywood.

"People see it and they understand what it is — a comfortable, lived in, loved chair," Gaffin says. She slaps a claim tag on it before someone else does. In the business, this ritual is called "Tag and Drag."

Gaffin has brought part of her team with her, including the lead man, Anthony Carlino. He's not the star of the film; the "lead man" works under the set decorator and hires set dressers, the folks who schlep and put together all the stuff on the set. The lead man also figures out the logistics of getting everything onto the set.

Say a decorator picks out a huge desk, but the elevator on location in an old building is only 4 feet wide. "A lot of times," says Carlino, "we'll rent cranes or big lifts that we can actually bring it from outside and put it through a window."

But what if the characters are Nordic gods and you have to create a banquet scene with a 30-foot-long table? Gaffin met that challenge in the 2011 film Thor. She and fellow set decorator Florence Fellman (who's also working with Gaffin on this latest film) were looking for carving utensils for the gods. 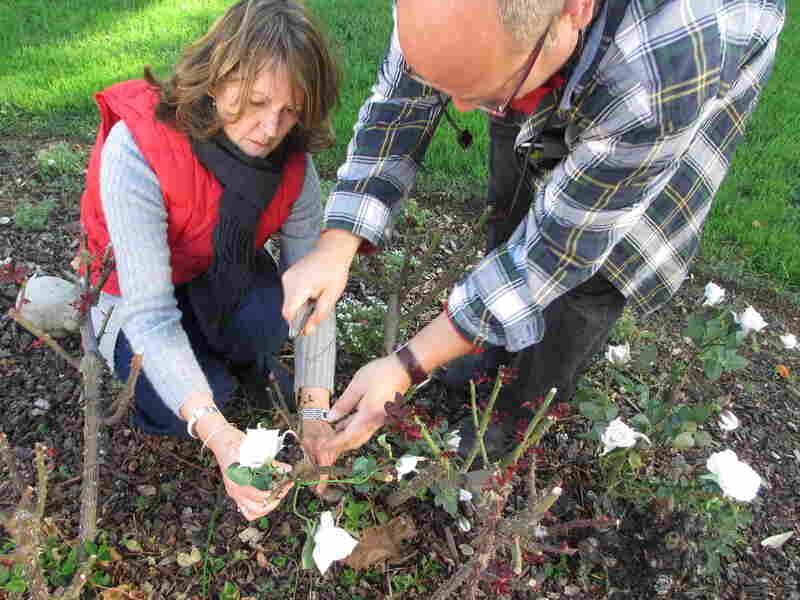 Karen O'Hara, along with one of her set dressers, wires white and yellow silk flowers to the canes of a dormant rosebush in a Los Angeles backyard. Cindy Carpien/NPR hide caption 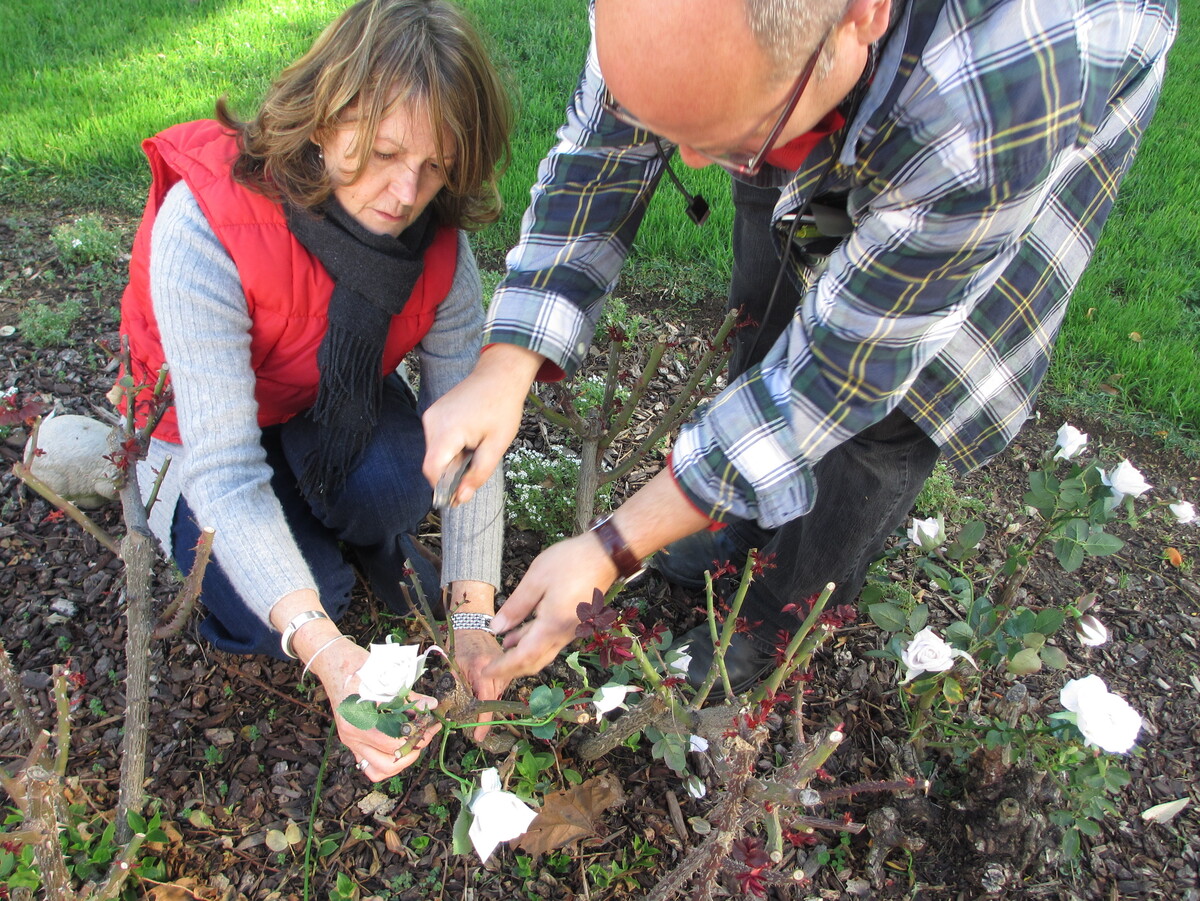 Karen O'Hara, along with one of her set dressers, wires white and yellow silk flowers to the canes of a dormant rosebush in a Los Angeles backyard.

They had to be big and shaped like reindeer bones. It was Christmastime, and Target was offering just what they needed at very inexpensive prices: foot-long faux carving sets.

"So we bought that for all our gods and goddesses," Fellman says. The banquet scene was very brief, and the audience would certainly be unaware of all the detail that went into the set. But according to Fellman, "Our job on the movie is creating a history that the audience can perceive in just a few seconds."

Sometimes, objects have to be made for a film by Hollywood's many artisans. Some of these pieces are housed and protected at the Paramount Studios Archives in Hollywood. There's a faux Russian nuclear launch device and a telephone from Mission: Impossible — Ghost Protocol, along with various items from the Transformers films, including an 8-inch cube made to look metallic — it's really a wooden box — and patterned with wavy lines and mysterious symbols. It's called the AllSpark Cube, introduced in Transformers (2007) as the key to the robot alien civilization.

"Some people call it the MacGuffin of the movie, which means the thing that drives the plot," says Rosemary Brandenburg, the set decorator on that film, who is now returning to work on the new Transformers, starring Mark Wahlberg.

A little movie factoid: The AllSpark Cube was technically a prop in the first Transformers, because an actor actually touched and even ran with it. Brandenburg thinks the cube might make a reappearance in Transformers 4 as set decoration. It's too early to tell. But archivist Randall Thropp says that unfortunately, she can't take the AllSpark and use it in the film.

"That is the only cube we have, right here," Thropp says. It resides in a glass showcase.

Brandenburg can borrow the cube and make copies, though. "A movie set is a pretty dangerous place for things," she says. "We have to repair things constantly. Our special-effects brothers and sisters are running around blowing things up, and our stunt brothers and sisters, too."

Brandenburg often has to make multiple copies of items because of all those blowups.

On Set With The Swing Gang, Getting Ready For 'Action'

Once the sets are complete and shooting begins, the set decorator keeps a watchful eye. In between takes, things might need adjustment.

On the set of a small indie film in a house in North Hollywood, the set decorating crew springs into action. A picture needs hanging, items need to be switched around.

These set dressers are also known as the swing gang. The term comes from the old days when filming schedules were much shorter. The only time to change sets over or prepare them would be on the opposite shift, or swing shift. But the job remains the same — they're the heavy lifters, riggers and gaffers.

This film, The Paper Boat, follows various characters making their way through Hollywood. It has a set decorating budget of a mere $25,000, compared with Rosemary Brandenburg's budget of over $1 million.

But some of the same tricks apply. Jeffrey Sun, lead man on this film, describes how a simple ashtray was prepared as set decoration — something that will barely be seen on camera.

"We sprinkle a little ash on top and put the cigarette butts in, and then we crumple them up a little at the tip so they look like they were just put out," Sun says.

The audio guy hovers over his control board. The cameraman peers through his lens. Set decorator and crew back off into corners. And the action begins. This basic sequence has been the backbone of moviemaking since the beginning. And the goal of the set decorator, always, is to have the movie star (and her audience) really believe it when she walks into a room.

"The truth is, a lot of what we do is creating surround for the actors," Brandenburg says. "I take that very seriously — making sure the actors feel like they can help build their characters out of what I provide."

The 'Hollywood Jobs' series is produced by Cindy Carpien and the NPR Multimedia team.