Accessibility links
Tina Brown's Must Reads: Post-Sept. 11 World Tina Brown, editor of the Daily Beast and Newsweek, joins NPR's Steve Inskeep for another round of reading recommendations. This month, she offers three picks that show how the world looks after the 2001 attacks. 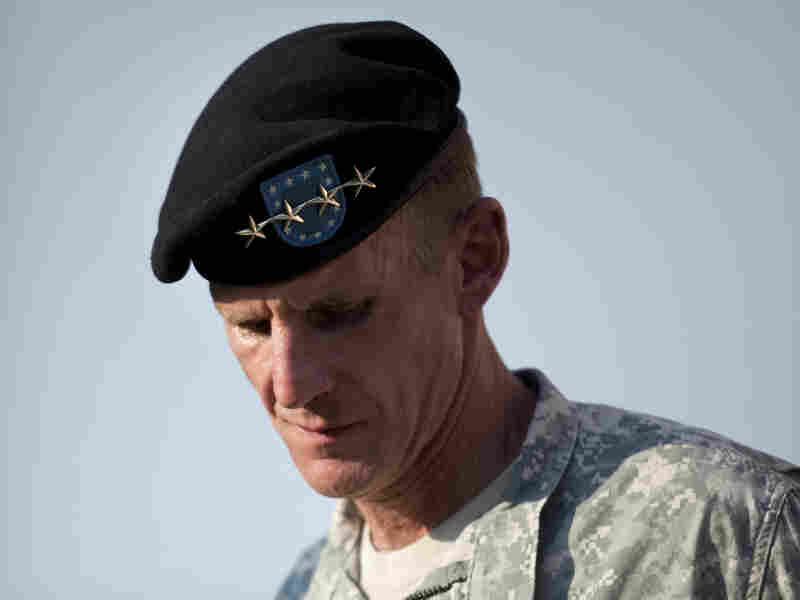 Gen. Stanley McChrystal during a retirement ceremony in 2010. His comments in a Rolling Stone interview helped lead to his resignation. Brendan Smialowski/Getty Images hide caption 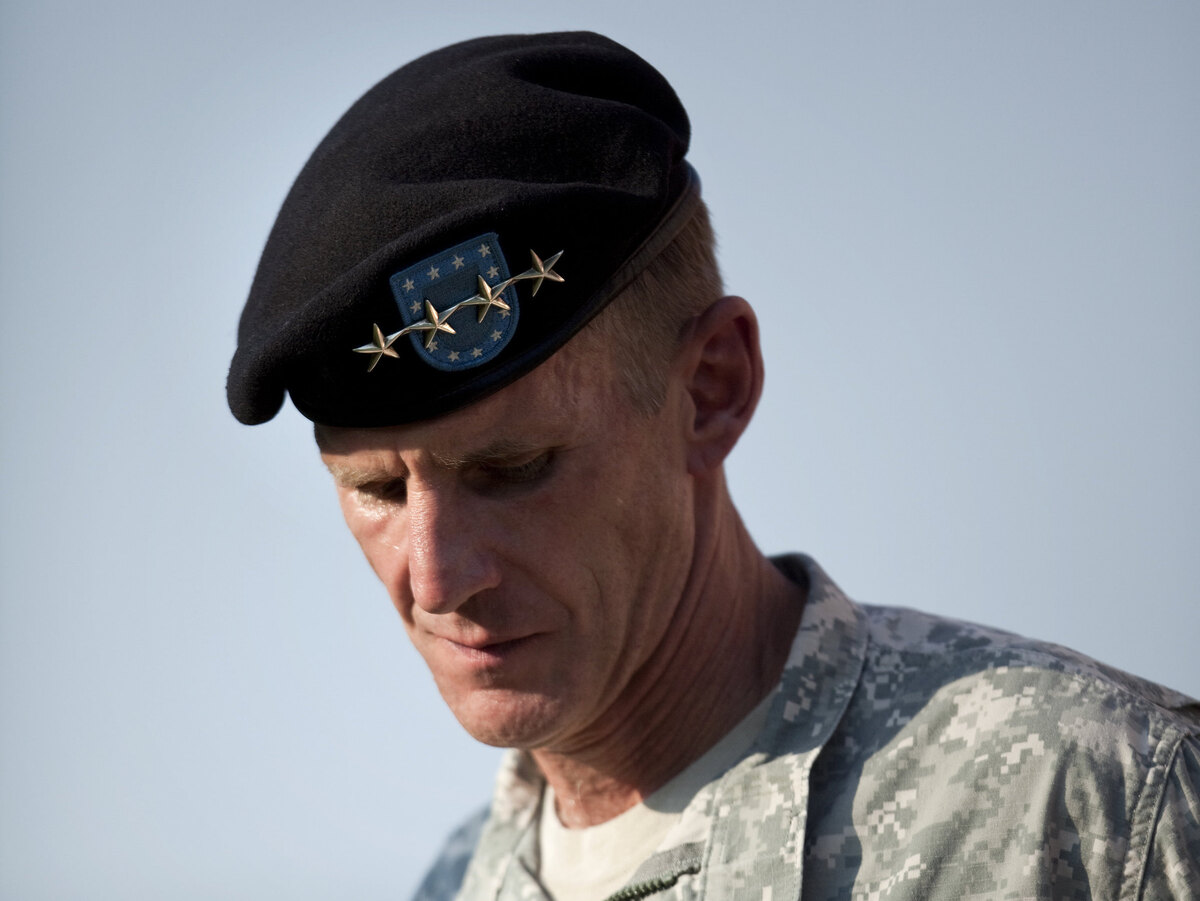 Gen. Stanley McChrystal during a retirement ceremony in 2010. His comments in a Rolling Stone interview helped lead to his resignation.

Tina Brown, editor of the Daily Beast and Newsweek, joins NPR's Steve Inskeep again for an occasional feature Morning Edition likes to call Word of Mouth. She tells us what she's been reading and gives us recommendations.

This month, Brown sent three recommendations that all deal with the post-Sept. 11 world — stories of Iraq, Afghanistan and Pakistan, and the military and political issues that shape the Middle East and the world at large.

A General Talks Back

Brown's first pick is a fiery interview with a man who fought in both of the major wars that emerged after the 2001 attacks, in Iraq and Afghanistan. That man is retired U.S. Army Gen. Stanley McChrystal, and he appears in a conversation with Foreign Affairs editor Gideon Rose in the March-April issue of that magazine. Brown calls the interview "absolutely riveting."

"It really gives an insight into the clarity of mind, the brilliant organizational, conceptual notion of how to run a war," Brown says.

McChrystal resigned from the Army in 2010, after a magazine profile in Rolling Stone quoted some less-than-flattering comments he had made about President Obama and other members of the U.S. executive branch. Brown says the controversy and others like it have ended the careers of great military leaders.

"This guy was hounded from his post by a misdemeanor that was blown up by social media," Brown says, "something we've really seen again from Gen. Allen's exit from commanding NATO. It's tragic. ... How many more of these great leaders can we lose, frankly, to social-media blowups?"

Brown says McChrystal's interview reveals his honest feelings about the war he helped lead and gives insight into his "F3EA" strategy of military raids in Iraq and Afghanistan: Find, Fix, Finish, Exploit and Analyze.

That strategy helped increase the number of such raids from 18 a month to 10 a night near the end of McChrystal's command in Iraq, Brown says.

"There are many reasons that he was able to [accomplish] this extraordinary upping the ante," Brown says. "One way was because, of course, of technology."

But McChrystal also sounds a cautionary note about overreliance on special ops forces.

"He also makes the very good point that special ops only works when you're relating [it] to the overall policy about the theater of war," Brown says.

McChrystal is concerned about the use of drones, Brown says.

"He's controversial in this piece," Brown says. "I mean, he really feels the drone can be overused. It may feel like a clean approach to war to the American side, but he says that on the other side, of course, it feels like war — it is war. And we have to understand that when we launch these drones." 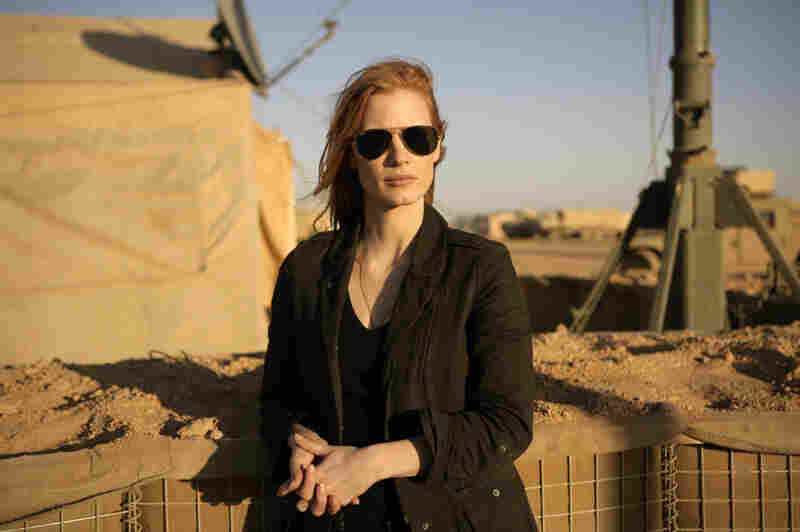 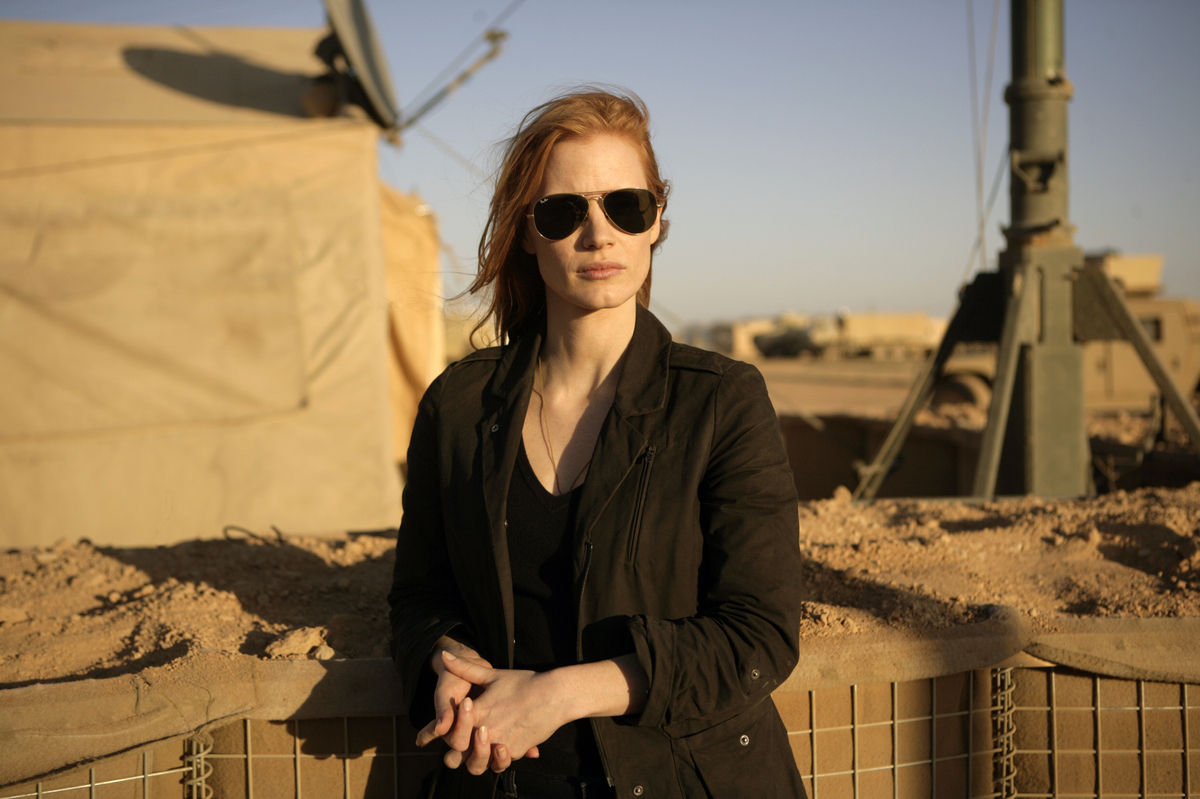 Jessica Chastain as CIA agent Maya in a scene from the film Zero Dark Thirty.

Brown's next pick is a Wall Street Journal piece that explores the real-life reporting behind the most famous special-operations raid in history. The piece looks at the Oscar-nominated film Zero Dark Thirty, whose director, Kathryn Bigelow, and screenwriter, Mark Boal, have come under fire for their portrayal of the events that led to the capture and killing of al-Qaida mastermind Osama bin Laden.

"It's a very interesting piece that explores the ethical and artistic issues of doing [what's] really a docudrama," Brown says.

The movie focuses on the tireless tracking efforts of fictional CIA agent Maya, played by Jessica Chastain. In reality, Brown points out, it was a group of agents who tracked bin Laden to his hideout in Abbottabad, Pakistan.

"They were known as 'The Sisterhood,' " Brown says. "There were many women, in fact, who were involved in the catching of bin Laden."

The piece also reviews how a political and public firestorm surrounding the film's depiction of torture could very well sink Zero Dark Thirty's Best Picture chances. "In the movie of course, Maya pushes one lead hardest," Brown says. "The film of course suggests that some information ... was the direct result of harsh interrogations — of torture, in short."

"A lot of people feel strongly that it was not so ... that, in fact, leads were not developed out of torture," Brown says. "But [former U.S. Defense Secretary and CIA Director] Leon Panetta has praised the movie and feels that the movie represents a kind of truth, and that's really what the controversy is about. But it certainly has shut Zero Dark Thirty out of the Best Picture awards at the Oscars." 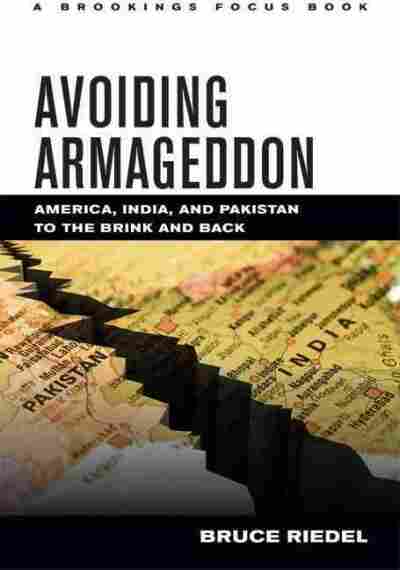 America, India, and Pakistan to the Brink and Back

Brown's final pick is a book that tackles the tricky and troubled relationship between India and Pakistan. Avoiding Armageddon: America, India and Pakistan to the Brink and Back is a new book by Bruce O. Riedel, a senior fellow at the Brookings Institution and a distinguished counterterrorism specialist who contributes to The Daily Beast.

"Riedel is one of the sharpest minds on all of these issues," Brown says. "He's a terrific analyst on what's going in this part of the world, and in fact he's been an adviser now to four presidents on the whole Afghanistan-Pakistan-South Asian region."

Riedel underlines the importance of the Pakistan-India relationship in understanding — and potentially solving — the ongoing conflict in the region.

"You can't really ignore India," Brown says. "The feelings between India and Pakistan, the long-existing rancor between them, is what stokes Pakistan in not embracing fully the extinguishing of the Taliban. Because they are always, in their minds, dealing with the much bigger threat of India."

"He's very, very good on that agency, and he's also very good on what he sees as the kind of internal politics that have thwarted things in this region," Brown says. "[Riedel] believes that Obama made a very big mistake when he appointed Richard Holbrooke as special representative for Afghanistan and Pakistan, because he says that the Indians didn't like Holbrooke."

Riedel writes that Holbrooke's efforts to advance American policy in the region could have created conflicts in India.

"[India] made it clear they didn't want to be a part of Holbrooke's agenda, and that has actually helped, he feels, to keep this tension going," Brown says.

Brown says both Riedel's book and McChrystal's interview underline how ongoing problems in the post-Sept. 11 world potentially could have been ameliorated through more nuanced policy in Afghanistan.

Read an excerpt of Avoiding Armageddon