Accessibility links
CNBC Adopts Tougher Tactic In Booking Wars CNBC is far and away the ratings leader in the financial cable news business — and its executives, producers and reporters are working hard to keep it that way. They're telling some guests they can't appear on rival channels amid breaking news. 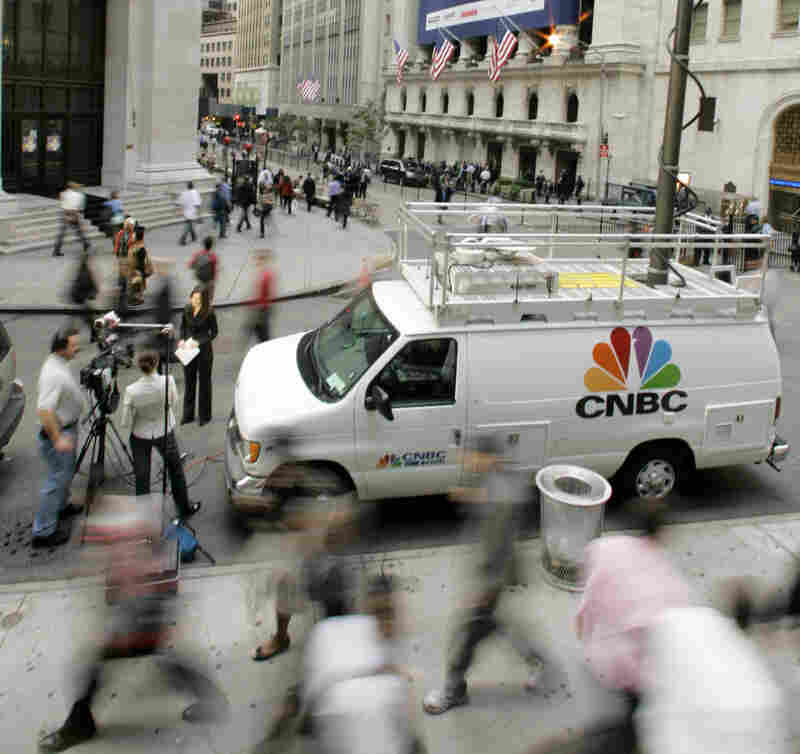 Morning rush hour commuters pass by a CNBC crew in front of the New York Stock Exchange in September 2006. The channel has adopted a policy that prohibits guests from appearing on rival channels amid breaking news. Mary Altaffer/AP hide caption 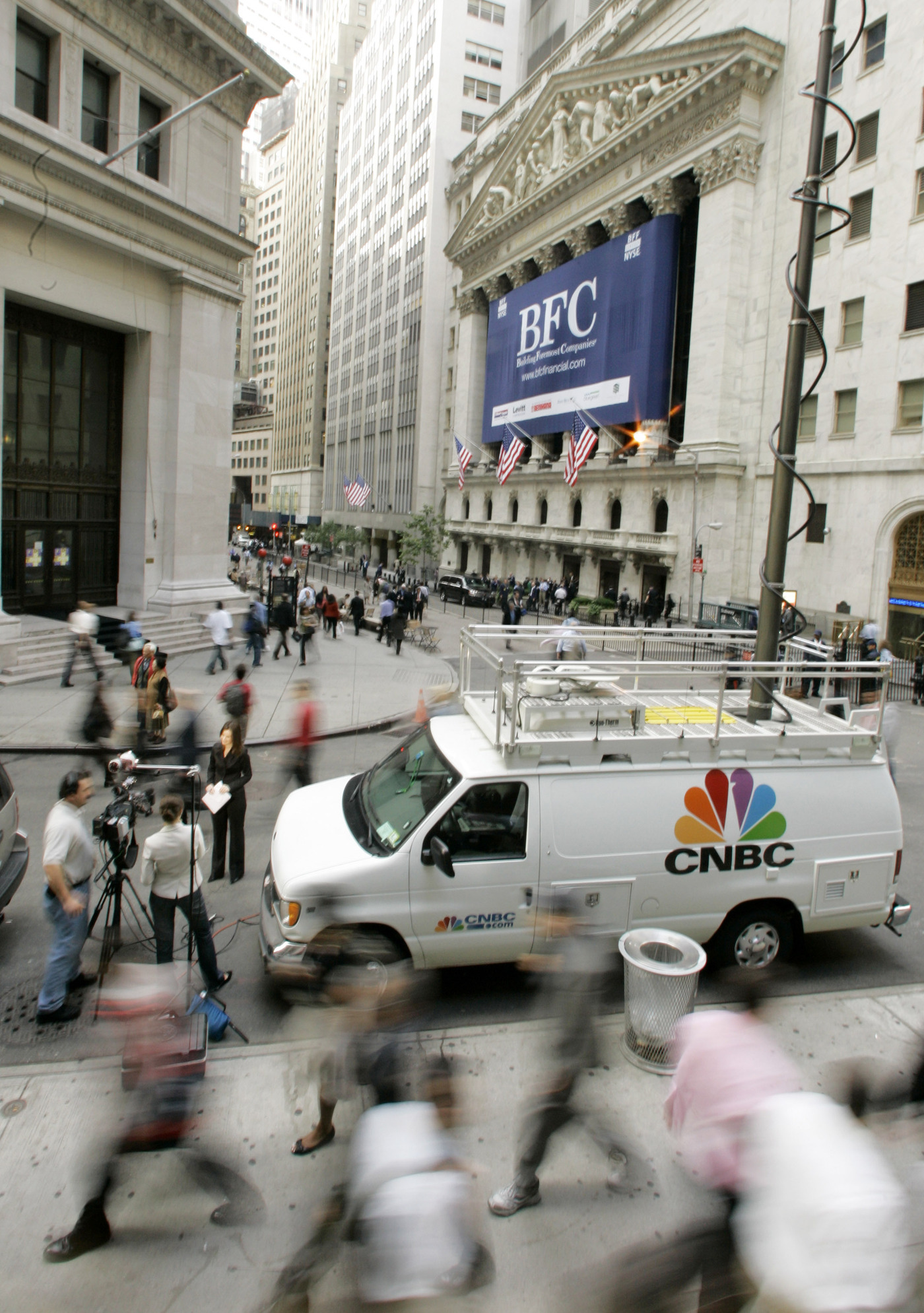 Morning rush hour commuters pass by a CNBC crew in front of the New York Stock Exchange in September 2006. The channel has adopted a policy that prohibits guests from appearing on rival channels amid breaking news.

CNBC is far and away the television ratings leader in the financial cable news business. Now, evidence arrives that its executives, producers and reporters are going to great lengths to maintain its status.

The channel has adopted a policy that prohibits guests from appearing on rival channels amid breaking news if they want to be seen by CNBC's larger audience.

The tension over the policy with one of its peers offers a window into the intensity of the cable battles over what's called booking — landing interviews with key financial players, commentators, insiders and analysts.

"Every network should be trying to hustle to get content that's distinctive to their channel," said Andrew Morse, president of Bloomberg Television's U.S. operations. "That's our job. We're in the news business."

But Morse said Bloomberg doesn't try to dictate who can appear elsewhere.

"We want to talk to the newsmaker," Morse said. "If there's news we also understand, though, that newsmakers need to get their information out. People aren't in the world of just consuming one source of news and information now."

Politico was first to report the policy last week. CNBC's top spokesman initially denied to Politico that any such explicit policy existed. But a guest interviewed on CNBC earlier this month shared with NPR a copy of an email from a CNBC producer.

It carried this warning in red:

"CNBC POLICY REMINDER: Per CNBC policy, we cannot use guests who have a same-day appearance on Fox Business or Bloomberg...By accepting a booking with CNBC, you acknowledge and accept the terms of this policy."

So much of broadcast news revolves around the booking — with the pressure on the booker to land the guest.

Bookers are a unique life form in the ecosystem of news gathering. They are often the snipers who sit waiting for their prey, drinking black coffee, smoking cigarettes and striking at the ideal moment."

"Bookers are a unique life form in the ecosystem of news gathering," said former top CNBC executive Jonathan Wald, now the executive producer of Piers Morgan Tonight on CNN. "They are often the snipers who sit waiting for their prey, drinking black coffee, smoking cigarettes and striking at the ideal moment."

Wald said that he has issued strict instructions that Morgan will not interview guests once they've appeared on certain other shows.

"You don't want to follow," Wald said, "and so you'll do whatever you can to impress upon the guest ... the need to be on your show or your network first."

She believed she had an exclusive — and was witnessed berating Iger's team minutes later as he walked to speak live by satellite with an anchor for Bloomberg TV.

Boorstin argued Iger could speak only to her network.

Several former CNBC producers told me that policy reflects a heightened competition because of new players in financial news TV. Bloomberg Television has become a more serious player in competing for major interviews, and News Corp. launched Fox Business Network five years ago. Last year, News Corp. allowed a partnership between The Wall Street Journal and CNBC to lapse, though its reporters sometimes still appear on its air.

CNBC had no official comment. But some executives there said Bloomberg reporters sometimes play fast and loose in claiming exclusives. Bloomberg's Trish Regan on Friday referred to an exclusive interview she had in speaking the evening before with billionaire investor Carl Icahn.

But Regan's off-camera interview was less exceptional than advertised. Icahn had also been interviewed by a CNBC reporter that Thursday night, and he appeared live on CNBC that Friday.

Privately, several CNBC executives ask: Why shouldn't they press their advantage with their new policy? After all, they said, they have a bigger television audience of investors, corporate executives, analysts and advertisers.

Meanwhile, Bloomberg's Morse said he has taken to poking CNBC by slapping up a caption that says "FIRST ON BLOOMBERG" over an interview — regardless of whether the guest has appeared elsewhere.

The caption is literally true: It marks the first time that person appeared on Bloomberg TV that day.

But that gibe is sure to fly over the heads of viewers — and to drive rival news organizations nuts.