Accessibility links
After Long Isolation, Myanmar Now Has Suitors Myanmar's contacts with the world are now expanding rapidly. President Obama's visit last November was a sign of that shift. And China is building major oil and gas pipelines that link the two countries. 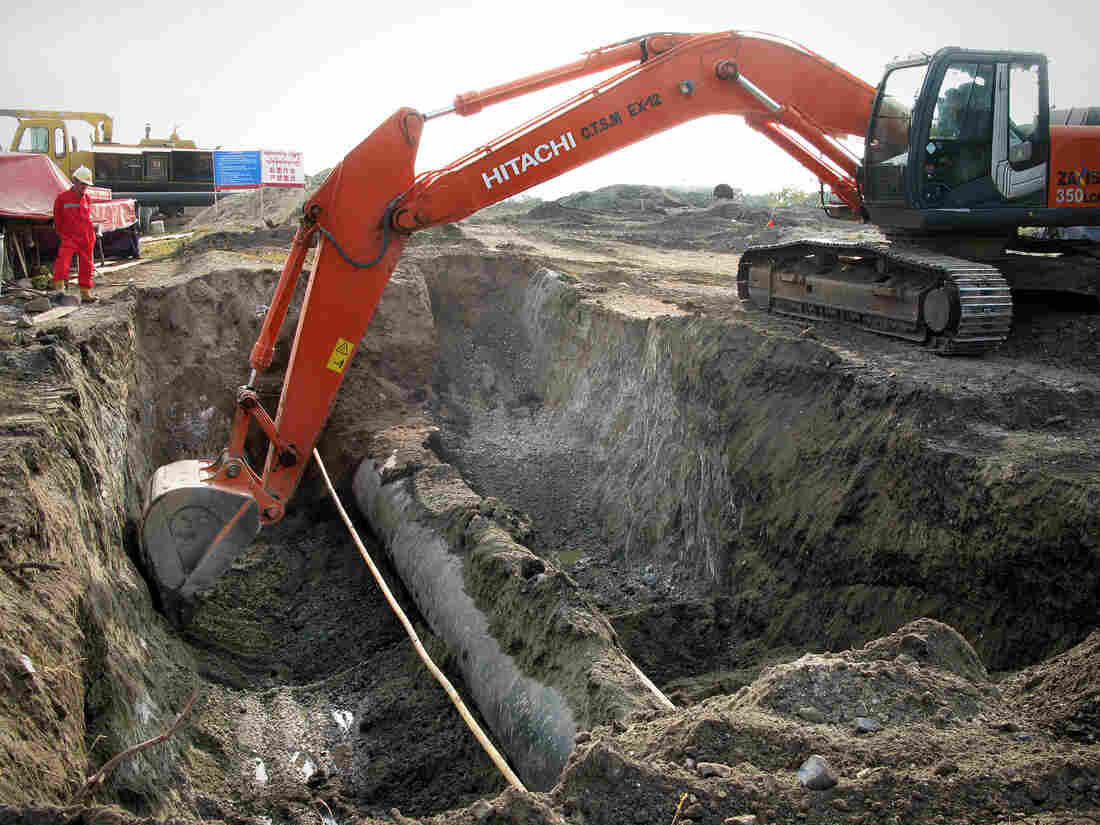 Engineers from China and Myanmar work to bury an oil pipeline outside the Myanmar city of Mandalay. Chinese media reports say the 700-mile-long oil and gas pipelines will be completed in May. Anthony Kuhn/NPR hide caption 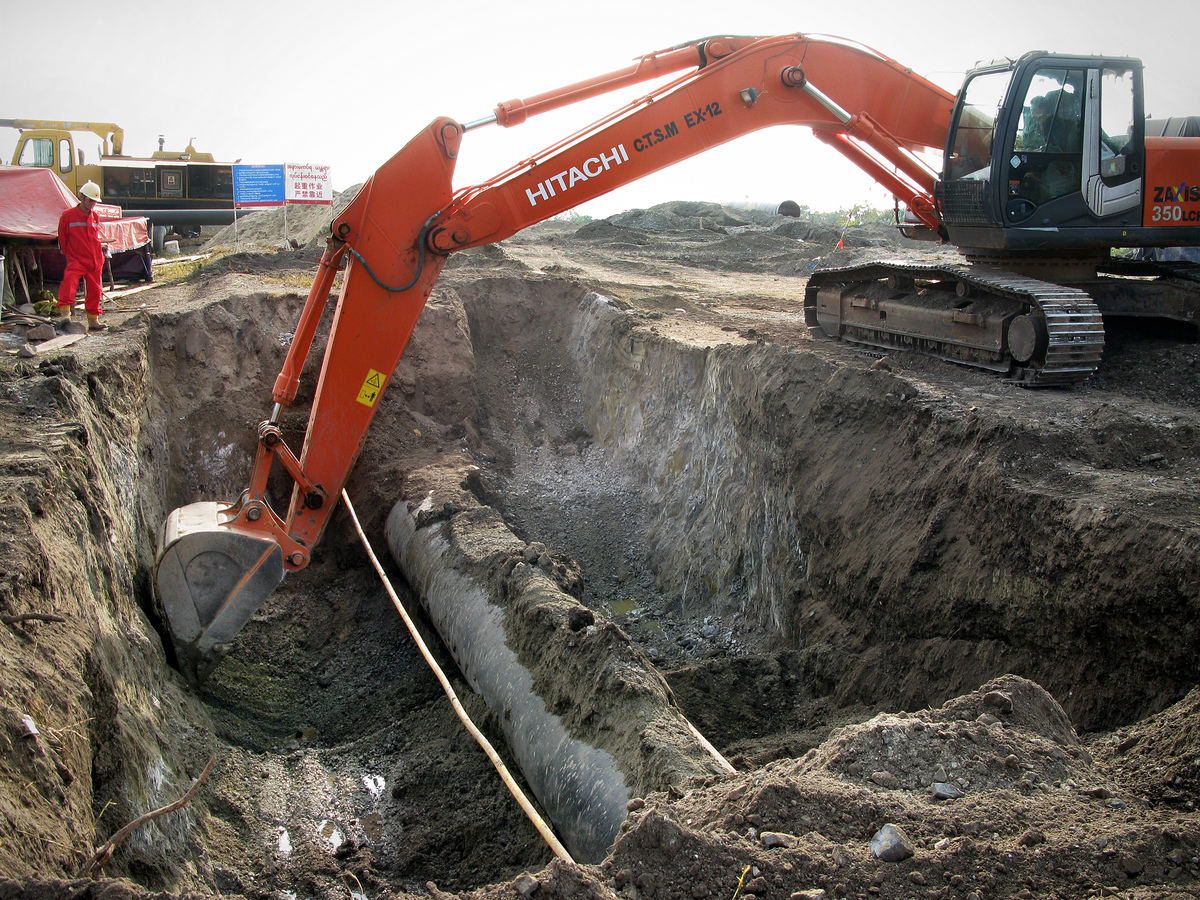 Engineers from China and Myanmar work to bury an oil pipeline outside the Myanmar city of Mandalay. Chinese media reports say the 700-mile-long oil and gas pipelines will be completed in May.

For decades, Myanmar was isolated diplomatically, an economic backwater that seemed almost frozen in time amid a Southeast Asian region that was modernizing at a rapid pace.

But the political reforms under way in Myanmar, also known as Burma, are redefining its place in the world. President Obama's visit in November was a sign of the dramatic turnaround in relations with the United States.

Meanwhile, China, which has been Myanmar's main backer for years, is stepping up its investments. Chinese media report that 700-mile oil and gas pipelines will be completed in May. The pipelines will begin in the Bay of Bengal, stretch all the way across Myanmar and into southwestern China's Yunnan Province.

It's the most strategically vital of China's investments in Myanmar. China will be able to ship oil from the Indian Ocean straight to the pipeline.

This will avoid a potential choke point in the Strait of Malacca, as tankers go the long way around the Malay Peninsula. The pipelines can reportedly transport 22 million tons of oil and 423 billion cubic feet of gas a year.

Villagers Caught In The Middle 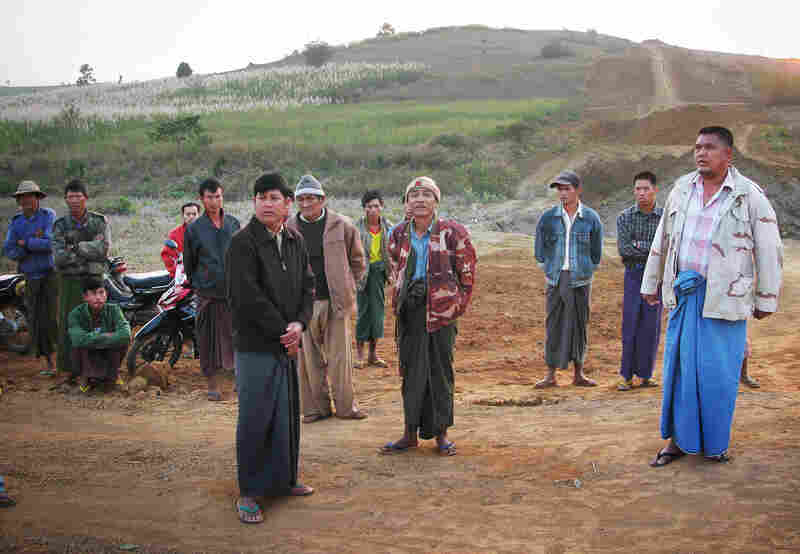 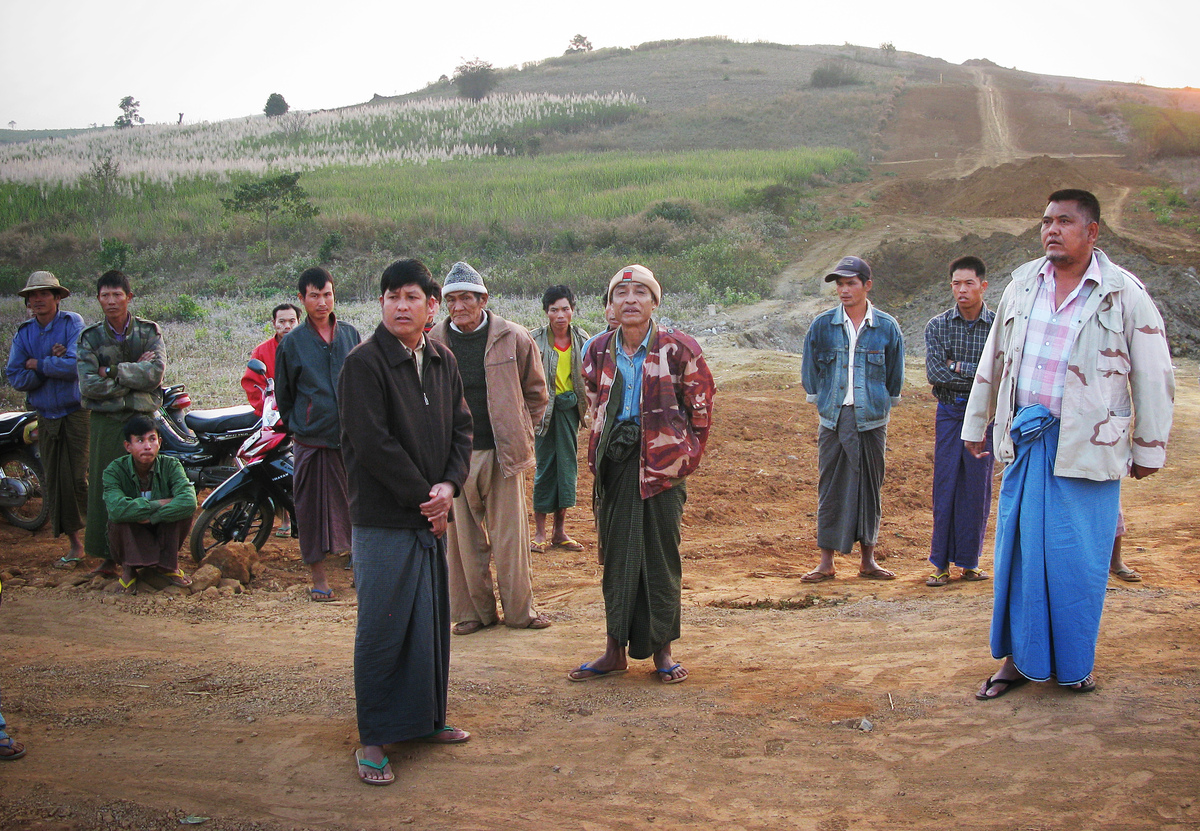 Residents of Nong Pha village in southern Shan State say the Burmese army confiscated their farmland to build the pipeline, and kept money intended to compensate them

Myanmar stands to gain billions of dollars in revenue from the pipelines, but some villagers along the route are already complaining that they are worse off.

Chinese and Burmese work crews could recently be seen burying the pipelines outside Myanmar's second city, Mandalay. When they're done, all that's visible is a ribbon of red earth, stretching through the green hills and valleys.

Further east, the pipeline cuts through Nong Pha, an ethnic Shan village. Residents there complain that the pipeline has left them utterly destitute.

Nong Pha's 42-year-old village chief, U Hla Shwe, says that the army took away their farmland to build the pipeline last year. Since 1995, he says, farmers have been forced to give the army a portion of their crops.

He says the Chinese pipeline company gave the army money to compensate the villagers — but the army kept that money for itself.

"I don't think this is a good project," he says. "I don't know what profits my country will get from it. I just know that my family and my neighbors are suffering and starving, and we haven't seen any money."

Many of the villagers appear hurt and bewildered by their misfortune. They say they fear the army. And they don't dare complain about their troubles.

"We have no jobs, and no money," Hla Shwe says. "Our children can't afford to attend school. Our new president said early in his administration that poverty would be reduced. The present government is really no different from the last one."

Another farmer, 55-year-old U Pin Nya, says the project is affecting his work.

"Even our cows and our water buffaloes are starving," he says. "We may have no choice but to move to another village soon."

U Tin Thit, coordinator of the Myanmar-China Pipeline Watch Committee in Mandalay, cites a Ministry of Energy estimate, putting the cost of the pipeline at $2.5 billion. But only $32 million, or 1.3 percent of that, he says, will go to compensate Burmese citizens for their land.

Tin Thit says he is also concerned about the project's effect on the environment and on human rights.

"If insurgents attack or blow up part of the pipeline, the Chinese could send troops into Myanmar to protect it," Tin Thit says. "This would have a huge impact on our sovereignty."

Officials in both countries deny such a thing could ever happen. Nonetheless, it's a common perception among Burmese.

Such perceptions have led to a rising tide of opposition to Chinese investment projects. Last November, a police crackdown on demonstrators protesting the Letpadaung copper mine injured dozens and sparked a national outcry. The project is operated by a Chinese arms manufacturer, Norinco, and a Burmese military enterprise.

In 2011, strong public opposition prompted President Thein Sein to shelve the Chinese-funded Myitsone Dam on the Irrawaddy River. That incident was the clearest signal yet that Myanmar has begun to reduce its reliance on China.

Irked Chinese leaders have warned Myanmar to honor its agreements.

"Yes, they have to admit that there is some sort of weakness in the CSR, corporate social responsibility, in the previous time," says the former army colonel and military researcher. "Now they are quite aware of that. They need to amend their bad image in this country."

He promises that the government will share revenues from the pipelines with communities living nearby.

China's Roots In The Country

Realistically, he says, his small country has little choice but to stay on good terms with its giant neighbor to the north. But he suggests that like many Southeast Asian nations, Myanmar will be hedging its bets.

"We need some sort of help from the United States," he says, "as a check and balance power to the Chinese influence on the region."

Ko Ko Hlaing says Myanmar is returning to a policy of neutrality that it maintained during the Cold War.

But the big powers were never satisfied with Burma's neutrality. Winston Churchill famously called Burma a hole in the West's Cold War encirclement of China. China's leaders, meanwhile, accused Burma of fence-sitting in the fight against U.S. imperialism in Asia.

China's dissatisfaction grew to a climax in 1967. Maoists tried to export their Cultural Revolution to Burma. They mobilized ethnic Chinese in Burma to wear Chairman Mao badges and wave his Little Red Book of quotations, in defiance of the Burmese government. Anti-China riots followed in Burma, and dozens were killed.

Historians note that Burma's then-ruler Gen.Ne Win benefited from the riots, as it distracted from economic woes at home, particularly soaring rice prices.

Beijing insists that it is careful not to meddle in Myanmar's internal affairs. But the Burmese will not easily forget that for more than two decades beginning in 1967, it armed, trained and funded communist insurgents fighting the Burmese government.

But in private, many Chinese are heatedly debating how China misread Myanmar and allowed the U.S. to increase its influence there at China's expense.

Sun says that China and the U.S. both assumed that Myanmar's 2010 elections were an attempt by the ruling military junta to appease public opinion, while hanging onto power.

"But it turned out the new civilian government was much more eager to engage in political democratization than China originally presumed," she says. "And that's where China's grand strategic thinking on Myanmar fell apart."

Sun adds that, based on its own experiences, China's government believed Burma would be more grateful for the jobs and economic growth that Chinese investments bring.

"As for the downside of these investments," she says, "such as the damage to the environment or the deprivation of the livelihood of some people, China sees these as necessary costs associated with economic development for a less-developed country."

In other words, China may have overestimated the appeal of its development model to the Burmese.

At a Buddhist monastery outside Mandalay, a bell calls crimson-robed monks to prayer. Abbot U Sein Ni Ta, who has organized local farmers affected by the oil and gas pipelines, says he does not want to see his land exploited and his people subjugated, like Burma's deeply Buddhist neighbor just to the north.

"I don't want my country's fate to be like that of Tibet," he says sternly. "The international community should examine the impact of China's investments in Burma. The former military regime signed these deals with China, and now we're paying the price for it."