Accessibility links
Boston Grapples With The Threat Of Storms And Rising Water Superstorm Sandy was a wake-up call for the Eastern Seaboard — especially Boston, where flooding rivers can meet a surging ocean, all in Boston Harbor. So what's a city to do? Retreat from the water or better shield buildings from flooding. 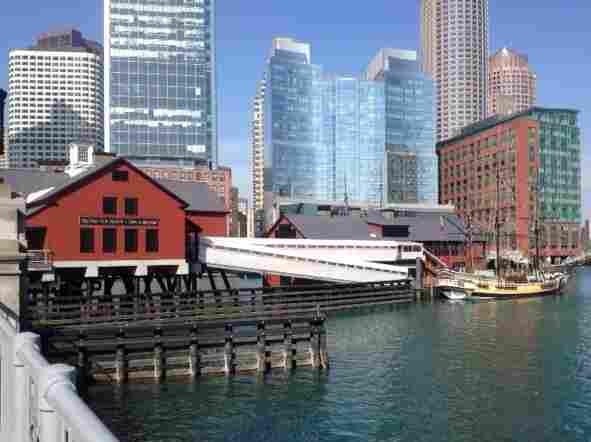 The Boston Tea Party museum sits right on the edge of the harbor. With rising sea levels and the increasing threat of strong storms, buildings like these are at particular risk of flooding. Christopher Joyce/NPR hide caption 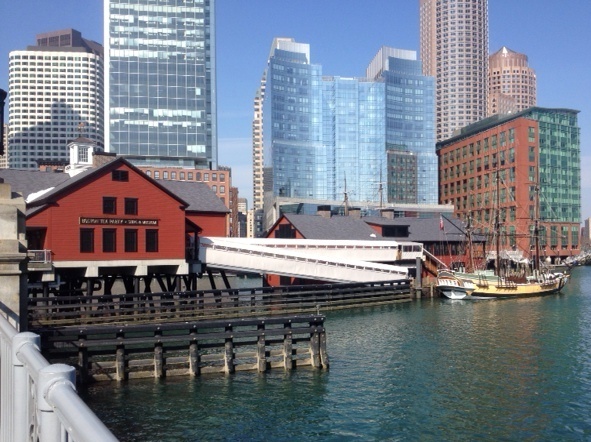 The Boston Tea Party museum sits right on the edge of the harbor. With rising sea levels and the increasing threat of strong storms, buildings like these are at particular risk of flooding.

Since the drubbing that Superstorm Sandy gave the Northeast in November, there's a new sense of urgency in U.S. coastal cities. Even though scientists can't predict the next big hurricane, they're confident that a warmer climate is likely to make Atlantic storms bigger and cause more flooding.

From atmospheric scientist Kerry Emanuel's 6th-floor office at MIT, you can look out at Boston and the snow-covered Charles River as it snakes through the city down to the harbor. It's a beautiful place, located where three rivers meet the Atlantic. Unfortunately, a lot of that water wants to get into the city. Here's why:

First, the Atlantic is warming, Emanuel says, and that puts more water vapor up into the air. More water vapor, he says, "means that a given hurricane is likely to rain much more in the future than it does today. That's a big deal because a lot of the deaths and injuries and loss of property, and so forth, in these storms comes from freshwater flooding produced by rain."

Then there's the problem of rising sea levels. Emanuel says a warming climate is likely to change wind patterns that push ocean water and currents around. "And those wind patterns can make a difference locally to how high the sea level is," he says. "So, for example, sea level is forecast to rise faster along the U.S. East Coast than it is globally."

In a big storm, you get three rivers flooding from one side, and an ocean surging in from the other. They meet in Boston Harbor.

"This is something that we're worried about," says Emanuel. "You're producing more water in the rivers, but the water, when it gets down to the sea, doesn't have any place to go because sea level is elevated."

You can see the problem by strolling along the Boston Harbor waterfront. It's a busy place, with giant office buildings, chic restaurants and the Boston Tea Party Museum, where they re-enact 18th century history and throw more tea into the harbor, just for fun. The high-rises, as well as 19th and even 18th century buildings of brick, are built right up to the edge of the water. There's not really much room from the edge of the buildings to the green harbor water.

Those same features that make Boston Harbor a popular place for business and tourism make it especially vulnerable in a big storm.

Several city neighborhoods, with buildings dating back hundreds of years, are particularly at risk. Vivien Li, who runs the Boston Harbor Association, lives in one. "Many of them are very solidly built," she says, "but the mechanicals and the boilers and such are in the basement level, and that will be the problem." By mechanicals, she means electric switches, water pumps and fuel tanks. 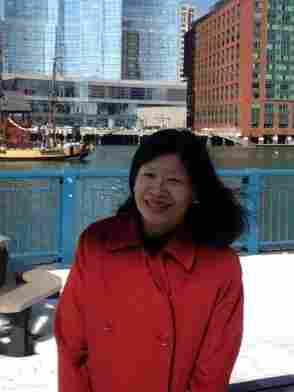 Vivien Li heads the Boston Harbor Association. Her organization is advising property owners in the city on how to prepare for potential flooding. Christopher Joyce/NPR hide caption

Li is trying to make the city more resilient. This month, her group issued a study of what future storms could do to Boston.

Li recalls the response to the study she got from the owners of the city's Harbor Towers high-rises. "If your projections are correct," they told her, "sea level rise could knock out the boilers for two of the largest residential towers in Boston. That's not going to be good for those residents."

The association's study advises property owners to identify low-lying doors or vent openings, underground garages and basement power equipment, and figure out how to protect them from flooding.

That will cost a lot. But Li expects people will pay it rather than leave. "The issue of retreating right now is not palatable for political reasons," she says, "and I frankly think a lot of the residents don't want to move. ... Particularly a lot of older people are saying, 'You know, this is where I've lived all my life.' "

The city government, in the meantime, has issued a questionnaire to anyone proposing to build in Boston. Brian Swett is head of environment and energy for the city. "Now we are asking building [owners]: How are you preparing for the realities of sea level rise? Of increased magnitude of stormwater? We're making sure that you have ... emergency preparedness plans, water tightening your building. And so how do you deal with entrances to garages or to lobbies ... subway entrance platforms?"

As Boston flood zones expand, it will cost more to build in the city. Swett, who worked in real estate development prior to City Hall, says it should. He also believes builders are willing to pay the price. "I'm not saying at all that we retreat from the waterfront," he says. "But it's inherently more expensive. It's also inherently more valuable."

But no matter how well property owners prepare, they could still lose it all as climate changes. One reason many are willing to stomach that risk is that governments may bail them out. Swett, Li and MIT's Emanuel all agree that state and federal flood insurance and disaster relief hide the true risk of coastal development. Emanuel calls it a taxpayer subsidy for risky behavior. "It's as though your health provider would give you a break on your premium if you could prove to them that you would smoke three packs a day," he says. "It's that crazy."

Emanuel says it will stay crazy until people get tired of paying the bill for more storms like Sandy.