Accessibility links
Johnny Marr On Quitting School, Moving To Portland And Wearing Capes The former Smiths guitarist says he's always jumped at whatever situation will draw the best music out of him. 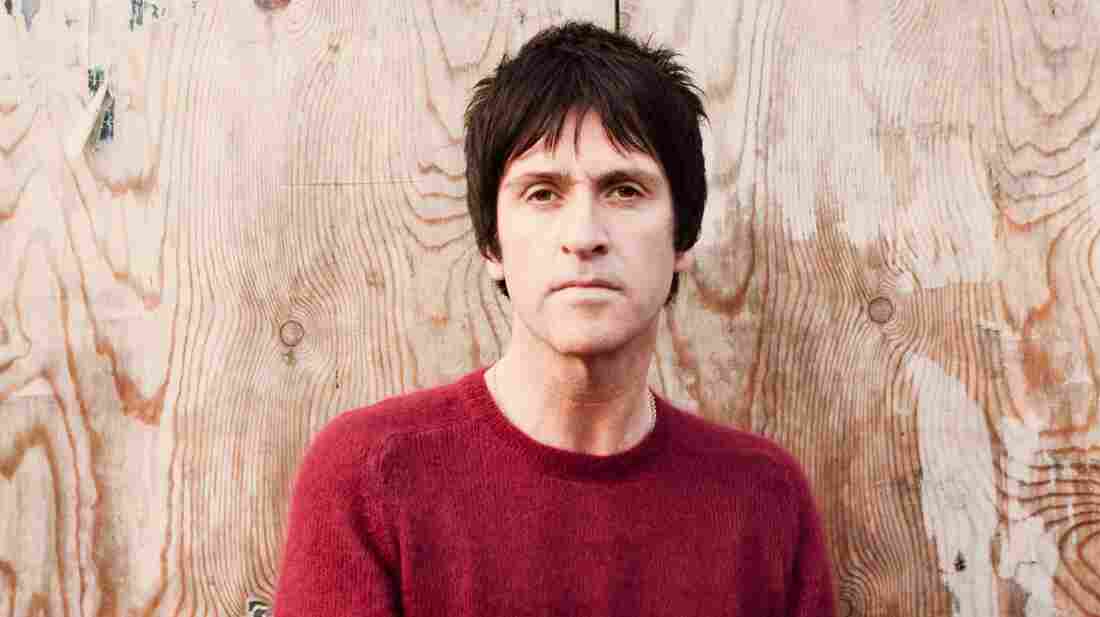 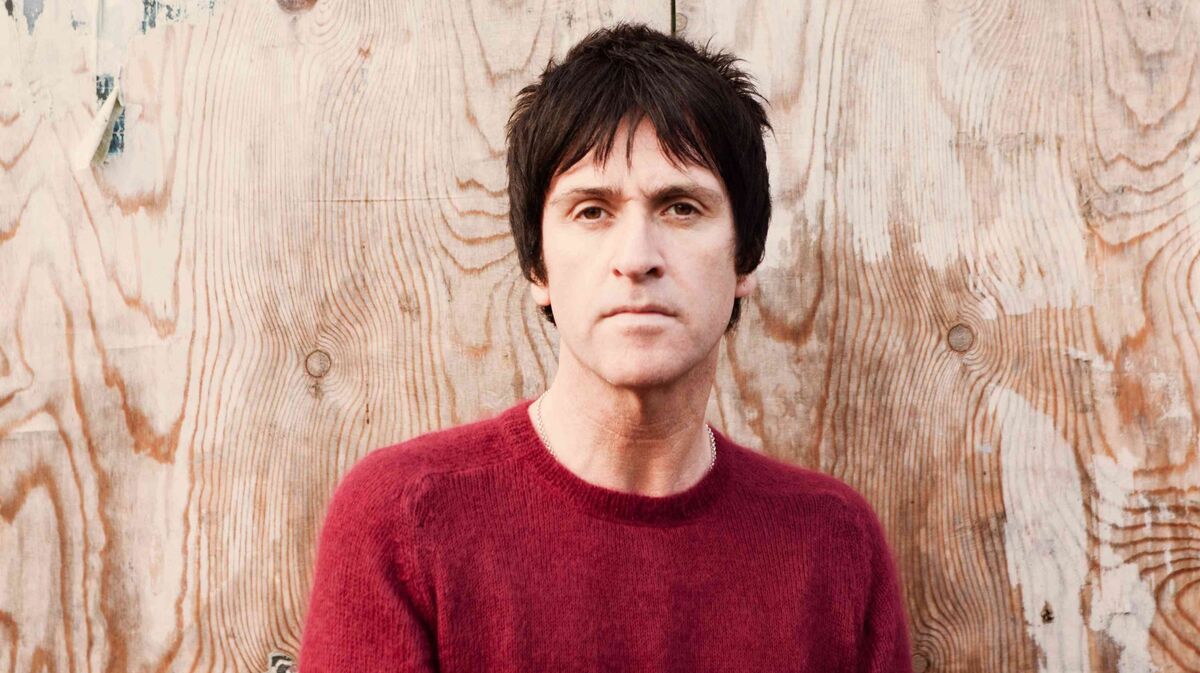 Jon Shard/Courtesy of the artist

Next week, guitarist Johnny Marr will receive the fabulously titled "Godlike Genius Award" at a ceremony hosted by the British music magazine NME. It will honor a life spent largely in the shadows, off to stage left, supporting some of the biggest band leaders in rock history: Chrissy Hynde, David Byrne, and most famously, Morrissey. Together, Marr and Morrissey founded The Smiths, one of the most influential British bands of the 1980s.

The Smiths shone brightly through four albums, then collapsed in spectacular fashion 1987 with a flurry of insults and lawsuits. This week, Johnny Marr is doing something he's rarely done in his esteemed career — releasing an album of his own. His new solo LP is called The Messenger, and he spoke about it with NPR's Jacki Lyden. Hear the radio version by clicking the audio link on this page, and read more of their conversation below.

JACKI LYDEN: Writing for your own voice, you control the narrative. Do you write differently for yourself than you did when you were more of a sideman?

JOHNNY MARR: I've learned to write music for my own voice — my own actual singing voice. I think "narrative" is a good word. This record wasn't a case of me deciding it would be a good thing to do a solo record and then setting about doing it. What happened was, around the end of 2010 I started to get a lot of ideas and notions about things that would be good to write songs about.

Can you give us some examples?

A lot of them have to do with buildings and towns. Cities, people living in them. The speed of life. The last song on the record, "Word Starts Attack," is about relationships via text and emails and eventually social media, and how the pixel has become a big part of the way relationships work. In some ways you could argue that the screen has become a substitute for the face or the heart.

You recently told the music site Stereogum, "Everybody that I've played with over the years has been very strong-willed and has had a very strong sense of themselves, which is something that I'm very drawn to."

I seem to attract and be attracted to very willful, fascinating people. Chrissie Hynde is a very interesting person; she comes to mind, even though I didn't play with her for very long. Almost everybody, all my friends who I've had strong, full-time writing partnerships with — Matt Johnson [of The The], Isaac Brock [of Modest Mouse] — I love them. Morrissey, of course. They're very, very interesting people. But I did realize years and years ago that it must say something about me. Maybe I'm just good at containing people.

Modest Mouse had just had its big mainstream crossover in the mid 2000s when, all of a sudden, you were in the band. How did that happen?

Isaac invited me because he liked that I played with The Talking Heads. He'd had this record that was successful and they were writing a follow-up. He tracked me down. We didn't know each other, we didn't have any mutual friends or any kind of connection, but I was aware of Modest Mouse and I was intrigued by their music. Joining Modest Mouse was just consistent with what I used to do as a teenager: I followed where I thought I would make some interesting music. Initially it was just supposed to be an experiment. The first night we got together in Portland, we started writing songs straight away. And one of them was the song "Dashboard," which became the first single off the record. And I woke up, I don't know, 4:30 in the morning, full of jetlag, wide awake and thinking, "Wow, where am I? Okay, I'm in the United States. Did we just write two really great radio tracks within a few hours of meeting each other? Oh, okay." I think good artists know when they're on a roll and they recognize when lightning is striking. It's a very fortunate thing to have that inspiration and,not to overanalyze it or mess with it; you just follow it if you love what you do. So Isaac and I continued to write.

It's fun to think of this Manchester guy wandering around Portland.

Well, that was five years ago. I have a home there and I can't wait to get back, because I have a really good feeling for the place.

Can you share the inspiration for the song "Upstarts" with us?

"Upstarts" I wrote in 2011. I'd been in New York for a week or so, and during that time there was some rioting that happened in Manchester. It was quite surreal for me to see it played out on television in New York. A couple of streets that I've known from being a kid and, that I was at just days earlier, were all cordoned off and windows were smashed. It was not quite a war zone, but it was pretty nuts.

Shortly before that, there'd been some demonstrations by young students, who were demonstrating about the tuition fees to go to college. And that was something that I was very interested in, because I was right behind them. When I got back to the U.K., the very day I got back, I was driving late at night and I heard a young girl on a radio talk show complaining about the coverage of this event in the newspaper. She used the word 'upstart.' I think she was quoting something from the newspaper; she was talking very, very quickly. So I just put two and two together and came up a playful kind of protest song that was a tribute to defiance. I think quite often, protest songs are by definition uptight and angry and can sometimes be a bit somber. But I wondered what the sound of a bunch of school kids singing a protest song would be.

There's another song, "New Town Velocity," that goes, "Left home a mystery / Leave school for poetry / I say goodbye to them and me." What I'm drawn to is that I know there is a writer behind this; there is a story behind this.

There are only two songs on the record that are actually directly about me, and "New Town Velocity" is one of them. Right at the very end of the process, literally two, maybe three days before the record was being mixed, I decided that there was an aspect of the album that was missing. I was worried that it was just too upbeat. I thought, "There needs to be something of my emotions and my personality and something a little bit kind of candid in there."

So I wrote directly about the morning [in high school] when I decided not get on the bus to go to school — to leave school and not ever go back. And that's what I did. Instead of going to school, I persuaded my then-girlfriend, who's now my wife, to also bunk off school, and she and I and my friend went walking around the town. The song is not really so much about the story, it's about the feeling — that occasional feeling you get that you can shape the world to your own destiny if you want. It's an incredible human moment. The best way I could put that feeling into a song was to tell the story of when it happened to me.

You are constantly besieged by fans and interviewers who are saying, "Hey, is there going to be a Smiths reunion?" Have you been able to put your finger why so many people want you to recreate the past like that?

My experience tells me, unfortunately, that so many people ask the question about The Smiths reforming without really caring about the answer. They just really want to ask the question. It's a little bit like a journalist Tourette's. I know that some of the people who have asked me wouldn't buy a ticket if the band reformed, and it's very unlikely that they even would listen to the records. I'm sure there are other, public figures who just get asked the same kind of question all the time. I understand that it's like a syndrome, so in some ways I don't look at it any deeper than that.

To be fair then to the people that do care, I'd like think that it's because they're nice enough to hope there will be some big happy ending. The fact is, there is a happy ending — I'm happy. It's all cool. it's slightly difficult when people assume that your life will be complete, or everybody's life will be complete, if this band from 25 years ago reforms. Life doesn't need that to happen for things to be okay — really, surely. My goodness, go and see the Dalai Lama or something; that'll make you feel better.

At the end of this month, you'll be receiving an honor that doesn't exist in this country: The music magazine, NME, is going to present you with the Godlike Genius Award. What do you get to do? Do you wear a cape, fight your enemies?

Actually, I got to wear a cape at Salford University about six or seven months ago, when I got an honorary doctorate. That was really cool.

Academic capes for a guy who walked away from school.

I don't know what it means I can do. I'm waiting to find out about this super power.

If this is the way you want to move forward — as a solo artist, a frontman? Or do you think you'll get the itch to go back to being a band animal?

The thing is, I am a band animal even if it's just under my own name, because I have my own band. But about being up front in a band, it's good at the moment. I'm really excited about the songs I've gotten to write. I really enjoy writing words. So this is the time that I'm doing that now and I can't really see myself collaborating. [That said,] I really liked working with Hans Zimmer on Inception. That was a great thing. And I would like to play with Modest Mouse again at some point.There's a big part of me in that band, and that band in me.

My understanding is that on the day you saw an ad for Inception, you got a call from Hans Zimmer, asking you to cook up some music for it.

It was two hours after I'd seen the trailer for the first time, yeah. It was pretty spooky.

You play your instincts very well.

When I was old enough to start doing this, I would do things like get two buses across town in the pouring rain to go and knock on some guy's door who had a four-track, when I'd never seen a four-track before. That happened. Or get on a train somewhere with no train fare and you know, hide in the bathroom when the ticket inspector came around, to go and see a guy who had a Fender Telecaster because I'd never seen a real one. I still do those kind of things. I'll jump on a plane and go off to Portland and stay there for five years. If that's where the good stuff is or if that's where I need to be — wherever the idea is for music, my life follows that.