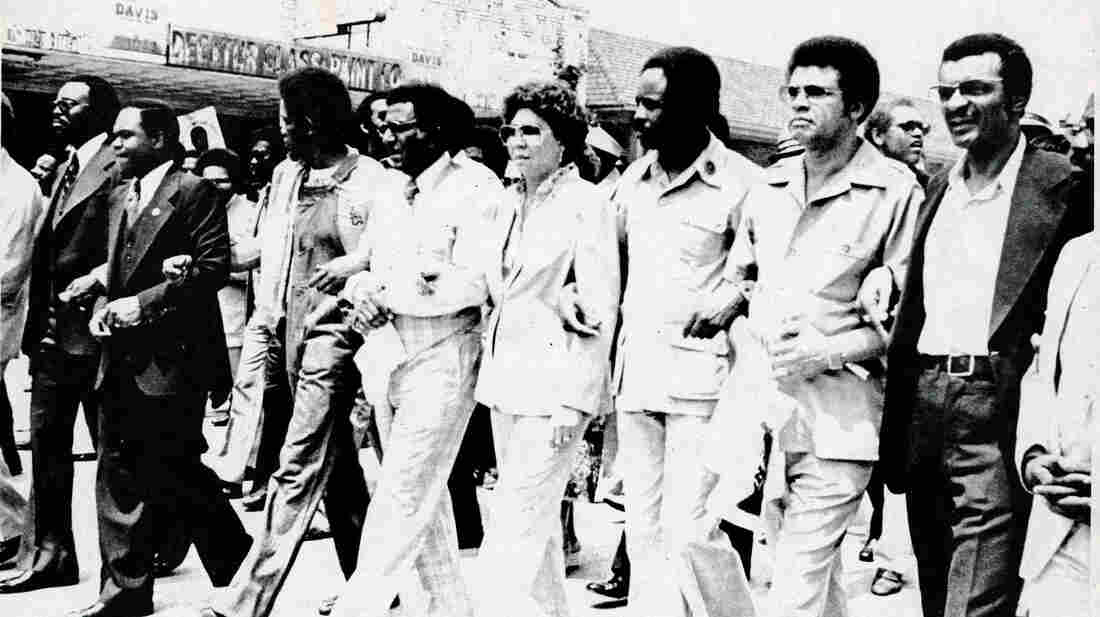 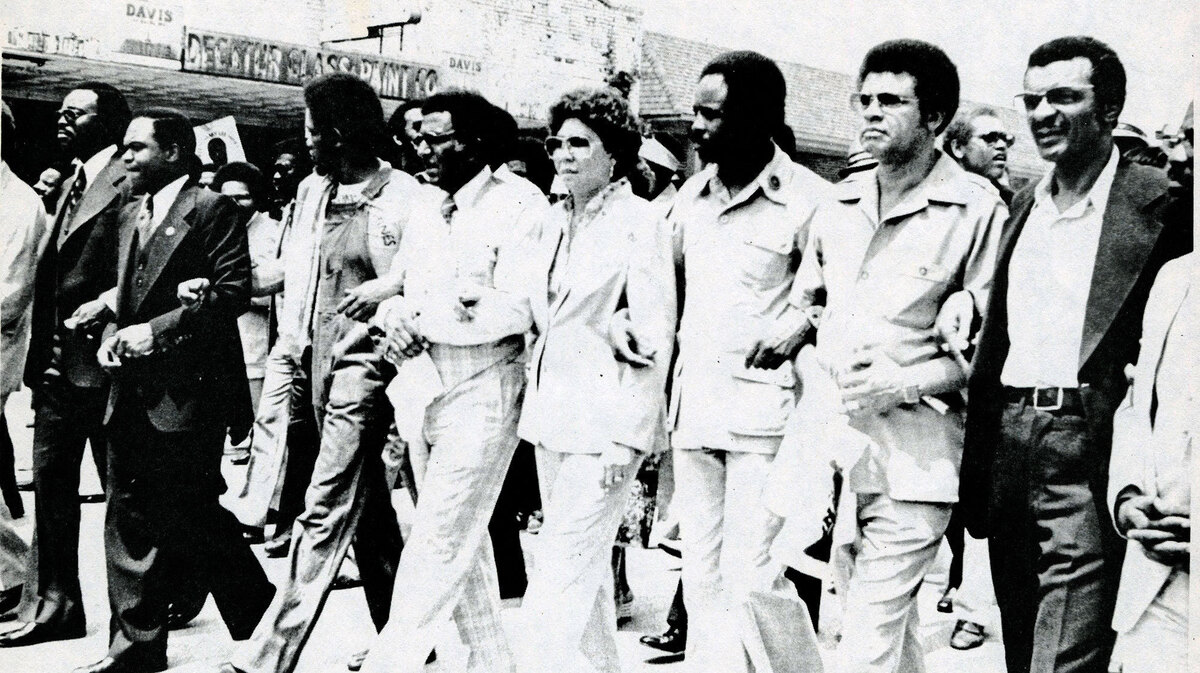 An undated photo from the exhibit shows Southern Christian Leadership Conference officials leading demonstrators in a march "against fear and injustice" in Decatur, Ga.

A new exhibit on the campus of Emory University in Atlanta is bringing civil rights leaders together.

Curators have worked for more than three years to catalog roughly 1,000 boxes of historic documents that tell the story of the Southern Christian Leadership Conference, an early civil rights group first presided over by the Rev. Martin Luther King Jr.

One person who shows up in several of the photographs in the exhibit is Dorothy Cotton, who was head of the SCLC's Citizens Education Program beginning in the 1960s. Cotton, now in her 70s, trained thousands of mostly Southern blacks on how to organize their communities, increase voter registration and stand up for their constitutional rights.

Cotton is still passionate about the movement, and walking through the gallery at Emory's Woodruff library she recognizes early images of civil rights leaders and foot soldiers: Andrew Young, Joseph Lowery, James Orange, Rosa Parks and many unnamed faces who participated in SCLC campaigns. She says many don't understand what went on behind the demonstrations.

"Of course, they couldn't really know about it because it was not something we could publicize," Cotton says. "We would have been shut down [for] teaching all those old black folk that they are citizens and that they have a right to vote and that they can deal with this ... American-style apartheid." 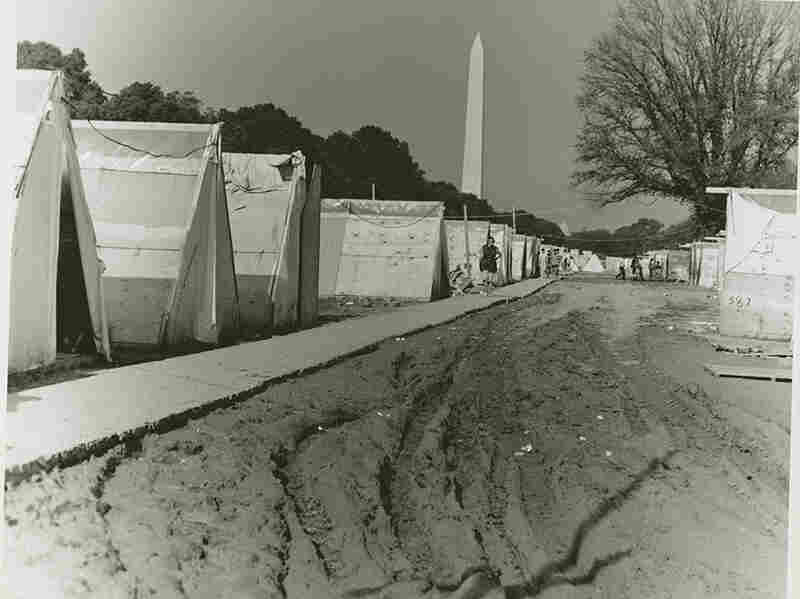 Resurrection City on the National Mall was an attempt by the Poor People's Campaign to bring attention to poverty in America. SCLC records, MARBL, Emory University hide caption 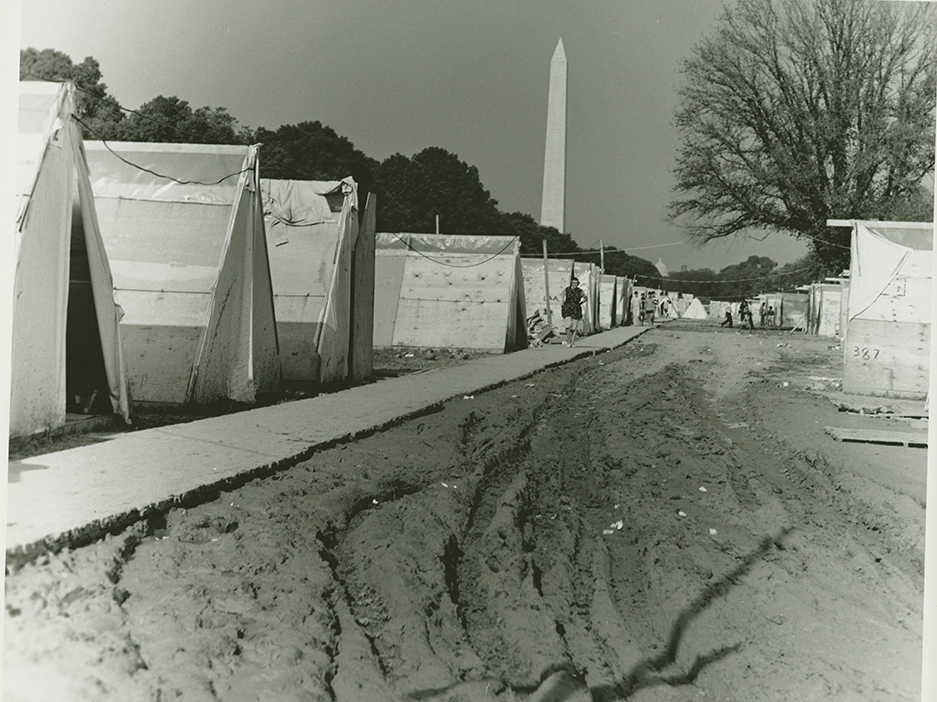 Resurrection City on the National Mall was an attempt by the Poor People's Campaign to bring attention to poverty in America.

A few audio clips of protests in the exhibit give just a taste of the audio contained in the library's collection. SCLC leaders planned demonstrations just after the first Selma to Montgomery march in 1965, after hundreds of peaceful protesters were brutally beaten by Alabama state troopers in what became known as Bloody Sunday.

One section of the exhibit is devoted to the 1968 Poor People's Campaign in Washington, D.C. Thousands of people set up tents and shacks on the National Mall, in what came to be known as Resurrection City. The goal was to get the country focused on poverty in America.

Without a clear victory, the encampment was dismantled, but civil rights leaders say it did highlight the work that needed to be done. Some even suggest it was a precursor to today's Occupy movement.

The organization struggled to find its mission beyond the civil rights era, when inequality and racism were not so overt. The SCLC centered on human rights issues and campaigned to end apartheid, carried out economic boycotts, lobbied for health care reform and encouraged police departments to hold gun buy-back programs.

"We really hope that the exhibition can be transformative," says Michael Hall, one of the exhibit's curators. "Tackling issues of poverty, psychological health, drug abuse; I mean you name it, they were really trying to protect the whole person.

"So we're really hoping that it helps to guide people currently to think about how we can go about addressing some of these issues," he says.

Cotton says these are people who changed this country and it is an important part of the nation's history.

The SCLC is still going through changes, including a leadership struggle that split the group into two factions. Some suggest the organization has outlived its mission, but those who put this exhibit together say it documents how much is left to do.