Accessibility links
Catholic Church At Crossroads: Demographics, Social Issues Pose Challenges Pope Benedict XVI leaves the church in the midst of change: American Catholics' social views tend to diverge from the Vatican's, and the church now sees much of its support in South America and Africa. One former member of the College of Cardinals says the next pope will have to be aware of the church's needs in South America. 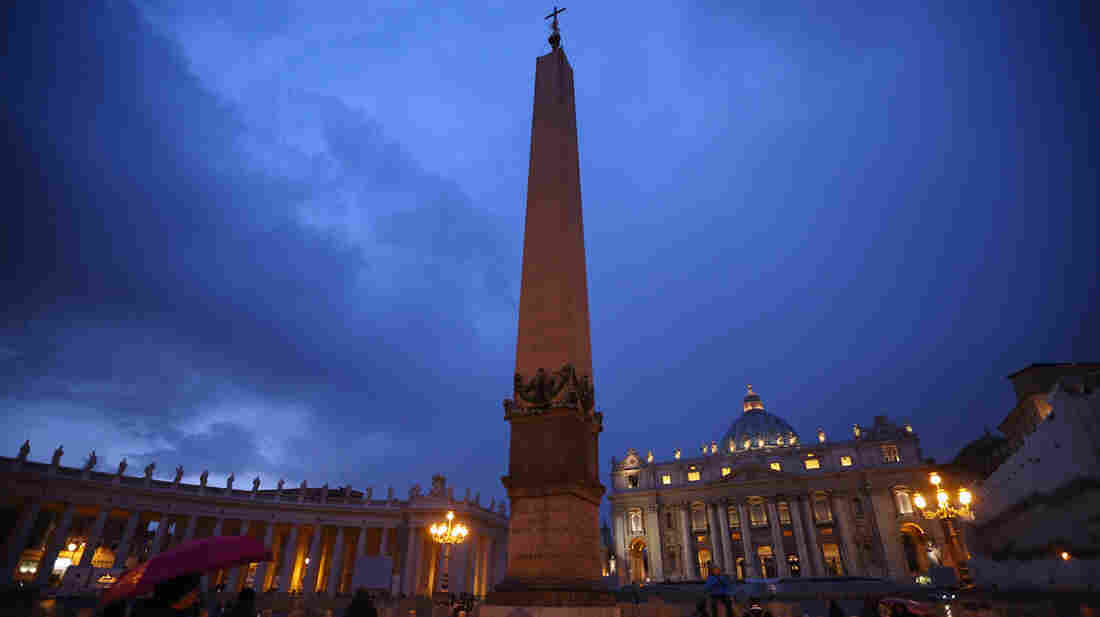 Pope Benedict XVI has been the leader of the Catholic Church for eight years and is the first pope to retire since 1415. Oli Scarff/Getty Images hide caption

When Pope Benedict XVI said he was stepping down, he broke a tradition that had been in place since 1415. The pope, who gave his final blessing Sunday, leaves the Catholic Church in the midst of changing social views and demographic shifts among its followers.

American Catholics' social views tend to diverge from the Vatican's, and the once-Europe-focused church now has its largest support in Latin America. Sub-Saharan Africa is experiencing rapid growth in its Catholic population.

Change In The U.S.

Today, about 1 in 10 American adults raised as Catholic has left the religion, according to a 2009 Pew Research Center poll. Pew reports that more than half of them say they are unhappy with the church's stance on abortion and homosexuality. About 70 percent say they simply drifted away.

When it comes to the next pope, American Catholics generally want to see more modernity, says Robert Jones, CEO of the Public Religion Research Institute.

Mary Elizabeth Williams, a writer for Salon.com and a self-described liberal feminist, says she won't be leaving her Catholic faith, despite differing with the church's leadership. Williams wrote about her conviction in a Salon article this month titled "No Matter What I'm Still Catholic."

"There's this idea that Catholics have to toe the line. But the great example I get from Christ is to make trouble and ask questions," she says. "That to me is the ultimate manifestation of Catholicism."

Although other American-born Catholics are leaving the faith, immigrants are keeping the numbers up.

"Catholics have lost the most adherents of any religious group, but they're been buoyed on the other hand by immigration because a great number of immigrants to the country are Hispanic and are Catholic," says Jones of the Public Religion Research Institute. "So the net of that dynamic is effectively zero, but it hides, I think, a lot of volatility underneath the surface."

North America is home to about 8 percent of the world's Catholics. So when the College of Cardinals meets to elect the next pope, its members will grapple with a church that increasingly resonates in the Southern Hemisphere.

"Back in 1910, nearly two-thirds of all Catholics resided in Europe, now today, that number has dropped to only 24 percent," Jones says. "The largest single block of Catholics is in Latin America and the Caribbean, so we have a very different center of gravity just geographically speaking and ethnically speaking than we've ever had."

But of the 100-plus Cardinal electors meeting in Rome, more than half are from Europe. The average age is 72, but they cannot be older than 80, by Vatican decree.

Cardinal Theodore McCarrick, 82, was one of the cardinals who elected the current pope, but he won't be a part of selecting the next one because of his age.

"We cannot be unaware of the changing face of the church," he says.

McCarrick says the next pope will have to be aware of the church's needs in South America.

"We constantly have to bring ourselves up to date. Not changing our doctrine, because that comes to us from the Lord," he says. "But changing in a certain sense the emphasis that we must put on some things rather than others."

The region where Catholicism is growing the fastest is in Africa. Several African names have been suggested as possible successors, a chance to better represent the "global south."

Jacques Bahati hails from the Democratic Republic of Congo and a long line of Catholics. He's also a policy analyst with the Africa Faith and Justice Network, a Catholic advocacy group.

Bahati says Catholicism has taken firm root in his home country because Rome let parishes adapt the traditional Mass to their own cultural preferences.

"Over there at home, we like to drum, we like to sing, we like the people to be engaged in many ways during mass," he says.

Nigerian Aniedi Okure, executive director of Africa Faith and Justice Network, says religion and life "dovetail into each other" in Africa.

"So religion punctuates most of the things people do," he says, adding, "It becomes something that is a central part of their life, something that informs what they do — morning, noon and evening."