Accessibility links
Oakland To Issue IDs That Double As Debit Cards Oakland, Calif., is issuing municipal ID cards to anyone who can prove residency. It doubles as a debit card. Supporters say it will help residents who are poor, without a bank or undocumented. Immigration control advocates say the city is abetting illegal immigration. 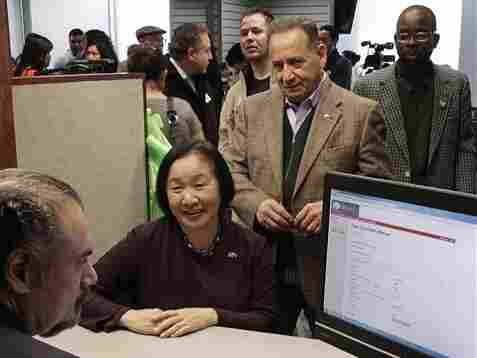 The city of Oakland, Calif., is taking a major step toward helping to bring many of its residents, especially illegal immigrants, out of the shadows.

It will issue a municipal identification card to anyone who can prove residency.

Oakland isn't the only city to issue such ID cards to illegal immigrants. New Haven, Conn., and San Francisco already do that.

The Oakland card, however, has a unique feature — it doubles as a debit card.

In Oakland's predominantly Latino Fruitvale neighborhood, a group of day laborers are gathered for their weekly meeting. They talk about everything from overhauling immigration to keeping safe on the job. Then the conversation turns to the new city-issued identification cards and how to encourage people to apply for them.

Mario Sandoval introduces himself to the group and tells them they should get an identification card especially for times when they have to deal with the authorities — such as getting stopped by the police while driving. It's not a license, but at least they can identify themselves, he says.

The ID card is marketed by a Venice, Calif.-based company, SF Global, in association with MasterCard and the Minnesota-based University National Bank.

Having access to such a bank is important to Marcos Rodriguez, so that he doesn't have to carry large amounts of cash. Otherwise, he says, he's easy pickings for bad guys.

"Sometimes they've got knives or gun in their hands," Rodriguez says. "You know, that happened to me like several times. ... They stole my money and they beat me up, you know, and it's really, really hard for some of us."

Day laborers can be easy targets for thieves who know they carry cash instead of depositing wages in the bank.

"Day laborers most of the time are seen as walking ATMs, because they get robbed on the street," says Gabriela Galicia, who works with day laborers at Street Level Health Project, a nonprofit that serves the undocumented and uninsured.

Galicia's group is part of a coalition that's trying to get the word out about the city ID card. The project has been in the works for more than two years.

Oakland Mayor Jean Quan says the card can help people anytime they deal with a city agency, be it the police or the public library. And the debit feature is important for people who have no place to put their money.

"This debit function will allow them to put their money somewhere safe and to avoid some of the really, really huge fees that they charge at these check-cashing facilities in the Latino community or even the Asian community," Quan says.

The ID card isn't free. It will cost $15 for adults and $10 for youths and seniors. There are also additional costs — for depositing money in the debit account and for withdrawing funds, for example.

Still, the ID card has its critics.

"It's one more way of having a de facto amnesty for illegal immigrants," says Mark Krikorian, who directs the Washington-based Center for Immigration Studies, a think tank favoring strict immigration controls.

But Mayor Quan says the card isn't just for the undocumented. She sees it as a way to bring banking services to citizens and legal residents who are poor and unbanked.

The city began accepting applications last week. The first cards will roll out in mid-March.