Accessibility links
'Poetic Likeness,' Featuring Portraits Of Poets, Reveals Changing Personas Poets are not the world's most visible celebrities. But an exhibit at the National Portrait Gallery in Washington, D.C., puts faces to verse, and explores poets' shifting — and sometimes conflicting — public images. 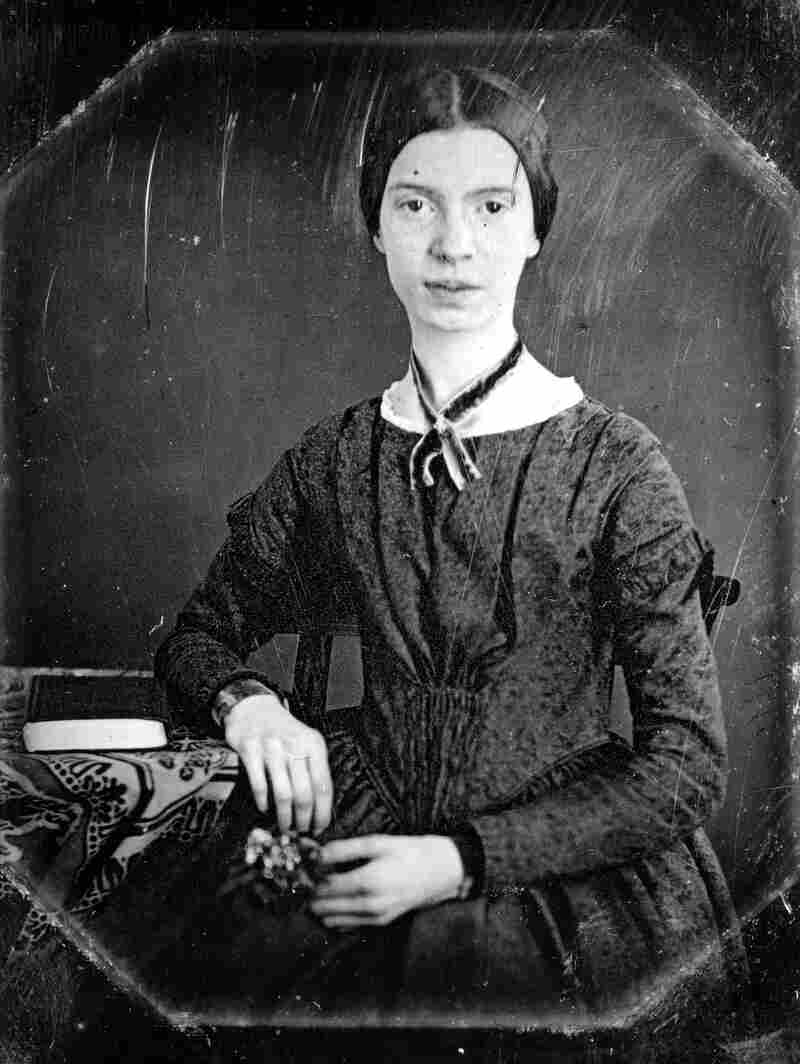 Many American poets were the subject of repeated photographs, but reclusive Emily Dickinson was an exception: This 1847 daguerreotype is the only verified photo of her. AP/Amherst College Archives and Special Collections, and the Emily Dickinson Museum hide caption 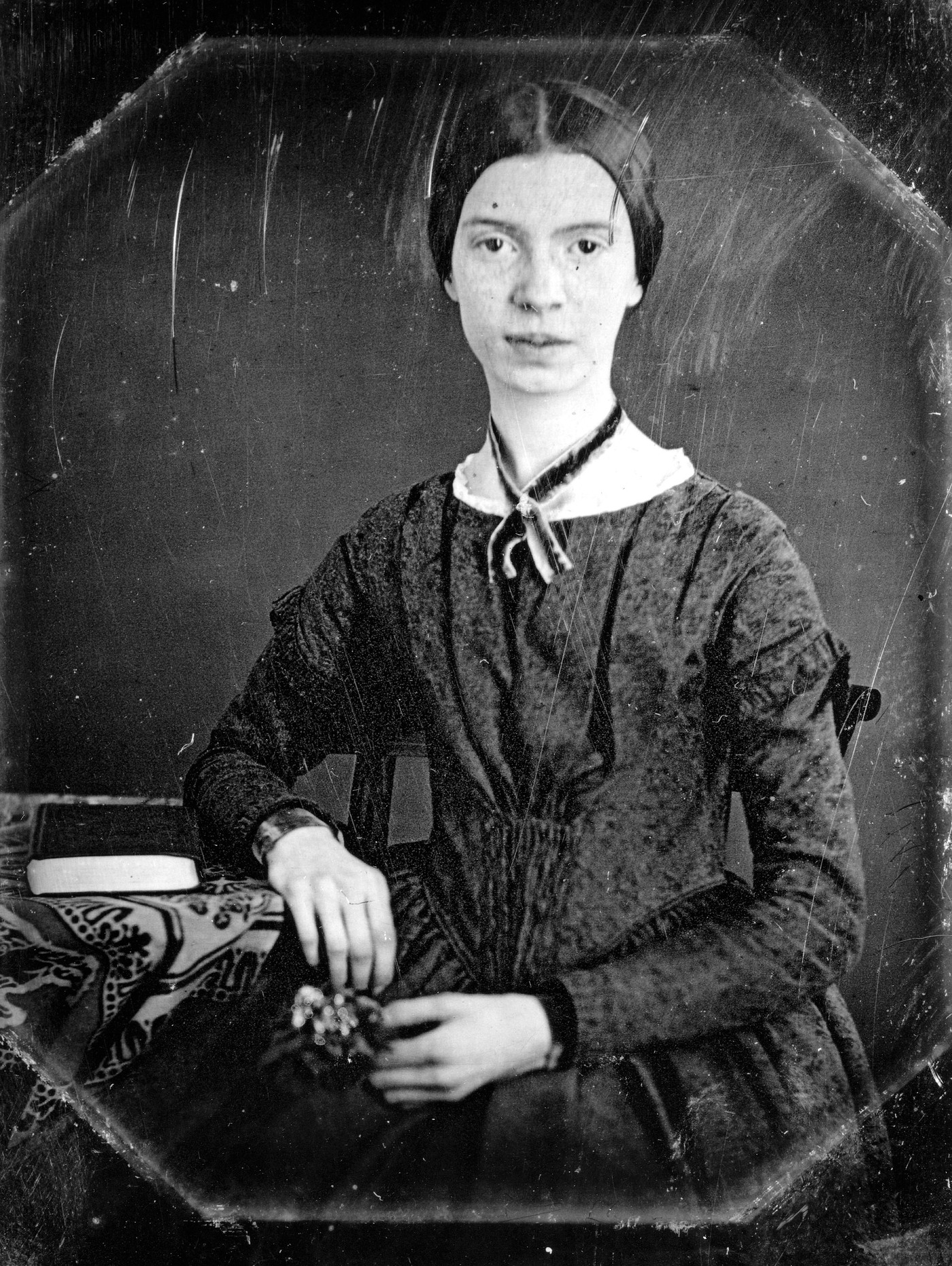 Many American poets were the subject of repeated photographs, but reclusive Emily Dickinson was an exception: This 1847 daguerreotype is the only verified photo of her.

Poets are not the world's most visible celebrities. Their fame is tied to their verbal achievements, not the way they look. But an exhibit at the National Portrait Gallery in Washington, D.C., is putting faces to lines like, "I sing the body electric." "Poetic Likeness: Modern American Poets" suggests that there's more to a poet than appears on the page: that, in fact, 20th century poets were public figures with vivid visual personas.

"The world of poetry isn't the world of baseball," says David C. Ward, a National Portrait Gallery historian and the curator of the exhibit. "It's not sports, it's not show business, it's not politics. It's a smaller world of a union between artists and writers. But these images would be known. They'd pop up in biographies or surveys or in collections."

While there are few remaining images of some poets — there is one confirmed, and very famous, photograph of Emily Dickinson — other poets left behind a trove of portraits from different stages of their careers. Seeing them in one place allows us not only to look into the eyes of some of the country's most famous literary figures, but also to explore their shifting — and sometimes conflicting — public images. 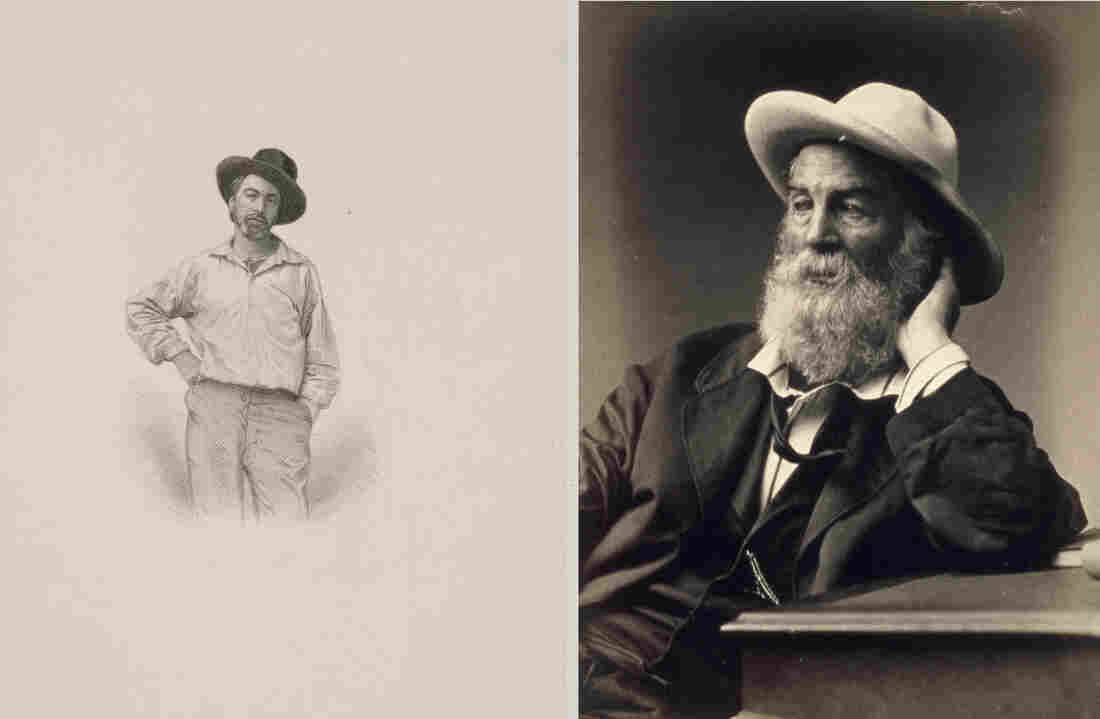 A 1854 engraving by Samuel Hollyer and an 1872 photograph by G. Frank E. Pearsall show Walt Whitman in his trademark cocked hat. "I wear my hat as I please indoors or out," he wrote in "Song of Myself." The National Portrait Gallery hide caption

The images featured in the exhibit show Whitman over the course of his life, from the defiant young man, one year before the first publication of his masterpiece Leaves of Grass, to the established and reflective elder statesman of American letters. But one thing is consistent: a trademark cocked hat, which Ward calls Whitman's "mark of independence." In "Song of Myself," Whitman declared, "I wear my hat as I please indoors or out," and his portraits match his verse. His interest in his image set a precedent for American poets, who throughout the next century used the power of portraiture to craft a variety of public personas. 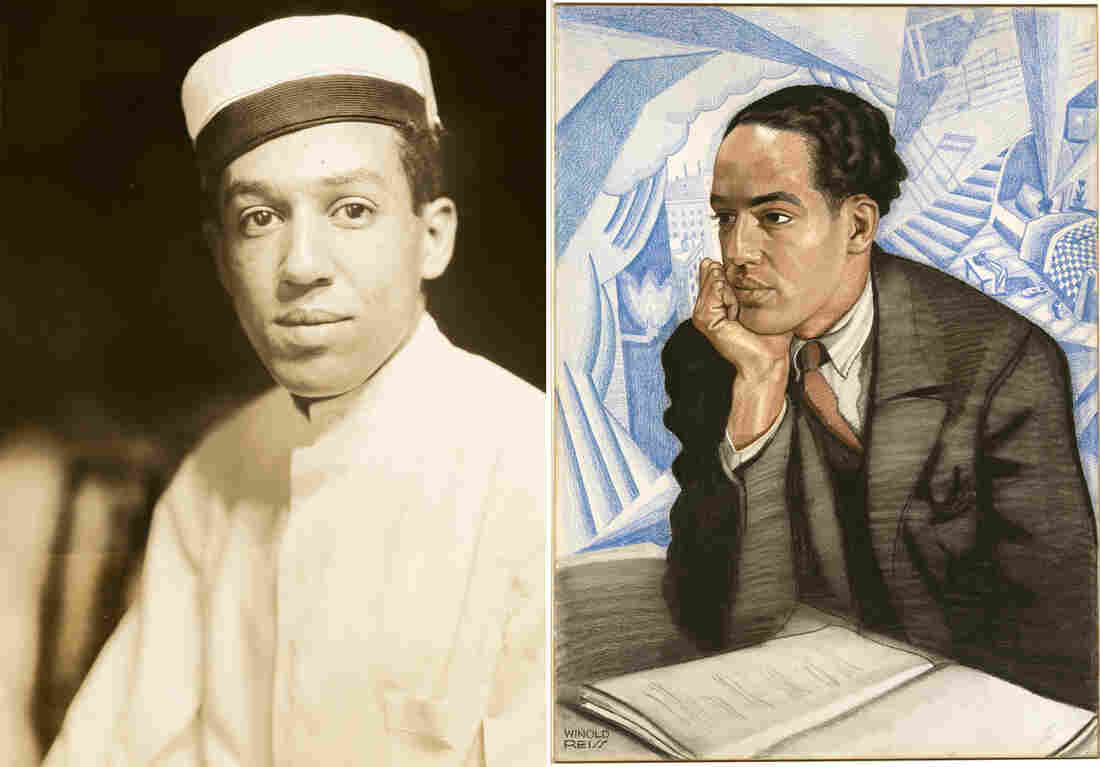 The publicity photo for Langston Hughes' first collection of poetry, The Weary Blues, shows the poet as a young man, wide-eyed and a little baby-faced, in a bellhop uniform. "He's wearing what I think in those days was — and still is — called the 'monkey suit' of the bellboy ... this was seen as a way of advertising the young Hughes," says Ward. But while Hughes' publicist felt the need to emphasize the service-industry past of an African-American poet, Ward says the image is touching because Hughes himself shines through the attempt to control his image.

"He's looking seriously and kind of yearningly at you, in this role in which he's being caught. And this is his huge break," he says. "I mean, this is it for him — he's not going to be a bellboy ... he's going to turn into this ... very powerful poetic voice."

The same year that his publishers were promoting him as a bellhop poet, a portrait by the German painter Winold Reiss showed Hughes as a poet with a capital P — thoughtful, gazing into the distance, with a manuscript before him and a dream world of imagery behind him. Side by side, these portraits tell a silent story of racism, creative accomplishment, and the struggle over who defines an artist's identity. 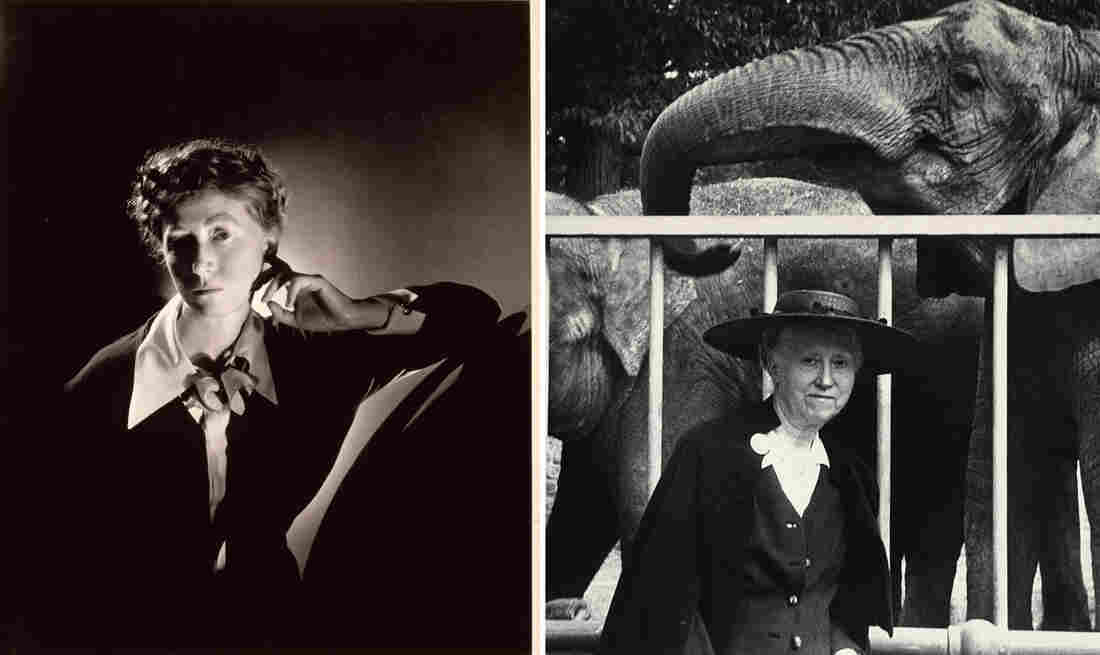 Marianne Moore's collection of portraits tells a story of a different, but equally dramatic, evolution in public persona. In a striking George Platt Lynes photo, young Moore appears as an elegant, authoritative figure: a literary editor, a poetic sensation, and a quiet revolutionary forcing her way into a male-centric poetic community. A later photo shows the older Moore as an eccentric old woman with an odd hat. As a lover of baseball, zoos, Muhammad Ali and tricorn hats — an assortment of interests that earned her, in return, great popularity with the public — Moore in her later years crafted a persona that Ward calls a "public character, a little bit like Whitman and [Robert] Frost, but also slightly more comical." Both as young poetic innovator and as an elderly zoo enthusiast, Moore built public personas that served her well: She remained a fixture in the New York literary scene for her entire life.

When William S. Burroughs photographed Allen Ginsberg in 1953, the young poet bore almost no resemblance to the bearded countercultural icon that he would become in the 1960s. Allen Ginsberg LLC/Corbis | The National Portrait Gallery hide caption

Hear An Excerpt Of Allen Ginsberg Reading 'A Supermarket In California'

Perhaps no 20th century American poet underwent as great a transformation as Allen Ginsberg. An early snapshot, taken before Ginsberg traveled to California, shows a rather unassuming 27-year-old man: "This is him as being a nice guy, Jewish, college kid trying to make his parents happy, going to grad school. He hasn't come out," Ward explains. "This is Ginsberg before he becomes what we think of as Allen Ginsberg." An adjacent poster, with its rock-and-roll lettering and psychedelic colors, is emphatically post-California, after Ginsberg's poetry and politics became more radical. "The subtext is that it's because he came out," Ward says. "When Allen finally publicly recognized that he was gay, it liberated him to write what he wanted ... It's a classic sort of case of coming out of the closet and being able to speak." As he came out and developed his trademark poetic style, Ginsberg became the poet we remember today: the long-haired, bearded prophet of a countercultural generation.

The portraits of these poets — overwhelmingly public images, images the poets, their publishers, or other artists presented to the world — are relics of publicity campaigns more than they are glimpses into private lives. But Ward says that's to be expected: "There's nothing crass about this; poets have to sell books."

Portraits add something to these poets' legacies that can't be found in pure text: This is how they showed themselves to the world when they were writing the lines we're still reading today. And for Ward, seeing the portraits is a way of making a human connection with these long-dead writers. "There's a kind of a basic, almost primal identity, that I think portraiture is as close as you can get to that," he says. "Short of meeting the person and becoming a friend — that's the best — but secondhand, it's a way of seeing that person."