Accessibility links
Movie Review - 'Jack The Giant Slayer': Boy Meets Girl (And Hordes Of Invading Giants) A new film takes a meta approach to tell the simple story of a boy, a girl and some giants. After those confused excesses are tossed aside, the movie is strongest when it focuses on its lovely story of fairy tale romance. 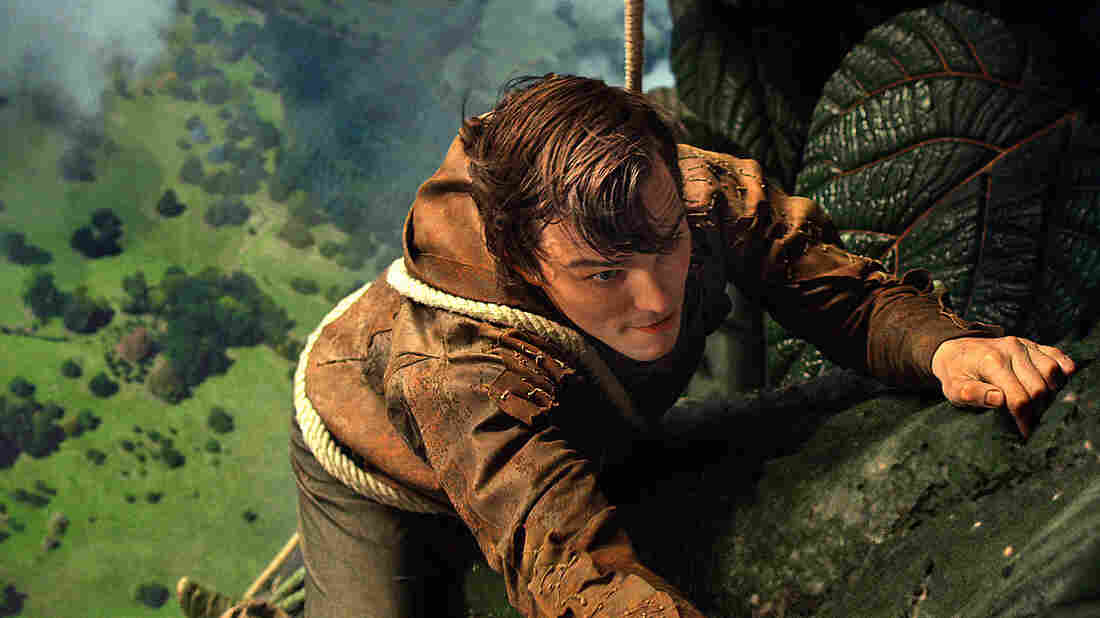 Nicholas Hoult plays the young Jack, who must wage battle against an ancient race of giants in Jack the Giant Slayer. Warner Bros. Pictures hide caption

Watch A Clip From 'Jack The Giant Slayer' - 'There's Something Wrong With Your Knees, Jack'

'There's Something Wrong With Your Knees, Jack'

Watch A Clip From 'Jack The Giant Slayer' - "I'm Not Afraid. Just Not Wildly Keen'

Watch A Clip From 'Jack The Giant Slayer' - 'Giants!'

Great deeds start out as current events, move on to history, and eventually, with some craft and embellishment, become folklore and legend. This process is central to the structure of Bryan Singer's Jack the Giant Slayer, which merges elements of the familiar folktale of "Jack and the Beanstalk" with the less ubiquitous "Jack the Giant Killer." It sets the story as a kind of midpoint between one "true" story that has become a legend for Jack, just as the events of Jack's "true" story have supposedly passed into the realm of a simple folk story.

In the modern world, there's one more step that isn't discussed within the film's depiction of that cycle: the eventual film adaptation, which adds more characters, more adventures and the inevitable romantic subplot. Those are rules that Singer and his frequent writing collaborator Christopher McQuarrie follow to the letter.

That predictability prevents Jack the Giant Slayer from being anything out of the ordinary, but the pair are smart enough storytellers — and have an immensely talented cast — to make the film an entertaining diversion.

Nicholas Hoult (from the zombie romance Warm Bodies) stars as Jack, who has been told tales of a long-ago king who defeated giants descended from the heavens on gigantic beanstalks. These stories are thought to be no more true in Jack's time than "Jack and the Beanstalk" is to us. The basics of that story remain here, as Jack goes to the city to sell an animal and comes back with a handful of magic beans. When they're accidentally planted, the resulting sprout leads up to a world above the clouds — where, it turns out, those giants that were thought to be mere fairy tales are real.

Where it departs is in the notion that there's an entire community of giants, rather than just a couple, and Jack's reasons for ascending the stalk aren't curiosity and theft, but rather to rescue a princess (Eleanor Tomlinson) who has been accidentally carried to the top and is now a prisoner of the giants. He's accompanied by the king's guard (led by Ewan McGregor's Elmont), along with Lord Roderick (Stanley Tucci), fiance to the princess with designs on world domination.

The giant Fumm (Ben Daniels) and his brethren use Jack's unexpected arrival in their world as an excuse to unleash their revenge on mankind. Warner Bros. Pictures hide caption

The giant Fumm (Ben Daniels) and his brethren use Jack's unexpected arrival in their world as an excuse to unleash their revenge on mankind.

Hoult and Tomlinson are perfectly serviceable in the storybook romance at the film's center, though the notion of a headstrong princess falling for a brave farm boy may recall The Princess Bride a little too directly. That's an unfairly high bar for any fairy tale, and the love story between these two can't help but seem a little flat in comparison. The real surprise here is McGregor, who has never stepped into the armor of a sword-and-sorcerers style fantasy piece before, and is clearly relishing getting to play the gallant and fearless head of the king's guard. The movie is instantly more fun whenever he appears.

The film's main problem — apart from its predictability and the sometimes unconvincing and cartoonish CGI for the army of giants — is that it never entirely commits to what kind of fantasy movie it wants to be. Some elements seem squarely aimed at preteen viewers, from some poorly executed bodily function jokes to Ewen Bremner's manic court-jester performance as Roderick's assistant to a really well-orchestrated and funny scene in a giant's kitchen as he prepares Elmont for dinner. Yet the film's more violent scenes, including giants eating people whole, place it squarely in PG-13 territory, making its more youthful inclinations wasted.

Last year's two Snow White films effectively demonstrated the dichotomy of approaches for fairy tale adaptations. Mirror Mirror took the younger route, with bright colors and dwarf-pratfall humor. Snow White and the Huntsman was the darker, more adult take on the story. Singer's film attempts unsuccessfully to satisfy both impulses, and tends to be most successful when sticking to the latter.

Those missteps might lead to some disappointment, but with modest expectations, Jack the Giant Slayer is at worst a pleasant diversion. All its talk of myths and legends, and complex set pieces with giants hurling burning trees at castles might set lofty goals, but at its heart, the film is just a simple fairy tale, an epic reduced to an engaging adventure of a bedtime story.