Accessibility links
Movie Review - 'Leviathan': Fish, Feelings And Cinematic Tone Poems There's a quiet kind of artistry in this commercial fishing documentary — extra quiet, because there's no dialogue. The movie might be an art-house gimmick or even an oceangoing tone poem.

'Leviathan': Of Fish And Men, Without Chats

'Leviathan': Of Fish And Men, Without Chats 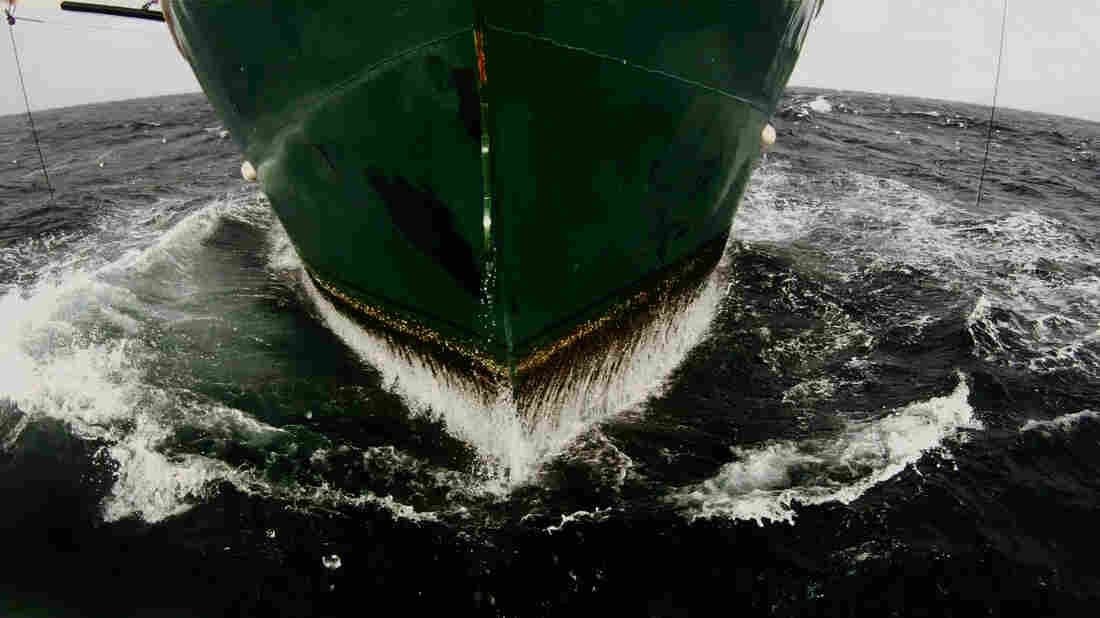 The dingy commercial fishing boats that dot the waters off the Atlantic coast of the U.S. and Canada have lives all their own in the new documentary Leviathan. The Cinema Guild hide caption

Undersea things — iridescent creatures, mossy rocks, silky-slimy plants — are just weird. They're fascinating by their very nature, often barely resembling anything we have on land. Lucien Castaing-Taylor and Verena Paravel's half doc, half art project Leviathan capitalizes on that strangeness while linking it to the more prosaic world of commercial fishermen plying their trade off the coast of New Bedford, Mass.

The result is a self-conscious tone poem concocted from oblique camera angles, shots held longer than it takes a tadpole to reach maturity and nighttime images enhanced with a psychedelic glow. An alternate title for it might be David Lynch, Gone Fishin'.

Is the film food for thought or an art-house gimmick? Leviathan tilts heavily toward the latter, although particularly at the beginning, it does feature some astonishing, "what the heck am I looking at?" visuals, ostensibly intended to make us rethink the whole man vs. nature equation. Castaing-Taylor and Paravel give us blurry close-ups of things like bright green fishermen's slickers and red work gloves, and show the blue-white wave crests that spring up in the boat's wake.

The abstraction of these images is at first captivating. It's as if the filmmakers are inventing a new visual language, a vocabulary that will be useful only until the end of the movie; the images are temporal and dreamy at once, suggesting, maybe, the link between the world of human work and the mysterious allure of the sea.

The ethnography in Leviathan is sensory, all right. There's no dialogue in the film, though the sound design — burbling water, clanking chains — does give an aural sense of what life on a fishing boat might be like. Castaing-Taylor said in a recent interview with The New York Times, "If life is messy and unpredictable, and documentary is a reflection of life, should it not be digressive and open-ended too?"

But digression and open-endedness can take you only so far, and Leviathan begins to run aground early on. The fish are the big victims here: The camera shows us they've been dumped from their nets and tossed into a floppy pile, their mouths gaping as they gasp for breath. 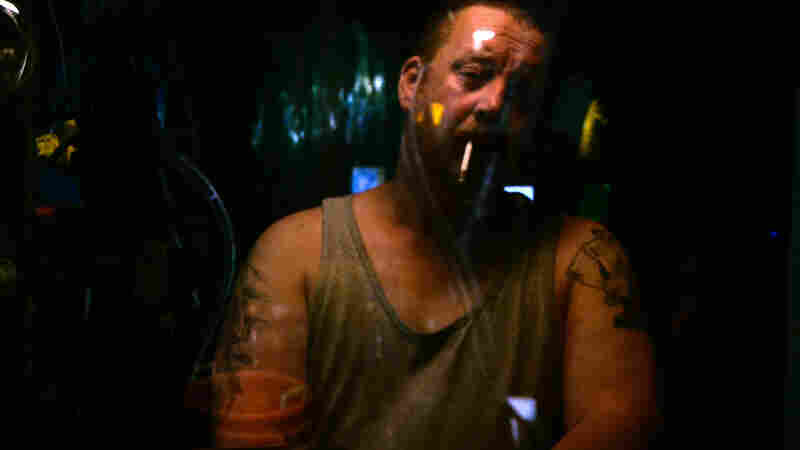 The men who pilot the boats that fill Leviathan are shown in stark, raw honesty — though the film is completely devoid of dialogue. The Cinema Guild hide caption 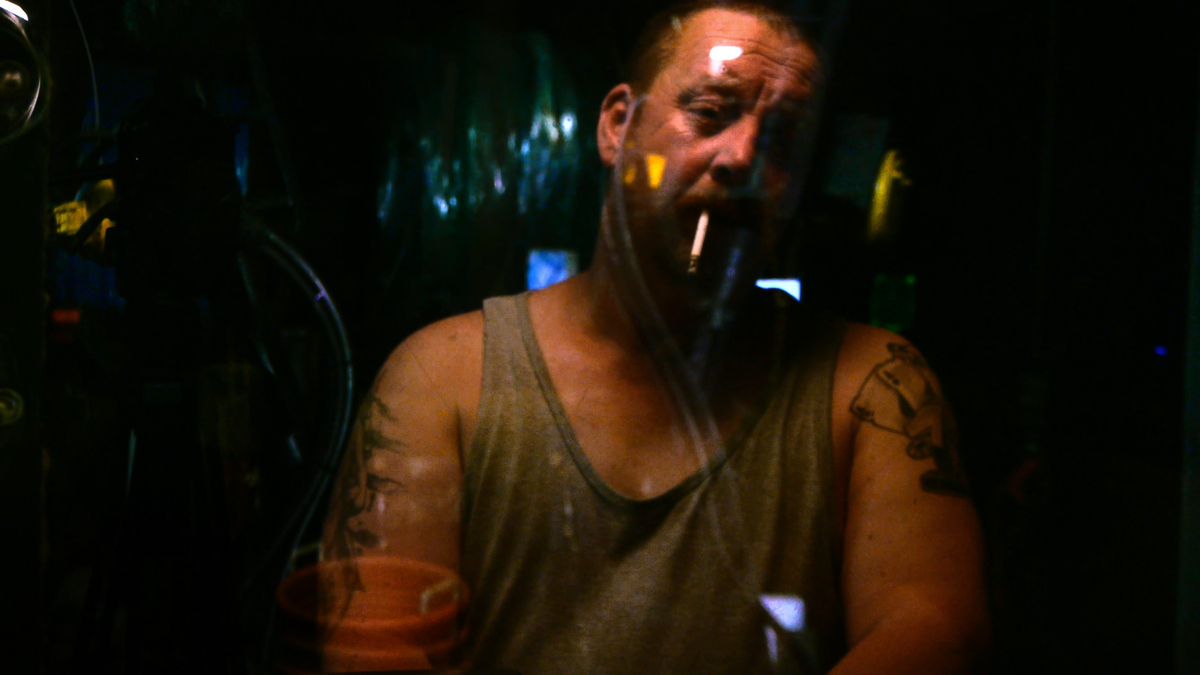 The men who pilot the boats that fill Leviathan are shown in stark, raw honesty — though the film is completely devoid of dialogue.

What are they really thinking? We can't know for sure, but their deep unhappiness is more than implied. The camera lingers, interminably, on their suffering. Later they're gutted — their heads are tossed aside and swept out to sea — and the lens closes in on one of the fishermen doing the deed, his face weather-worn and blood-spattered with a cigarette dangling from his lips.

In order for us to have fish to eat, they must be caught and cut up — Leviathan isn't shy about showing us that reality. But if there's a difference between showing reality and milking it for art's sake, Leviathan crosses that line. And while people who eat fish ought to be aware that an animal died for that human privilege, Leviathan exploits the real-life suffering of those fish for effect — those long takes amount to a thinly disguised shock tactic. Similarly, when the filmmakers zero in on the wrinkly eyelids of one fisherman, they hold the shot for a long time, to the point that the human eye begins to look like something belonging to a creature of the deep.

Maybe Paravel and Castaing-Taylor want to blur the difference between humans and denizens of the sea, to make us think harder about man's connection to nature even as he thinks he's controlling it or putting it to good use. But you can't help wondering how these hardworking fishermen feel about being used as part of someone's heady visual experiment. There's something a little cushy about the movie's view of them; basically, you've got a couple of Harvard-affiliated cameras contemplating the plight of the little guy with lots of Dutch angles and color-enhanced extreme close-ups.

At the end of the day, one party heads to the editing room while the other goes back to dry land (and a paycheck) with a haul of fish. Leviathan, striving for reality by exaggerating it to the point of visual artificiality, is an interesting novelty rather than a work of spectacular depth. Does it tell us what the lives of commercial fishermen are like? In an open-ended and digressive way, maybe. But probably not.