Accessibility links
Experts Boil Telecommuting Decisions Down To Flexibility Vs. Serendipity Yahoo touched off a debate about the effectiveness of telecommuting when it told employees last week that they may no longer work from home. The policy change was made, according to the company's internal email, to enhance workplace collaboration.

Listen · 4:19 4:19
Experts Boil Telecommuting Decisions Down To Flexibility Vs. Serendipity 4:19 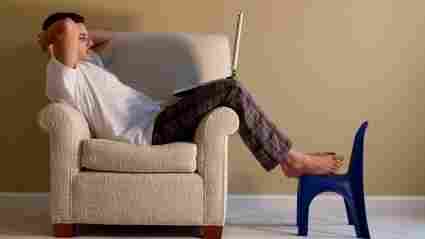 Yahoo touched off a debate about the effectiveness of telecommuting when it told employees last week that they may no longer work from home. The policy change was made, according to the company's internal email, to enhance workplace collaboration.

Yahoo CEO Marissa Mayer, who happens to be a new mother, drew fierce criticism from those who say she should embrace, rather than reject, flexible work arrangements.

What exactly is lost and what's gained when people work from home?

Jerry Davis noticed that his University of Michigan colleagues got most of their work done during "free food Fridays" at the office. Lunch is the bait, and shoptalk the byproduct. That sort of workplace dynamic is Davis' area of study.

"One of the places we studied, the coffee machine, seemed to be the central holy site holding the whole place together," he jokes.

Davis, a business professor, says what you miss in telecommuting is the "Oh, I've been meaning to ask you ... " conversations that turn into something more.

"It's more efficient, but you lose that serendipity," he says.

Davis says he himself has had those moments. When he was donating blood, a political science professor lay on the gurney next to him, and that discussion eventually turned into some scholarly research. And he suspects it's that serendipity that Yahoo is trying to re-create by summoning workers back into the office.

"The random interactions that people have turn out to be potentially quite consequential," Davis says.

But is it possible to measure what that happenstance interaction really generates in terms of innovation or productivity?

He is now studying a group of scientists who recently started working under the same roof. He says those whose daily paths tend to cross at the elevator or copier also tend to collaborate more often.

John Challenger, CEO of outplacement firm Challenger Gray and Christmas, says tech companies were early adopters of telecommuting, and they're now finding that the practice sometimes goes too far. But he says it's interesting that this edict is coming from an Internet company that offers email and instant messaging.

"There's so much irony here," Challenger says. "Not only is this high-tech company that's been at the forefront of the technology that's changed how we work now asking workers to come back in, but also it's a 37-year-old mother who is seeing the advantages of being able to balance her work life and her personal life by telecommuting and yet saying, 'For the good of the company, we can't do this. We have to change.' "

Many people say Yahoo CEO Mayer is missing the point and missing an opportunity to set an example as one of the few prominent women in technology.

One of them is Cindy Auten, general manager at Mobile Work Exchange, a group that helps government and business clients design telework programs. She says telecommuting requires putting trust in your employees. And if you can't do that, she says, you have other problems.

"One of the things telework will expose is issues in your management," she adds.

"You know, a lot of cases, from a management standpoint, is if somebody wants to telework, it's forcing a conversation that you might need to have with that employee, or had needed to have a long time ago," Auten says.

Yahoo said in a statement: "This isn't a broad industry view on working from home." It added, "This is about what is right for Yahoo right now."

In clamping down on remote work, Yahoo is going against the grain. The Families and Work Institute, a research nonprofit, says the number of employers who allow telecommuting has more than doubled since 2005.

"We can't just assume we work in an industrial command-and-control work environment anymore," says Ellen Galinsky, president of the group.

She says companies that don't recognize this do so at their peril. She adds that they risk becoming less productive, because today's top talent values flexibility even more than money.