Accessibility links
The Case For Being Concise: Short Poems That Speak Volumes Brad Leithauser likes to look for poetry in graveyards. An author and poet himself, there's something he values greatly in tombstone epitaphs: brevity. In a piece for The New Yorker's Page-Turner blog, Leithauser cites tiny works that speak volumes. 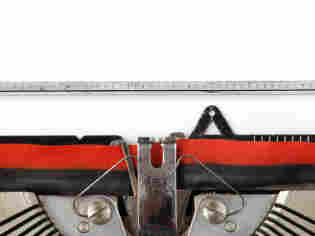 Brad Leithauser likes to look for poetry in graveyards. A novelist and poet himself, there's something he values greatly in tombstone epitaphs: brevity.

"You really don't want to go on at great length," he tells NPR's Neal Conan. "There's something very touching ... in seeing how they are meant to be commemorated, often in little bits of verse here and there."

In a piece for The New Yorker's Page-Turner blog, Leithauser makes the case for conciseness and cites many of the haiku, epigrams and quips that speak volumes.

"I love those moments where you feel you couldn't cut another word out of this if you tried," he says. "It's just as spare as spare can be."

American poet Ogden Nash is well-known for his light verse and is often credited for writing a successful and miniscule poem called "Fleas":

Do you have a favorite short poem? Share it in the comments.

It turns out humorist and poet Strickland Gillilan is the real author of these lines.

Many of the memorable short poems are humorous light verse, but Leithauser points to several examples of complex topics tackled in just a few lines. He's particularly drawn to Donald Hall's poem "Exile." The piece was initially 100 lines long when it was first published, and Hall winnowed it down to just six:

A boy who played and talked and read with me
Fell from a maple tree.

I loved her, but I told her I did not,
And wept, and then forgot.

The last two lines have a great significance for Leithauser. "I grew up in Detroit," he says, "and every time I return to the city, that feeling that even if the streets are the same, they're new. You know, life has moved on."

Though short verse doesn't leave much room for authors to share details about themselves, it often provides a reflection of the writer's circumstances.

Leithauser points to a couplet from Robert Louis Stevenson's collection A Child's Garden of Verses called "A Happy Thought":

The world is so full of a number of things
I'm sure we should all be as happy as kings.

"I think [Stevenson] was the spirit of thanksgiving," Leithauser says, "and himself ... had bad health much of his life but managed somehow to take joy in things and express it appealingly in just a few lines sometimes."

"With these very short poems, you can sometimes feel truly that they don't have an author so much as just a discoverer."

"It's a perfect little poem," Leithauser says. It's a couplet, you know, two lines and two lines. And, of course, it too had a very serious message."

Leithauser says that's the feeling readers should have with short poetry that really works — there's nothing to add, and nothing to take away.

Do you have a favorite short poem? Share it in the comments.