Accessibility links
Interview: Roberta Grossman, Director Of 'Hava Nagila (The Movie)' Director Roberta Grossman talks about her new film, which traces the evolution of the song that everybody knows — but nobody knows much about — from Jewish folk melody to unmistakable party favorite. 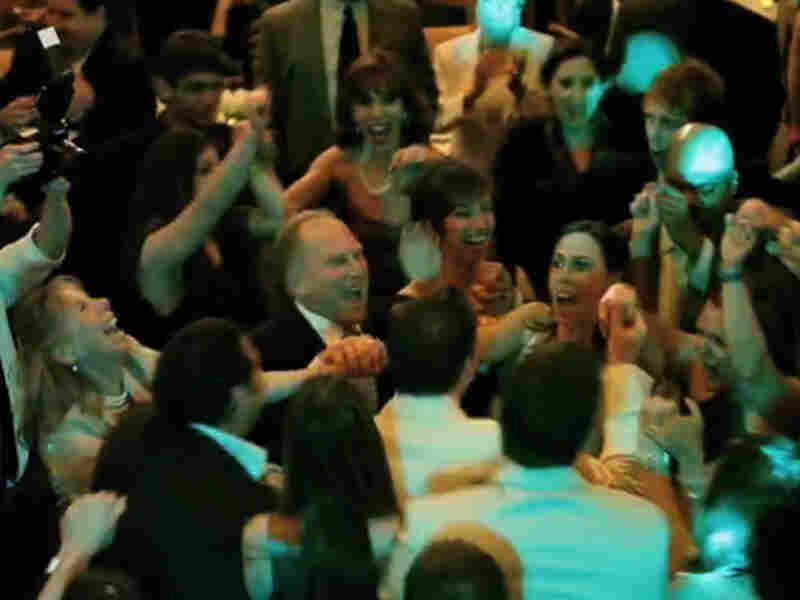 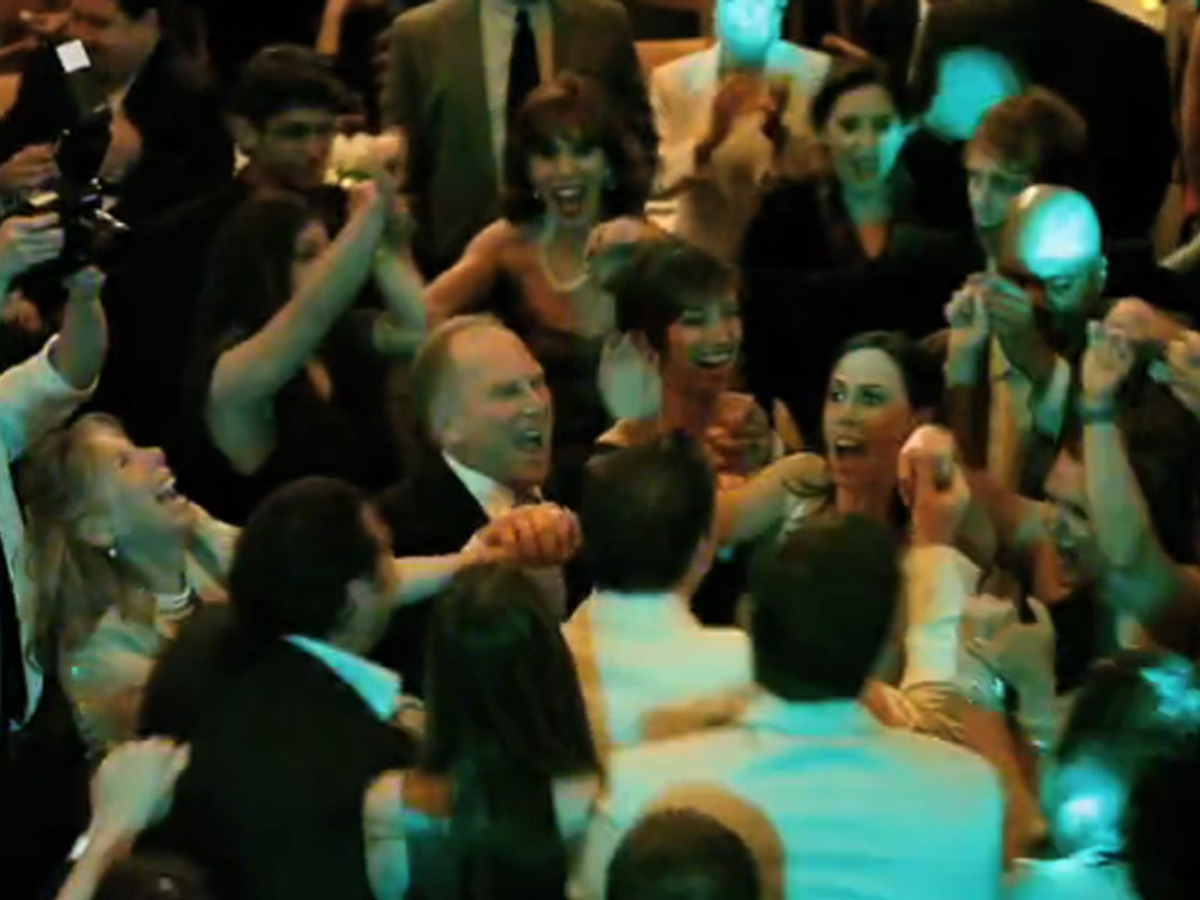 "Hava Nagila" scores a raucous wedding hora in Roberta Grossman's Hava Nagila (The Movie). The film traces the evolution of the tune from folk song to party favorite.

Whether you love it or you hate it, you know it: "Hava Nagila." Maybe you grew up listening to Harry Belafonte's rendition, or found yourself in a chair being hoisted into the air by a singing crowd at your wedding or bat mitzvah. The kitschy Jewish standard lends itself particularly well to group singalongs and celebrity covers — but where did it come from?

In her latest documentary, Hava Nagila (The Movie), filmmaker Roberta Grossman sets out to find the answer. Grossman tells NPR's Weekend Edition Sunday host Rachel Martin that she had always known that "Hava Nagila" binds people together in a special way. But she had never thought too much about its origins.

"It wasn't until I was finishing my last film, my daughter, who was 10 at the time, said, 'Mommy, please make a happy film next time.' And I took a breath, and I said, 'Honey, you know, documentary filmmakers are really not happy people,'" Grossman jokes. " ... But I thought it was a really brilliant idea, and coincidentally, just a couple weeks earlier, no kidding, I had sort of a dialogue bubble come up over my head, and I thought, 'what is 'Hava Nagila?'"

The questions that open Hava Nagila (The Movie) were Grossman's own questions at the beginning of her research, she says. "You know, is it 100 years old or 1,000 years old? Did somebody sit down to write it, did it come down from [Mount] Sinai? And I didn't even know what the words meant. And so began our 'Hava' quest." 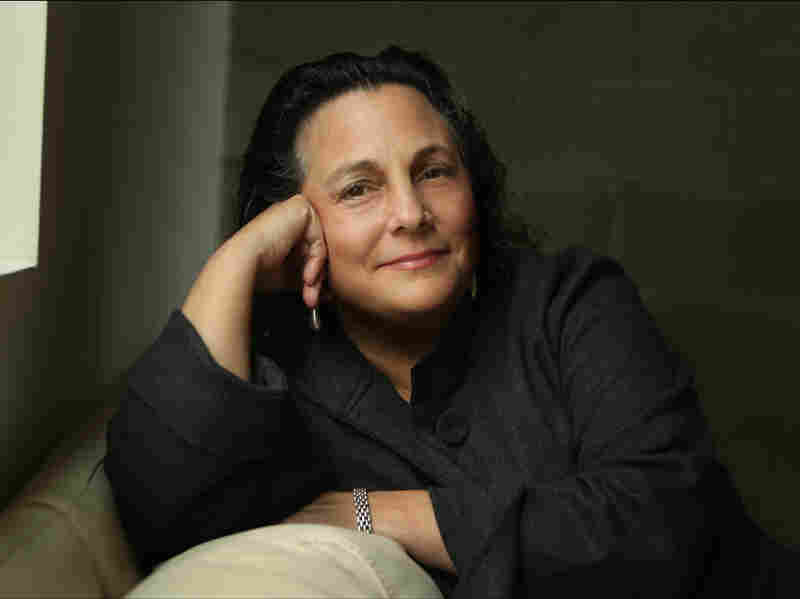 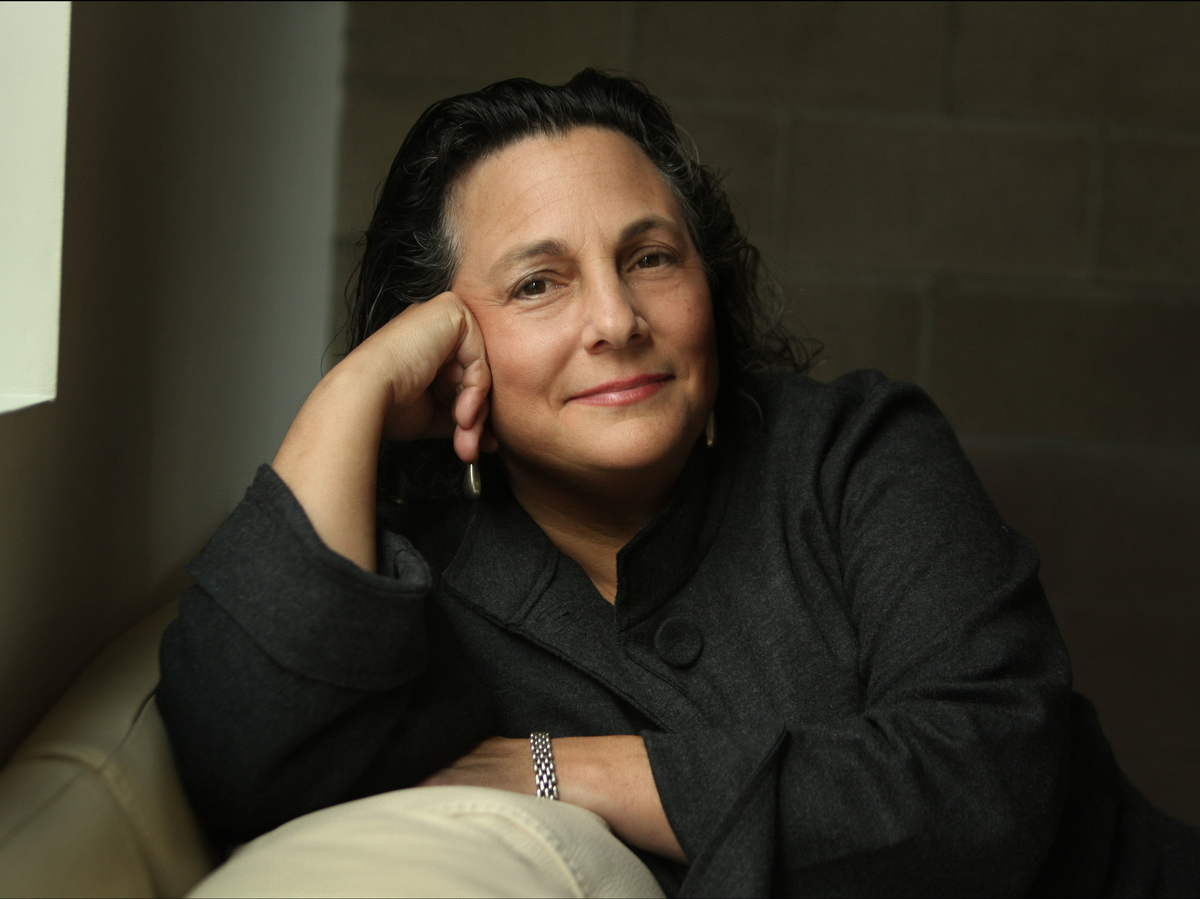 Documentary filmmaker Roberta Grossman traveled to Ukraine, Israel, Greenwich Village and Hollywood to explore the origins and legacy of a famous Jewish song in Hava Nagila (The Movie).

"Hava Nagila" originated as a Hassidic nigun, or wordless prayer or melody. The nigun was used by the Hassidic movement in Eastern Europe, in Sadagora, Ukraine, Grossman explains. In 1905, the Sadagora Hassidim left that area for Palestine, where their song was recorded by the father of Jewish musicology, Abraham Zvi Idelsohn. He also put words to the song, Grossman says.

But the song's primary purpose hasn't always been celebration — its history is deeply political. As a folk song, Grossman says, "Hava Nagila" was a "tent-pole of the conscious creation of a Hebrew culture in Palestine before statehood."

"There were people who were, of course, revitalizing Hebrew as a modern spoken language, and then there were people who were using that modern spoken language to create poetry," she says. "Edelson had in his mind that if you could create a repertoire of folk song drawing on the roots of Jewish music from all over the world, in this case from Eastern Europe, and added Hebrew lyrics to it, then you could create a folk repertoire for the new nation, and that would help build the nation. So, it did have a political aspect to it."

Hava Nagila (The Movie) traces the migration of the song to the United States, where it takes on another life as a favorite tune for stars to cover, and as an infectious party song. In Grossman's mind, the "ambassador" of the song was the singer Harry Belafonte. In the film, Belafonte reflects on performing the song in Germany. 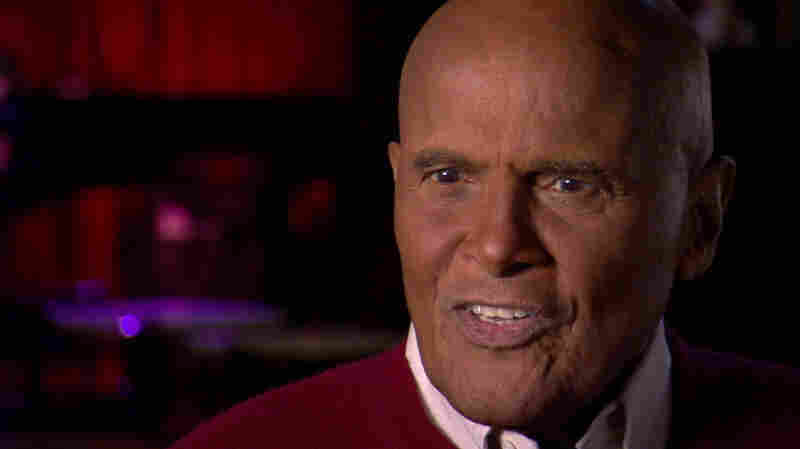 Harry Belafonte, whom Grossman dubs the "ambassador" of Hava Nagila, reflects on performing the song in postwar Germany. "And here were these young German kids, singing this ... Hebrew song of rejoicing. 'Let us have peace.' And I got very emotional." Katahdin Productions/More Horses Productions hide caption

"It hit me kind of hard that here I was, an African American, an American, standing in Germany, a place [that] just a decade earlier had been responsible for one of the greatest mass murders the world had ever known. And here were these young German kids, singing this song, this Hebrew song of rejoicing. 'Let us have peace. Let us rejoice.' And I got very emotional."

"It was a song that would run through my head," Glenn Campell, whose rendition of "Hava Nagila" is on the B-side of his single for the movie True Grit, reflects in the film. "Everybody and his dog knows it. When I was doing bar mitzvahs and stuff like that when I first got out to L.A. ... I learned that one real quick, because you can get some more weddings that way."

When Bob Dylan performed his cheeky "Talkin' Hava Negeilah Blues," he introduced the tune as "a foreign song I learned in Utah." Dylan's guitar, harmonica and yodeling were so culturally incongruous that they became a different kind of homage.

"That, to me, is the Jewish song," Kun continues. "Nothing is more Jewish than that performance, precisely because it is both an embrace and a refusal. It's the smartest song about Jewish identity I've ever heard."

Hava Nagila (The Movie) is brimming with home movie footage of large, boisterous groups getting down to "Hava Nagila" at bar and bat mitzvahs and weddings. The footage, says Grossman, is "from my psyche but not from my collection. We found that film at the National Center for Jewish Film which was out of Brandeis."

Some of the quintessentially celebratory footage is from the bar mitzvah of a boy named Sydney Borstein. "... I would love to speak with Sydney," says Grossman. "I love that family so much, and this is why it's the perfect archival footage. The family is completely filled with joy and happiness. They obviously love each other. They are completely unaware of the camera, so it's wonderful. It's a priceless piece of archival stock footage."

And that pure joy, says Grossman, is ultimately what "Hava Nagila" is all about. Rabbi Lawrence Kushner, one of the many Jewish luminaries in Hava Nagila (The Movie) told Grossman something that didn't end up in the film: "He told me that if he could speak to a boy or a girl who just had their bar or bat mitzvah, and had been lifted up in the chair to 'Hava Nagila,' he'd say, 'I want you to take that 'Hava Nagila' moment, and put it in your pocket, and whenever you need it throughout the course of your life, I want you to take it out, and remember that moment where your parents and your grandparents and your family and friends were all around you , loving you, looking up at you and saying 'Yes, you can do it.' And take that 'Hava Nagila' moment with you for the rest of your life.'"