Accessibility links
Amid Egypt's Divisive Climate, Kerry Urges Economic Action Secretary of State John Kerry is meeting with the Egyptian president and opposition leaders to help forge a path through the country's turmoil. Kerry says it is "paramount" that leaders come together to tackle Egypt's financial woes. 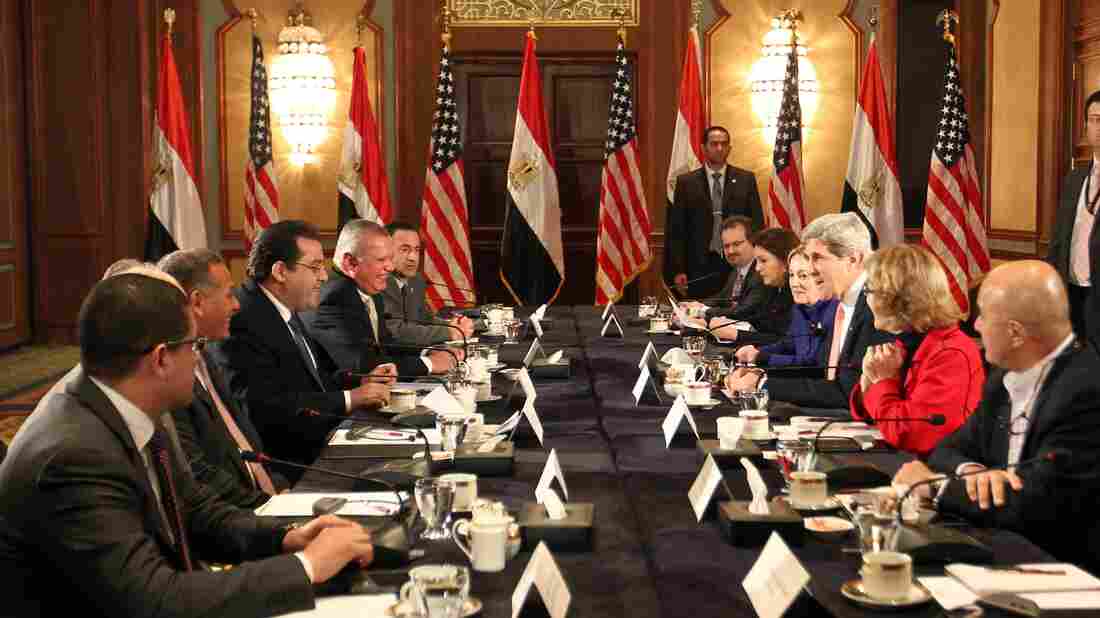 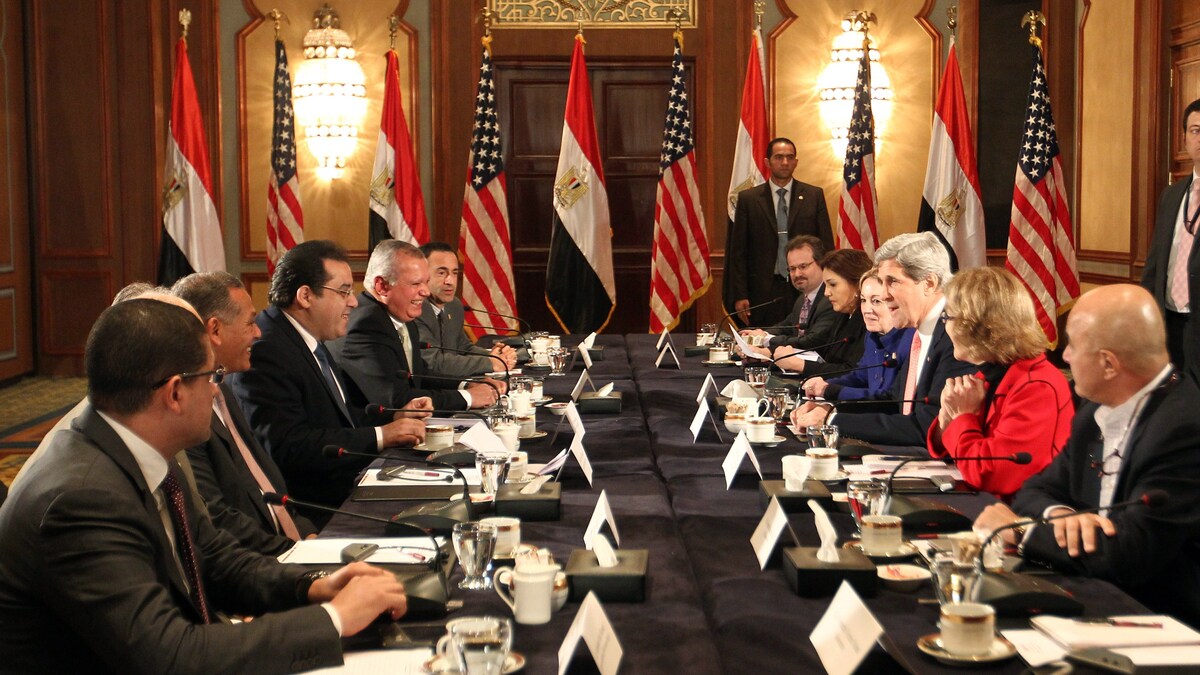 U.S. Secretary of State John Kerry walked into a chaotic situation in Egypt, the first Arab country he's visited in his new role. The country is in economic and political turmoil, and he is trying Sunday to encourage Islamist President Mohamed Morsi to open up the political process and carry out much-needed reforms. After their meeting, he announced the U.S. would release $190 million in aid to Egypt.

Kerry has also been hearing complaints from opposition figures, who have vowed to boycott upcoming elections.

He is making it clear he didn't come to lecture, but rather to consult — to help Egypt, a key Arab partner, get through difficult times. The road to democracy, he says, is a long one.

"I say with both humility and with a great deal of respect, that getting there requires a genuine give-and-take among Egypt's political leaders and civil society groups, just as we are continuing to struggle with that in our own country," he says.

Kerry argued that coming together to handle the country's economic crisis was particularly urgent.

A Push For 'Reconciliation'

He met Saturday with opposition figures in a group setting at his hotel in Cairo. Among them was Mohammed el-Orabi, who briefly served as foreign minister and is now the deputy chairman of the Congress Party.

"We will boycott the upcoming election, and we told him that," el-Orabi says.

He says Kerry didn't ask them to change their minds, but that he promised to urge President Mohammed Morsi to allow free and fair elections.

"In the meantime, he was also very strong ... that Egypt should start to rebuild its economy very soon," el-Orabi says. "Otherwise, it will be a failed state, and this might give some ... potential to real chaos in this country."

Also in attendance was Anwar Esmat Sadat of the Reform and Development Party, a nephew of the late Egyptian leader Anwar Sadat. Sadat says he listened carefully to Kerry's thoughts about Egypt's fractious politics.

"There has to be sort of reconciliation. There has to be a united [Egypt], so we can go through these difficult times that we have," Sadat says. "So he's been ... quite helpful in listening and also giving his advice." 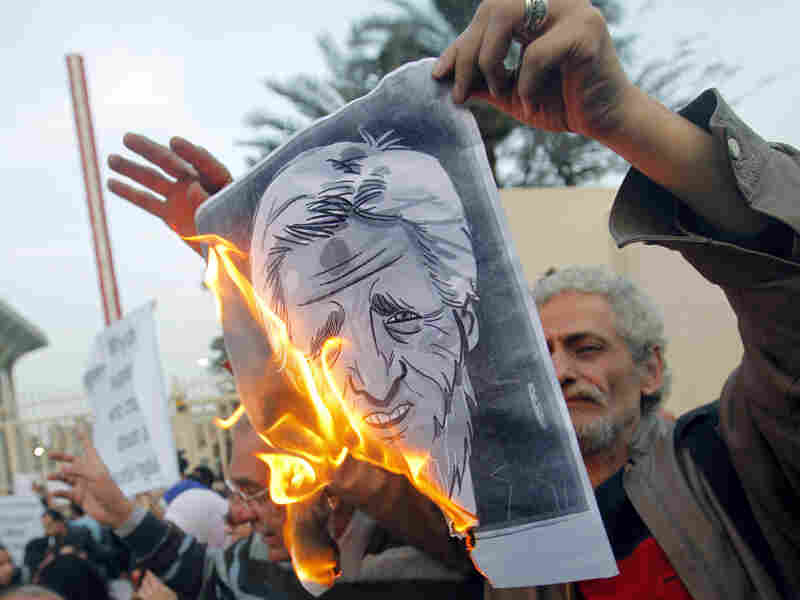 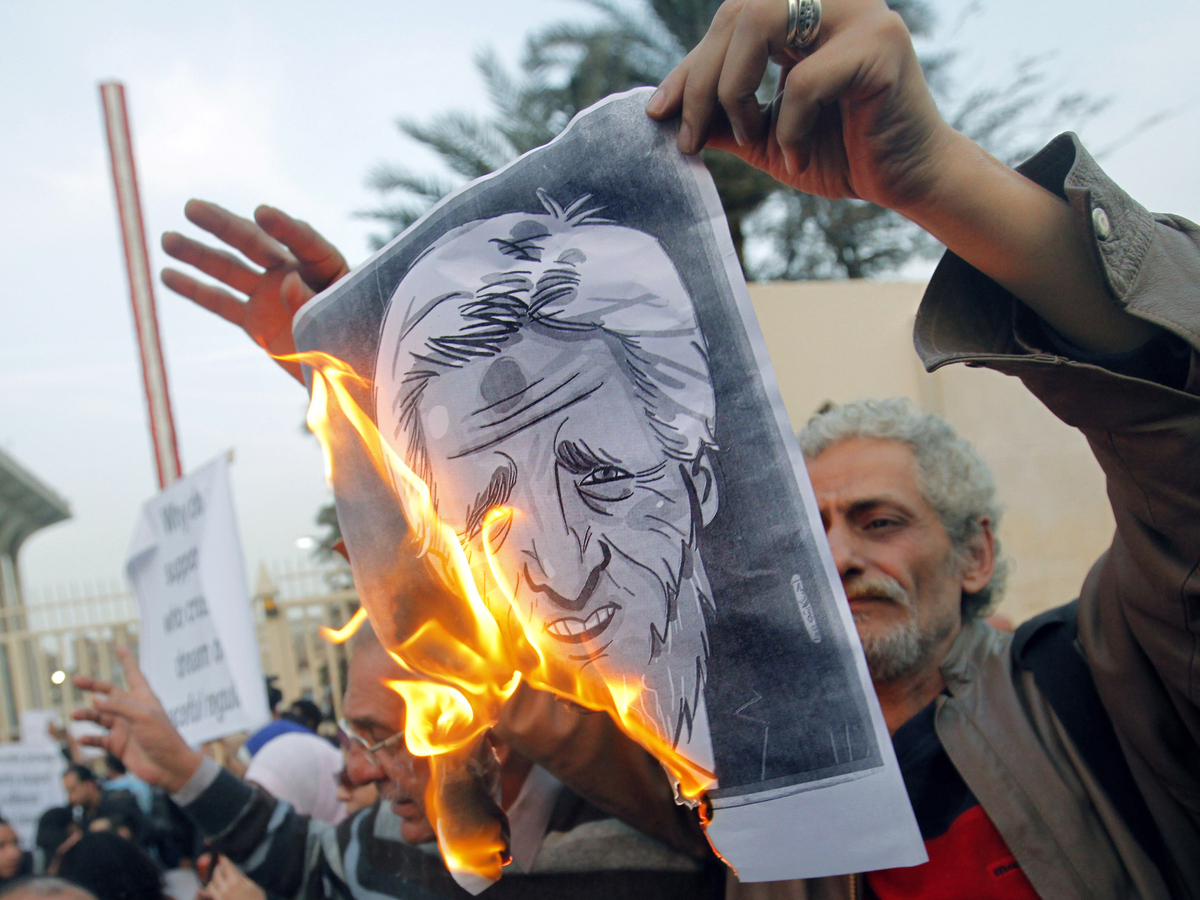 Egyptian activists burn a poster depicting Secretary of State John Kerry outside the Egyptian Foreign Ministry in Cairo on Saturday. Some accuse Kerry of supporting the Islamist government.

Not everyone Kerry invited showed up, and some protesters elsewhere in Cairo were reportedly burning pictures of the secretary, accusing him of supporting Egypt's Islamist government.

But Kerry seemed calm in the face of this, telling reporters traveling with him that he heard very passionate perspectives from Egyptians who are committed to the democracy they fought for in their revolution.

"There was a divergency of views in terms of the adamancy, but they all shared a sense that they need to be more a part of the process, more included," Kerry said. "They recognize the economic challenge, but they believe there's a need to fulfill the promise of democracy. And so do we. We believe that, too."

In Need Of Funds

But Kerry is urging all actors in Egypt — from the Islamist government to secular opposition — to come together to deal with their economic woes first. He says it is "paramount, essential, urgent" that the Egyptian economy gets back on its feet.

Egyptian Foreign Minister Mohammed Kamel Amr says his country is counting on the U.S. to help.

"We expect from friends, particularly the United States, to stand by Egypt during this period," he says.

Egypt is already one of the largest recipients of U.S. aid, most of it military. Kerry says he wants to do more to support small businesses and trade.

He's trying to encourage the Egyptian government, though, to take the steps needed to reach a deal with the International Monetary Fund that would bring in $4.8 billion to the country. U.S. officials say it would also unlock more U.S. aid.