Accessibility links
Miles From Home, Syrians Vote In Free Elections Aleppo, Syria, is holding the first free elections for 25 city council seats and 26 provincial council seats. This election is far from perfect, but those involved say they want to set an example for other Syrian towns. 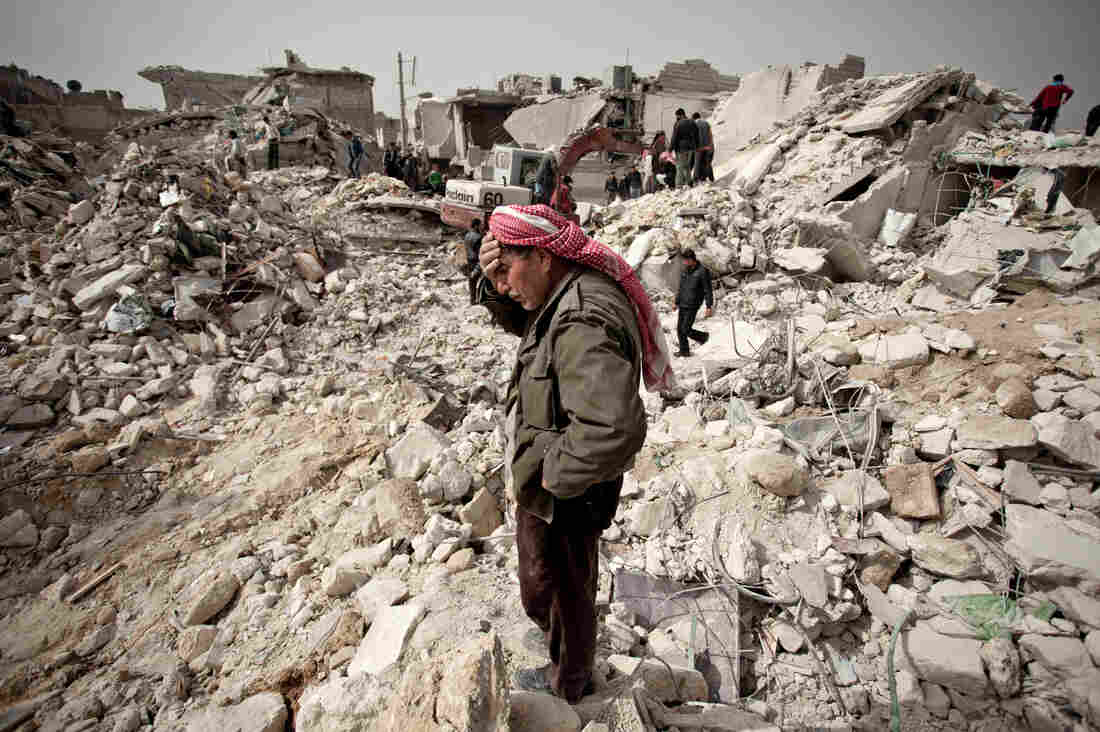 As Aleppo residents in the Tariq al-Bab district recover from this week's attack by Syrian regime forces, delegates from the city are in Turkey holding an election for local officials. AFP/AFP/Getty Images hide caption 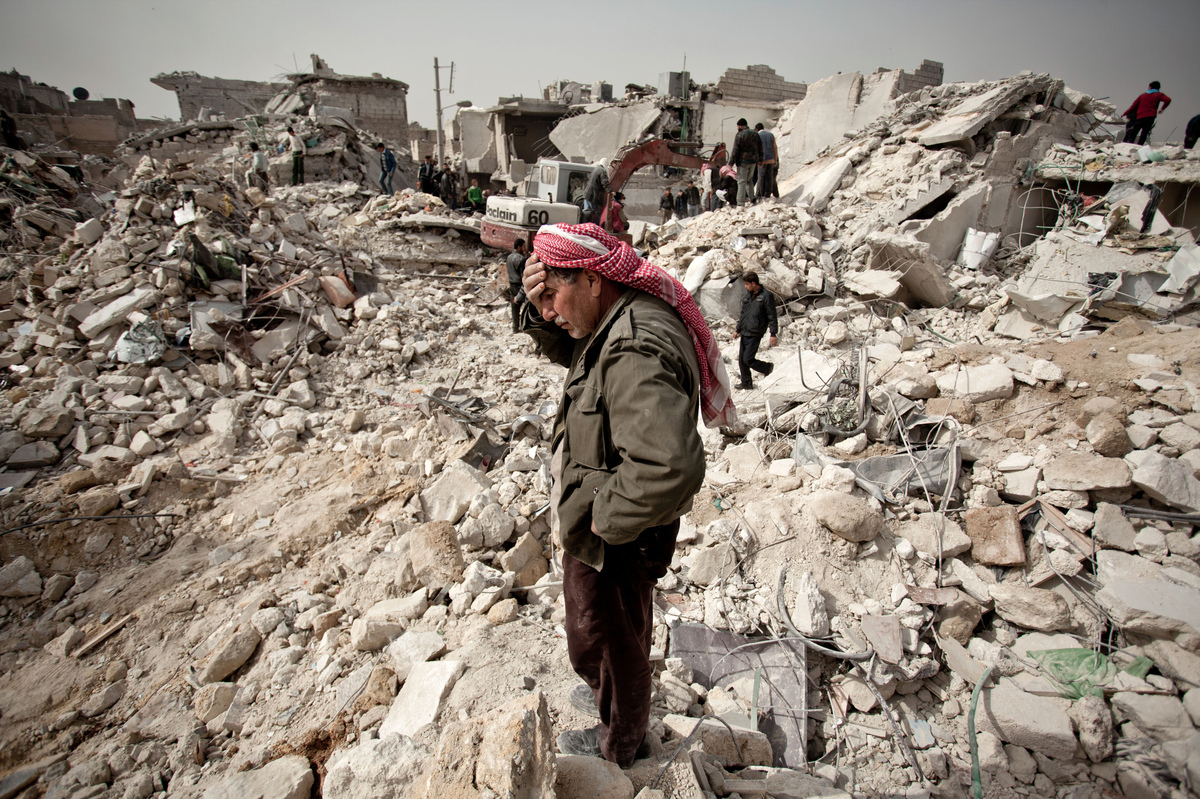 As Aleppo residents in the Tariq al-Bab district recover from this week's attack by Syrian regime forces, delegates from the city are in Turkey holding an election for local officials.

In Syria's northern province of Aleppo, the war is far from over. Yet civilians are planning a dramatic gesture: an election for a civilian government.

This weekend, delegates from across the province are taking part in the first free vote outside of the control of President Bashar Assad's regime. Its location: Gaziantep, Turkey.

While most election stories begin with the issues, the candidates and what's at stake, this election is about a first-time vote for civilian leaders in a rebel-held province. How do you hold an election when your city is being bombed by the regime you are trying to replace?

The election moved to southern Turkey because of safety concerns. The voters are limited; only 224 selected delegates will cast ballots. Still, they have to make the dangerous drive, which takes about an hour, to the Turkish border.

"It was very dangerous. The roads are prone to being bombed at any point in time," he said. "Then, we entered through an illegal crossing. There was one shot fired, in fact, probably a warning. And we said, 'We are not afraid [of] you. We've already been dealing with scuds and bombing."

Al-Hillal jokes about his trip at a Turkish cafe with a dozen doctors and lawyers who work in Aleppo. Now, they are all candidates for seats on the city council and a wider provincial government.

"It's... kind of giving a new hope with all the destroying, with all [the] killing. We will get our freedom. We will organize [ourselves.] We will do our best. So, this is what it means for us."

The entire election organization moved to southern Turkey over a weekend. An army of activists arrived to set up a media center. A new FM radio station opened to cover the elections through transmitters that reach Aleppo.

In an unfurnished apartment, an election center is already bustling. The apartment's bare rooms look more like a college dorm with floor mattresses, plastic chairs and desks. Computers and cameras are everywhere.

The election spokesman, Khalid al-Umar, a pharmacist, works as part of a medical team in Aleppo. A few days earlier, he was digging bodies out of the rubble after a missile strike flattened more than 30 houses. Now, he's putting the best spin on an election that is chaotic, with limited electors, held outside of Syria.

"It's... kind of giving a new hope with all the destroying, with all [the] killing. We will get our freedom," he says. "We will organize [ourselves.] We will do our best. So, this is what it means for us."

What this election means for civilian rule in Aleppo is unclear in a city still at war — armed rebel groups have power, and the Assad regime has stepped up missile strikes on residential neighborhoods.

Still, the majority of people living in Aleppo are civilians, says Tamam al-Baroudi, a businessman, who just arrived in Gaziantep to observe the first free vote.

International aid is finally reaching Aleppo, he says, and its distribution must be organized by civilians. Al-Baroudi says an elected council can do a lot to clean up the city and help residents organize a fair distribution of food and medicine.

"It's [a] very big problem. They can help a lot," he says. "Everybody want[s] these kind of people to work, no problem."

But how these councils are elected matters to 26-year-old Maha Grer, a Syrian activist who took part in early demonstrations against the Assad regime, when young Syrians risked their lives to call for democracy.

She is skeptical when asked if she considers this to be the first democratic election in Aleppo: "I hope so. I don't know yet. We will see in the future."

Grer is part of a workshop on election monitoring. The course is sponsored by the National Democratic Institute in Washington, D.C. Erin Mathews, the program director, says Syrian activists reached out to NDI to help ensure a fair vote for Syria's largest city.

"This workshop is about domestic election monitoring, what it means to a democratic system," Mathews says. "It's about people looking for legitimacy and credibility in a process so that people trust these councils later on. "

"It's as real as they can make it right now," she says. "If that starts with a few hundred people, that's what they have. And if it has to start outside of the country, that's the unfortunate reality for Syria right now."