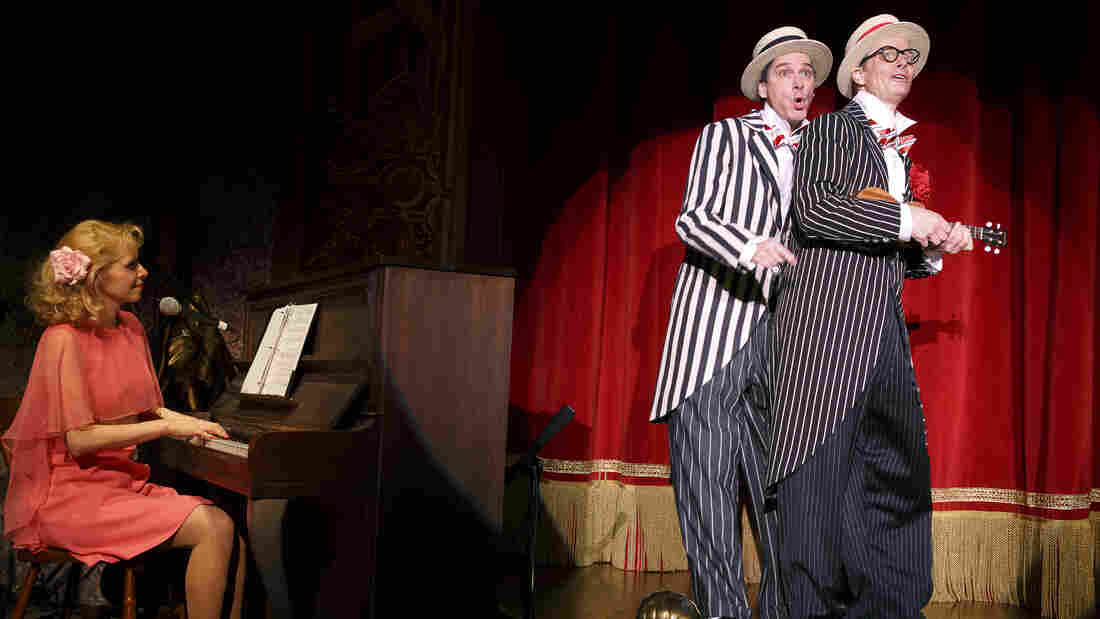 Twenty years ago, theatrical clowns Bill Irwin and David Shiner collaborated on a Broadway show called Fool Moon — a giddy mixture of slapstick, improv and audience participation that proved such a success that it came back to Broadway for two more runs and toured both the U.S. and Europe. Now Irwin and Shiner have put together a new show called Old Hats, and it's been receiving rave reviews off-Broadway.

"At a certain age, you're not the young lover anymore, and you can't even sort of pretend to be the young lover," Irwin says. "You have to embrace the stage of life that you're at. So that's — hence the title: Old Hats."

Between the two of them, Shiner and Irwin have close to 75 years of clowning experience. Irwin, a MacArthur "genius grant" winner, and Shiner, who has also starred in and directed Cirque du Soleil shows, are passionate, articulate practitioners of their art. And this time they've brought in singer-songwriter Nellie McKay to provide wry musical counterpoint to their antics.

Seeing them together in a rehearsal room on a cold January day with director Tina Landau gives some insight into the old saw that dying is easy — comedy is hard.

"The last thing you ever want to do is show any effort," Irwin says. "Even though there's a lot of work involved, and it's — you don't want to show any effort!"

The rehearsal studio is like a big playroom; there are all kinds of homemade props littered about, just in case Shiner or Irwin want to try something new. There are lots of percussion instruments to rudely accompany any physical act.

Shiner is trying out a new sketch, where he plays a sad-sack hobo on a park bench, a la Emmett Kelly. McKay improvises music to accompany him.

But Shiner finds himself struggling — the props aren't working, and he hasn't figured out how to end the sketch. Still, Shiner says he's determined to figure out how to make it work.

"It just starts with an idea," Shiner says. "And for example, I've always wanted to do a hobo. Always. And I never did it. And I thought, well, 'Darn it! Do it now!' " 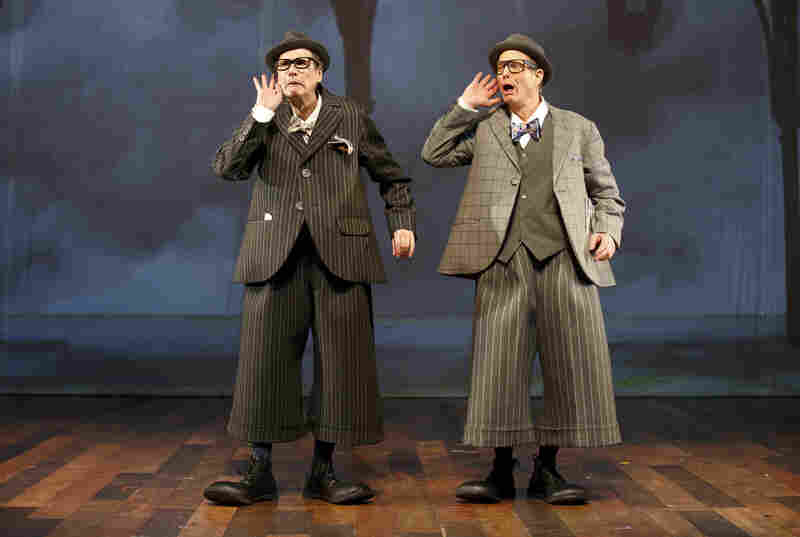 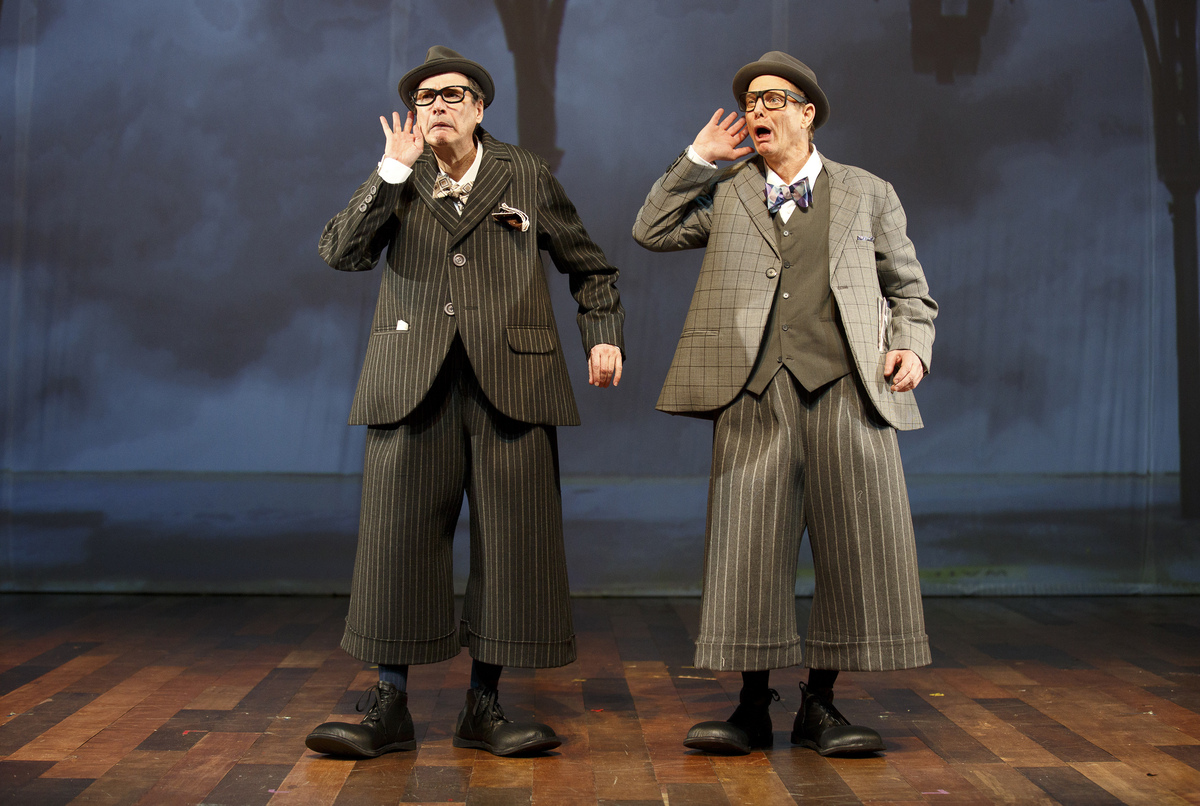 Shiner and Irwin last collaborated in Fool Moon, which premiered on Broadway in 1992.

Six weeks later, Irwin and Shiner have almost finished three weeks of previews and are gearing up for opening night. The hobo sketch now has a sweet ending. But like all artists, they're worried about how it's going over.

"This kind of work doesn't exist until you get it in front of an audience," Irwin says. "It's just pure speculation, when you're in the rehearsal room."

"It's so excruciating because the first few nights, things that you thought were gonna work don't work at all — they don't land," Shiner says. "And then you're ready to throw the whole piece out. You go home thinking , 'God, what a disaster this is!' And you go through the whole gamut; it's just this roller-coaster ride of emotions."

They needn't worry. The night I saw it, the audience was laughing heartily at the sketches. One of the funniest — and one which cleverly melds video and projections with live action — is what Irwin calls "The iPad Sketch." He plays a modern businessman in an oversized suit who ends up in a battle with his own image on an iPad and a smartphone.

"The place these things have in our culture is so fascinating and so potentially, eh, useful for a clown that I just said, 'Oh, we have to have piece in the show where a guy is totally mesmerized by his two pieces of equipment and then they take over his life, in a bad dream way, from thence!' " Irwin says.

When Irwin and Shiner are offstage, making quick costume changes, McKay sings some of her offbeat songs with a band — sometimes she's playing piano, sometimes her ukulele.

"And she's totally wacky and incredibly smart," Irwin says of McKay. "I mean her songs, her lyrics, her music is so smart in the milieu of the wacky blond. So it is a wild mix."

The most unpredictable sections of the show feature audience participation — and they also happen to be the funniest.

I have now seen David Shiner do his second-act sketch — where he takes four audience members onstage to help him make a silent movie set in the Wild West — five times. By the end, he gets a man and woman who've never met to kiss each other and another man to have a temper tantrum onstage, while another guy plays a stagehand who scratches his butt. It always works, and I actually know why — since the last time I saw it on Broadway, Shiner pulled me up onstage.

But I'm not telling how.

"I love doing that stuff," Shiner says. "I love bringing people up that are unprepared and don't know what they're getting themselves into and pushing them to the limit. I love walking a high wire like that. You know, trying to keep that whole thing in balance."

David Shiner, Bill Irwin, Nellie McKay and random audience members will be performing in Old Hats at the Signature Theatre off-Broadway through April 15.