Accessibility links
For Baby Boomers, Lessons In Financial Basics The generation that came of age in the 1960s is beginning to retire. Born after World War II, they grew up in an era of rising living standards, but the Great Recession destroyed any sense of financial security. Now they face challenges, including putting their kids through college and caring for their parents. 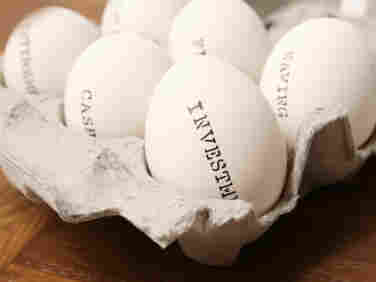 The oldest of the baby boomers came of age in the 1960s and are beginning to retire. Their younger cohorts are still putting kids through college and building careers. Baby boomers are a giant portion of the population — 78 million people, by one estimate.

They grew up in an era of rising living standards, but the Great Recession destroyed any sense of financial security — and many nest eggs. Financial planner Tim Maurer outlines a variety of issues boomers face.

Who is a baby boomer, and what defines their financial situations?

"The age range is vast — anyone from 48 to 67 — so we're really talking about a couple of generations within the baby boomer generation. Some of them are now in retirement. Their kids are out of the house. And some of them are still in the thick of getting kids through college in their peak expense years, but also their peak income-earning years. And obviously this is all taking place within one of the most confounding periods of time in financial history. There's an awful lot of confusion, a lot of market volatility and economic uncertainty, so a lot of questions on that front."

How much income can be generated in retirement?

"We're really looking at three different sources [of income]. If they're one of the few who still have a pension, that would be a great benefit. Then they will also have some sort of Social Security. The baby boomer generation is expecting quite a deal from Social Security, actually. Some of them will be getting up to $2,400 per month of income from Social Security. And then they have their retirement savings.

"An easy way of getting an idea of how much income your retirement savings can generate is that you add it all up and you multiply it by .04. That is the equivalent of 4 percent, which would be a reasonable rate of return that you can expect to take out of your investment dollars. If you take the pensions, add the Social Security and add 4 percent of the retirement savings that they currently have, that will give them a good idea of what they can reasonably generate in terms of income today."

Adult population, 25 and older. Highlighted bars show the ages of the people born during the peak years of the baby boom.

What are their immediate financial issues?

"The baby boomers truly are our first sandwich generation, where they have concerns of their parents, who are still living, possibly having to help fund them in their old age. We're also talking about the expectation of baby boomers: This is the first generation that was expected to put their kids through school. ... Many of them did take on the financial obligations for their children's education."

What kinds of investments should boomers be in?

"Boomers have really [ridden] the roller coaster of the market because they grew up professionally in the 1980s; 1982 to 2000 was the longest bull market stretch that we've ever seen in this country. And so they grew up basically believing that if they just plowed money into the market, it was going to make all of their dreams come true. From 2000, 2001, 2002 — the three-year stretch where the bubble burst in the tech market and 9/11 hit — I think that they were all scared. If they were scared in those three years, 2008 really scared them into a cocoon, and they never wanted to come out again. And just over the course of the last several weeks was the [Dow Jones industrial average] reaching 14,000. So if they just did hang on for the ride throughout all of that volatility, now is the time when I'm saying to them, 'It is time to put together a truly diversified, more conservative, balanced portfolio that will be able to provide you with income throughout your retirement.' "

Is this a generation on top of estate planning?

"The generation is not, but I think few generations are. I think what's important about estate planning for baby boomers is now they are actually glimpsing needing to utilize these documents with a higher degree of probability. In other words, baby boomers are possibly glimpsing down the road when they will be leaving this Earth, and it makes the will that much more important, but because they have assets, because they have concerns about health care. It also makes the powers of attorney and the advanced directive, the living will document and the health care power of attorney all the more important as well. They should also be thinking of their parents, who are still alive, and that imminent need for their estate planning documents to be completed."