Accessibility links
Author Interview: Pat Summitt And Sally Jenkins, Authors Of 'Sum It Up' Pat Summitt grew up on a rural farm and went on to a stellar career in basketball. As head coach of the Tennessee Lady Vols, she won more games than any other basketball coach in NCAA history. Her new memoir, Sum It Up, records her memories even as she is losing them to Alzheimer's. 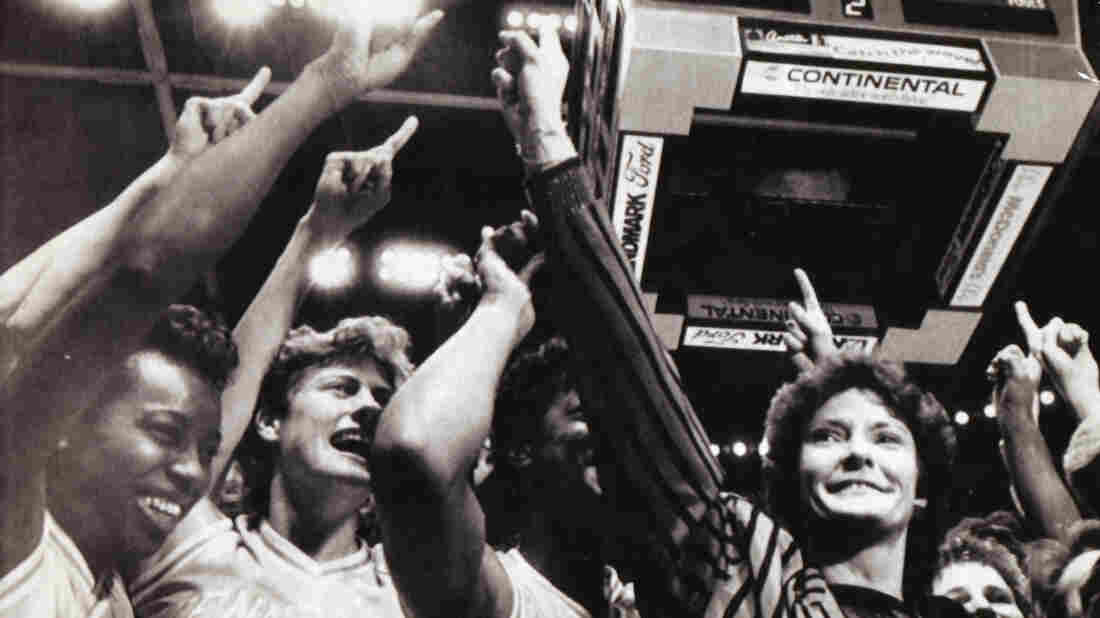 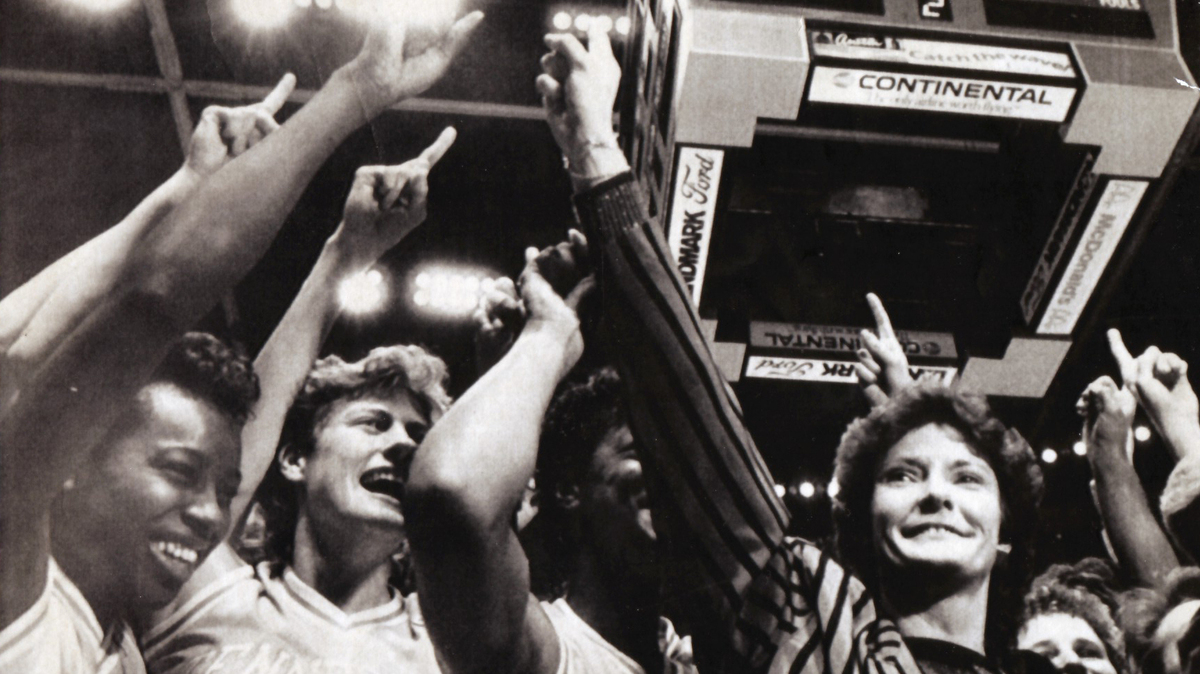 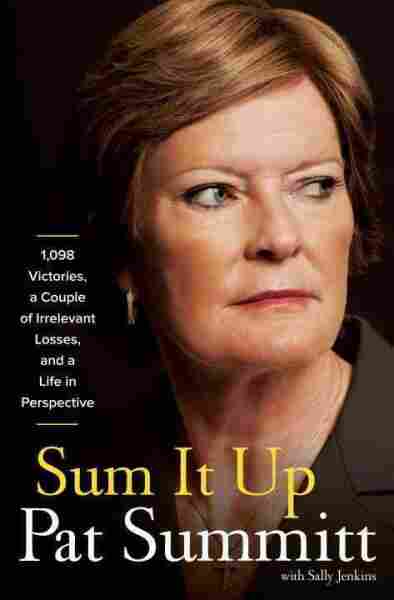 1,098 Victories, a Couple of Irrelevant Losses, and a Life in Perspective

by Pat Summitt and Sally Jenkins

Title
Sum It Up
Subtitle
1,098 Victories, a Couple of Irrelevant Losses, and a Life in Perspective
Author
Pat Summitt and Sally Jenkins

The image of Pat Summitt for many fans is that of a madwoman, decked out in orange, yelling to her players from the sideline. In 38 years as the head coach of the University of Tennessee Lady Vols basketball team, Summitt shouted her team to more victories than any other coach in the history of college basketball — men's or women's.

Now the famously fierce coach is facing an opponent unlike any other: In 2011, she was diagnosed with early-onset Alzheimer's disease.

"When I first was diagnosed, I was in disbelief," Summitt tells NPR's Linda Wertheimer. "But after that, I knew what I was facing, and I wanted to get it out there. And that's exactly what I did."

She went public with her diagnosis, and it's the first story she tells in her new memoir, Sum It Up. Co-authored with sports writer Sally Jenkins, Summitt's memoir captures her life story even as her memories fade. Summitt and Jenkins join Wertheimer to talk about Summitt's youth on a farm, the transformative power of Title IX, and her life post-diagnosis.

Summitt grew up as Trisha Head, in the tiny town of Henrietta, Tenn., in a family she describes as "hardscrabble." "Growing up on a dairy farm, we had cows — we had to milk 'em 5 a.m. and 5 p.m.," she says. "My parents, they just really made all of us aware of what we had to do every day when we went to work. And so, you know, I think it was a good thing for me."

The hard work on the farm was followed with equally hard play: drag racing on country roads and basketball games in the hayloft of the barn. Shooting hoops with her brothers, Summitt first saw equality on the court; they didn't care that she was a girl, and they didn't let her off easy. "Let's just say we were in the hayloft and we just started battling," Summitt says. "It was something that we loved to do ... yeah, we fought a little bit." 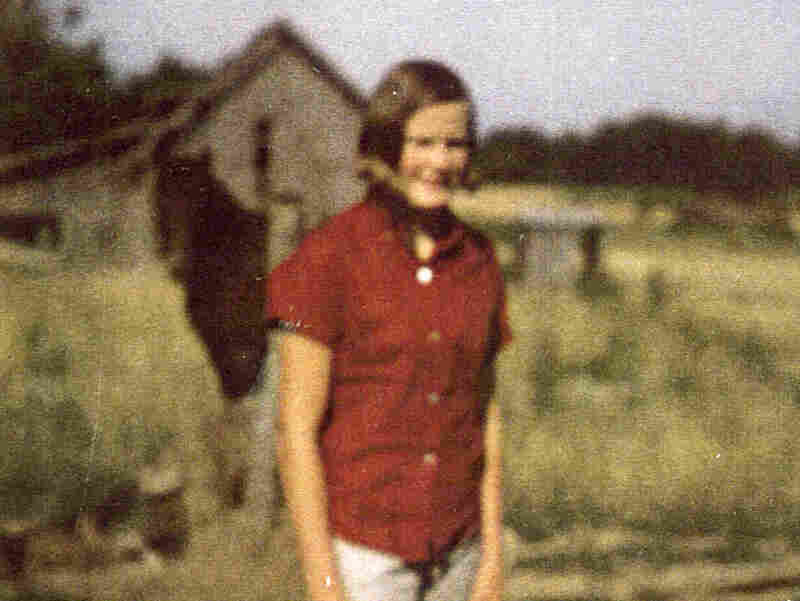 Pat Summitt, the skinny girl they called "Bone," standing in front of the hay barn where she played ball with her brothers. Courtesy of the Head family hide caption 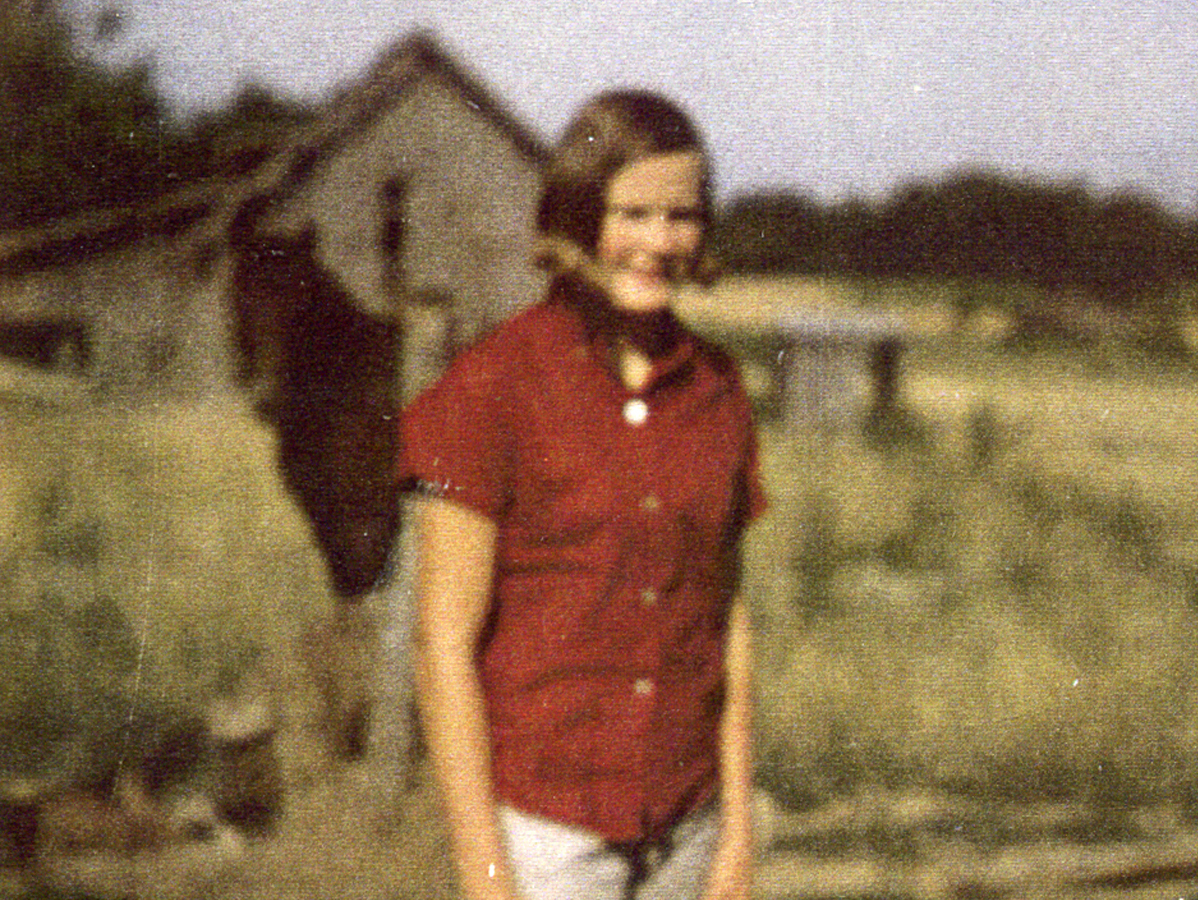 Pat Summitt, the skinny girl they called "Bone," standing in front of the hay barn where she played ball with her brothers.

Courtesy of the Head family

That competitive spirit led to a highly successful career, one Summitt describes in her book as "a straight determined march forward." She was head coach of women's basketball at the University of Tennessee at the age of 22, and in 1976 she played in the first Olympics that recognized women's basketball. She credits her father with helping her achieve such goals: "My dad is the one who said that's what I needed to do," she recalls. "I was like, 'I don't know if I could be an Olympian ... ' But my dad really influenced me to stay and be in the Olympics."

Although Summitt's father didn't talk much or express much love, he was a vital presence in her life. "He treated me like one of the boys, and I kind of liked it that way. Because being on the farm, you know, everybody had to go to work every day, and he knew that I was going to go to work like the guys did."

That egalitarian spirit shaped Summitt's life, and eventually a similar attitude in Congress transformed her career. While Summitt was still a college student, Congress passed the Equal Opportunity in Education Act, which included Title IX. Over time, just as the young coach was beginning her career, this led to an enormous expansion of college sports programs for women. 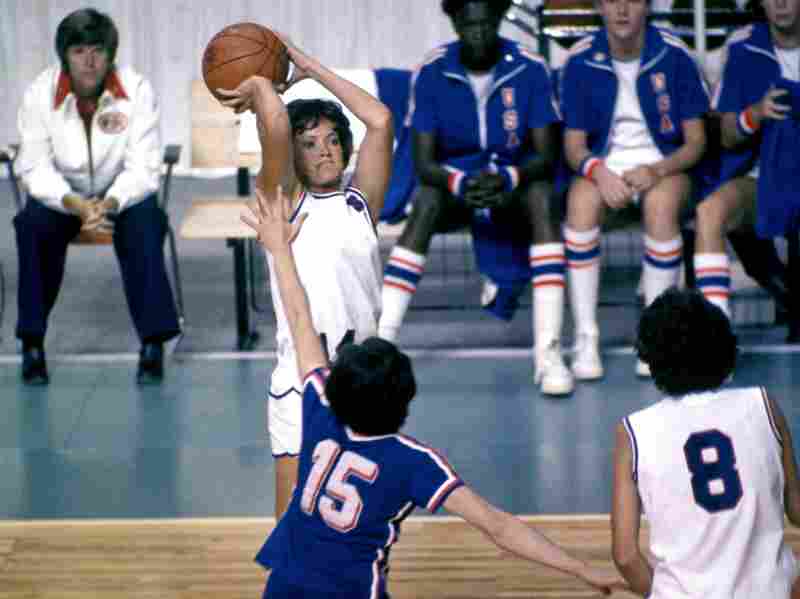 In 1976, Pat Summitt was co-captain of the U.S. Olympic women's basketball team. The team finished with a silver medal. Courtesy of Rich Clarkson/Rich Clarkson hide caption 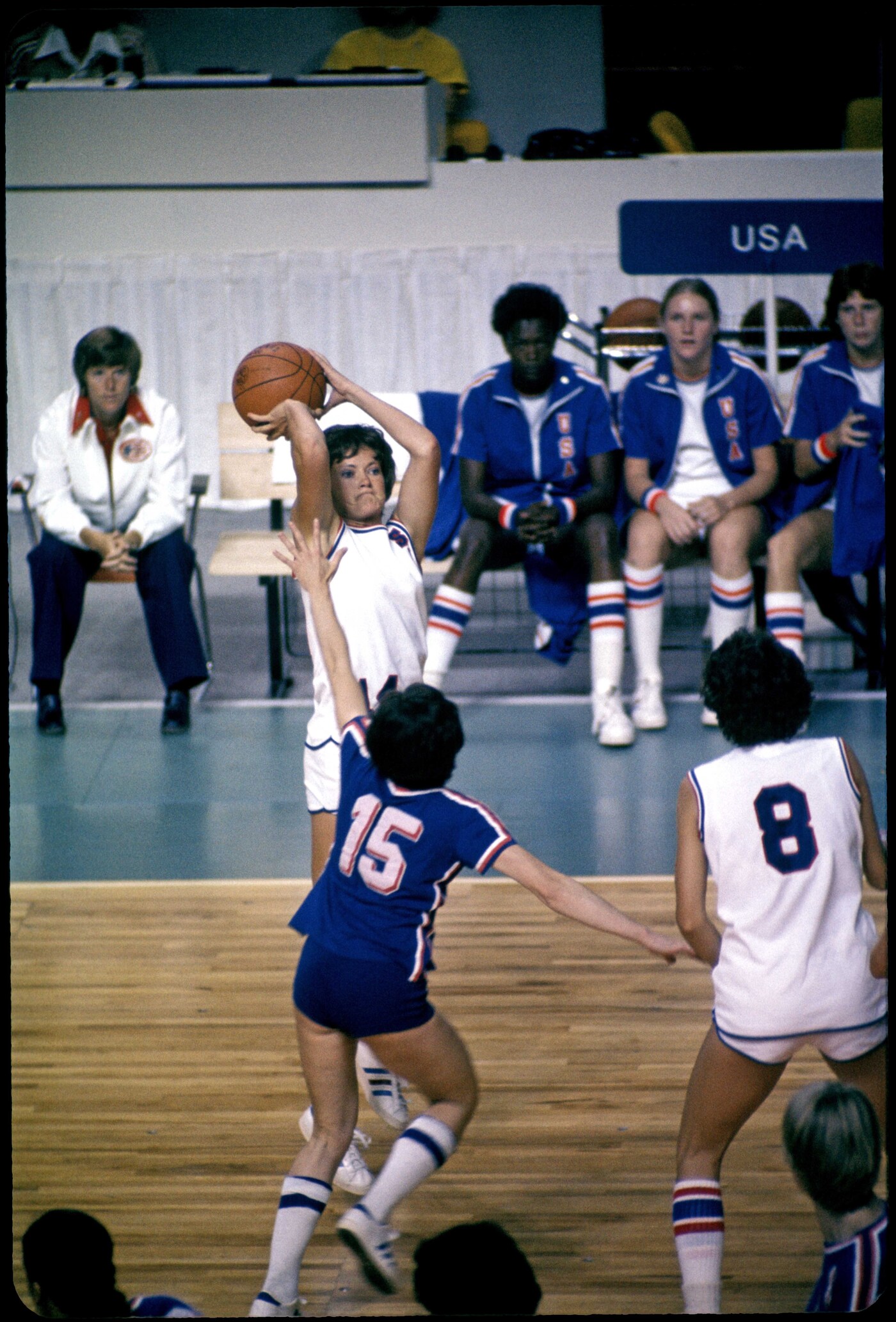 In 1976, Pat Summitt was co-captain of the U.S. Olympic women's basketball team. The team finished with a silver medal.

"It just opened the doors for a lot of players that wanted to play basketball," Summitt remembers. "We didn't have to go play with the guys. We just did what we wanted to do ... I thought it was important. That was the best time of my life as far as coaching."

"We had a conversation years ago," Jenkins says. "I asked Pat if she was a feminist. And she said, 'No, I'm not a sign carrier.' And I said, 'Well, I know what you are — you're a subversive.' And she said, 'That's exactly right.' I think Pat took the concept of athletics that was used to define confidence and excellence for men, and stole it and gave it to women."

For Wertheimer, it's Summitt's toughness that stands out above all — the coach is renowned for how hard she could be on her players. But Summitt doesn't believe she was ever too rough on the athletes she coached. "I think you can challenge people, but you don't want to break people down. But you've gotta, sometimes, just pull them aside and say, you know, 'You're OK, but you could be better.' " 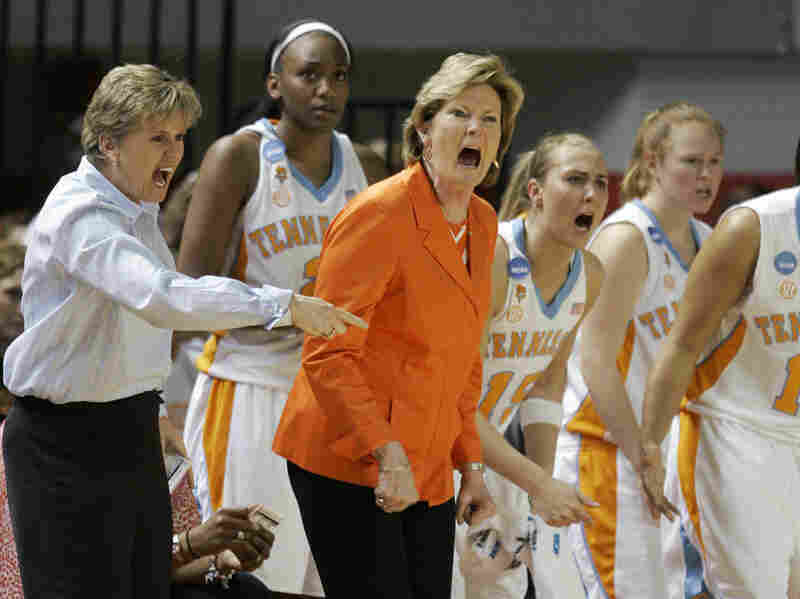 During the second half of a 2009 game that Tennessee lost to Ball State, Pat Summitt and assistant Holly Warlick react from the bench. Ed Reinke/AP hide caption 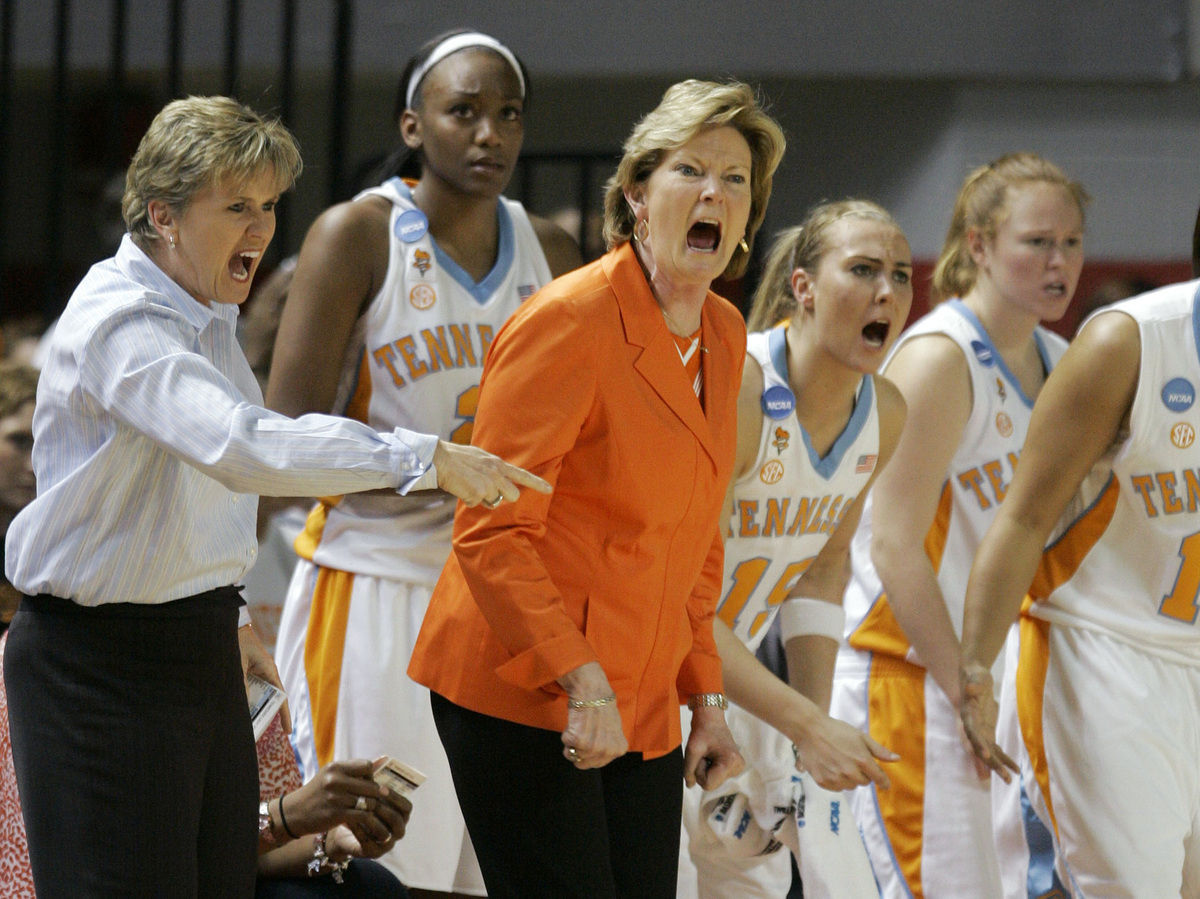 During the second half of a 2009 game that Tennessee lost to Ball State, Pat Summitt and assistant Holly Warlick react from the bench.

With high expectations and tough love, Summitt coached the Lady Vols to eight national championships, taking a team with no uniforms, no dressing rooms and no attention, and transforming it into the superstar team of women's basketball. Her book is full of happy memories from that illustrious career, but now Summitt cannot always call them up. Some of her memories — even of key moments in important games — just aren't clear.

In her memoir, Summitt was asked if she would trade her trophies for her health. She hesitated and finally said, "I'd give up all my trophies to still be coaching."

"I love the game," she tells Wertheimer. "I miss it now — not coaching, but I am moving on in that regard ... I go to practice every day. I love being around the student-athletes. That's something that I'll always like."

Read an excerpt of Sum It Up