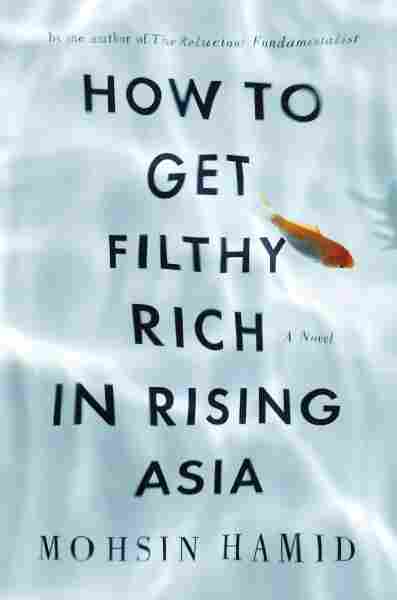 This is not the first time Pakistani author Mohsin Hamid has taken a risky approach to a novel. His The Reluctant Fundamentalist was written entirely in the second person. The bearded narrator of that book sits at a tea stall in Lahore, talking about his drift toward extremism while directly addressing "you," the reader, who is taken to be an increasingly jumpy and terrified American across the table.

Hamid returns to the second person in How to Get Filthy Rich in Rising Asia, but this time it's in the form of a self-help book — a particularly sly one. He begins with a disclaimer: "A self-help book is an oxymoron. You read a self-help book so someone who isn't yourself can help you." It is only the author who is helping himself.

The author of this particular self-help book is in his early 40s, a Pakistani with an American education and a past as a business consultant in both countries. His crisp voice could have suited an old-style newsreel narrator, and when you read the sentences of his slender novels, it is easy to hear that voice speaking them. That voice tells "you" how to get filthy rich in rising Asia, and in doing so, Hamid tells the story of a rural youth who moves to the city and begins making the brutal compromises that a poor boy must make to get ahead. The chapters have titles such as "Move to the City," "Avoid Idealists" and "Be Prepared to Use Violence."

When I began reading How to Get Filthy Rich, I wondered if the author would really be able to sustain this device for the entire book. He proves that he can (our reviewer Alan Cheuse compared it to The Great Gatsby, while The New York Times called Hamid "one of his generation's most inventive and gifted writers") but he does not try to maintain the illusion for too long. The novel is 228 pages of well-spaced type.

"I take six or seven years to write really small books," he said when we talked. "There is a kind of aesthetic of leanness, of brevity. In Pakistan recently we had these two big literary festivals, one in Lahore, one in Karachi, and I met literally thousands of college students that are first-generation English speakers reading novels ... in English." Thinking of such audiences prompts Hamid to aspire to write novels he calls "complicated, uncompromising, hopefully sophisticated," but also short and "easy to read."

As he spoke, I imagined that perhaps the book started out at a thousand pages and then he hacked it down like a statue from stone. No, he said: he carves several statues. "I don't necessarily throw away lots of pages, but I stumble around, you know, for years trying to figure out how to do it. ... The first couple of drafts of this thing weren't a self-help book at all."

One of these alternative versions of the novel featured Pakistani boys who were from the mountains near Afghanistan, but who, in the novel, would not be represented speaking in the accents of those hills. Hamid proposed instead to use the twangy English of a different mountain range, the Appalachians in the United States.

It's a delightful notion. I was reminded of a Washington production of Shakespeare's Two Gentlemen of Verona that set the play in Verona, New Jersey, with all the accents that would imply. "When we hear people speak," Hamid said, "so much of what we get is the way they speak, and so, you know, finding the right form for a story, the right voice for a story, is at the heart of it for me."

This makes the final form in How to Get Filthy Rich all the more striking. The main character rarely speaks in the course of the narrative. He can't. The main character is "you." Hamid is telling "you" how your life will unfold. On the occasions when "you" are described speaking — correcting a teacher in school, for example — you suffer for it. By and large you do not seem like a man who can articulate his feelings. Yet the main character speaks powerfully through his ambition and his longing. He does move to the city. He does avoid idealists. He does get rich, for a time anyway, even if he must grow accustomed to violence.

His thoughts dwell less on success than on a woman he has known since childhood, in contact but elusive throughout his life. This aspect of the story gradually makes it apparent that Hamid has invested the lowly form of the self-help book with considerable ambition.

"There's a form of poetry, Sufi poetry, which is Islamic mystic poetry," he explains, saying he would like to think of the book as "a secular Sufi poem. ... Contrary to what you often hear about [other brands of] Islam and its representations in America, this is a form that really says the way to relate to the universe — to God, to the divine, to mortality, to life — is through creating a sense of love."

The main character's encounters with the "pretty girl" are among the novel's most memorable. Maybe this is the "help" that the author of the self-help book is offering "you": a reminder of the importance, as Hamid says, of "having a love for something other than yourself."