Accessibility links
In Post-Revolution Egypt, Fears Of Police Abuse Deepening Widespread police brutality under Hosni Mubarak helped fuel the uprising of 2011. But two years later, many say the police have begun to act like armed gangs, meting out collective punishment in restive areas. The police say they are the victims, under attack by anti-government protesters. 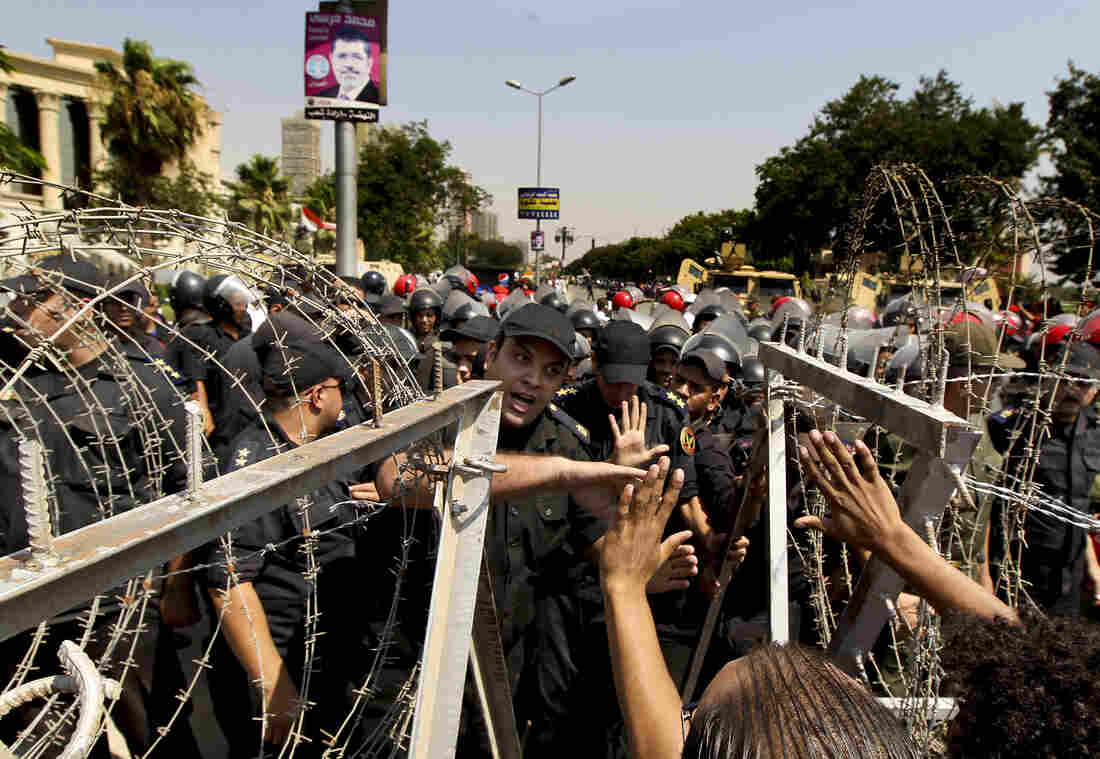 An Egyptian military police officer argues with protesters during a demonstration on June 14, 2012, outside the Supreme Constitutional Court in Cairo. Marwan Naamani/AFP/Getty Images hide caption 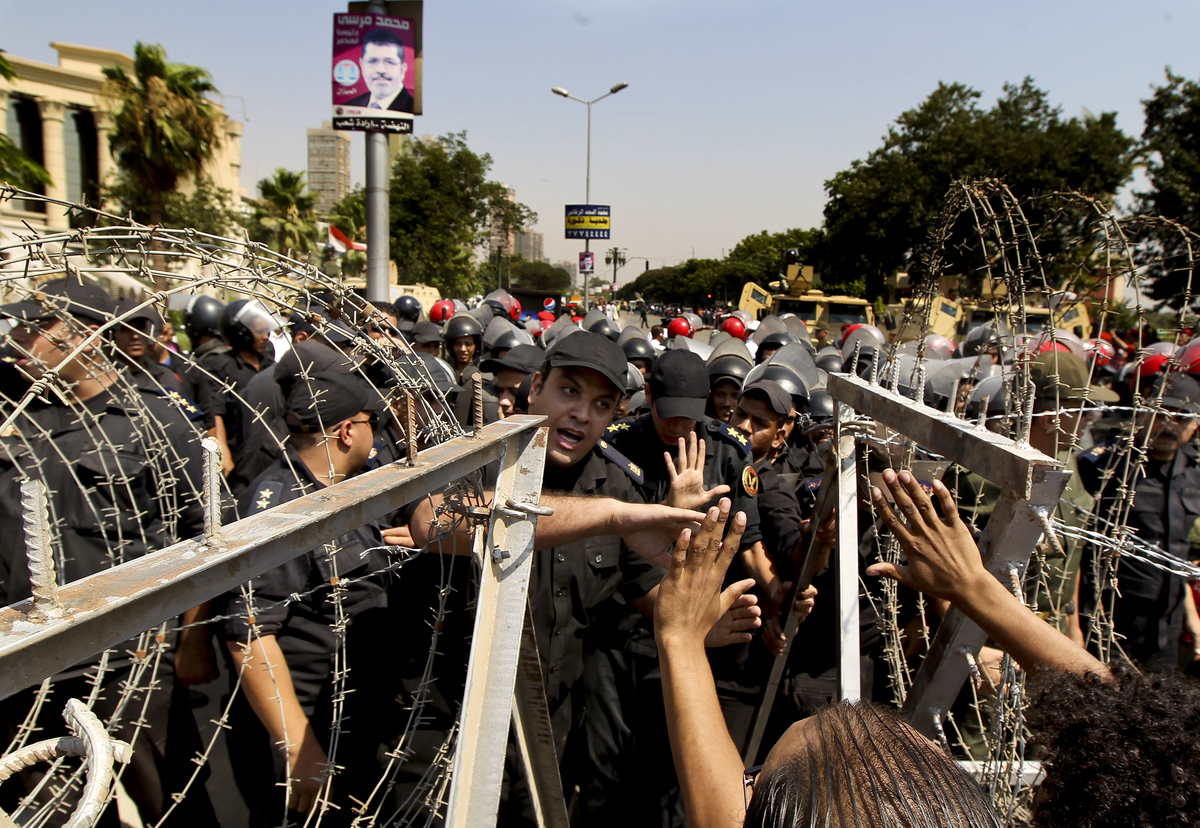 An Egyptian military police officer argues with protesters during a demonstration on June 14, 2012, outside the Supreme Constitutional Court in Cairo.

Egypt's police force was the underpinning of former President Hosni Mubarak's iron-fisted regime, and it quickly became the enemy of Egypt's 2011 revolution.

Yet there has been little to no reform of the police force to date. Human rights groups say the police have begun to act like armed gangs, laying down collective punishment in restive areas across the country. But the police say they are the victims, under constant attack by anti-government protesters.

On Feb. 16, a young policeman, Hesham Taema, was shot and killed as he responded to an armed dispute in Beni Suef, a city of more than 200,000 people in the Nile Valley south of Cairo. But the man accused of killing the police officer was not arrested.

[The police are] acting like an armed gang or a militia with their own interests that they're trying to protect.

Instead, Hossam Abol Regal was punished brutally and publicly.

Mourners from the policeman's funeral grabbed Abol Regal off the street. A mix of gun-toting policemen and relatives of the victim beat him unconscious, stripped him and put him on top of a truck. He was then driven through the main streets of Beni Suef as a warning against cop killers.

All of it was caught on video, and all of it happened in front of top officials in the province, witnesses say, and not one tried to stop it.

Later, Abol Regal's family and friends stormed the hospital where he was being treated and took him away.

The police were all-powerful under Mubarak, and their widespread brutalities provided fuel for the uprising. But two years after the revolt, there's been no reform, and in fact the abuse has only worsened, says Karim Medhat Ennarah of the Egyptian Initiative for Personal Rights.

Ennarah has documented police abuse since the revolution. In just the past few months, he says, more than 60 people have been killed in clashes with the police. 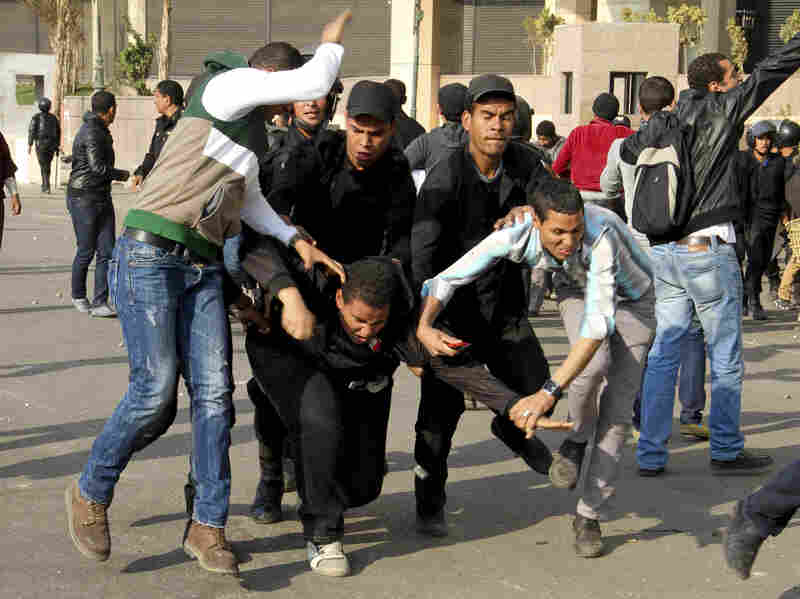 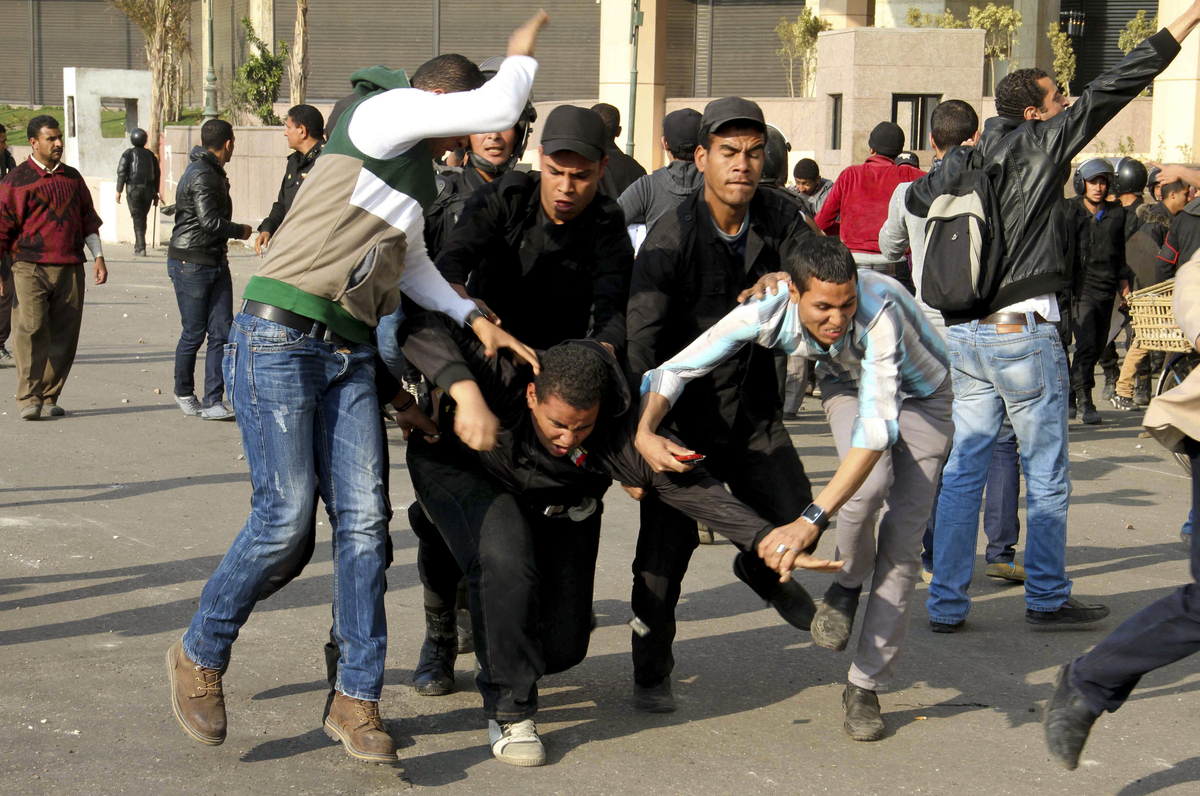 Egyptian policemen arrest an alleged rioter during clashes in Cairo on Wednesday.

"It's very clear to me that they believe that they're in conflict with the population," he says. "And they just want to be armed to the teeth and have less regulation over how they can use force and firearms."

But the most disturbing development, he says, is the collective punishment police are raining down on neighborhoods across the country.

In December, after a policeman was killed in the city of Minya, Ennarah says, police terrorized a whole neighborhood and shot a 9-year-old girl — all documented on video.

When a policeman was killed in Suez, police responded by firing indiscriminately, killing nine people.

And in the Suez Canal city of Port Said, where clashes with police have been the most violent, more than 40 people have been killed, including five policemen. Violence there continues.

Instead of enforcing rule of law, Ennarah says, the police are taking revenge.

But the police see things differently.

Police Say They Are On The Defensive

Ahmed Helmy, Egypt's deputy minister of interior, says his officers have become the favored target of protesters who torch government buildings, attack police and goad them to fight.

During an interview in his spacious Cairo office, Helmy repeatedly denies any wrongdoing by the police.

A young man who disappeared during a protest and was later found dead with bruises on his body and strangulation marks on his neck? Helmy says he was hit by a car.

Implementing human rights and protecting human rights has become a main foundation, the main belief, of all those working in security bodies. These rumors about us are because of political conflicts. And there is no proof.

A man who was beaten and stripped by police on live television? The police didn't strip him nor beat him, Helmy says.

Excessive force in Port Said that left dozens dead? Helmy says people were trying to break into a prison with weapons.

"Implementing human rights and protecting human rights has become a main foundation, the main belief, of all those working in security bodies," Helmy says. "These rumors about us are because of political conflicts. And there is no proof."

Helmy is angry that the police have become a buffer between the government and protesters. Police conscripts work 24 hours a day, sometimes for 20 days straight. They are being hit with rocks and Molotov cocktails. Some are being shot at.

"Protesters in the U.S. or in Europe stand with a poster that says, 'Down with Obama,' or 'I want to work,' right?" Helmy says. "But they do not carry weapons, they don't fire birdshot. They don't attack with Molotov cocktails. They don't throw rocks at the police."

The police can only take so much, Helmy says. Already, policemen are protesting — demanding more weapons, higher wages and protective gear to deal with protests against President Mohammed Morsi's Islamist leadership.

If protests continue like this, says Helmy, the police force may collapse. Our goals are simple, he says: justice and security. 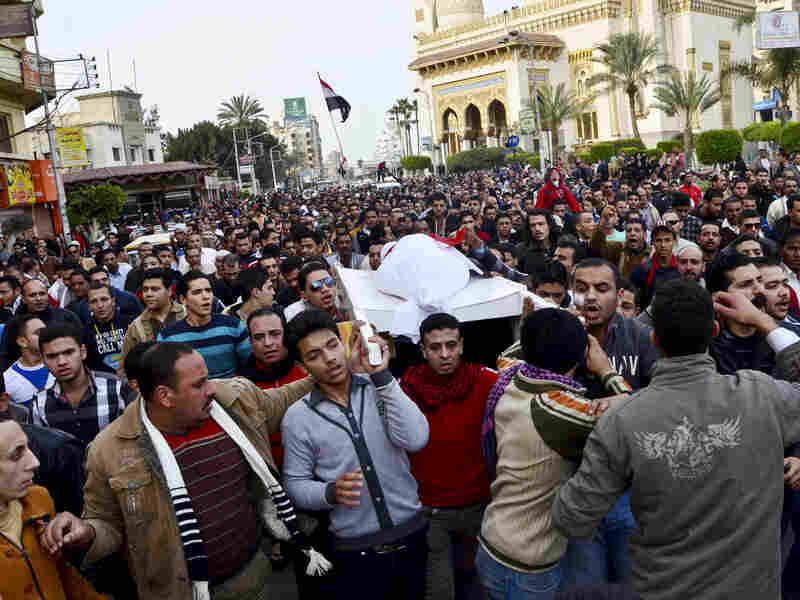 Egyptians carry the body of a person killed in clashes between police and protesters in Mansura on Saturday. Mansura is the latest province to launch a campaign of civil disobedience, following in the footsteps of the canal cities of Port Said, Ismailiya and Suez. -/AFP/Getty Images hide caption 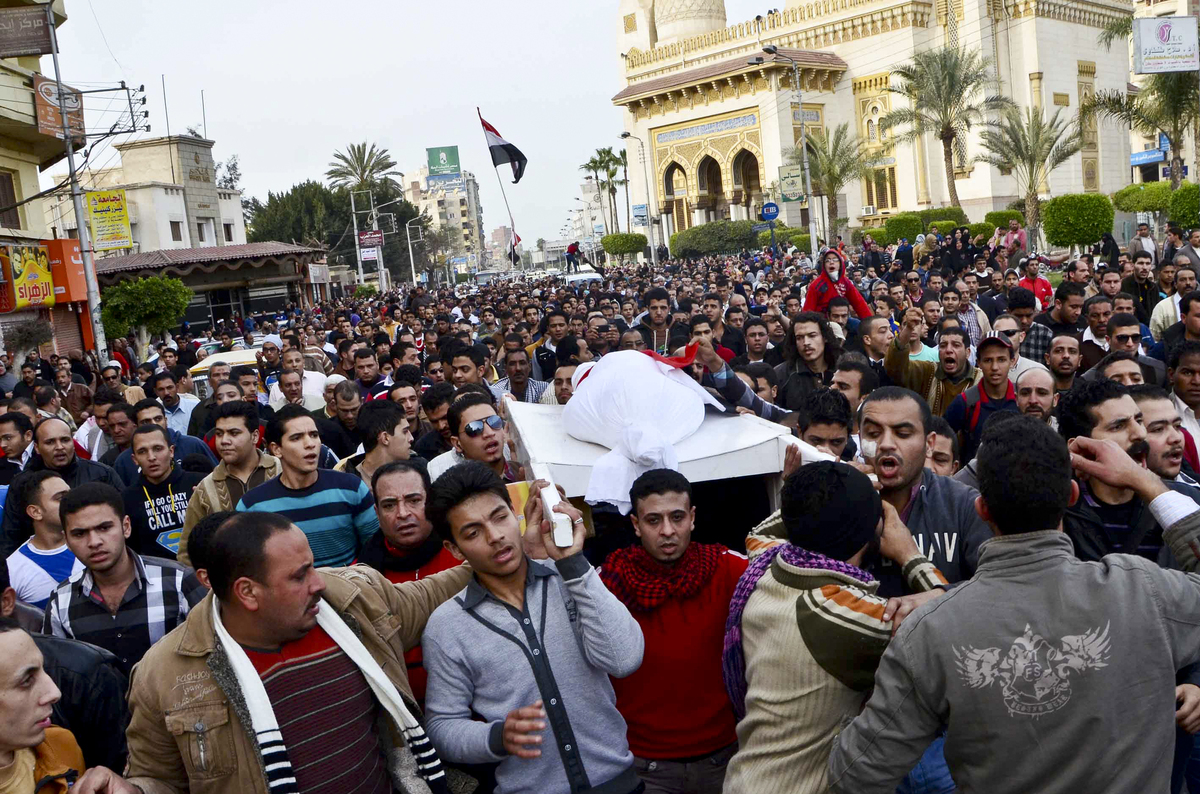 Egyptians carry the body of a person killed in clashes between police and protesters in Mansura on Saturday. Mansura is the latest province to launch a campaign of civil disobedience, following in the footsteps of the canal cities of Port Said, Ismailiya and Suez.

Back in Beni Suef, in the alleged cop killer's neighborhood, residents say the police did not bring justice.

In a residential building there, apartment after apartment has been ransacked; doors are splintered from being kicked in. On the floor: smashed china, a toilet bowl pulled up from the floor. There are at least 30 destroyed apartments; the inhabitants are staying with friends and family, unable to pay for the repairs to make their own homes livable again.

A young man says the police are taking revenge.

When the police come, Ahmed Mohammed says, they say what the officer's brother said when he was killed: No one will sleep on a bed in this neighborhood when my brother is sleeping in the dust.

Relatives of Abol Regal, the man accused of killing the policeman, also remain angry. One has set up a table on the unpaved street outside her house, displaying Abol Regal's bloody clothes for all to see. A young girl, also a relative, has a black eye, where she says the police hit her.

Although his father and uncle remain in jail, Abol Regal is no longer in Beni Suef, the family says. He is being treated somewhere safe.

Previous online and audio versions of this story incorrectly reported that a 9-year-old girl who had been shot in the head in Minya, Egypt, had died.