Accessibility links
Vatican Clamps Down On U.S. Cardinals' Media Briefings At the Vatican, cardinals continue to noodle over when to hold the conclave to choose the next pope. There has been intense global interest in the process, and American cardinals have been at the forefront in briefing reporters and controlling the message. But the Americans have been told to put a lid on it. 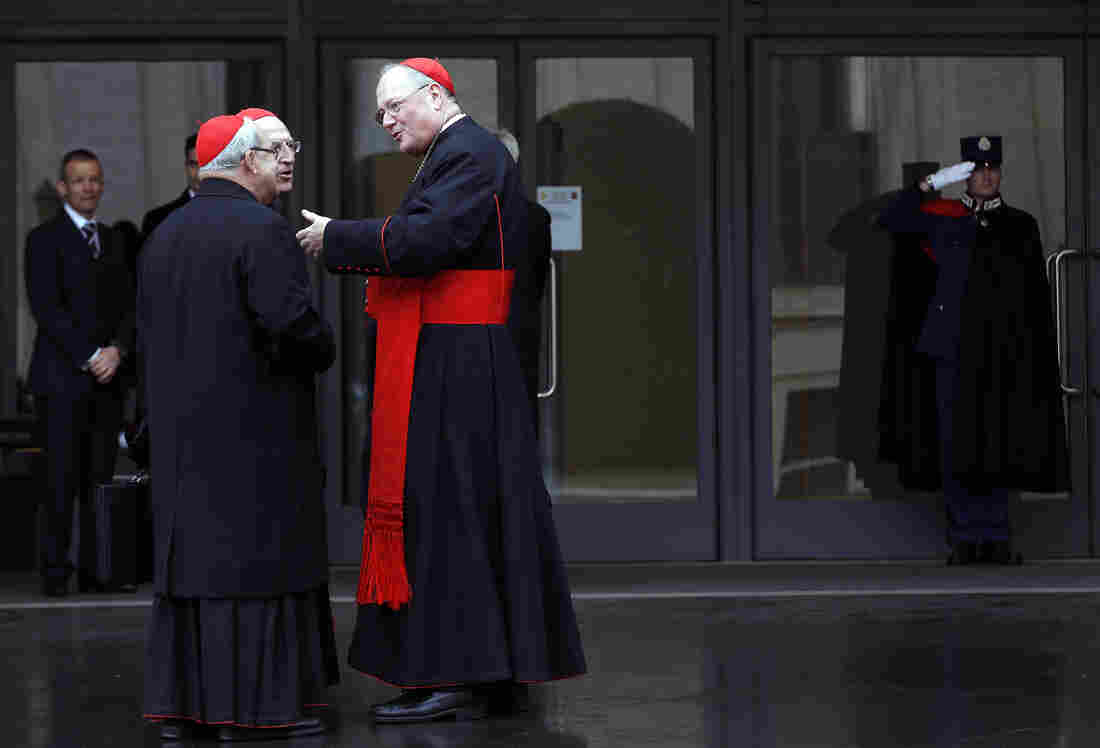 U.S. Cardinal Timothy Dolan (right) chats with other cardinals as they arrive for a meeting at the Synod Hall in the Vatican on Thursday. Alessandro Bianchi/Reuters /Landov hide caption 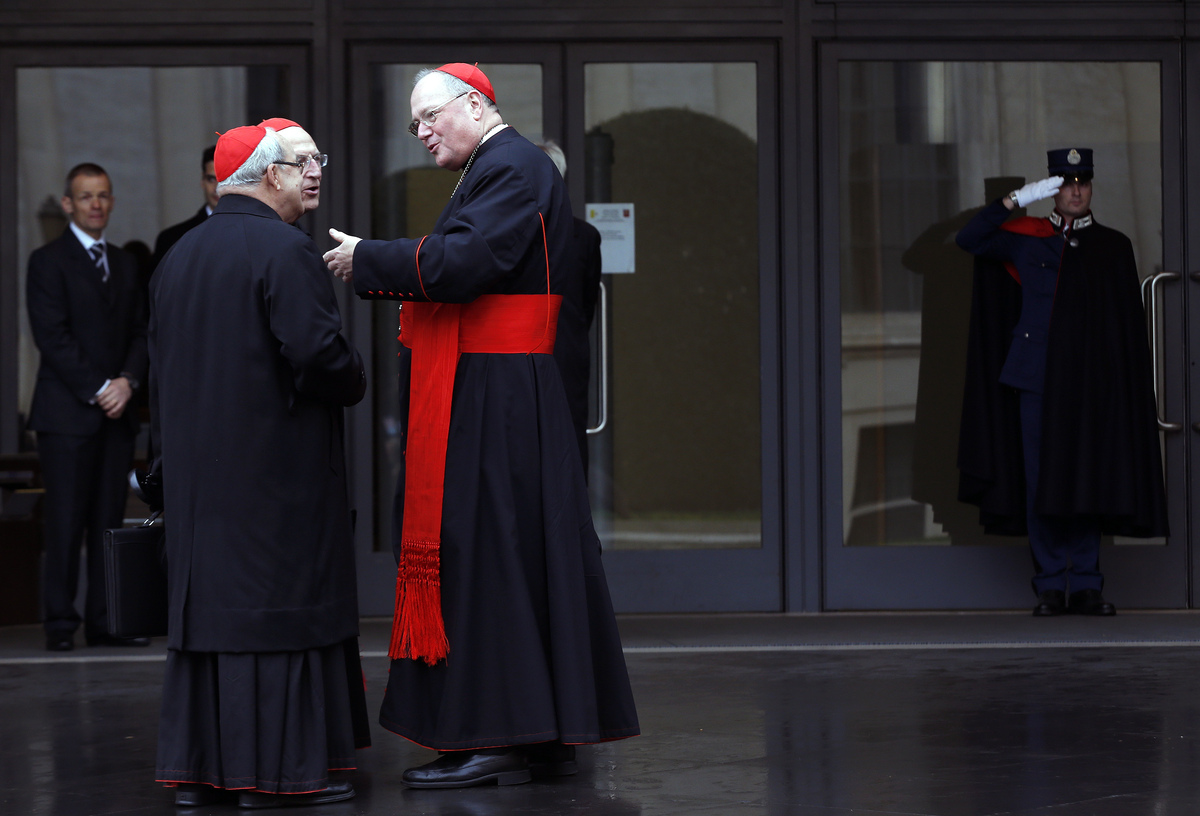 U.S. Cardinal Timothy Dolan (right) chats with other cardinals as they arrive for a meeting at the Synod Hall in the Vatican on Thursday.

As Roman Catholic cardinals prepare to elect the next pope, old-style Vatican secrecy has prevailed over American-style transparency.

Under pressure from Vatican-based cardinals, their American counterparts canceled their daily briefings that drew hundreds of news-starved journalists.

The clampdown was part of what is shaping up as a major confrontation over the future of the church between Vatican insiders and cardinals from the rest of the world.

The American cardinals are just more used to being open and talking to the press and answering questions in public. Rome just doesn't like to operate this way.

Just an hour before the scheduled American briefing, an email announced it had been canceled.

In a terse statement later, the spokeswoman for the American delegation, Sister Mary Ann Walsh, said "the U.S. cardinals are committed to transparency," but due to leaks in the Italian media that breached the cardinals' oath of secrecy, she said, cardinals would not be giving interviews.

Father Thomas Reese of the National Catholic Reporter says this is a perfect example of a clash of cultures.

"The American cardinals are just more used to being open and talking to the press and answering questions in public," Reese says. "Rome just doesn't like to operate this way."

At the official briefing, Holy See spokesman Father Federico Lombardi was asked if the Vatican had put pressure on the American cardinals.

His reply, in translation: "This is a journey that is going on. The cardinals, as they get more into it, realize the importance of keeping things among themselves, out of respect for one another, the seriousness of their discussions, and perhaps came to the decision in that way. That is all we can say."

"We want to know and learn as much as we can relative to governance in the church, and the Curia is part of that issue, so certainly we want to discuss and learn what we can, and I think that will go on as long as the cardinals feel they need the information," DiNardo said.

And Cardinal Francis George dictated one of the key American requirements for papal candidates: a firm crackdown against sexual abuse by priests.

"Whoever is elected pope, he obviously has to accept the universal code of the church, which is zero tolerance for anyone who has ever abused a minor child," George said.

The Americans feel European cardinals — who have also had to deal with sex abuse scandals — have not learned the lesson from American mishandling.

Reese says this is a nonnegotiable issue.

"If we have a pope who, a week after his election, says, 'Oh, the sex abuse crisis, that's not important, a creation of the media,' that would be an absolute disaster for the American church," Reese says. "It would put us back 10 to 20 years."

Italian newspapers were suddenly filled with statements by cardinals from other parts of the world.

Jean Poupard of France called for a stronger role for laypeople and women in the church. His colleague Jean-Louis Tauran insisted that the cardinals have access to a secret report commissioned last year by Benedict XVI on the infamous Vatileaks scandal.

And German Cardinal Walter Kasper insisted that the next pope finally apply the principle of collegiality.

In an interview, he warned of the danger that the retired pope, Benedict, would try to influence future church governance.

Vatican spokesman Lombardi acknowledged that many cardinals are asking to be heard in the closed-door sessions. And there are reports that a number of outsiders are asking for the discussions to be prolonged into next week, pushing the start of the conclave further away.

Leaks exposed the strong resistance of the outsiders to the accelerated pace of the discussions favored by the Curia cardinals.

The focus is Curia intrigue and dysfunction.

And the gag order has had an immediate effect — some of the anonymous sources behind last year's Vatileaks have resurfaced.

One source told the Italian daily La Repubblica that the Vatileaks sources won't be intimidated, and that the struggle for transparency within the Vatican continues.

In fact, no Vatican watcher had ever believed that the tried and convicted papal butler had acted alone.