Accessibility links
Movie Review - 'The ABCs Of Death': A Violent Alphabet Soup Of Disappointment There are some worthy short horror films among the 26 vignettes that make up The ABCs of Death -- and some serious clunkers, too. 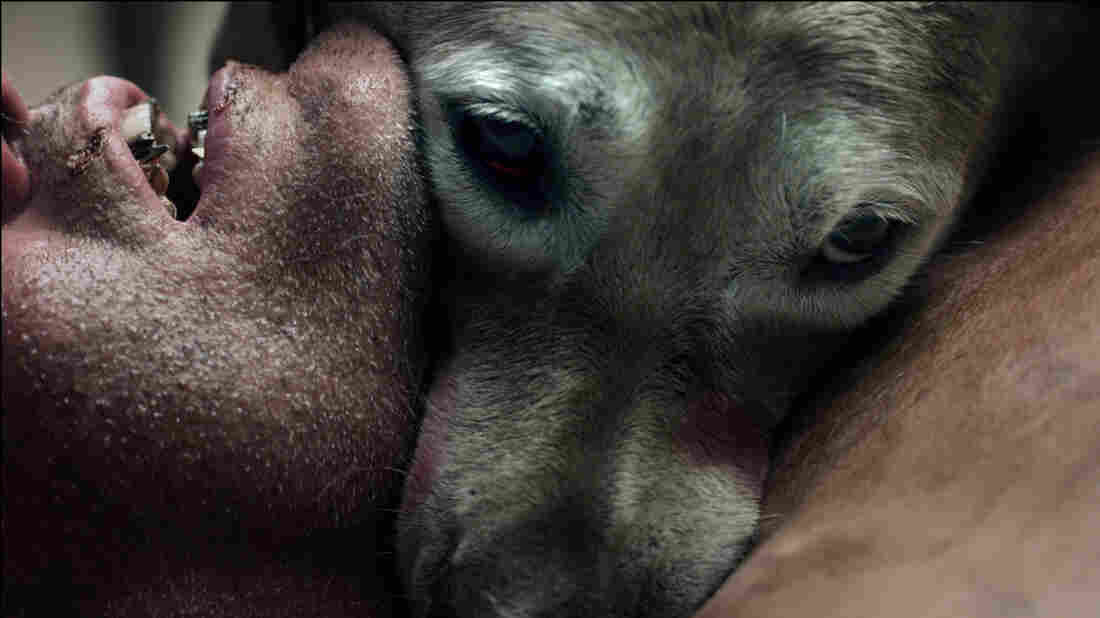 This still from the alphabetically themed horror anthology The ABCs Of Death is the only one publishable on a website that caters to a broad audience — which says a lot about the tone and content of the 26 short films included. Magnet Releasing hide caption

The ABCs Of Death

Despite a reputation for unevenness, anthology films still hold a certain appeal. There's the opportunity to see a few shorts — a form that tends to get bulldozed by feature films due to the economic realities of the industry. There's also the chance to see a number of directors all in once place, trying out something different; it's the cinematic equivalent of a rock 'n' roll supergroup.

If one film in an anthology is weak, it doesn't have to ruin the whole thing; a really good short or two can help to elevate the whole even with a few lackluster efforts in the mix. And so The ABCs of Death, a new collection of horror shorts assembled by producers Ant Timpson and Tim League, would seem to have a good chance at success: With 26 films, one for each letter of the alphabet, one might expect enough gems in the mix to make up for any stinkers. That's sadly not the case.

Timpson and League assembled an international crew of directors, assigned each a letter, instructed each to choose a word starting with that initial, and asked them to make a film about death associated with that word. In concept, it's Edward Gorey's Gashlycrumb Tinies for the big screen, with each director receiving a $5,000 budget and no other restrictions on how to carry out the task.

The list of directors is full of young filmmakers with impressive titles already in their brief filmographies: Names like Ti West, Nacho Vigalondo, Ben Wheatley, Jorge Michel Grau, and Adam Wingard should create anticipation for horror fans. And many of them deliver.

Grau's film, Ingrown, is one of the strongest, the final interior monologue of a kidnapped woman dedicated to the thousands of women like her abducted and murdered in Mexico over the past decade. It's thoughtful, haunting and tragic.

Wheatley also turns in an interesting effort with Unearthed, a short showing the death of a vampire from the vampire's point of view. The switched perspective is an unusual and effective way of creating sympathy for a monster.

With so little time to tell a story, however, most of the films necessarily hinge on a singular event or concept, or create a horror-infused joke to which the assigned keyword — which always displays after a fade to red at the end of each film — is the punch line. And while some of the directors are able to make that simplicity work for them, some ... not so much.

The overly talkative parrot in Banjong Pisanthanakun's Nuptials is a solidly executed bit of horror comedy. And even though it telegraphs its final gag a little too obviously, Marcel Sarmiento's highly stylized Dogfight works nicely as well. But Ti West's short depends far too much on the display of its title to work, and feels like a hastily assembled afternoon project.

Humor threads its way through many of these films, as there's a natural inclination in films this short — averaging less than five minutes each — to just tell a long joke or lead up to a wryly ironic twist. Adrian Garcia Bogliano's Bigfoot manages the horror-humor balance well, with a manufactured urban myth told to a scared little girl coming back to haunt the couple telling it. Adam Wingard and Simon Barrett's Quack, one of two shorts to include the filmmakers themselves, is a metafictional look at the creative process that manages to be genuinely funny.

Mostly, though, with so little time, the filmmakers either go for cheap gags — somehow, three of the movies literally end up in the toilet, and that doesn't even include Noboru Iguchi's uncomfortably wacko ode to Japanese schoolgirls and teachers' flatulence — or over-the-top horror shocks. The one entry from the New French Extremity school of horror, XXL, has an obvious and not unimportant message about unreasonable standards of beauty, but it submerges it in a pool of blood under a pile of torn flesh.

Perhaps inevitably, I started counting how many letters were left in the alphabet after the grisly end of Simon Rumley's Pressure. And while there were still a few good shorts to come, things started to get numbing and dull after that point. Only about a third of the shorts in this collection are the kind I'd go back to; another third are mediocre, and a final third are just plain awful. There are just too many stories to fit into two hours — and even with fewer weak links, The ABCs of Death might have fallen short all the same.