Accessibility links
Fresh Air Movie Review - 'Oz the Great and Powerful' There are three reasons to see this prequel to the classic 1939 film The Wizard of Oz: the trio of witches played by Mila Kunis, Rachel Weisz and Michelle Williams. But James Franco, who stars as the wizard-in-the-making, disappoints — and the film as a whole is a bit snoozy. 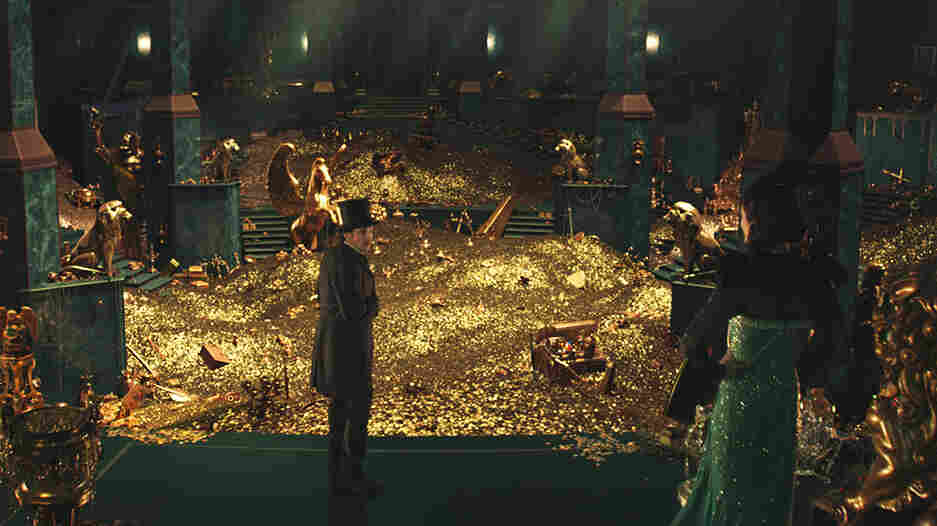 James Franco stars as the Wizard of Oz before the Wizard meets Dorothy in Oz the Great and Powerful. Walt Disney Pictures hide caption 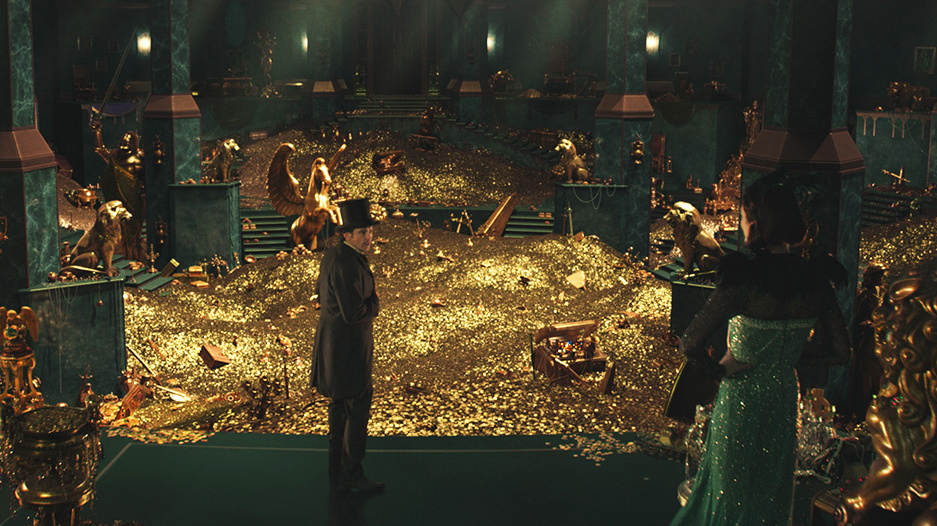 James Franco stars as the Wizard of Oz before the Wizard meets Dorothy in Oz the Great and Powerful.

Oz The Great And Powerful

'He Is The Wizard'

Watch A Clip From 'Oz The Great And Powerful' - 'How Hard Can It Be To Kill A Wicked Witch?'

'How Hard Can It Be To Kill A Wicked Witch?'

'I Wanna Go With You'

Oz the Great and Powerful. Say that name aloud and you will smile, I guarantee you: It will conjure up so many images, characters, actors, songs. Then hold that smile as long as you can, because you won't be doing much smiling at the movie called Oz the Great and Powerful, the so-called "prequel" to The Wizard of Oz from Disney Studios.

The filmmakers' notion is to go back before Dorothy and Toto and chart the journey from Kansas to Oz of the wonderful wizard himself — here called Oscar Diggs and played by James Franco as a traveling-carnival magician who uses his bag of tricks to get women into bed.

No, it's not author L. Frank Baum's wizard, but I for one think the idea for the character is inspired. He's the kind of flimflam artist Mark Twain might have come up with — and in fact did, in A Connecticut Yankee in King Arthur's Court.

The first sequence of Oz the Great and Powerful is a treat — not because it's that well-written, but because it's in black and white on a square screen and full of carnival bric-a-brac. Director Sam Raimi was an adolescent Super-8 filmmaker, and he obviously relishes Oscar's primitive sleight-of-hand and the turn-of-the-last-century wardrobe.

And it's an exhilarating moment when Oscar seduces one woman too many and jumps into the basket of a hot air balloon ahead of an enraged strongman. As he floats away, cackling and razzing his pursuers, we see that funnel cloud in the distance behind him, getting closer ... and closer ...

A short time later the screen widens and color seeps in, and we're in Oz — and then everything starts to get a wee bit snoozy. Oscar meets a lovely young woman named Theodora (Mila Kunis), who asks if he's the wizard foretold by legend who will free the kingdom of Oz from enslavement. He says he is, of course, which allows him to seduce Theodora — and, more to the point, to gain access to the kingdom's vast supplies of gold.

But to prove he's a wizard, he has to kill a certain wicked witch, along the way picking up a sidekick monkey that flies and talks in the voice of Zach Braff. I've seen few actors as unconvincing as James Franco when it comes to staring down and talking to a creature to be computer-generated later — and Franco doesn't just have to act opposite that insufferable monkey, but there's a sassy talking China Doll, too.

It's not that Franco is bad. He doesn't risk enough to be bad. My guess is that with all his stammers and shrugs opposite actors playing it straight, he's trying to be a cowardly hipster, like Bob Hope in the Road pictures — or Woody Allen, who actually cited Hope as an inspiration, in Sleeper.

Oz, The Great And Often Imitated

But Franco doesn't have the jokes. He's playing a noncommittal character in a noncommittal way, so that he sort of floats above the role. You want to yell, "This isn't a performance-art project! You're carrying a movie!"

Songs would have helped, but I'm guessing Disney didn't want to draw obvious comparisons to Victor Fleming's 1939 classic. The Oz books might now be in the public domain, but the Judy Garland musical isn't — which is why everything in Oz the Great and Powerful must be distinctly different, reportedly down to the shade of green of the Emerald City.

There are three reasons to see the picture — the trio of witches played by Mila Kunis, Rachel Weisz and Michelle Williams. Well, Kunis might be out of her depth in a role that requires her to go from impossibly naive to mythically vindictive. But Weisz's Evanora and Williams' Glinda are deliciously stylized. They share the best scene, in which Evanora gets a palpable charge out of torturing the beatific little good witch Glinda before the citizens of Oz. It's the first time the actors look like they're enjoying themselves — maybe because there's no sign of Oz the Small and Wimpy.