Was Japan's Hirohito Guilty? 'Emperor' Has No Clue

Was Japan's Hirohito Guilty? 'Emperor' Has No Clue 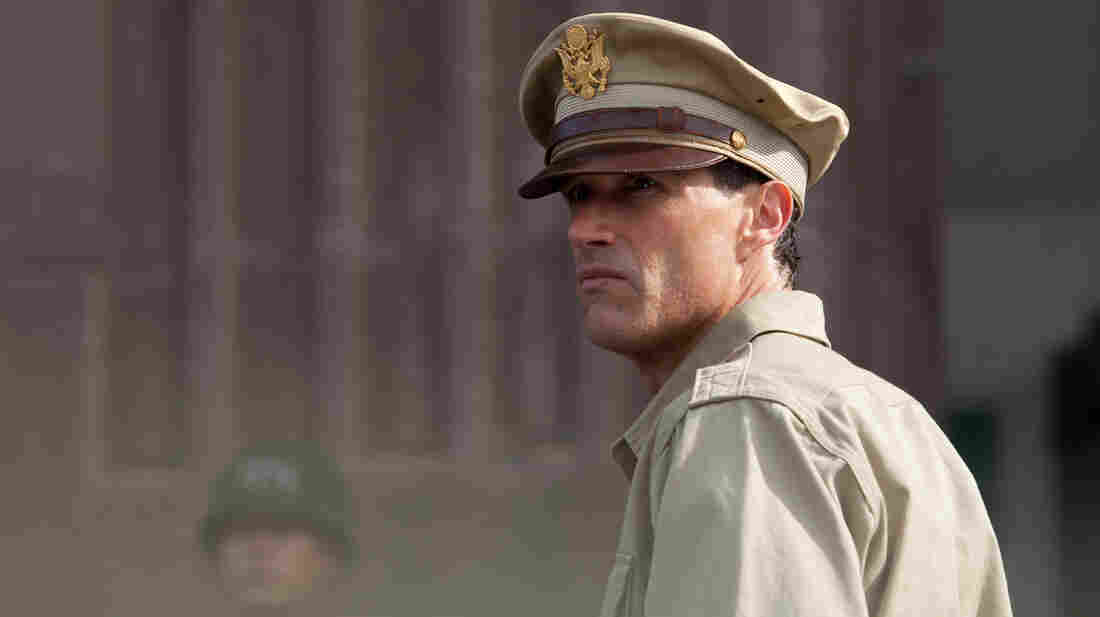 Gen. Bonner Fellers (Matthew Fox) is the cheerless, angsty romantic lead in a historical drama that could have leaned more toward accuracy in its depiction of post-war Japan. Kirsty Griffin/Roadside Attractions hide caption

Watch A Clip From 'Emperor' - 'The Conclusion Has To Be Ours'

'The Conclusion Has To Be Ours'

Watch A Clip From 'Emperor' - 'I Have No Concrete Evidence, Sir'

'I Have No Concrete Evidence, Sir'

You'd think that in telling a story whose novelty is in its veracity, retaining some semblance of that truth might be important. But wrestling history into narrative has its challenges, and things can get hazy when it comes to the facts in a historical drama. So it seems like the next logical step in telling a story with a relationship to truth might be that if you're going to fudge things, at least make it entertaining. Please, pull an Argo.

Emperor, a tame historical thriller focused on the early days of the U.S. occupation of Japan, takes a different tack, liberally changing details and laying out its tale with a baffling mediocrity.

On his arrival in Tokyo following Japan's surrender, Brig. Gen. Bonner Fellers (Matthew Fox) is tapped by Gen. Douglas MacArthur (Tommy Lee Jones) to arrest Japan's top leaders for prosecution of war crimes. When the emperor, whose palace grounds haven't been breached by U.S. troops, is taken off the protected list, Fellers is put in charge of investigating the monarch's role in the war and whether he should be prosecuted.

Emperor focuses on Fellers' inquiry into Hirohito — whether the emperor was a figurehead only, or whether he had the power to encourage or stop the militarist factions — and if he did possess direct influence, whether he was responsible for war crimes. Thematically, the film stakes out ambitious territory, exploring Americans' role as conquerors and rebuilders trying to balance the pragmatic needs of a country in ruin with the pursuit of justice and the question of whether such justice can be pursued dispassionately.

Despite the promising setup, the filmmakers' execution muddles what's inherently dramatic material. In clunky, as-read-from-a-history-textbook voice-over, Fellers explains the implications of prosecuting Hirohito; then the overwritten script makes him repeat that message early and often, and practically verbatim, to reluctant subordinates and Japanese officials who are well aware of the situation.

As a growling, strutting MacArthur, Tommy Lee Jones confidently occupies the shoes of a demanding man with the world at his feet, but he appears in a paltry few scenes, crowded out by a subplot about Fellers' search for his lost love Aya (Eriko Hatsune), a Japanese schoolteacher he met in college in America. The flashbacks to their relationship seem meant to add depth to the bland Fellers, but the romance is as generic as the Army's all-khaki uniforms — and Fox is barely suited to his character's impassioned monologues on justice, much less the qualities of a convincingly lovelorn lead.

Given that MacArthur only gives Fellers 10 days to determine the emperor's guilt, it's not as if the man is doing his best work, either: Nearly half his time and energy are spent looking for Aya, which leads of course to some long angry walks in the rain and fights in local bars where he doesn't belong. 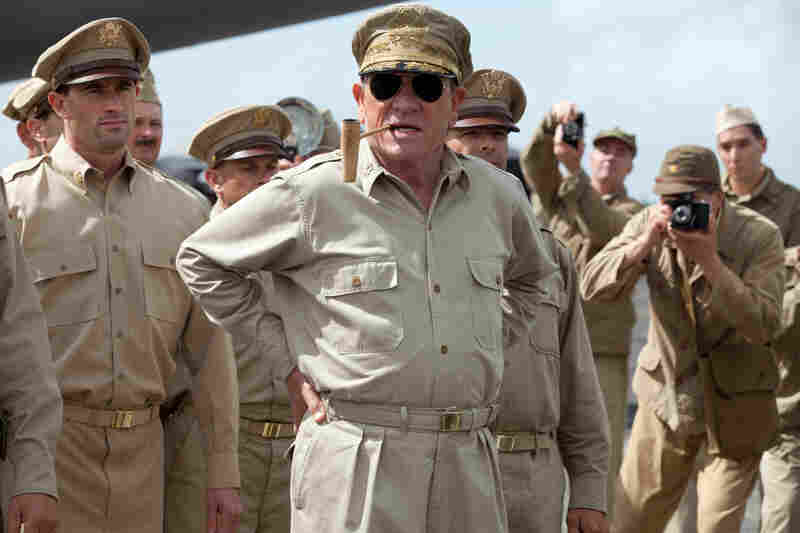 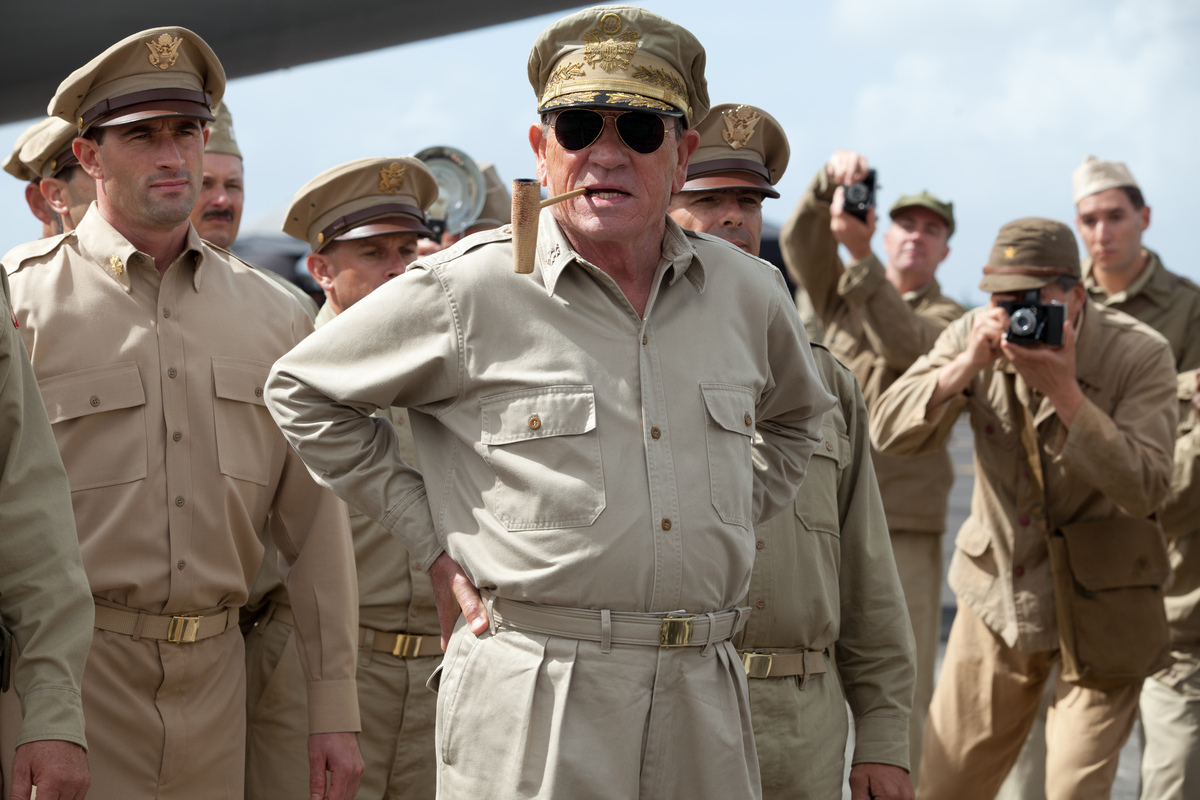 Gen. Douglas MacArthur (Tommy Lee Jones) may be the biggest military brass in Emperor, but he receives far less screen time than this larger-than-life persona deserves.

To his credit, director Peter Webber crisply captures the ravaged streets of postwar Tokyo and pushes the film's tone toward noir procedural: As Fellers enters an unfamiliar world, following leads and shaking down Japanese officials for information, tight close-ups show Fellers' weariness and betray the enormity of what he doesn't understand about his subject — and how uncertain he is about whether he's being manipulated. Yet the writing sabotages again as it glosses over details that might have made the process compelling, opting instead for more grandstanding from Fellers.

Worse still, most of the movie, in its broadest strokes, is invention. If it weren't, what's intended as a story of humanity rediscovered in the ruins of war would read very differently — as the story of how the United States put the life of Japan's emperor and the course of the country's rebuilding in the hands of a man whose memory of his Japanese college sweetheart clouded his judgment and sent him into a drunken tailspin.

The idea that an audience's experience of a movie is separate from that movie's relationship to history only holds up when the storytelling doesn't actively invite disbelief.

Aya? Fictional. Fellers was less of a romantic hero with a special affection for Japan than an expert in psychological warfare who designed MacArthur's strategy to demoralize Japanese troops.

The hasty review process? Made up. A timeline as short and arbitrary as 10 days is appealing as an effective ticking clock, but it's laughable as any kind of reasonable period for an investigation in which a people's future is potentially on the line. In truth, the review process took place over five months.

And although the film's Fellers appears to be struggling valiantly to find proof that will condemn or save the emperor despite political pressure to let Hirohito hang, the film obscures that the real Fellers' methods may have allowed Japanese leaders time to coordinate their stories and ensure the emperor's exoneration.

These artistic liberties don't heighten the drama; they dull it. Emperor sanitizes and simplifies the complicated and interesting ideas at the heart of its story, and while the film's greater disservice is to the unmentioned truth, the facts that so survive seem merely the stuff of Hollywood. The real-life coup attempted by soldiers on the eve of Japan's surrender receives only a passing mention, and when the film finally portrays the first meeting between MacArthur and Hirohito, it's a glimpse into something unmistakably authentic. A better, truer story could have been told.