Accessibility links
Thousands Flee Northern Syria After Latest Airstrikes Syrian rebels have captured a provincial capital, Raqqa, in the north of the country. The Syrian government has responded with airstrikes, which has set off an exodus of refugees heading to the Turkish border. 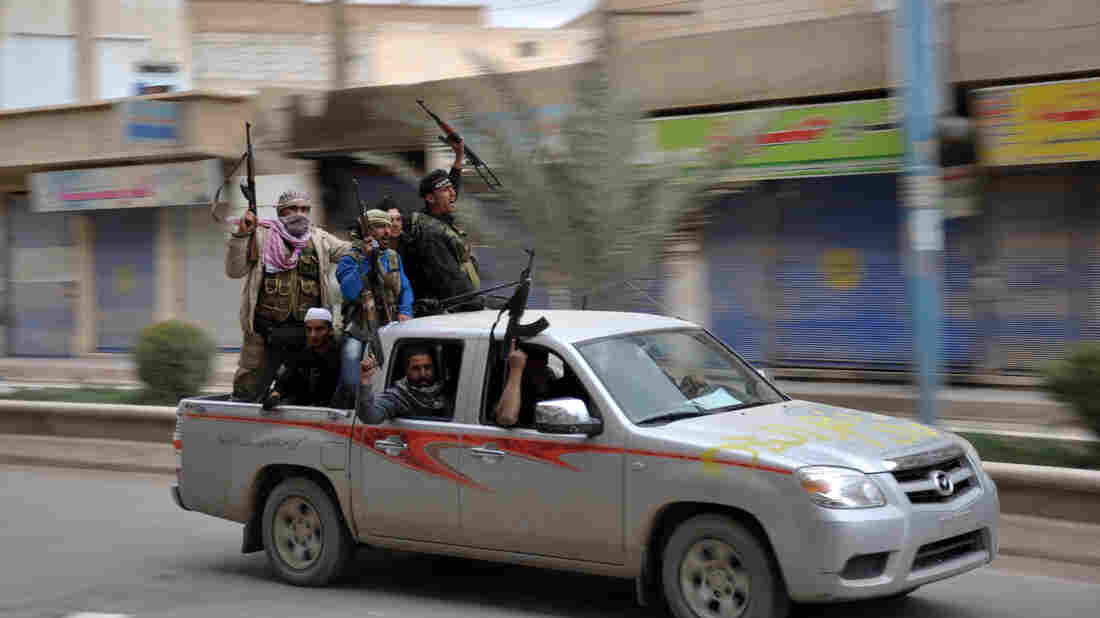 Syrian rebels celebrate in a street in the northeastern Syrian city of Raqqah after capturing the provincial capital on March 4. The government has responded with air strikes, creating a new wave of refugees. Mohammad Al-Hussein /AFP/Getty Images hide caption 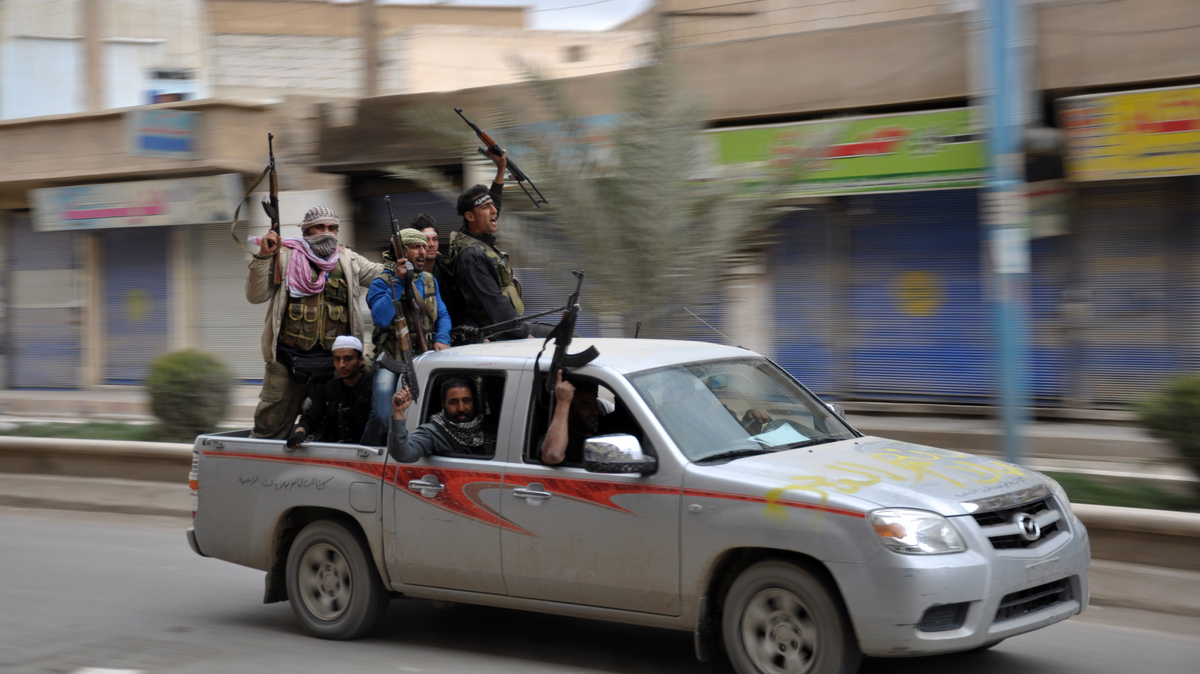 Syrian rebels celebrate in a street in the northeastern Syrian city of Raqqah after capturing the provincial capital on March 4. The government has responded with air strikes, creating a new wave of refugees.

A new flood of Syrian refugees is streaming into southern Turkey after the Syrian air force bombed the city of Raqqa, a provincial capital that the government lost control of earlier this week.

The Syrian rebels overran Raqqa, capturing several high-ranking prisoners, including the provincial governor. Many residents supported the rebels, but when the airstrikes began, they packed in a hurry and fled, believing it was safer to make a dash for the border than stay at home.

The shells started crashing into residential neighborhoods Tuesday, says Rima, the only name she gave. She was standing at the border gate with Turkey waiting for her father to get across from the Syrian side.

"Raqqa is so bad, so bad. Everything is bombing. It's a disaster," she said.

When a shell landed this week in an apartment nearby, killing a neighbor, the family decided it was time to go. They grabbed their most important belongings, leaving everything else behind.

Rima was with her sister, whose eyes were red from crying. Raqqa had been a safe place, where many displaced Syrians had come for shelter — tripling the population. But now Rima and her family are displaced, too, and had no idea where they would sleep on this night.

People at the border turned to watch a cloud of smoke rising in the distance: another airstrike, at least 25 so far, according to activists in Raqqa.

Abdul Karim Ayteh arrived here in a van with 18 family members. Some of his neighbors didn't make it.

"So many people want to come here, but they can't because there's no car, no [gasoline], and some of them don't have a passport," he said.

For months, the army had stayed out of the provincial capital, in bases around Raqqa. But about a month ago, the regime militia known as the shabiha arrived in Raqqa, setting up checkpoints, arresting activists and stealing the food aid that humanitarian workers delivered to the displaced.

Anwar al-Hajwan, a pharmacist and aid worker, says he witnessed the widespread theft.

He says President Bashar Assad's regime is finished in Raqqah and that the soldiers didn't put up a fight. He brought his family out of Syria but says he's going back to help civilians who still need a way out.

Jeff White, a military analyst at the Washington Institute for Near East Studies, says government soldiers are still hunkered down in scattered bases. But the army appears stretched too thin to regain control of Raqqah. As rebels consolidate their hold on the city, it's a milestone in the almost two-year revolt to overthrow the government.

"Taking a provincial capital is symbolic," White says. "Piece by piece, province by province, the rebels are going to break the country away from regime control."

The cost is too high for a college student who says her name is Benan. Just a week ago, she was inviting Facebook friends to join her in a city she thought was not part of the conflict. But late Wednesday night, she threw on a coat and headed for the border, still in her pajamas.

"The bombing was beside my grandfather's house," she said.