Accessibility links
Displaced Syrians Bring Life To Ancient 'Dead Cities' Millions of Syrians who have fled their homes are finding refuge in unimaginable places. In the northern province of Idlib, displaced Syrians have found shelter in ancient archaeological ruins that until recently were frozen in time. In some cases, the living share space with the dead. 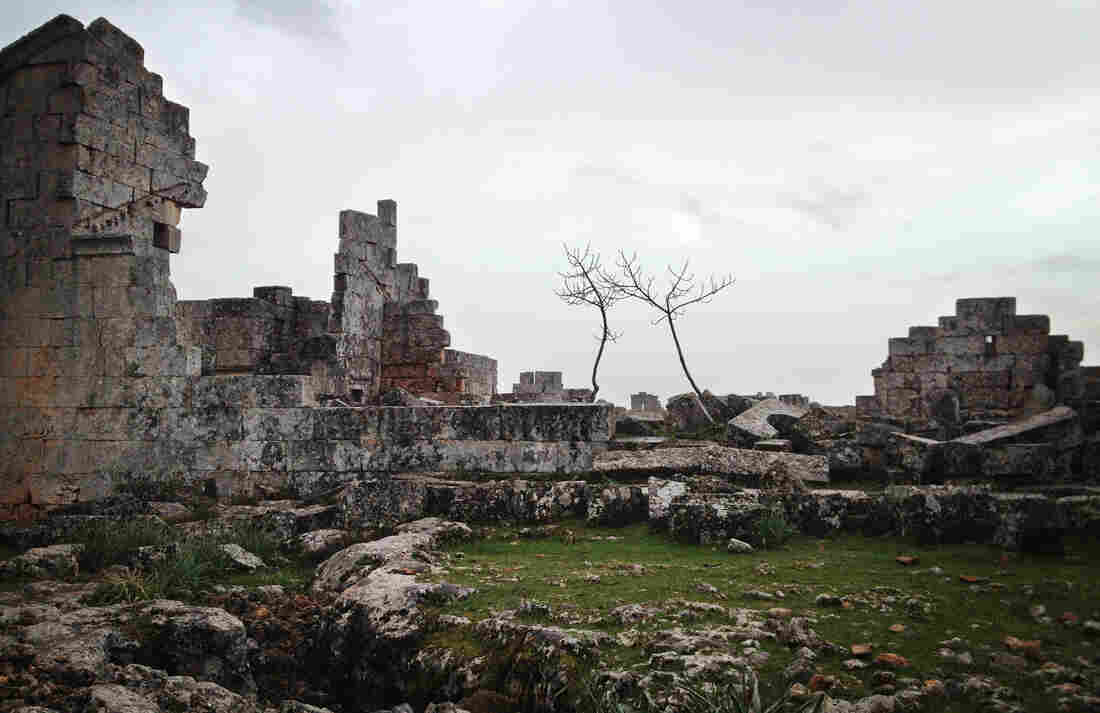 The Syrian "Dead City" of Shanshrah, in northern Idlib province. A U.N. World Heritage site, the Dead Cities of northern Syria date back to the first to fifth centuries. Kelly McEvers/NPR hide caption 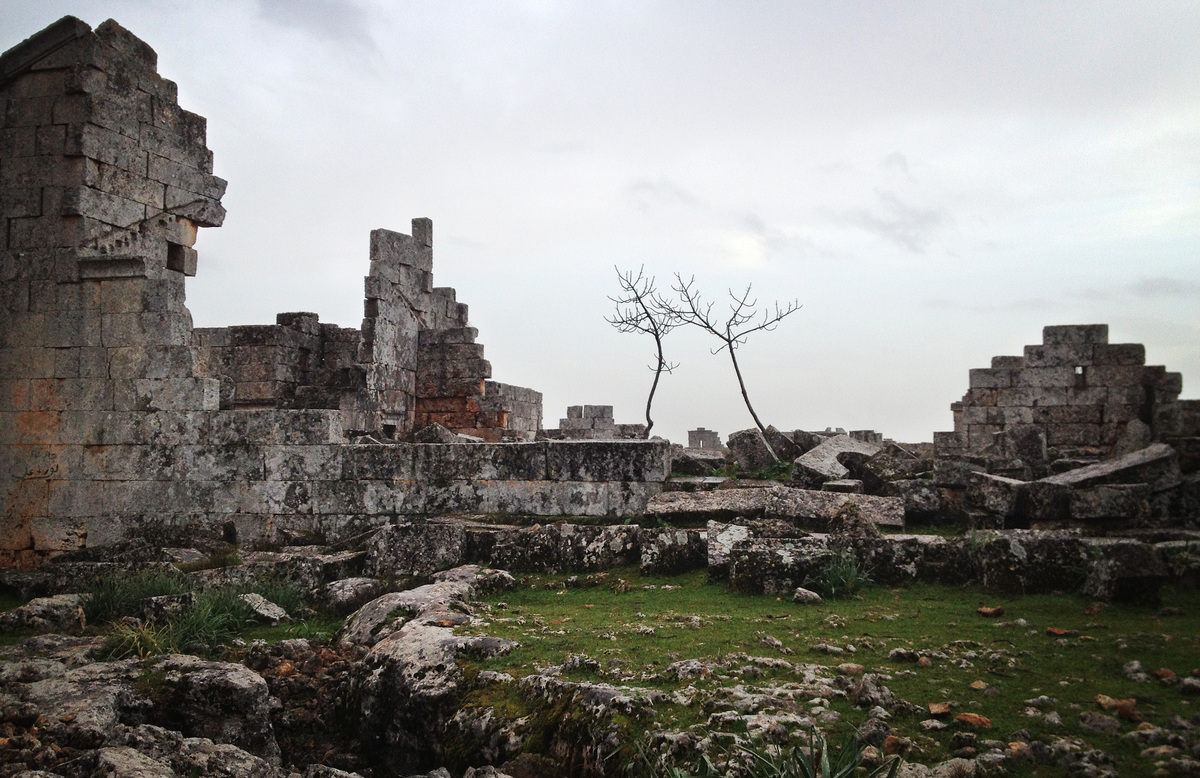 The Syrian "Dead City" of Shanshrah, in northern Idlib province. A U.N. World Heritage site, the Dead Cities of northern Syria date back to the first to fifth centuries.

Parts of the northern Syrian province of Idlib are a U.N. World Heritage site, known for its ancient archaeological wonders. Walking along muddy, rocky ground covered in new grass and wild daffodils, we start to see remnants of Roman structures — the columns and doorways of dwellings, temples and churches that date back to the 1st century.

They're known as the Dead Cities, and they trace the transition from ancient pagan Rome to Christian Byzantium. Until recently, they were deserted, frozen in time.

But no longer: smokestacks dot the landscape, evidence of people living underground.

A recent survey by Syrian and international aid workers says there are millions of displaced Syrians inside the country.

In Idlib, villages are now completely empty, and people who fled them are seeking refuge in unimaginable places.

Safety Among The Dead

One such family, which has found refuge underground amid the ruins, invites us downstairs. We walk down through an ornate Roman doorway, and into a dark, man-made room. We had been told these people were living in caves. But it's clear this is something else.

The head of the household is a young father named Abu Khalid. He, his pregnant wife and his little boy escaped the village of Kafrnbouda at night, when the government shelling grew intense. Abu Khalid found his family shelter in a nearby city. The next day he went back; their house had been destroyed. 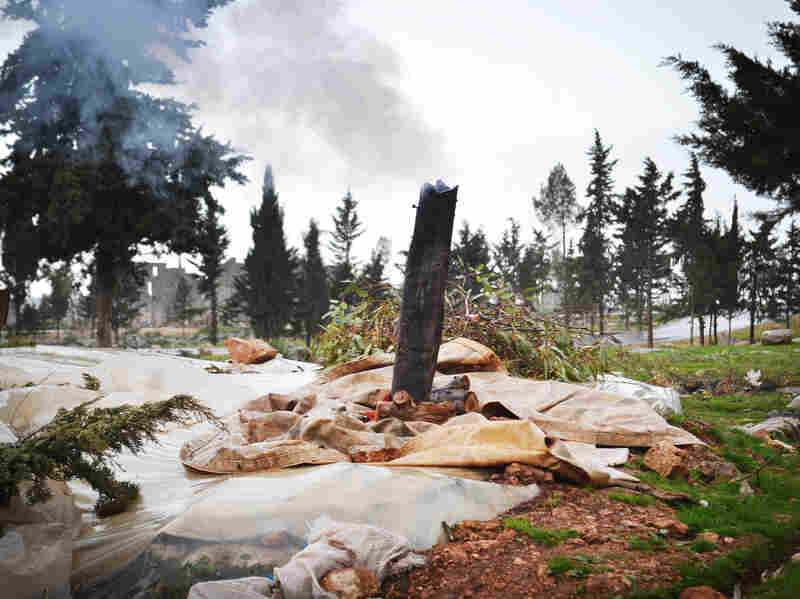 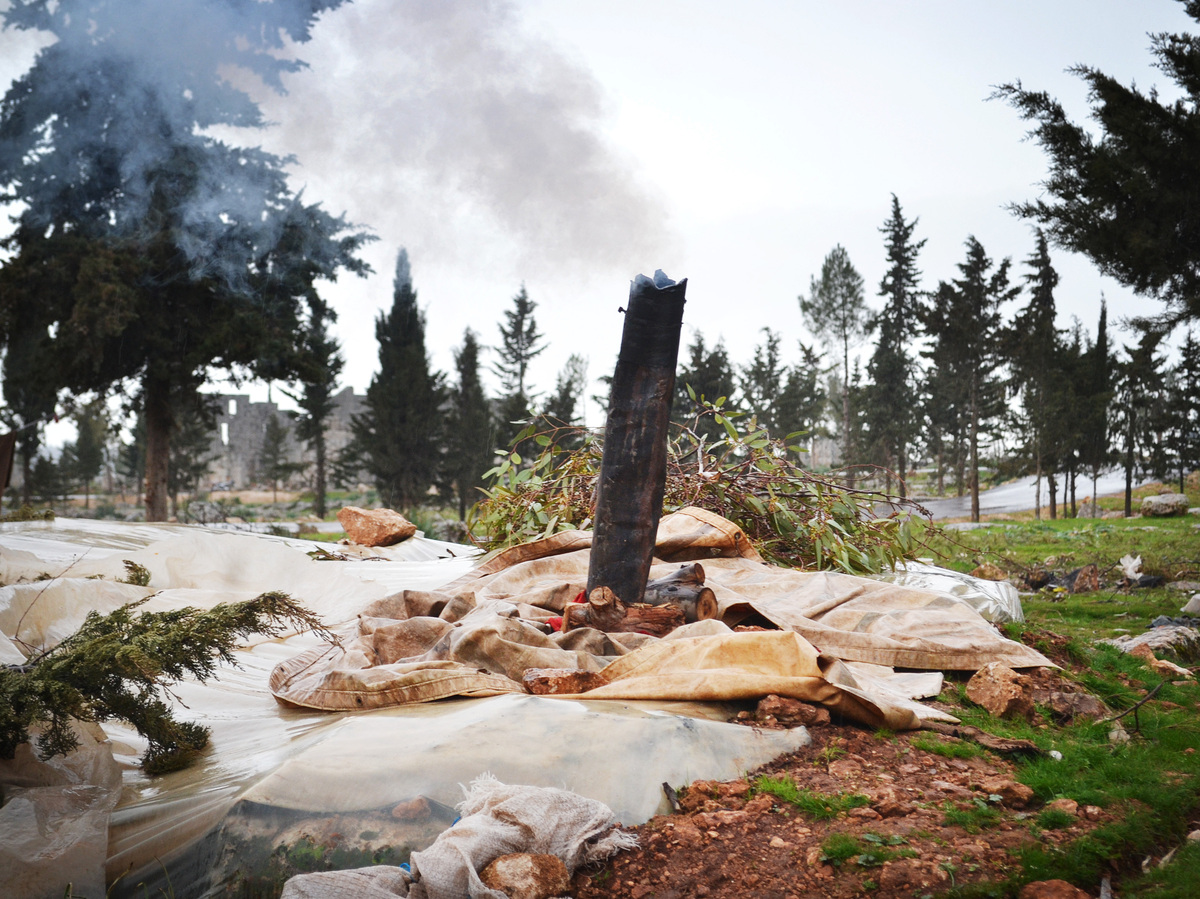 Smokestacks mark the underground dwellings of Syrians fleeing fighting in their hometowns.

They fled to another city, but that city got shelled, too. Abu Khalid moved his family just outside the ancient city.

"We were just running away from shelling," he says. "We would be staying here in the forest, among the trees, on the hills. And then we found this — this cave."

Abu Khalid calls it a cave, but it's really a grave — an ancient burial site. He says digging old earth and sand out of the grave and living underground was the only way to keep his family safe from the shelling and the rockets.

We ask him if he found any remains.

He says yes, an entire skeleton.

Abu Khalid says as a Muslim, it's not right to desecrate a grave, so he buried the bones again in the bed-shaped area where we're sitting. We ask him if it's strange to sleep next to such a place.

Abu Khalid says some 40 families now live in graves across this ancient city. When we hear rockets landing nearby, we understand why.

Abu Khalid and his family have been given a few blankets by local residents, but international humanitarian aid has not made it this far into Syria.

Looting Arrives Along With Refugees

Emma Cunliffe, a researcher at Durham University in Britain, was monitoring the destruction to Syria's vast archaeological and historical heritage even before the uprising began in 2011.

Now she really has her work cut out for her. She says it's hard to see any site destroyed or looted, but the Dead Cities are a particular treasure.

That's because after being built up for centuries, they were abandoned fairly quickly, likely because war cut off lucrative trade routes.

"What was left was very, very well-preserved," she says. "The buildings are still there, up to the second story. So it's actually like walking through this really beautiful ghost town."

Cunliffe says not only are people now using these ghost towns as a place to live, but also as a way to make a living.

Back in the Dead City, we see this up close. We meet a man and his son who show us some stones that look like they've recently been unearthed. They say the diggers have been here. They usually come at night.

The man says two days before, "some people" came and broke open the remains of a church, dug up mosaics, and sold them.

Cunliffe says there are well-established networks for selling such artifacts in the region, especially after the looting of art during the Iraq war. She says one Syrian Bronze Age artifact that was thought to be looted recently sold for $400,000.

The only way to stop such trade is to go after the people who buy the artifacts, she says, and to help the people who are desperate enough to dig them up and sell them.