Accessibility links
A Big Battle Over A Tiny Isle In The Nile The 70-acre patch of agricultural land is prime real estate next to Cairo, and it has been the subject of a long fight over ownership. 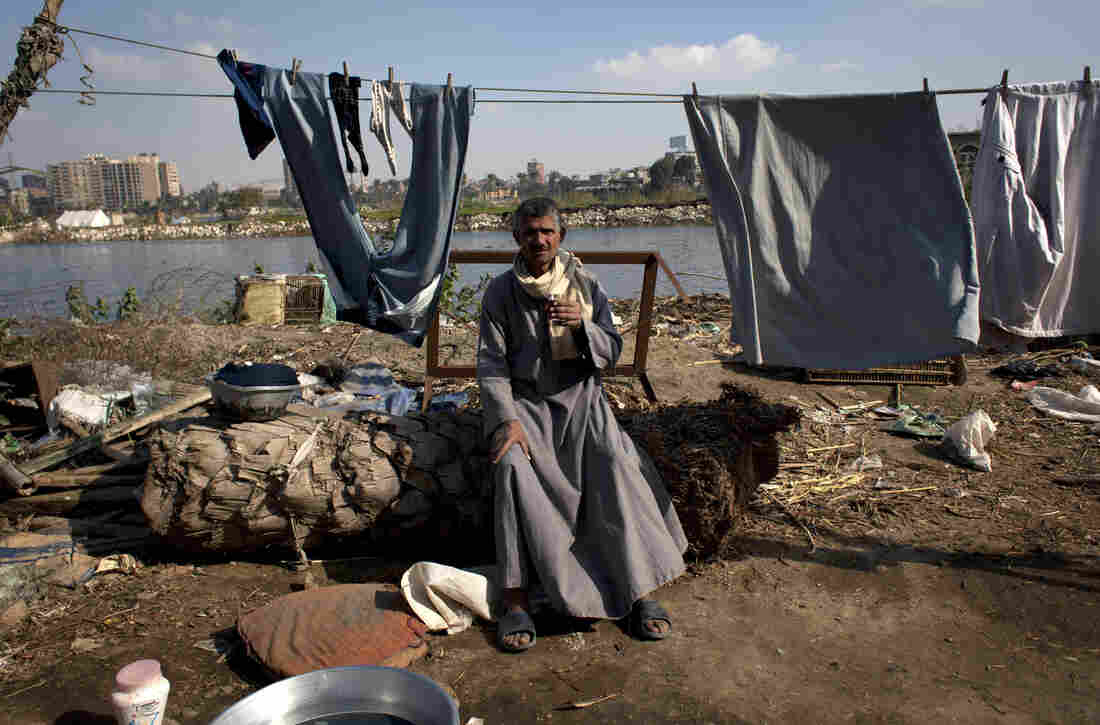 An Egyptian farmer drinks tea near his home on Qursaya island, in the Nile River, next to Cairo, in January. The Egyptian military says it is the registered owner of the island's land, a claim disputed by the farmers and fishermen who live there. Nasser Nasser/AP hide caption 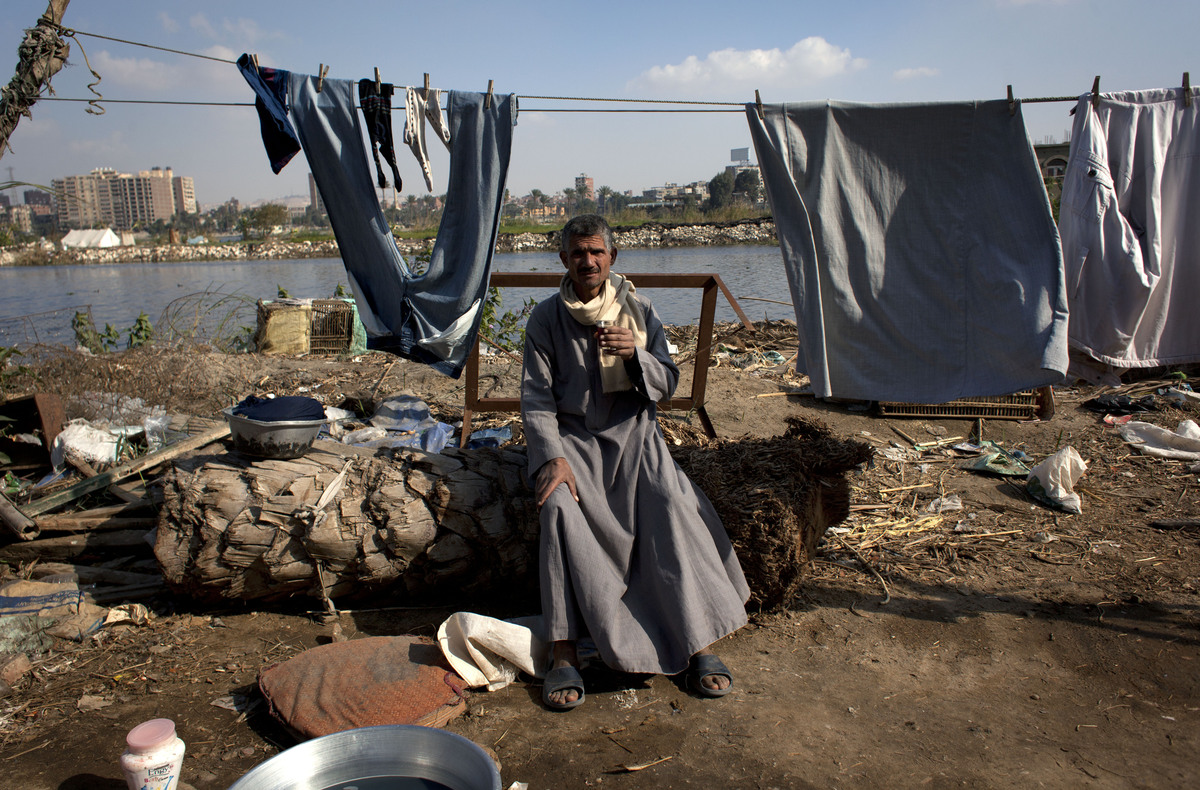 An Egyptian farmer drinks tea near his home on Qursaya island, in the Nile River, next to Cairo, in January. The Egyptian military says it is the registered owner of the island's land, a claim disputed by the farmers and fishermen who live there.

It's not easy to get to Qursaya island, a tiny bit of land in the middle of the Nile River in Cairo, Egypt's capital. You have to take a boat from the riverbank. There are no cars on the island, and it's only had running water for a few years.

It's a quiet 70-acre patch of agricultural land amid a megacity, where mooing cows provide the soundtrack, and farmers and fishermen have lived for generations.

But not all is as bucolic as it seems: The island is at the heart of a yearslong legal battle between those farmers and the government.

"Countryside in the middle of the city — and that's why I came here and I decide to live here," says Mohammed Abla, a prominent artist who moved to Qursaya in 1997. "And I think the first years were very quiet but the problems [started in] 2000." 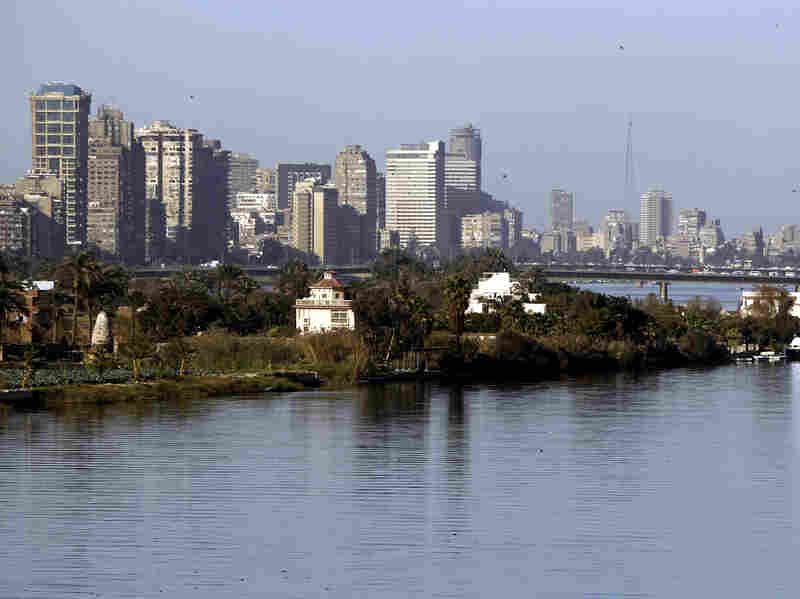 The 70 acres of Qursaya island are largely agricultural. Residents are now fighting the government, which has sold the land to an investor for a tourism project. Amr Abdallah Dalsh /Reuters /Landov hide caption

Before 2000, Abla says, the government neglected the island. But it is prime real estate, and the problems began when the government told residents that it sold the land to an investor for a tourism project, Abla says.

Ever since then, the islanders have been struggling with the government, the military and investors over who gets to keep Qursaya.

The issue of land ownership is murky, but the residents won a major court case in 2010.

"I think this was a good decision by the administrative court because it made a very clear ruling that the people of the island of Qursaya have the right to live there and they have the right to work there," says Heba Morayef, a director at Human Rights Watch who has been monitoring the situation.

Despite that ruling, the Egyptian army claims it owns several large strips of land on the island. Some of the residents repossessed that land last year because it was sitting empty.

But before dawn one morning last November, military police landed on Qursaya and seized the areas after clashing with residents.

"I was here in the house and woke up at dawn. I heard the sound of fighting – heavy fighting. I found the army everywhere, preventing anyone from coming through. And they set fire to our huts down on the river, our crops. They burned everything," he says.

A fisherman was killed and several soldiers and residents were injured in the violence. Mahmoud says his father was arrested that day, along with 24 others.

Sameh Seif al-Yazal, a retired army general, says the island is government land and the army needs portions of it for security reasons.

"So it has a strategic area, and that's why it is inside the plan — the military plan of the army to defend Cairo for instance, or the convoy in the Nile," Yazal says.

But Morayef, the human rights activist, believes the military's interest in the island is more basic than that.

Three months after the clashes, island residents gathered outside a Cairo military court to hear the verdict. The court decided to release 24 of the 25 men but it did not resolve the basic dispute.

Farmer Magdy Youssef's brother was found innocent of assaulting army officers. He says these months have been difficult for his family and he hopes the matter is over.

Morayef says this case brings up many of the major tensions between the military and civilians in Egypt.

"It highlights this issue of land owned by the military, and the fact that they are very keen to protect their economic interests which obviously involve a lot of real estate. It also involves an excessive use of force by the military," she says.

Egypt's constitution allows the army to try civilians in military courts without oversight. Morayef is worried that incidents like the fight over Qursaya will continue to happen whenever the military's economic interests are threatened.