Accessibility links
Venezuelan Oil Subsidies Still Buoy Neighbors, For Now Late President Hugo Chavez helped out ideological peers in Latin America, as well as key U.S. allies in the Caribbean. But with Venezuela's own financial challenges and an upcoming presidential election, many of those countries are worried their vital oil lifeline is about to be shut off. 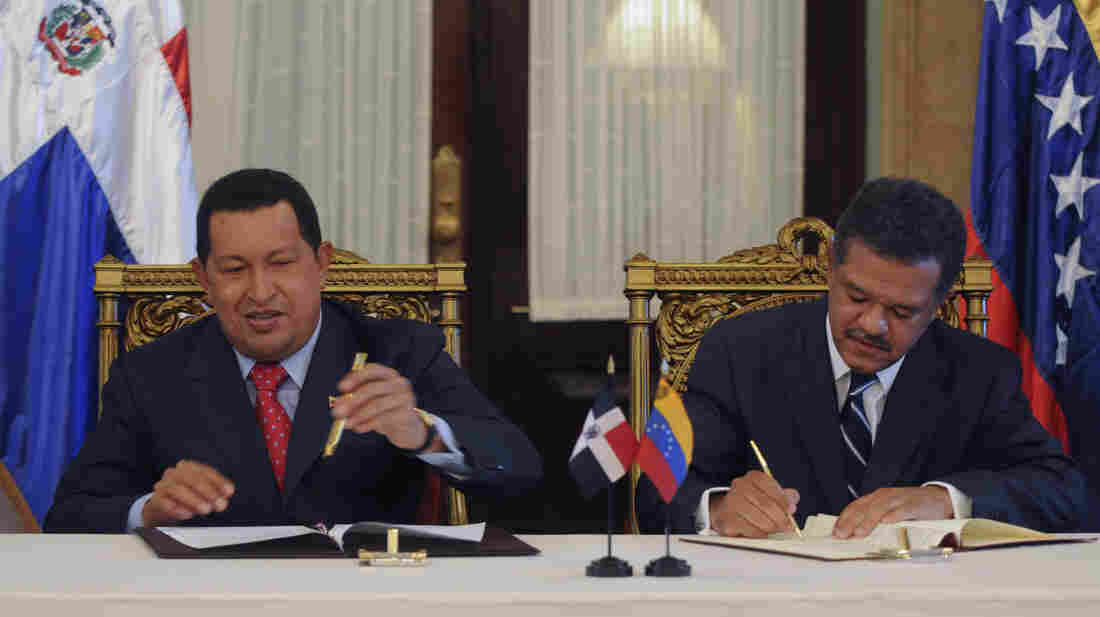 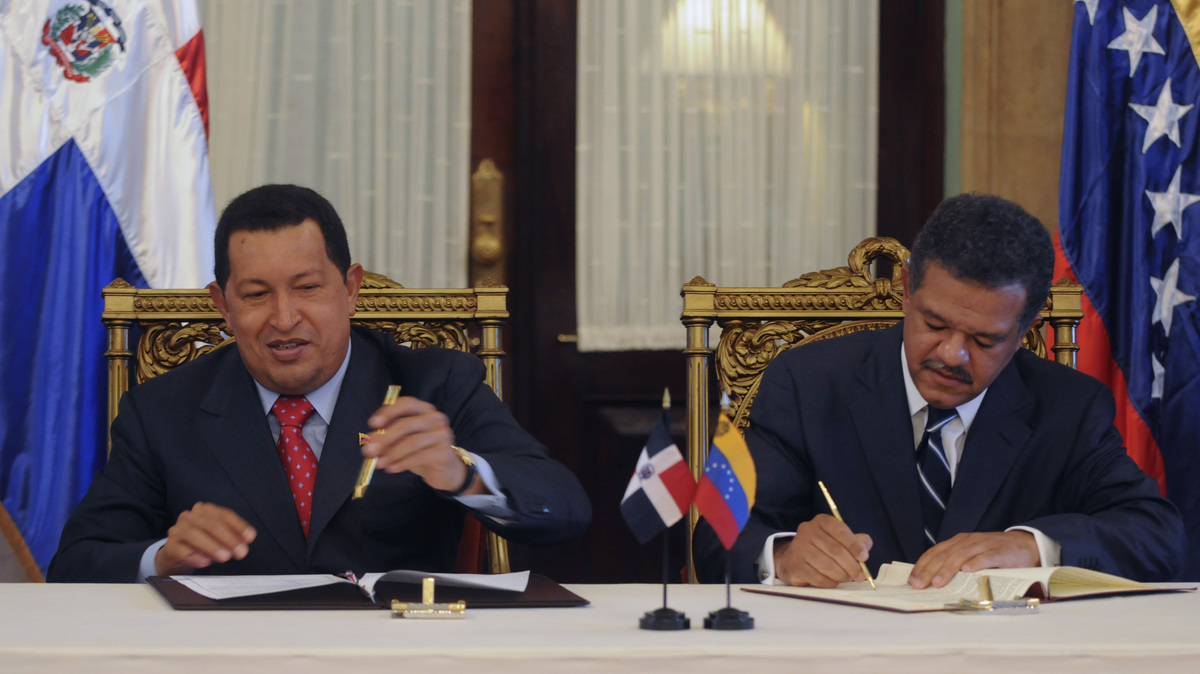 Venezuela's late president, Hugo Chavez, was a tremendous supporter of Latin American countries, especially those sympathetic to his socialist ideals.

The country's vast oil reserves are a key source of economic aid, but the Chavez didn't just help out his ideological peers like Cuba and Nicaragua. He was also a great benefactor to key U.S. allies in the Caribbean — many of whom now worry whether their vital oil lifeline is about to be shut off. 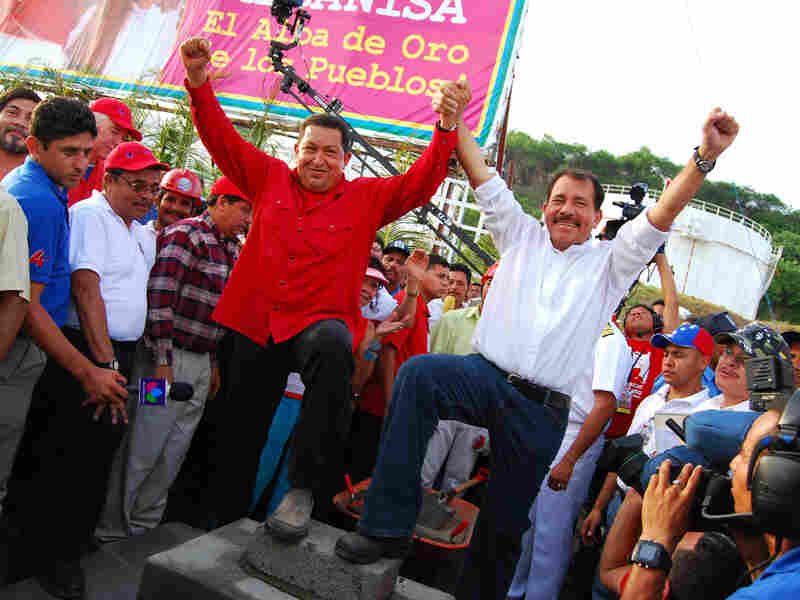 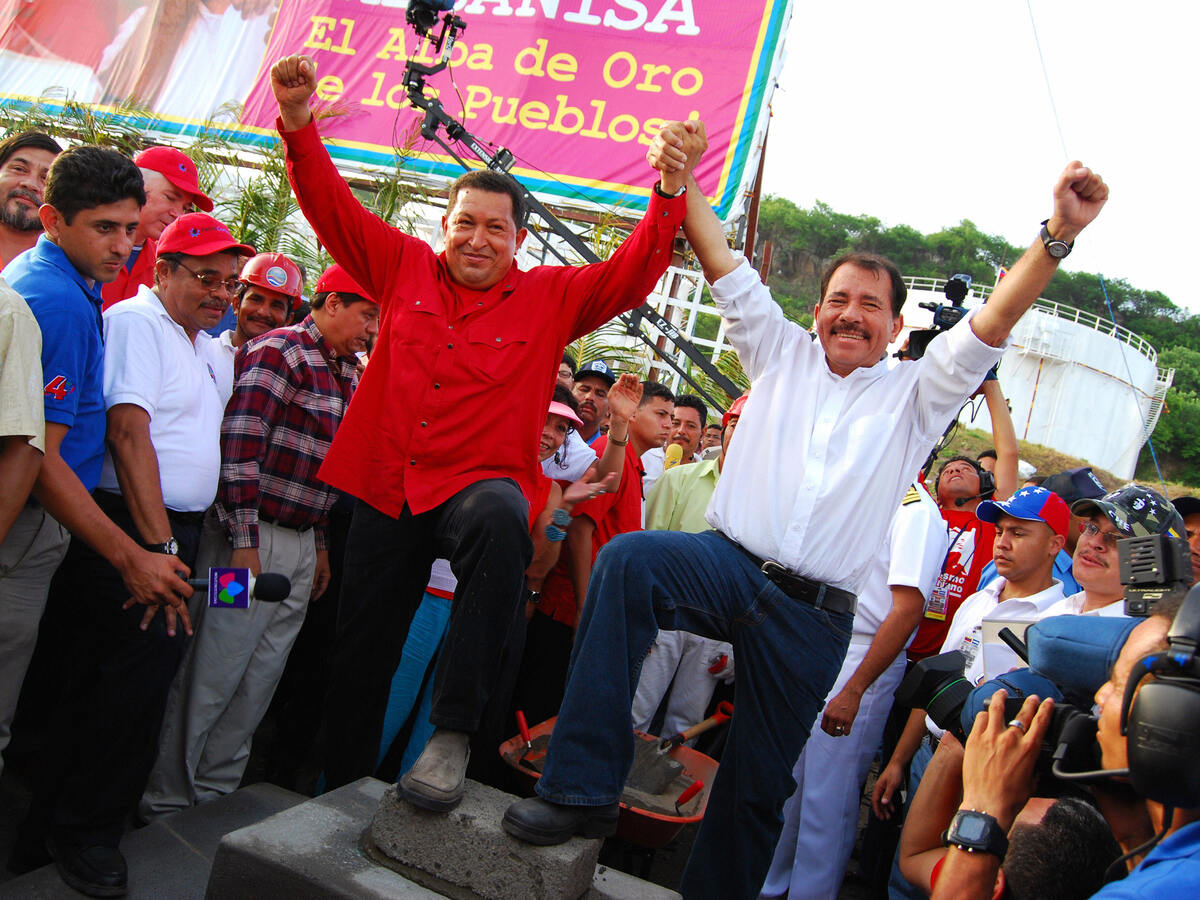 Chavez celebrates a new oil refinery with Nicaraguan President Daniel Ortega in 2007. Nicaragua repays Venezuela for its oil with sugar, coffee and other goods.

Through Venezuela's Petrocaribe program, Chavez provided critical oil exports to more than a dozen countries in Central America and the Caribbean.

The Dominican Republic gets about 40,000 barrels a day. Thanks to Chavez, the island nation pays for as little as 5 percent of the shipment — the rest is paid over 25 years at an annual interest rate of 1 percent.

Salvador Rivas heads the Non-Conventional Energy Department at the Dominican Republic's Commerce and Industry Ministry. He says there is great affection for Chavez for all that he has done for the country and for his longtime solidarity.

That solidarity amounts to about $3 billion a year in Venezuelan oil. The cheap terms also include paying for the petroleum in local currency, or even with beans and sugar.

Nicaragua has a similar deal. It also pays with sugar, coffee and even jeans from the country's fledgling textile industry. Venezuela erased Haiti's oil debt after that country's devastating 2010 earthquake and provides Jamaica with enough cheap oil to generate nearly 95 percent of the island's electricity.

"These countries have gained enormously. It's hard to imagine how they could have lived without the aid from Venezuela," American University's Philip Brenner says.

Brenner, an international relations professor, says this is especially true during the 14 years that Chavez was in power. Oil went from $10 a barrel to more than $100.

After Chávez: His 'Revolution' Is Likely To Continue

He says Chavez's subsidies provided incredible savings that allowed these countries to invest more at home, keep inflation low, and ride out the worldwide recession.

"Latin Americans weathered this financial crisis actually quite well because they had begun diversifying themselves away from dependency on the United States," Brenner says. "So their trade now is greater within the region than it is with the United States."

But how long can Venezuela keep up the generous oil aid? The country is enduring food shortages, high inflation and a recent 30-percent devaluation of the national currency.

New presidential elections are scheduled in Venezuela in April. If the current vice president — a close Chavez ally — is elected, most believe the aid will continue.

Miguel Tinker Salas, a Latin American professor at Pomona College and expert on Venezuelan oil, says even if the opposition wins, that doesn't necessarily mean an end to the aid.

"The opposition is very keen on saying that this money should be invested in Venezuela, this is the money that should be going to hospitals, etc. The reality is that it really represents a drop in the bucket," he says.

Salas says the subsidies are only about 1 percent of GDP. That's good news for Rivas, the energy engineer in the Dominican Republic. He says he believes the oil agreements will be honored. After all, Rivas says, they were signed by Venezuela's democratically elected government.

But just in case, he says, the Dominican Republic will tap into natural gas reserves and invest in renewable and alternative energy sources.