Accessibility links
Once On Death Row, He Now Fights To Defeat The Death Penalty Kirk Bloodsworth was the first person in the U.S. to be exonerated by DNA evidence after receiving the death sentence. Convicted in Maryland, Bloodsworth is now one of the strongest advocates of abolishing the death penalty in the state. 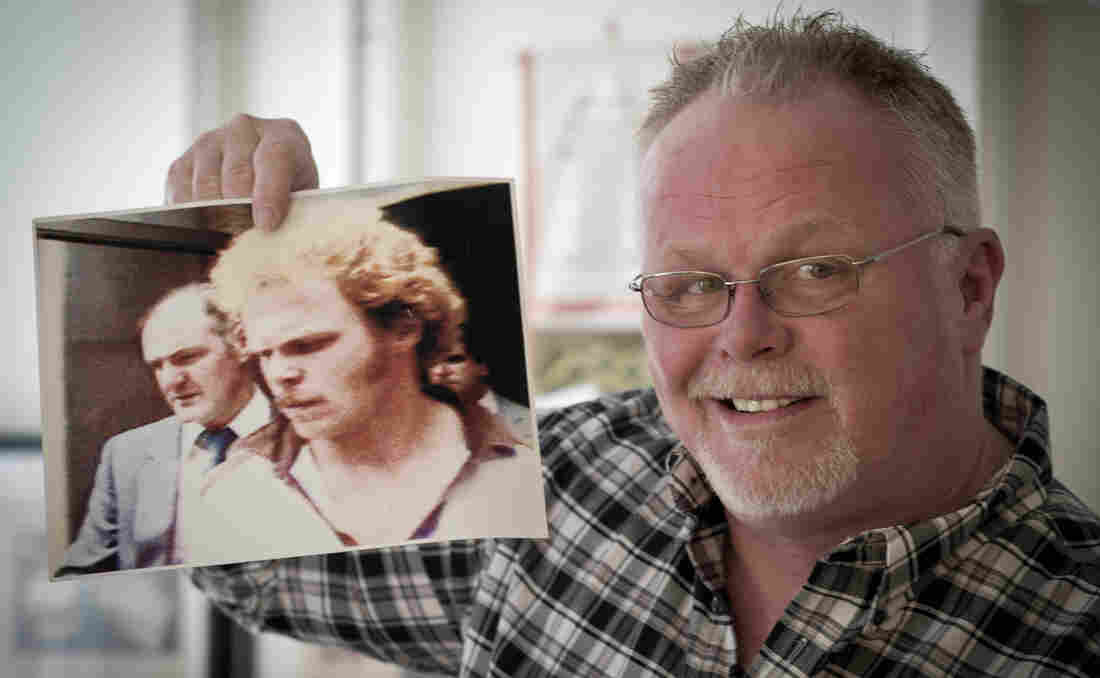 Kirk Bloodsworth was the first person in the U.S. to be exonerated by DNA evidence after receiving the death sentence. Convicted in 1985 of the rape and murder of a young girl, he was released in 1993. Mladen Antonov/AFP/Getty Images hide caption

Maryland is about to become the 18th state to abolish the death penalty.

A bill has passed the state Senate and is expected to pass the House of Delegates easily with the governor's ardent support. The strongest advocate to end the death penalty in Maryland is Kirk Bloodsworth, who was convicted of murder in that state in 1985 and was the first person in the U.S. to be sentenced to death row then exonerated by DNA evidence.

When you meet Bloodsworth, he comes across as the kind of guy you might want to go for a beer with. He's large and amiable, and comes across as a regular guy — maybe a crab fisherman, something it turns out he loves to do.

'What Do You Do With Your Life?'

Bloodsworth says he, like most exonerees, has suffered from various forms of mental illness. His catharsis, he says, has been public speaking, so he has traveled far and wide to tell his story. 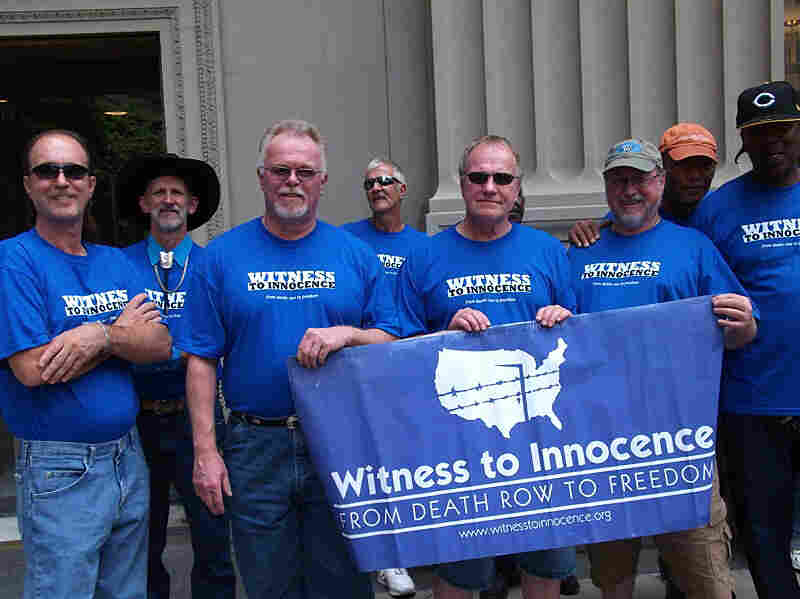 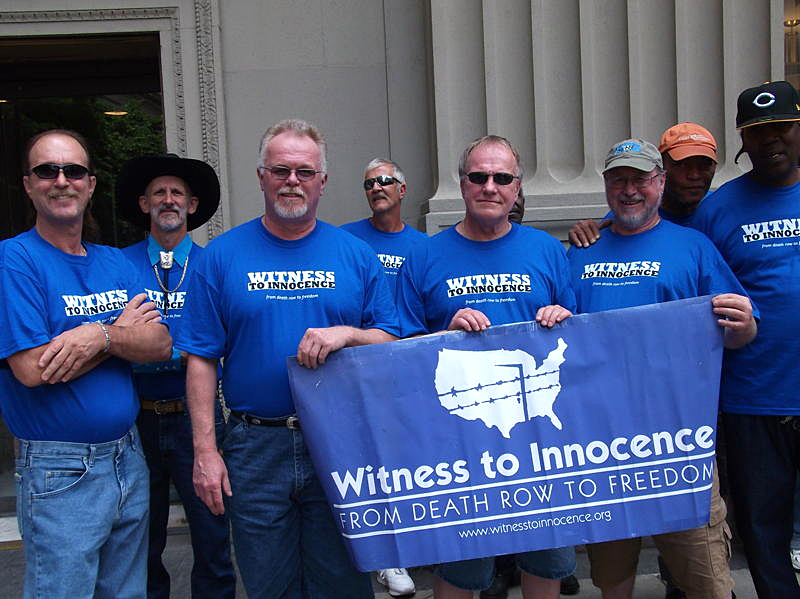 Courtesy of Witness to Innocence

He was convicted of the brutal rape and murder of a young girl. When he tells his story, the audience sits riveted.

"The gavel came down on my life," he tells a group of law students at Temple University, "and the sentence was death. The courtroom erupted in applause. 'Give him the gas and kill his ass.' They partied until two o'clock in the morning to my execution. Except there was one problem. I was an innocent man."

Bloodsworth says speaking in public is better than forking out hundreds of dollars an hour for a psychiatrist. His story has become well known. He was misidentified by a neighbor who saw a sketch of the suspect on TV. And then almost a decade later, DNA evidence exonerated him, evidence that was hidden away in a closet and found almost by accident.

Bloodsworth was given $300,000 by Maryland upon his release. Most exonerees are not so lucky, says David Love, the executive director of Witness to Innocence, a group dedicated to abolishing the death penalty. He says people assume you're free and life is good and problem-free. But many exonerees get no money or services.

"Many people who are exonerated face PTSD," Love says, "because what they experienced in prison was in fact a form of torture: solitary confinement — in some cases 23 hours a day, not able to have physical contact with people. Going through that for years and years, you can't help but have a permanent damage as a result."

He ticks off alcoholism, drug abuse, homelessness. Bloodsworth says he still can't escape the stigma. As he told the Temple University law students, let's say you go on a date and the girl asks,"Where have you been for the last nine years?"

"What do you say to that?" Bloodsworth says. "'Oh, I was in prison. They said I killed someone, and it was a brutal crime, but I didn't do it, and I have DNA evidence, can you pass me the salt? It's really tough.' "

Bloodsworth was 22 when he was convicted. He came out of prison when he was 31. But his life had stopped when he went in and all his friends had gone to college, were married, had kids. "I didn't even know how to balance a checkbook," he says.

Fighting To Abolish The Death Penalty

Witness to Innocence is 10 years old. Its offices are in Philadelphia. Membership is limited to death row exonerees. There are 142 exonorees in the U.S., and about 50 of them have joined the group. Bloodsworth became its advocacy director a little more than three months ago.

The organization provides a support network for exonerated death row survivors and their family members. The group helps with social service issues and has annual gatherings where its members can exchange stories and talk about the issues affecting their lives. Witness to Innocence is also pushing for federal compensation for those exonerated from death row. One of their main missions is working for the repeal of the death penalty. In Maryland, Bloodsworth has been front and center of this battle.

When Gov. Martin O'Malley testified for repeal before a Maryland Senate panel in February, he and other opponents gave familiar moral arguments that the death penalty is inconsistent with the principles that define American character.

"The numbers suggest that the death penalty is not a deterrent, and it does not work," O'Malley said.

Bloodsworth gives a very different kind of argument. Human beings are not perfect, he says.

"The prosecutor in my case was very smart. The judges in both trials were very smart," he said. The homicide detectives were smart and the jurors were concerned citizens, he argued. "But in the end, every single person involved in the State of Maryland v. Kirk Noble Bloodsworth was dead wrong," he testified.

A system run by human beings cannot be foolproof, Bloodsworth says, and even the most well-intentioned can make mistakes. And a mistake is an unjustified death.