Accessibility links
When Rand Paul Ended Filibuster, He Left Drones On National Stage The senator launched a nationwide conversation when he challenged the president's pick to lead the CIA. He vowed to keep talking until the White House clarified whether it has authority to kill U.S. citizens on American soil with drones. He finally stood down, but the debate is far from over. 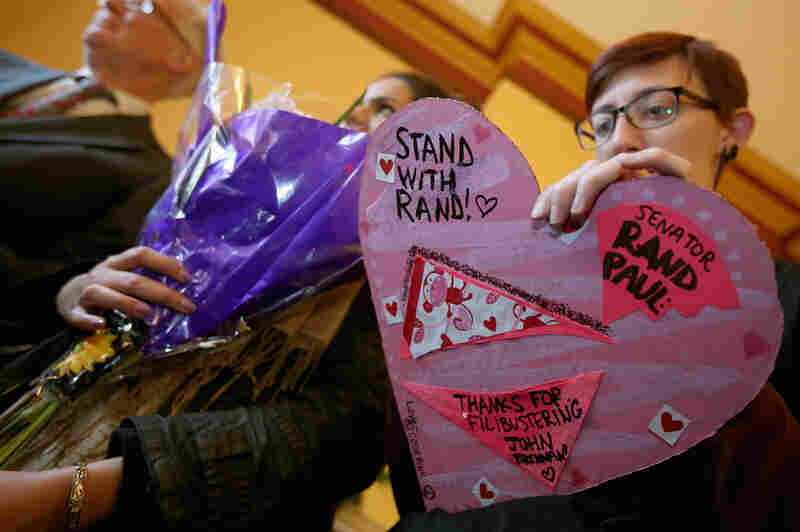 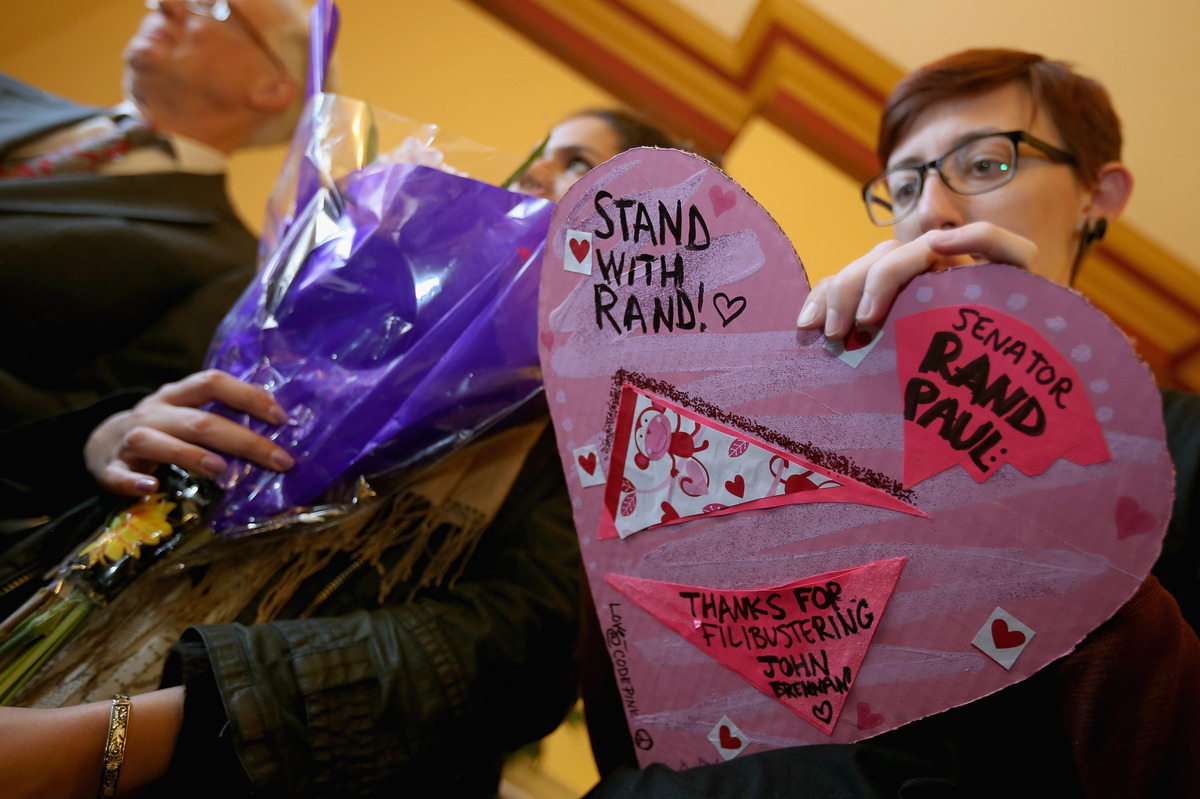 Republican Sen. Rand Paul of Kentucky launched a nationwide conversation last week with his 13-hour filibuster of the president's nominee to lead the CIA.

Paul vowed to keep talking until the White House clarified whether it has authority to kill U.S. citizens on American soil with drones.

Administration lawyers said in all but the most extreme cases, the answer is no. Paul finally stood down, but the debate over drones is far from over.

Paul says a letter from the Obama administration is what set him off on the epic talking spree.

"When the president responds that, I haven't killed any Americans yet at home and that I don't intend to do so, but I might, it's incredibly alarming, and really goes against his oath of office," Paul said.

"I think the Obama administration has been quite clear it would never ever use that authority except in an extreme emergency situation, the likes of which are not that hard to figure out," Vladeck says.

Rand Paul Talks His Way Into The Political Big Time

They would be emergencies like another Sept. 11, when terrorists hijacked a plane full of civilians and the Bush White House ordered the plane shot down anyway. Or Pearl Harbor, where enemy fliers are dropping bombs on U.S. military installations.

Republican Sen. John McCain of Arizona famously has no quarter with Fonda. She visited North Vietnam while McCain was a prisoner of war there. But McCain says the U.S. is in a different kind of war now.

Imagine You're In A Cafe...

Republican Sen. Ted Cruz of Texas, who read tweets calling on Americans to #StandbyRand during the filibuster, posed this hypothetical to Attorney General Eric Holder at a hearing this week:

"If an individual is sitting quietly at a cafe in the United States, in your legal judgment, does the Constitution allow a U.S. citizen on U.S. soil to be killed by a drone?" Cruz asked Holder.

"For sitting in a cafe and having a cup of coffee?" Holder asked. 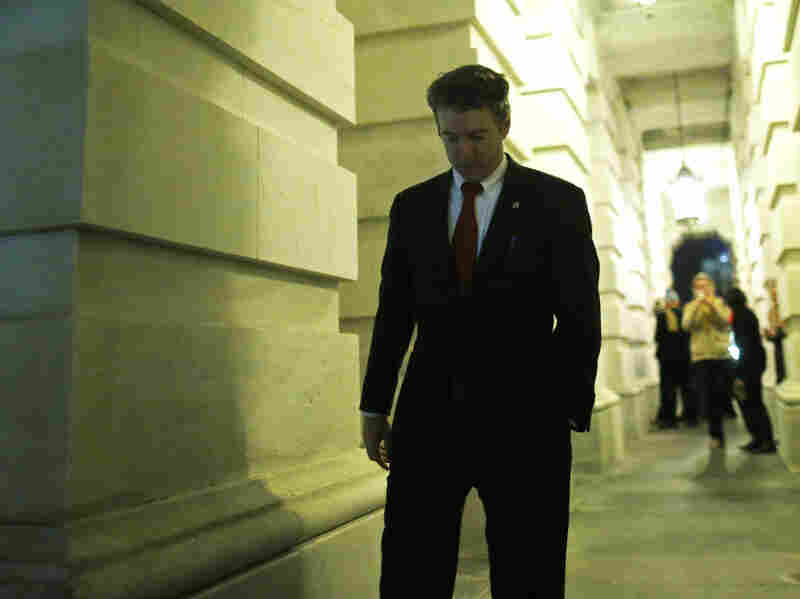 Sen. Rand Paul, R-Ky., walks out of the Capitol after his filibuster of the nomination of John Brennan to be CIA director on Capitol Hill early Thursday. Charles Dharapak/AP hide caption 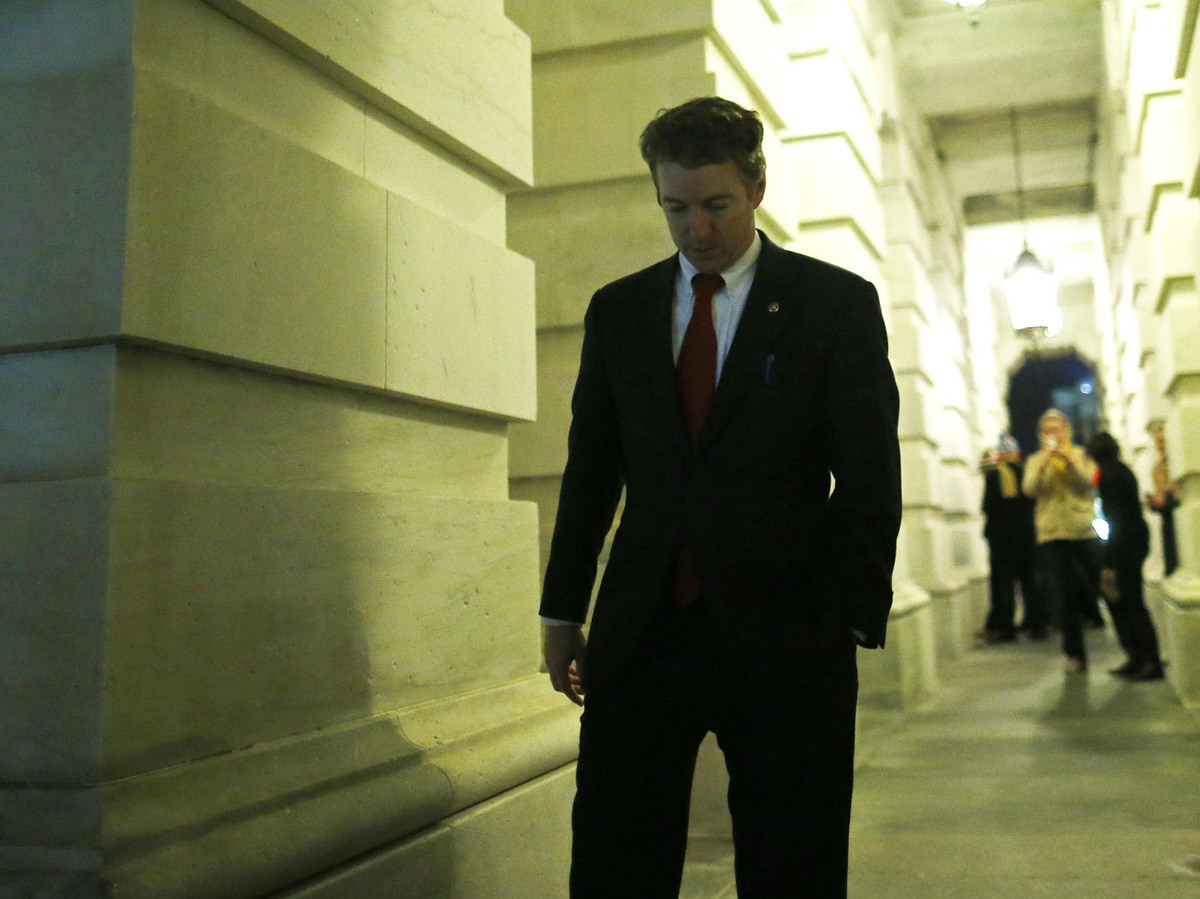 Sen. Rand Paul, R-Ky., walks out of the Capitol after his filibuster of the nomination of John Brennan to be CIA director on Capitol Hill early Thursday.

"If that individual is not posing an imminent and immediate threat of death or bodily harm, does the Constitution allow a drone to kill that individual?" Cruz replied.

"On the basis of what you said, I don't think you can arrest that person," Holder said.

Holder went on to say that in Yemen and Afghanistan, it can be difficult for the U.S. military to capture enemy combatants — not a factor for most people drinking coffee on American soil.

Democrats and Republicans on Capitol Hill have united on one issue, though: The failure of the Obama administration to release secret legal memos that explain when the U.S. government can carry out drone attacks overseas.

Vermont Democrat Sen. Patrick Leahy — chairman of the Senate Judiciary Committee — said he voted against the president's choice to lead the CIA for that reason.

And Sen. Richard Durbin, a Democrat from Illinois, says he'll hold a hearing in early April to explore the legal authority for drone strikes and what protections exist for American citizens on White House target lists.