Accessibility links
Owens Valley Salty As Los Angeles Water Battle Flows Into Court Almost 100 years ago, a water-supply diversion from Owens River helped quench Los Angeles' thirst some 200 miles away. L.A. thrived, but it drained the Owens Lake and created a salt flat that now pollutes the air. A century later, the finger-pointing continues, and this week, the city's water department is back in court over its cleanup plan. 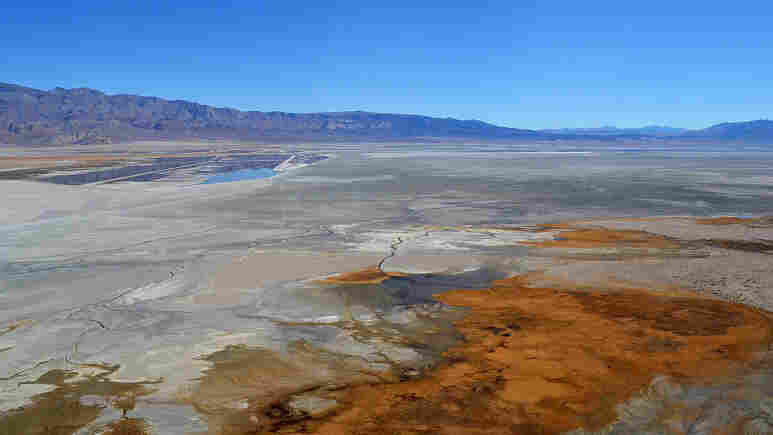 Owens Lake — which dried up after losing its water source, the Owens River, to Los Angeles — is known to be a source of air pollution. The city of L.A. is in court over obligations to control dust pollution at the lake. Kirk Siegler /NPR hide caption 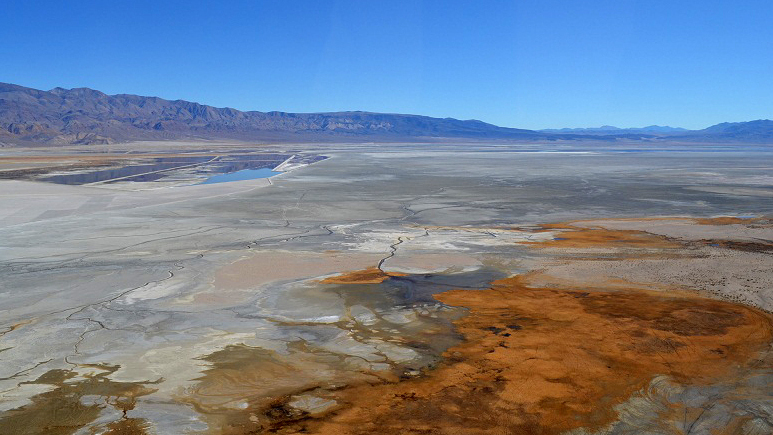 Owens Lake — which dried up after losing its water source, the Owens River, to Los Angeles — is known to be a source of air pollution. The city of L.A. is in court over obligations to control dust pollution at the lake.

In the West, fights over water last a long time.

It's been almost 100 years since William Mulholland stood atop an aqueduct along the Owens River and said, "There it is, take it." He was referring to a diversion channel that started piping water to Los Angeles from 200 miles away. That water allowed L.A. to become the metropolis it is today.

But it also meant that the Owens River no longer flowed into the massive Owens Lake, which quickly dried up and became one of the biggest environmental disasters in the nation.

Now, Los Angeles is back in court over its obligations to control dust pollution at Owens Lake.

At the end of a bumpy road skirting the barren edge of the dry Owens Lake bed, highway signs become teachers about this harsh environment: that way to Furnace Creek, straight ahead to Stove Pipe Road, then Death Valley beyond. The wind has left small sand dunes on the road. Even in winter, the high desert sun is punishing, but you can see for miles.

And it's not hard to spot the white speck of Marty Adams' helicopter coming into view on the southern horizon. Owens Lake is four hours away from L.A., unless you have a chopper — then the journey takes about an hour and a half. Friendly, polished Adams is given an aerial tour of Owens Lake, near the Sierra Nevada Mountains, hundreds of times.

As director of water operations for the Los Angeles Department of Water and Power, Adams oversees the complex system that collects snowmelt off the Sierra Nevada and carries it to water taps in the country's second largest city. But he's also in charge of dealing with the environmental consequences, and they're huge.

"People hear a 'dry lake,' and you might think it's a mountain lake, it's surrounded by trees," Adams says.

Instead, it's a salt flat the size of San Francisco, and when the wind blows, it can churn up huge dust storms with high levels of particulates that are dangerous to breathe. That earned Owens Lake the dubious mark of being the largest single source of dust pollution in the nation. And California law leaves no ambiguity for who the responsible polluter is.

In the late 1990s, the city of L.A. reached a historic deal and agreed to a cleanup plan. To date, the city has spent more than a billion dollars doing that, giving it another distinction: It's one of the largest dust-control projects in U.S. history.

"And it's really trying to control dust in a desert that's naturally dusty," Adams says.

Those dust-control measures are easier to see once the chopper ascends higher. There are a few places where bulldozers have laid gravel. But it's mostly just giant, shallow pools of water that are still the weapons of choice to fight dust. And each day, the city pumps enough of it back onto the dry lake to fill the Rose Bowl. So Adams' agency has gone to federal court to make the case that they're done here.

"We believe that we've done everything that we've committed to do," he says. "At this point, we believe the job's done," Adams says.

But not so fast, say California air quality regulators. Air Pollution Control District Director Ted Schade is in charge of monitoring air pollution in the area. He says the city is almost done with the cleanup, 90 percent of the plan has been met, and 45 square miles are controlled — so why stop now?

"The reason the city is not deploying the additional controls that are required to meet the standard is simply about money," Schade says.

When Schade took the job in 1990, the levels of particulate coming off Owens Lake were 100 times the standard the federal government says is safe to breathe. These tiny particulates are especially harmful because they're hard to detect, and can build up in the lungs over time and cause respiratory problems. Schade says things have gotten a lot better around the dry lake bed, but they're still not in the best shape.

The Owens Valley was a dusty place even before L.A.'s water diversions began. It's also a vast, sparsely populated place. But people here still have to live with the dust, and some still complain of allergies and other respiratory problems when the storms blow in and choke the valley. 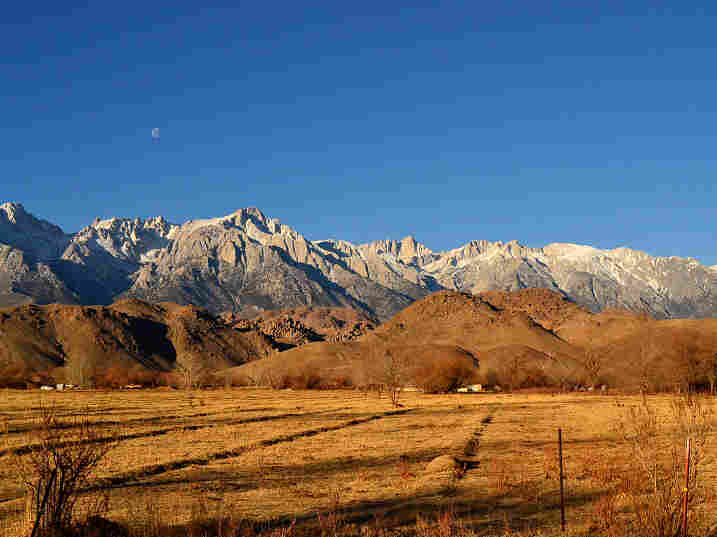 Owens Valley and the Sierra Nevada, the high desert environment that is drier today because of a century worth of water diversions to Los Angeles, some 200 miles away. Kirk Siegler /NPR hide caption 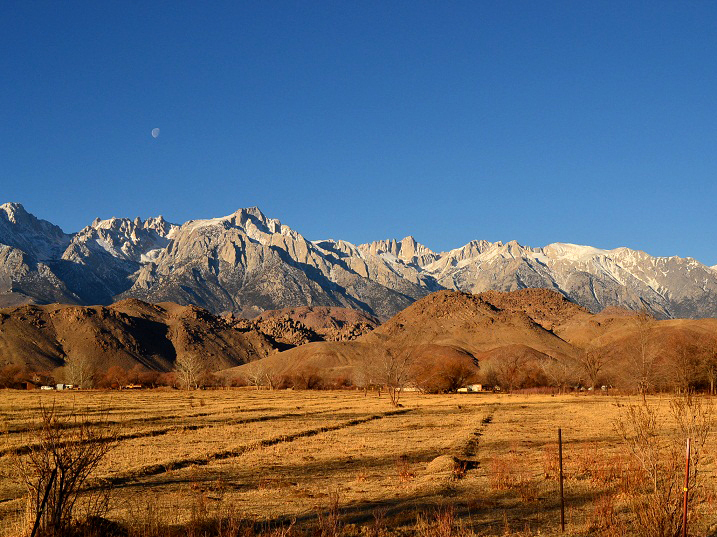 Owens Valley and the Sierra Nevada, the high desert environment that is drier today because of a century worth of water diversions to Los Angeles, some 200 miles away.

"We're measuring dust levels 10 times higher than the standard, where no other desert areas in the West are seeing levels that high, so something is still wrong," Schade says. "It may have been a dusty place, but it wasn't this dusty."

On a dirt road tucked off Highway 395, Mel Joseph climbs a ladder to the top of an air quality control monitor that he operates for the Lone Pine Paiute-Shoshone tribal community. These days, Joseph says, there are a lot fewer stage-one air alerts, but they still happen.

"It's an environmental justice issue as well for us, as to why our reservation is located 5 miles from the nation's largest source of particulate pollution," Joseph says.

He says the city of L.A. is still to blame for that pollution. Up and down the rural valley, there has been no love lost for the city's DWP since it began diverting water here 100 years ago.

"It's a desert climate, but they made it the dust bowl that it is today," Joseph says.

And this battle flows like many other water disputes in the arid West do — into the courts. They'll decide whether Los Angeles has done enough to control the dust bowl, or whether it'll have to spend millions of dollars more to finish the job.