"Cutting Ribbon, Man In Wheelchair, Paintings (Version #2), 1988" shows John Baldessari's signature technique, faces covered with colorful circles. The practice had its genesis when the artist idly stuck a price sticker on the face of someone pictured in a newspaper clipping. Courtesy the artist/John Baldessari Studio hide caption

There are certain creations that have defined beauty for generations: Renoir's pudgy, pink nude; Rothko's brilliant blocks of color that seem to vibrate; Michelangelo's naked young man in marble, with a slingshot on his shoulder.

In Venice, Calif., 81-year-old artist John Baldessari respects these definitions — and then turns them upside down. Baldessari is an icon in some art circles, especially in Southern California. Six-foot-seven, with long white hair and a beard, he's been called "a towering figure." Thoughtful and provocative, he has burned his own paintings, put colored dots over faces in photographs, and covered floors at the Los Angeles County Museum with a carpet of blue sky and puffy white clouds.

Lots of times, a Baldessari makes you smile, then go ... "Huh?" In his sunny studio, the artist says he's trying to slow us down, to look in new ways.

"You know, when you're sitting in a dentist office or doctor's office, and you look in a magazine and, and you go, 'What was that?' I would like people to have that feeling, you know, that, 'Wait, what did I just see?' " Baldessari says with a laugh.

Like with the colored dots pasted onto photographs — they're actually price stickers. Over the years he'd been collecting black-and-white news images — pictures of people at various civic occasions.

"I just got so tired of looking at these faces," Baldessari says — faces of mayors shaking hands with firefighters, faces of local officials at ribbon-cutting ceremonies.

In 1985, in a fit of pique, Baldessari covered the faces with colored dots. 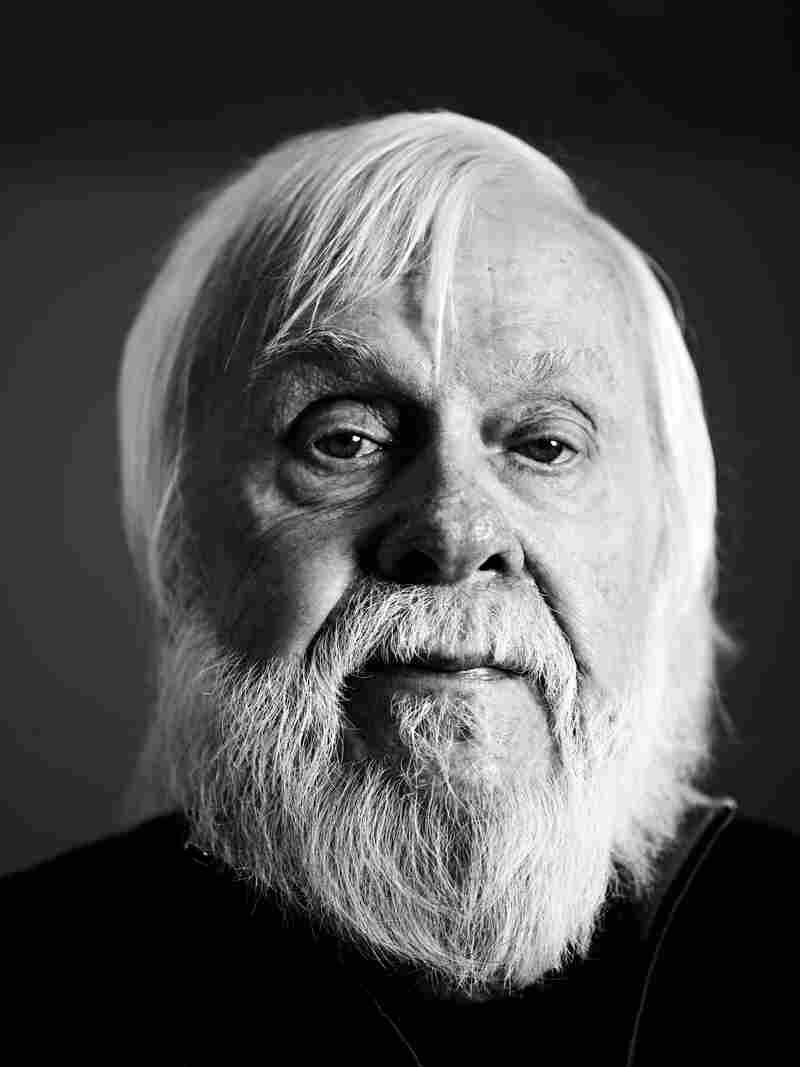 In 1970, John Baldessari burned everything he had painted between 1953 and 1966. "I said ... 'I don't really need them.' So I decided I'll just destroy them." After that, Baldessari turned to photography and sculpture. Hedi Slimane/Courtesy the artist hide caption 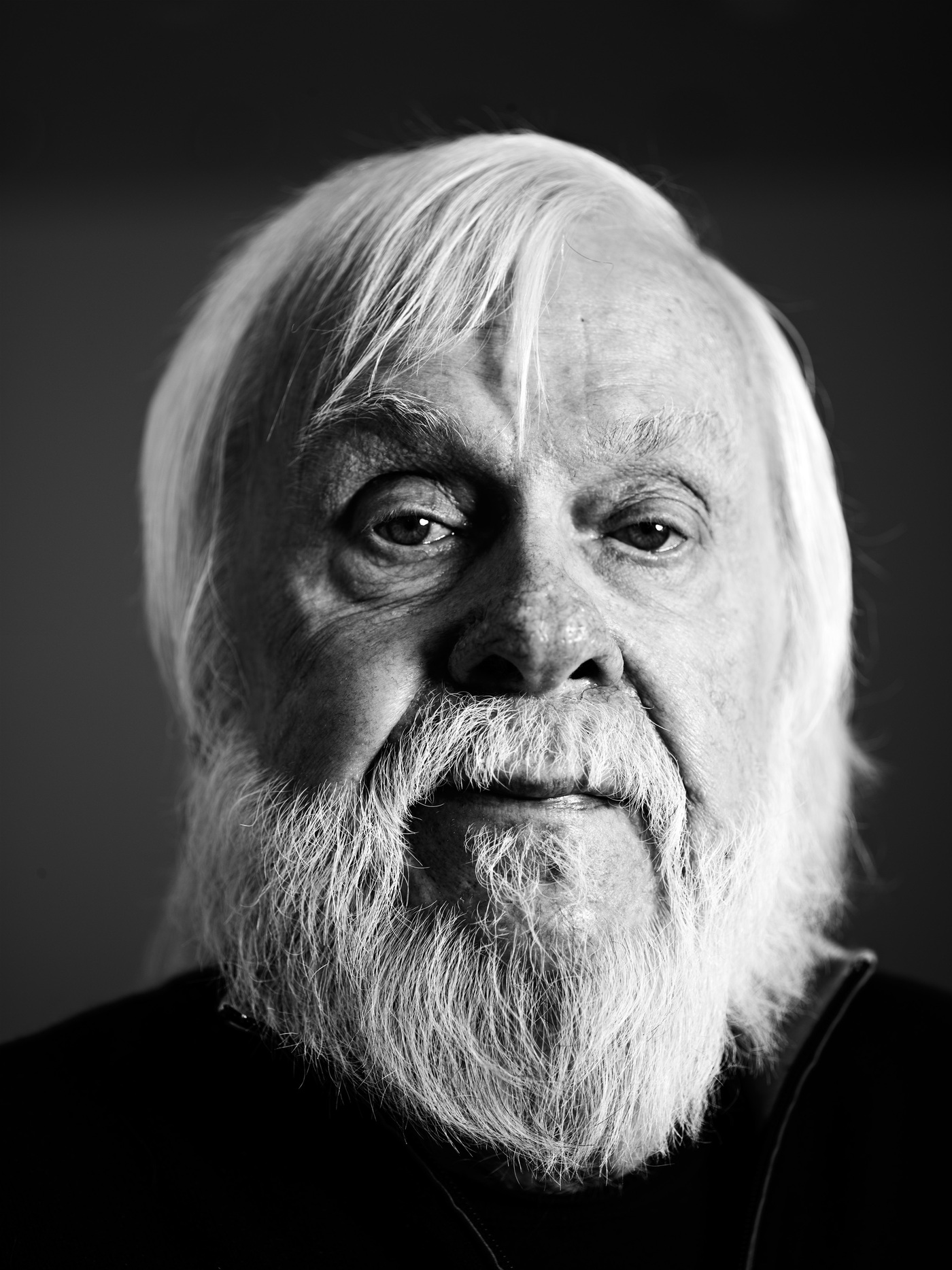 In 1970, John Baldessari burned everything he had painted between 1953 and 1966. "I said ... 'I don't really need them.' So I decided I'll just destroy them." After that, Baldessari turned to photography and sculpture.

"If you can't see their face, you're going to look at how they're dressed, maybe their stance, their surroundings," he explains. "You really do see that handshake. You know, it's not about those guys, it's about that handshake. It's about cutting that ribbon."

But aren't the human faces the most interesting part? Why leave a viewer with only mundane objects — scissors and a piece of ribbon?

"Why do I leave it? Because I — I think you really sort of dig beneath the surface and you can see what that photograph is really about, what's going on," says Baldessari.

"If you obliterate the face, then you begin to see the hands and the ribbon as full of meaning," Govan says, "because no two ribbons, no two hands, no two ceremonies are the same."

In Govan's mind, that specific device — the colored dots — speaks to Baldessari's technique more generally: "Sometimes he takes away the thing that's most obvious in the center of your vision, forces you to look at everything else, almost for the first time, to make new sense of what you're seeing."

Govan calls Baldessari "one of the most influential artists working today," a pioneer of "conceptual art," where it's the idea that counts — the idea in the artist's head that becomes art in the heads of viewers as they try to puzzle it out.

I've often thought of Baldessari's work as kind of a surrealism for the media age ... because he's taking pre-existing imagery and reconfiguring it and creating new realities, or surrealities.

LACMA curator Leslie Jones says Baldessari chews up the familiar and spits it out into something else.

"I've often thought of Baldessari's work as kind of a surrealism for the media age, if that makes sense," Jones says, "because he's taking pre-existing imagery and reconfiguring it and creating new realities, or surrealities ... from them."

In 1970, Baldessari was painting in San Diego and, he says, getting nowhere. He had no gallery, no audience and no buyers for his pictures.

He took everything he'd painted from 1953 to 1966, found a mortuary and cremated all of it. Burned his body of work. Nine-and-a-half boxes of ashes later, he still has no regrets about losing any of them. It was a ritual act of purification. A farewell to the tradition of painting. And a rebirth for him. He turned to photography as his main medium of expression and communication — the modern medium, Baldessari believes. 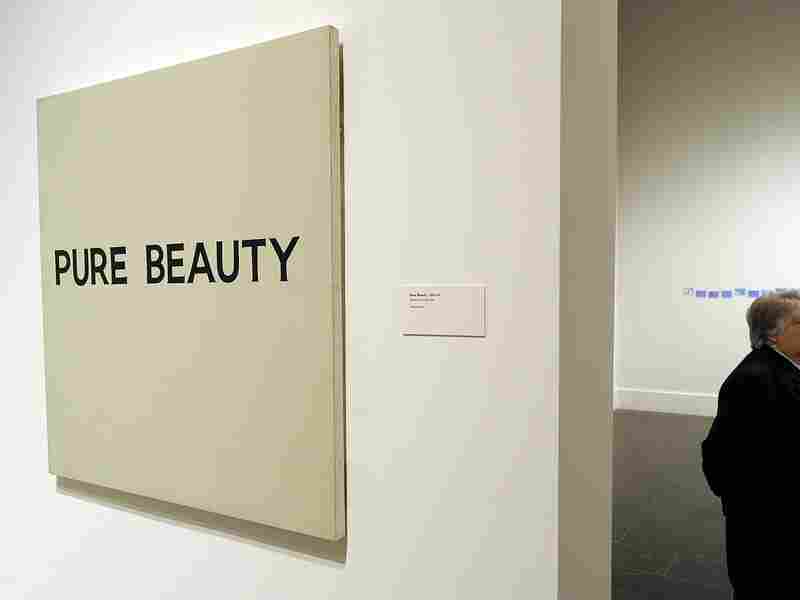 "Pure Beauty," shown here at the Metropolitan Museum of Art in New York in 2010, is one of John Baldessari's many provocative "text paintings." Timothy A. Clary/AFP/Getty hide caption

He did save some "text paintings," though. He was experimenting with using words in his work, and "Pure Beauty" is one example. Those two words, in black capital letters, on a painted white canvas. Jones, who curated a Baldessari show called "Pure Beauty," says he was, again, trying to get us to think.

Govan says that from childhood on, we're taught certain standards of beauty.

So, just two simple words on a canvas ... that can be pure beauty. It's funny, this stuff. Makes you laugh — at first.

"I would say that John's work possesses something like deep humor," Govan reflects. "It's funny, but ... it leads you somewhere. It's never a one-liner that ends there. It's always based on some deep philosophy, consideration, reconsideration, way of seeing. It's never just funny for the sake of being funny."

Baldessari finds humor — in his work and in this world. Awhile ago, one of his text paintings sold for $4.4 million.

A smile, a farewell handshake, and John Baldessari gets back to work.

Watch A Brief History of John Baldessari, directed by Henry Joost and Ariel Schulman and narrated by Tom Waits.