Accessibility links
The 'Nasty Effect': How Comments Color Comprehension At its best, the Web is a place for unlimited exchange of ideas. But the uncivil discourse that unfolds in comments sections can be poisonous. A study in the Journal of Computer-Mediated Communication suggests that rude comments on articles can change the way we interpret the news. 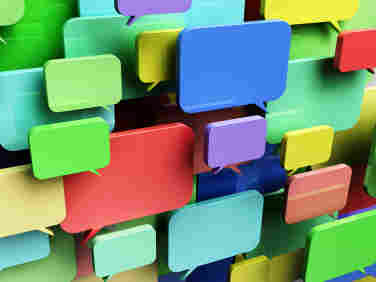 Dominique Brossard, professor in the Department of Life Sciences Communication, University of Wisconsin-Madison

At its best, the Web is a place for unlimited exchange of ideas. But Web-savvy news junkies have known for a long time that reader feedback can often turn nasty. Now a study in the Journal of Computer-Mediated Communication suggests that rude comments on articles can even change the way we interpret the news.

"It's a little bit like the Wild West. The trolls are winning," says Dominique Brossard, co-author of the study on the so-called nasty effect. Those trolls she's referring to are commenters who make contributions designed to divert online conversations.

Researchers at the University of Wisconsin, Madison, and Virginia's George Mason University worked with a science writer to construct a balanced news story on the pros and cons of nanotechnology. More than 1,000 subjects reviewed the blog post from a Canadian newspaper that discussed the water contamination risks of nanosilver particles and the antibacterial benefits.

Half saw the story with polite comments, and the other half saw rude comments like, "If you don't see the benefits of using nanotechnology in these products, you're an idiot."

"Basically what we saw," Brossard says, "is people that were exposed to the polite comments didn't change their views really about the issue covering the story, versus the people that did see the rude comments became polarized — they became more against the technology that was covered in the story."

Brossard said they chose the nanotechnology topic so that readers would have to make sense of a complicated issue with low familiarity. She says communication research shows that people use mental shortcuts to make sense of things they don't understand.

Brossard says there's no quick fix for this issue. While she thinks it's important to foster conversation through comments sections, every media organization has to figure out where to draw the line when comments get out of control.

Some sites remove offensive comments, some have moderators to regulate the conversations, and others turn off commenting features once a certain number is reached. Brossard says it's important for people involved in journalism and online communication to realize the influence that comments can have and to formulate appropriate policies.

"I think what we need to define now on the Web, what is a good conversation? What are the things that are allowed socially? Also, as an audience, what do we let happen there?"

Read The Study From The Journal Of Computer-Mediated Communication