Accessibility links
In Upcoming Venezuelan Vote, Hugo Chavez Looms Large With Chavez gone, his handpicked successor is in the spotlight. Nicolas Maduro has adopted Chavez's style and anti-imperialist rhetoric. That should help boost his appeal as he faces opposition leader Henrique Capriles in a special election April 14. 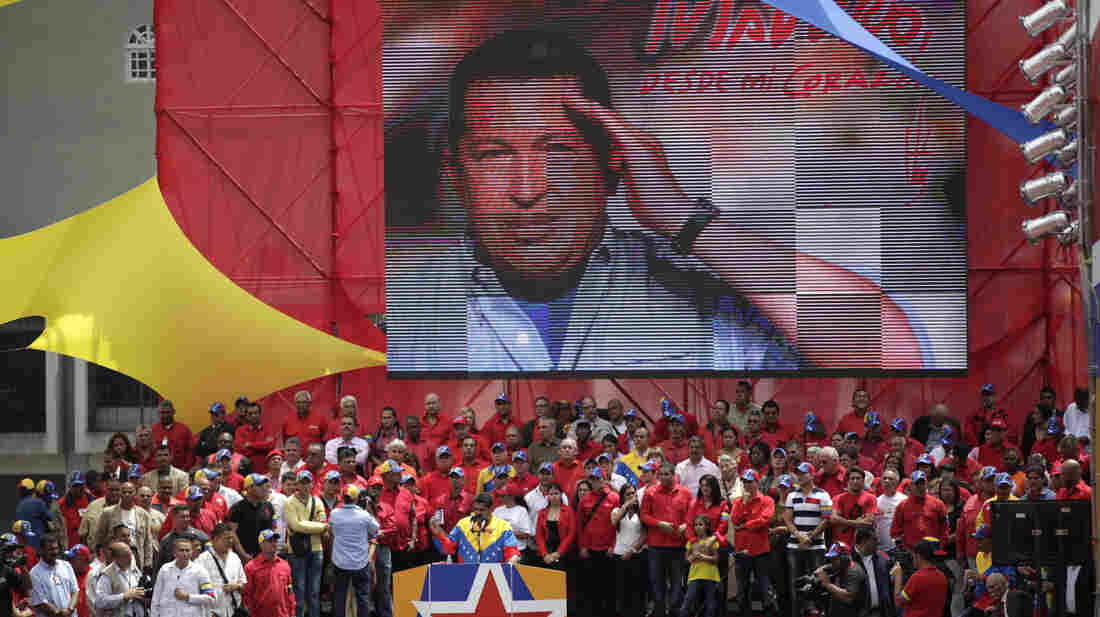 An image of late President Hugo Chavez hangs behind acting President Nicolas Maduro, as he speaks to supporters after registering his candidacy outside the national electoral council in Caracas, Venezuela, on Monday. Ariana Cubillos/AP hide caption 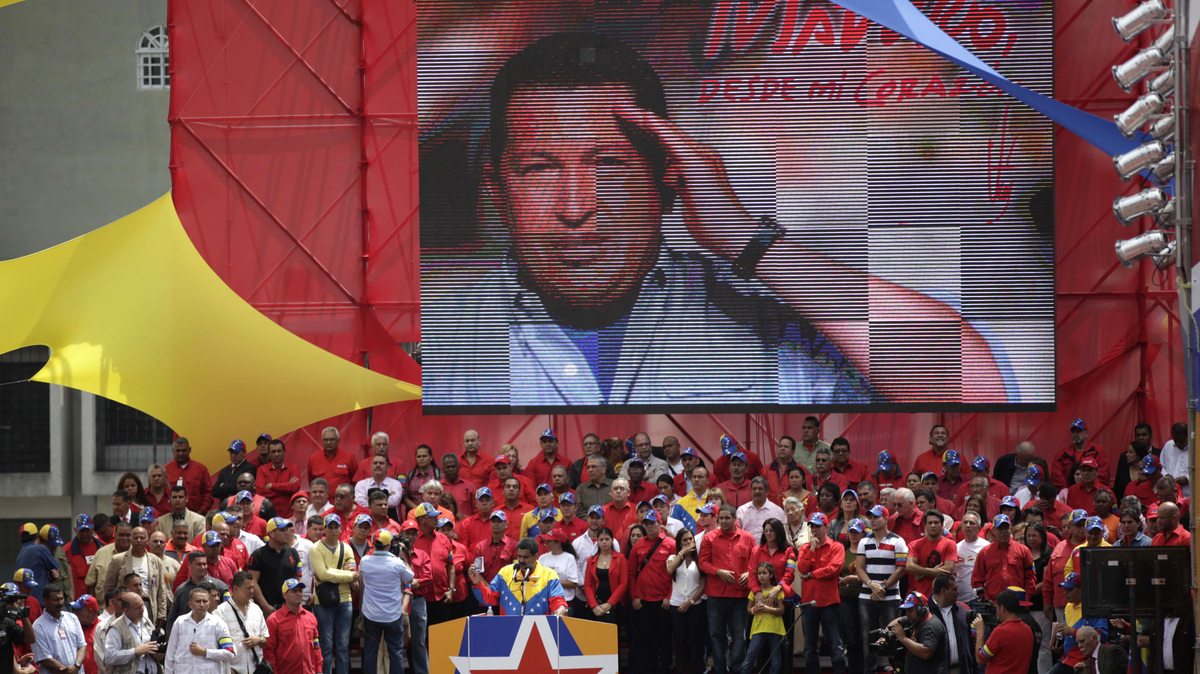 An image of late President Hugo Chavez hangs behind acting President Nicolas Maduro, as he speaks to supporters after registering his candidacy outside the national electoral council in Caracas, Venezuela, on Monday.

The tall and imposing Nicolas Maduro stepped forward last week to be sworn in as Venezuela's interim leader following the death of President Hugo Chavez.

Before the country's packed congressional hall, he swore to complete Chavez's dream to transform the OPEC power into a socialist state, allied with Cuba and decidedly opposed to capitalism and U.S. interests in Latin America.

It's a dream Maduro says will not die, even with the death of El Comandante. Maduro told the country that he wasn't taking the oath because of ambition, vanity or because he comes from the Venezuelan elite.

The lawmakers and Chavista rank and file responded with cries of, "With Chavez and Maduro, the people are safe." 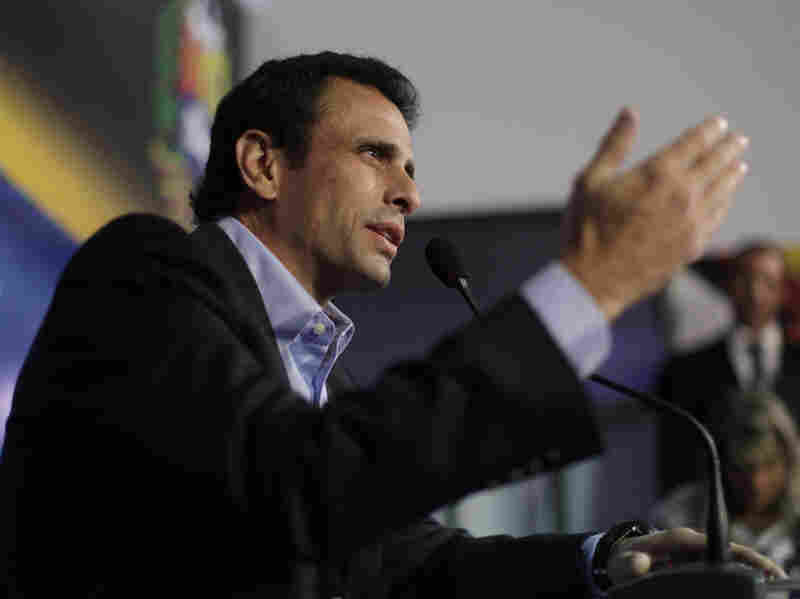 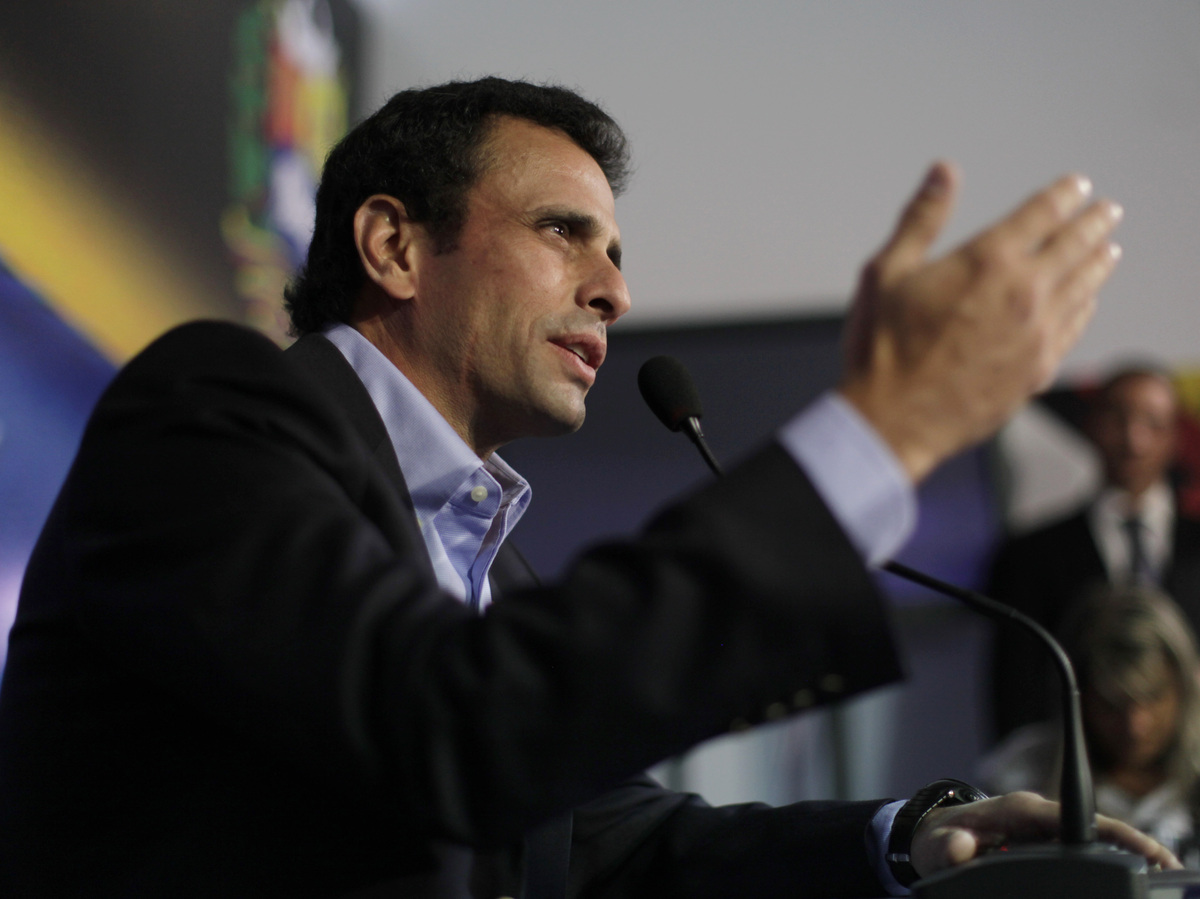 Maduro, to be sure, is solidly in charge of the government. Chavez, in his last public comments in December, told Venezuelans that Maduro was his political heir — and that gives Maduro a big advantage over the opposition in a snap election scheduled for April 14.

Still, Maduro is in for a scrap.

On Sunday, opposition leader Henrique Capriles accepted the nomination to take on the new president. Addressing Maduro, Capriles said he wouldn't step aside and allow Chavez's successor to have an easy road to long-term power.

Capriles said the government knew Chavez was in his death throes for weeks, and had been planning for this election. He also accused Maduro of using Chavez's death for political gain and to bolster support from the former president's die-hard loyalists.

The government hasn't stopped talking about Chavez or showing his image on its many state television stations. Chavez still sings guitar-laden llaneras on TV — the music of the great southern plains where he was born.

In one hagiographic spot, a poem is read about how Chavez is still here, in spirit, leading the country and his self-styled revolution. He wades into crowds, kissing babies and singling out poor followers for hugs.

It's powerful imagery, and it helps Maduro.

Out on the streets, where revolutionary songs still play, the president's supporters recall Chavez's last public words on Dec. 8: "Vote for Maduro if I'm not here."

Watching TV that day, 54-year-old Maria Andrade says that if the election were tomorrow, "I'm sure all Venezuelans would be in the street to vote for Maduro.

"That's what the president told us to do," she says.

That sentiment is perhaps shared by millions. But Maduro, once a reserved apparatchik, is also adopting the same intonation and fiery rhetoric as Chavez. He calls his opponents part of a rancid oligarchy out to sack the country, a favorite Chavez put-down.

Madura has also suggested that Venezuela's historic enemy — by which he means the U.S. — has something to do with Chavez getting cancer.

Reacting angrily to Capriles' accusations, Maduro said Sunday he'd remain loyal to the principles of the late president and the guiding light of the revolution — Simon Bolivar, hero of the independence era.

He also had a warning for what he called "ambitious oligarchs and imperialists."

"There are no imperialist claws that can handle this sacred land," Maduro said. "This sacred land of Simon Bolivar and Hugo Chavez."