Accessibility links
Syrian Cyber-Rebel Wages War, One Hack At A Time A 28-year-old computer wizard known as the Harvester, along with his online rebel friends, have hacked into a pro-regime TV station as part of their ongoing battle against the government's electronic army. 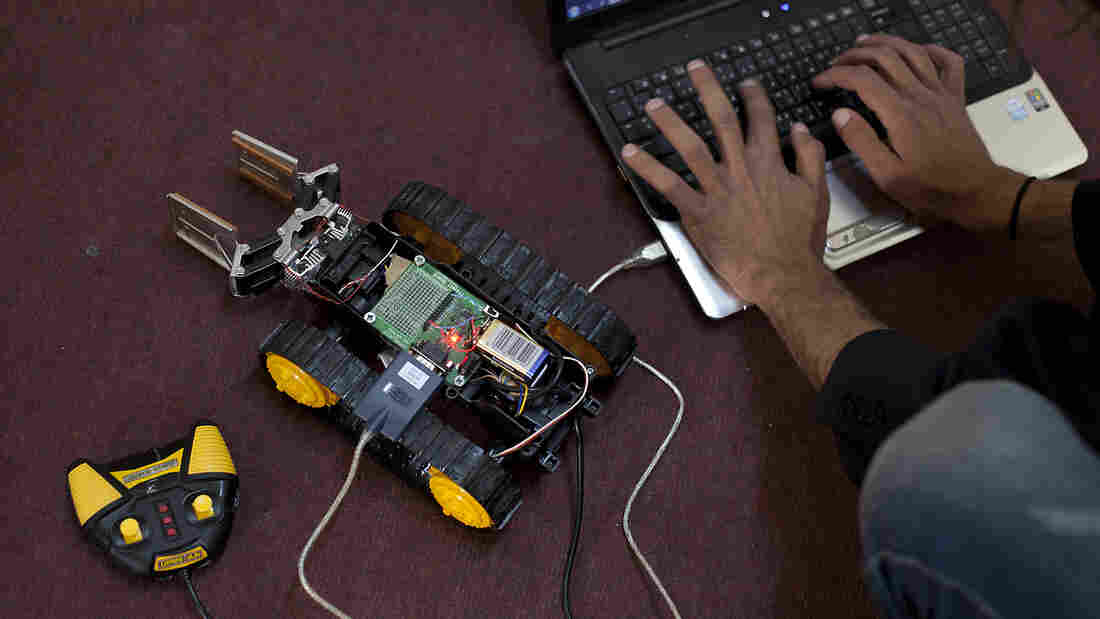 Ahmad "Harvester" Heidar is a computer software engineer whose work for the Syrian rebels includes sweeping the hard drives of detained anti-government activists, and trying to develop a robot that will help extract sniper victims in Syria. Turkish officials have given Heidar the green light to develop a prototype of his robot, which he calls Tina. Jodi Hilton for NPR hide caption

The Internet is a battleground in Syria, a place where President Bashar Assad's regime has mounted a sophisticated surveillance campaign that includes monitoring and arresting activists by tracking their Facebook pages.

The Syrian Electronic Army, an arm of the Syrian military, is in charge of the monitoring.

But online rebels have mounted a counteroffensive. One cyber-rebel, part of a group called the Pirates of Aleppo, is fighting a lonely war in front of a computer screen in a cramped hotel room in southern Turkey, near the Syrian border.

He says his name is Ahmad Heidar when we meet on the streets of Kilis, a Turkish border town. The 28-year-old software engineer, in black suit, tie and dark glasses, hardly looks like a rebel.

But he's better known by his online name: Harvester. He's a hacker, and he's waging an electronic battle against the Assad regime, trying to shut down the website of the Syrian Electronic Army.

Can he beat the Syrian Electronic Army?

"Not alone — no one can take an army alone," he responds. "You know that."

In the summer of 2011, protests spread across the country and the regime was gearing up to stamp out dissent. In Aleppo, Heidar was approached by an Assad government recruiter for a new electronic warfare unit that needed software specialists. If he joined, he was told, it would count as his mandatory military service.

"They offered me a place there, so I couldn't say no right away," Heidar says. "It was a normal computer shop and it's got a back door, and it was like another world."

What he saw was an underground bunker with banks of sophisticated equipment, including American technology that Heidar was surprised to see. That's because Western sanctions ban the sale of this type of U.S. gear in Syria.

"I'd never seen them before," he says.

"I asked more about it," Heidar adds. "I just wanted to know how strong they were."

They were very strong, he concluded, as this electronic army tracked activists through Facebook pages, leading to arrest and often torture.

Heidar turned down the offer to join the regime and turned instead to protecting anti-government activists.

"We will get a call, like some student at the university. 'He's in prison now. Do something about it,' like clean up his page," he says.

As the "Harvester," he hacked into the student's Facebook pages and Skype account for the cleanup — removing anything incriminating, anything that connected the arrested activist to the revolt.

"We replaced the flag of the revolution with pornography," he says, "like pictures, you know, to keep the investigator busy."

"The [activist] would come out of prison, and they would say they were tortured a little bit, but not serious. But it worked," Heidar says.

It also worked when he helped another group of hackers break through the firewall of the pro-regime TV station Al-Dunya. As a newscast began, a message appeared on the screen: "President Bashar Assad stepped down for the good of the people."

Heidar saw it; he was at home with his family at the time.

"It was actually just [a] breaking news banner," he says. "My dad didn't want me to do anything stupid, as he said at that time, but we continued, actually, for months."

He played an electronic cat-and-mouse game with pro-regime software engineers.

"Dealing with computer viruses and programming languages, it's like jiujitsu or karate," Heidar says. "We know each others' moves."

But electricity and the Internet have been out for months in his hometown of Aleppo. So he slipped across the border to southern Turkey and lives out of a suitcase in a cold, cramped hotel room. It's barely big enough for a narrow single bed and a high-powered computer.

This is where he has drawn up his latest plan: a rescue robot named Tina.

He has designed a computer simulation of his robot, a big metal box with computer-controlled titanium arms that scoop up the victims of snipers shot on the streets of Aleppo.

Heidar has watched the real thing hundreds of times — he had a library of videos of sniper victims and attempts to rescue them.

"In some videos," he recalls, "you would see four being killed because of one leg injury."

He punches the play button on one video, in which several men risk gunfire to help a bleeding woman who is sprawled on the ground.

They are dragging her with ropes and metal bars.

"I respect those guys because it's everything they got," Heidar says, "but I can do more."

His robot project is part of his war against the Assad regime: "It's like playing chess. Now, OK, here's my move. Show me what you've got."

Turkish authorities gave him approval to build a prototype of Tina, which he says is named after "a redhead he met on a flight." Heidar is now looking for donations to support his team of rebel programmers.

In the meantime, he is refining his plans for a man-sized box with robot arms driven into a war zone on the front of a bulldozer. He believes he can save lives.

"I'm going to also play reggae music just for the injured guy so he won't freak out at this big thing coming toward him, to communicate, you know, so he will feel safe," Heidar says. "If you think I'm crazy, I am. You are right."