Accessibility links
At SXSW, A 71-Year-Old Guitarist Makes A Belated Debut On an album released nearly 50 years ago Harry Taussig demonstrated an accomplished, self-taught style of improvisational guitar. This week in Austin, Texas Taussig will perform in public for the first time. 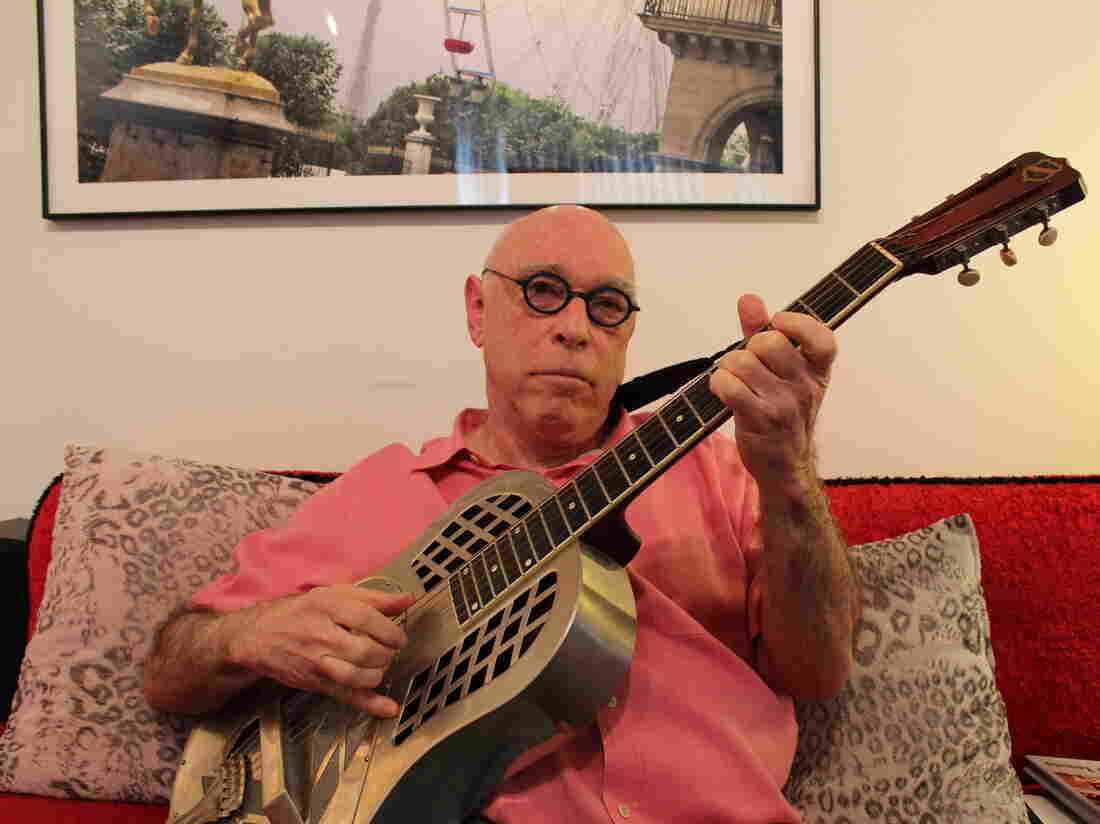 At age 71, nearly 50 years after his first album, guitarist Harry Taussig is releasing a follow-up — and making his concert debut at South by Southwest. Jacob Margolis for NPR hide caption 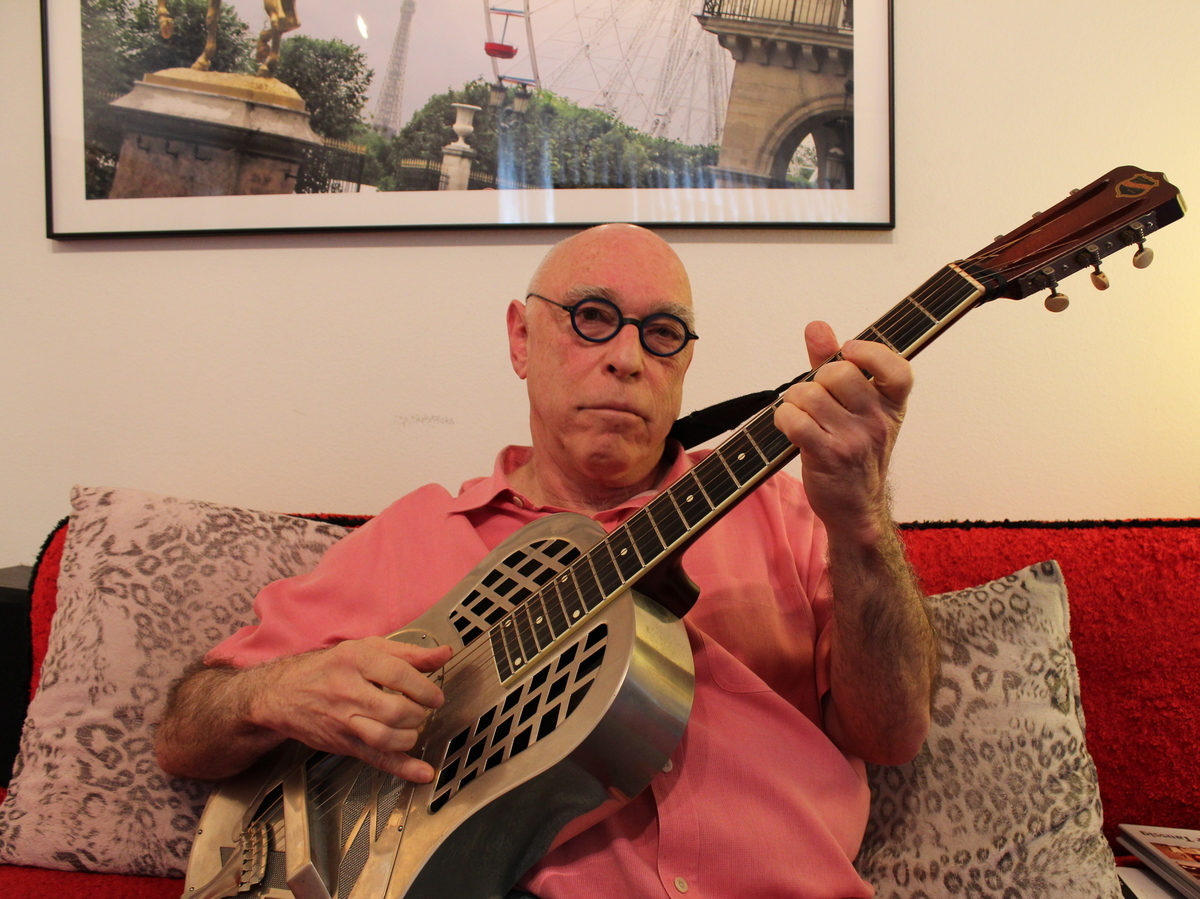 At age 71, nearly 50 years after his first album, guitarist Harry Taussig is releasing a follow-up — and making his concert debut at South by Southwest.

This week, about 2,000 bands from around the world are performing at various venues throughout Austin, Texas, for the South by Southwest music festival. Many of the musicians are young and have had plenty of experience performing in public.

And then there's guitarist Harry Taussig, who is nearly 72 years old. On Thursday, he'll be performing live for the first time ever.

Taussig never really meant to be a musician. He majored in physics at the University of California, Berkeley. But like many Berkeley students in the 1960s, he was into Kingston Trio-type folk music and noodled around a bit on the guitar. Then one day in a music appreciation class, his teacher analyzed the opening bars of Mozart's Requiem.

"It struck me that what she was doing, in principle, was very similar to the complexity that Mozart was doing," Taussig says. "And I said, 'The Kingston Trio sort of treats their guitars like ukuleles and washboards, just sort of strumming chords. There is so much more to it than that.' "

So Taussig messed around with the idea of playing both melody and bass at the same time and fused classical compositions with roots music from the South. He started developing his own, mostly self-taught style of guitar, incorporating everyone from John Cage to North Carolina gospel and blues musician Gary Davis.

"I didn't want to reproduce folk music, 'cause hey, I'm a city boy, you know? I'm not from North Carolina," Taussig says. "I should not be playing that stuff. But again, I felt like I could extend it. I could push it further than it had been."

After college, Taussig moved to Southern California, where he'd occasionally play this odd brand of music for close acquaintances. Then, in 1965, a friend asked him if he'd be interested in recording an album.

"It was a 45-minute album and he rented one hour of studio time — which means no retakes," Taussig says. "The album to me is still pretty embarrassing because of flubs and disasters and mistakes. ... It was very scary."

He named the album Fate Is Only Once. It was a mix of traditional songs and some of his own — mostly improvised — compositions. But the album didn't go far; it was a limited run and few copies sold. At the time, further pursuing a career in music didn't seem worthwhile.

"The problem is, I don't play well with other people," Taussig explains. "I tried to play in a band once but it wasn't for me. I tend, for instance, to switch time signatures without warning. ... So, a solo guitarist playing obscure strange music? Ah, no, I don't ever think that was ever a living."

He took his degree in physics and worked in the defense industry. He also took up photography, art and film studies, teaching all three at a community college under the name Arthur Taussig. He even wrote a film analysis book intended to help parents decide which movies to watch with their kids. Music took a back seat: He gave his last guitar away decades ago to one of his students.

But in 2005, the owner of a small record label got a hold of Fate Is Only Once.

"It is very spooky," says Josh Rosenthal, the founder of Tompkins Square Records, who heard something different in Taussig's recordings.

"He was a pioneer," Rosenthal says. "There just were not that many people making music that sounded like that in 1965."

Rosenthal reached out to Taussig and convinced him to reissue Fate Is Only Once, 41 years after its initial release. He says his favorite track on the album, a song called "Dorian's Sonata," is a great example of Taussig's unique sound.

"He's not just melancholy like a lot of solo guitarists," Rosenthal says. "There is something ancient in his playing, and something sort of Baroque in it. And he's most interesting because he's not a guitarist that folks would point to and say, 'Wow, listen to his chops!' Some might argue that he is not that very good of a guitar player."

But the reissue of Fate Is Only Once earned Taussig new fans and sold quite well — so well that Taussig decided to record a follow-up album after a 47-year hiatus from music. He named this sophomore effort Fate Is Only Twice. This time around, he recorded his original compositions sitting on a cherry red love seat in his living room with a lone microphone and a Dell laptop.

The technology may have changed since 1965, but Taussig's songwriting process hasn't. He still relies heavily on improvisation.

"With the music, I want to tell a story but I don't want that story understood," Taussig says. "I want someone to feel there is a story there, but they can't quite connect with it, so it sort of hangs in the air. I like that. It's kind of fun."

Taussig says he often forgets the songs he writes soon after recording them, another reason why he's shied away from performing live. But that fear hasn't stopped him from heading to Austin to perform at South by Southwest. Although it has made him somewhat apprehensive about playing his very first show at 71 years old.

"My great fear is that I'll be eating tomato salads for the next three weeks from what people throw at me," Taussig says. "So I'll bring my own basil and mozzarella to make a nice insalata caprese."

But then he remembers the old saying: "Guitar players are like hookers. When they last long enough, they became respectable."