Accessibility links
Whatever Happened To The Real Gingers And Rosas? The lives of the fragile young women featured in Sally Potter's new film, Ginger & Rosa, rang remarkably true to another child of the swinging London of the 1960s. But it wasn't all peace, free love and flowers, says film writer Ella Taylor. 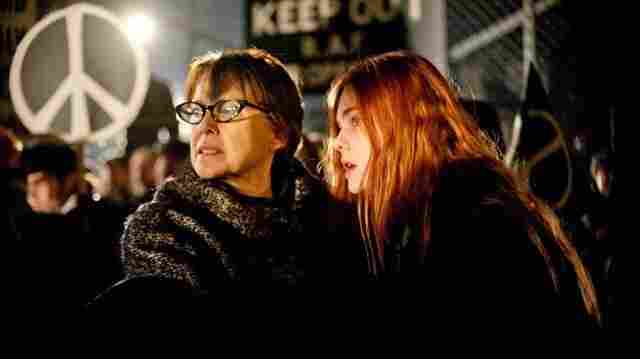 The '60s London of the unhappy adolescent Ginger (Elle Fanning, with Annette Bening's mentoring May) was more complicated than students Ginger's age understand today. Film writer Ella Taylor, who lived through that decade, came late to an understanding of the toll it took on young women like Ginger. A24 hide caption

A few weeks ago, I asked a class of college undergraduates what the 1960s meant to them.

The further we get from that misunderstood decade, the more the many strands of its rebelliousness get reduced to a pop-culture T-shirt slogan, a cartoon strip starring tie-dyed youth with stoned eyes and floor-mop hair.

But in London, where I came of age in the mid-'60s, "that flower-power thing" came late — and, by North American standards, pretty watered down. Carnaby Street aside, for much of the '60s the British counterculture was all business, meaning Marxist socialism and the anti-nuclear movement. 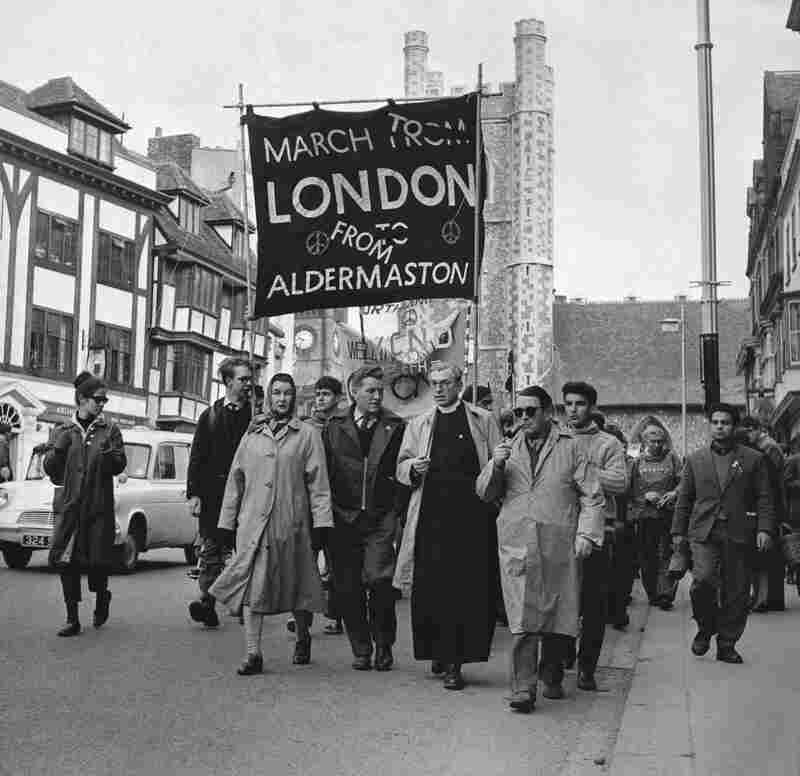 The 1963 nuclear disarmament demonstration known as the Aldermaston March, which culminated in a speech by the aristocratic British social critic Bertrand Russell, was characteristic of left-leaning activism in 1960s London. Film writer Ella Taylor (not pictured) participated in many such demonstrations in her youth. Hulton-Deutsch Collection/CORBIS hide caption 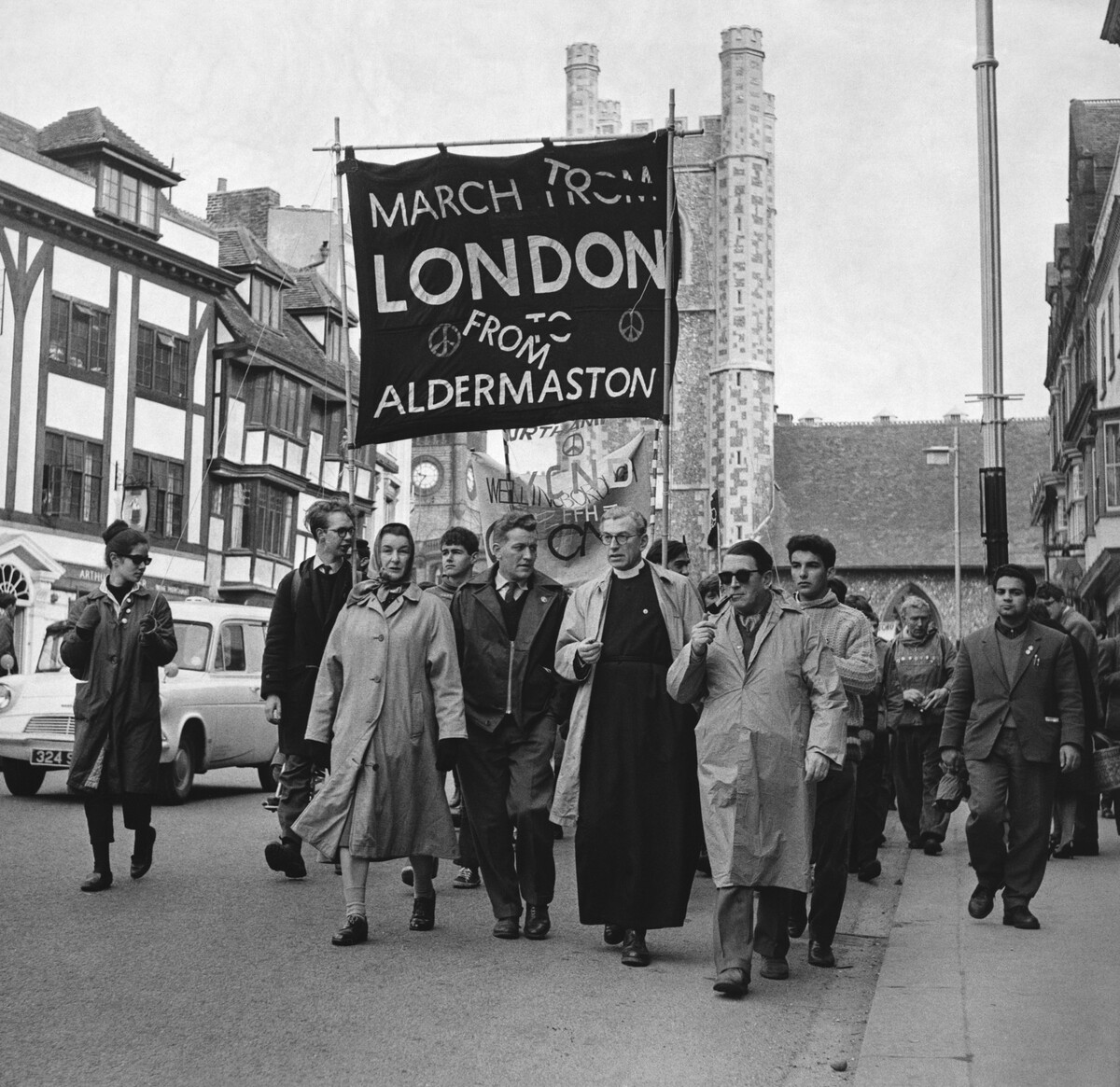 The 1963 nuclear disarmament demonstration known as the Aldermaston March, which culminated in a speech by the aristocratic British social critic Bertrand Russell, was characteristic of left-leaning activism in 1960s London. Film writer Ella Taylor (not pictured) participated in many such demonstrations in her youth.

Feminism hovered in the wings, but at the time my girlfriends and I read Sartre (or tried to, or just said we did) and marched with the Campaign for Nuclear Disarmament, there to lust after intense young men in duffel coats who held forth on the iniquities of Cold War saber-rattling.

I was far too self-absorbed to feel real fear at the prospect of being vaporized by a mushroom cloud — the image that opens Sally Potter's wonderfully high-strung period piece, Ginger and Rosa. Potter's semi-autobiographical domestic melodrama is set in a romantically seedy part of London in 1962, when the director was entering adolescence. Like Potter was then, its eponymous central figure (that would be Ginger) is a sensitive young redhead and budding artist played by Elle Fanning.

Like Ginger, I wore my hair long and straight (ironing was optional), my men's sweaters baggy, my glasses wire-rimmed, my expression pained for the sorrows of the world. Like her, I was miserable — though as it turned out, with far less reason.

I didn't run with girls like Ginger or her best friend Rosa (Alice Englert). Coming from a reasonably stable, lower-middle-class suburban family, I slogged my way obediently through the advanced curriculum and never played hooky. As the first member of my extended family to apply to university, I sensed there was far too much at stake to goof off. In most countercultures, it's the elite who rebel.

Intimidated by the posh accents and willowy grace of the Gingers and Rosas (they had no hips at all), by their air of bohemian rebellion and contempt for rules, their sexual precocity and nervous gaiety, I gnawed on my envy from afar. Once, after a CND demonstration, I actually got invited home by one of them. The genteel poverty of her mother's boho flat, with its faded Persian carpets, peeling wallpaper and teetering piles of books by Freud and Heidegger — it all thrilled me to bits.

Only when I got to university — the great class leveler designed by a post-World War II Labour government — did it become obvious how fragile and vulnerable these young women were, how meshed the personal and the political were for them, and not in a good way.

That, in part, is Potter's subject. Raised, after a fashion, by pale-and-romantic single mothers with names like Anoushka and Nat, the two girls are walking on quicksand. Ginger resents her mother (Christina Hendricks), a stalled artist who remains in resentful thrall to her estranged partner, Roland (Alessandro Nivola). But she adores her father, a narcissistic champagne Marxist who blathers on about the oppressor classes, then abuses his own power over his daughter and her credulous friend in a way that would devastate most young women.

In a crisis Roland crumples, as does Ginger's mother, leaving their distraught daughter's emotional rescue to a gay couple (Timothy Spall and Oliver Platt) and their brainy American friend (Annette Bening), all of whom have a great deal more to lose by questioning authority than does Roland.

Watching this scenario unfold, I understood why so many girls like Ginger and Rosa fell apart when they got to college. They clung like limpets to charismatic male leaders of the campus revolt, who sloughed them off when they grew tiresome or needy. Some of them overdosed before finals, or dropped out altogether and became their mothers, sporadically attached to feckless men who repeatedly left them holding the babies.

Potter doesn't reduce Ginger's radicalism to her screwed-up family, still less to the miseries of adolescence. She treasures her artistic milieu and gives us no reason to doubt the girl's genuine terror of a nuclear holocaust. But bohemian or not, at home Ginger has no safety net, no source of comfort to allay her fears of world annihilation, which grow all the more terrifying for overlapping with her rickety home life.

I often wonder what became of the Gingers and Rosas, most of whom seemed to drop out of sight once we left university. Undoubtedly the women's movement bailed out Potter, most of whose movies — including her famously stylized adaptation of Virginia Woolf's gender-bending 1992 Orlando with Tilda Swinton — are inspired by feminism. With any luck, it saved Ginger and friends too.