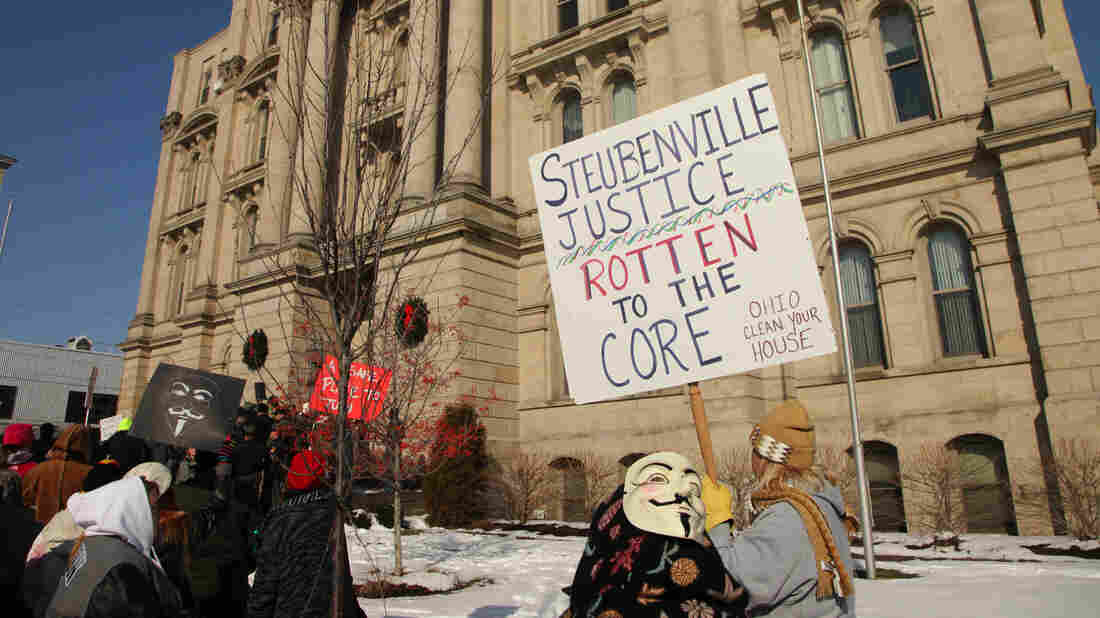 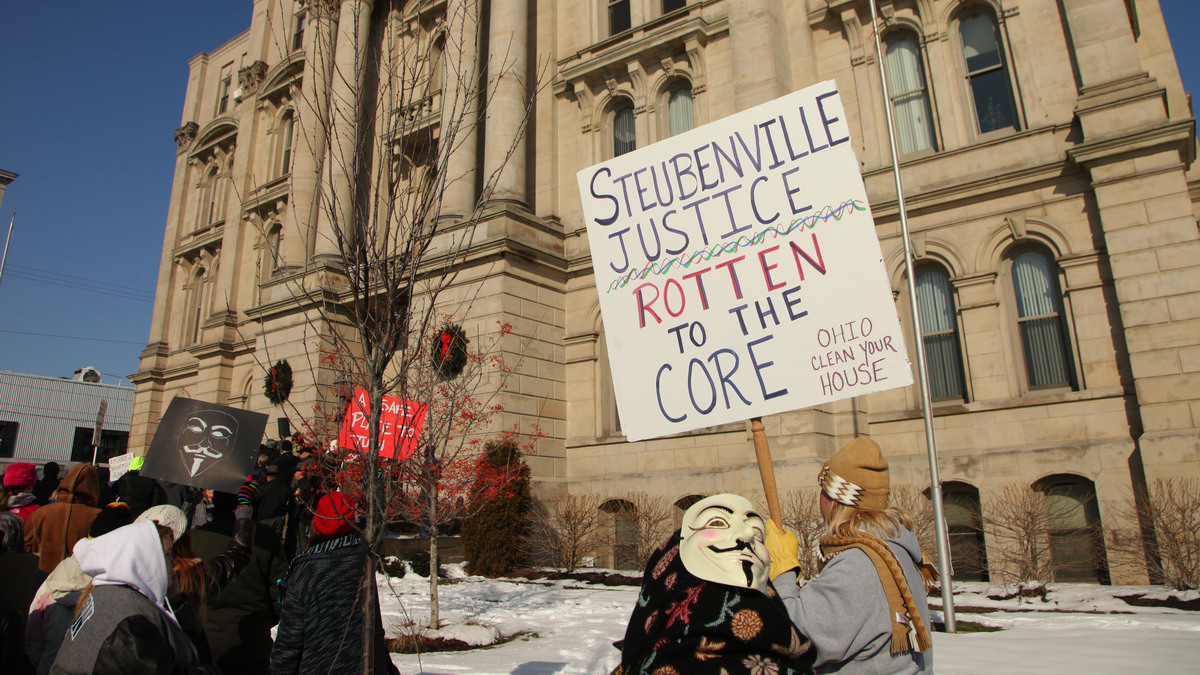 Protesters rally on the steps of the Jefferson County Courthouse in January in Steubenville, Ohio, over a rape case involving local high school football players.

The Ohio River town of Steubenville is back in the national spotlight this week, as the rape trial of two high school football players has begun.

Inside the courthouse, a judge is considering whether a 16-year-old girl was so drunk last summer that she couldn't consent to sex — and whether the boys knew it.

But outside, the case continues to spur debate over teen drinking, sex, football culture and the ability of social media to amplify it all.

'They Don't Know Us'

A dozen satellite TV trucks are parked outside the courthouse in this city of fewer than 20,000 people.

Judges in two states have been drawn into the case, and the Ohio attorney general is prosecuting. Defense attorneys have launched a media campaign. And women's rights groups are keeping watch.

This is an extraordinary juvenile rape case — and the people of Steubenville have known it pretty much since last August.

As far as the social media, people don't know us in Steubenville. They think we're all for rape; they don't know us.

Mike Rebar, who runs a used-appliance store downtown, says people outside have been willing to believe the worst of the old steel town with a proud high school football tradition.

"As far as the social media, people don't know us in Steubenville. They think we're all for rape; they don't know us," he says. "They want the coach fired, they want the kids hung down on Fourth and Market."

The radio playing in the back of Rebar's shop carries an account of Wednesday's juvenile court proceedings. None of the first three teens who testified agreed to be recorded, so there was no audio or video of the teens describing an evening of partying that began with vanilla-flavored vodka in slushie cups.

She also got into a car with Steubenville athletes — the last her friends saw of her that night. The next morning, one of her friends picked her up, and "she started crying and said, 'I don't remember anything.' "

Then the cellphone images started appearing — images that apparently showed the girl in and out of consciousness, carried from party to party. The two boys were charged with rape.

But social media's role wasn't over. A 12-minute video recorded later by another athlete joking about the girl being "so raped" and "so dead" spawned outrage — and suspicion of a cover-up for other athletes. That led to an online campaign demanding justice for the girl who has been identified only as Jane Doe.

Defense attorneys maintain that all of that has led witnesses to tailor their stories to assuage their guilt. Outside the court, defense attorney Walter Madison underscored testimony that, for some of the partiers, there was really nothing unusual about the night.

"Not to say these charges aren't significant — they're very significant. But at the moment, and at the time, I don't think anyone believed what they saw was out of the ordinary [for] any of the other 50 kids," he said.

And that's what worries Juanita Lucci, who was at lunch at a downtown restaurant.

"I don't want to just say football players, but all young males — we're failing somewhere if they think this is the norm," she says. "And I'm not just blaming the boys, either. See, I think they have a sense of, nothing's going to happen, or no holds barred, 'We can do what we want.' "

Still, she says, the town does not deserve a collective blame for what happened.

But Maria Gordon says there is a collective responsibility. She traveled to what locals call "the valley" from West Virginia, across the Ohio River, to support Jane Doe.

"She's a human being, and what has happened to her is inhuman," says Gordon. "It takes a valley to raise a child, so she's all of our child."

But Jefferson County Sheriff Fred Abdalla says some of those purporting to defend Jane Doe have done their own harm — including issuing death threats against the high school.

"You take those threats seriously," he says, "because you've got a lot of whackos out there in America, as you well know."

For now, though, the threats have died down as advocates in and out of the town of Steubenville seem willing to allow the case to play out in the courtroom.