Accessibility links
Showing Off Shopping Sprees, Fashion 'Haulers' Cash In Online So-called "haul videos" are the YouTube version of a time-honored tradition: showing off the spoils from a trip to the shopping mall. Some haulers have garnered thousands of followers, as well as relationships with retailers who compensate the young fashionistas for promoting their products. 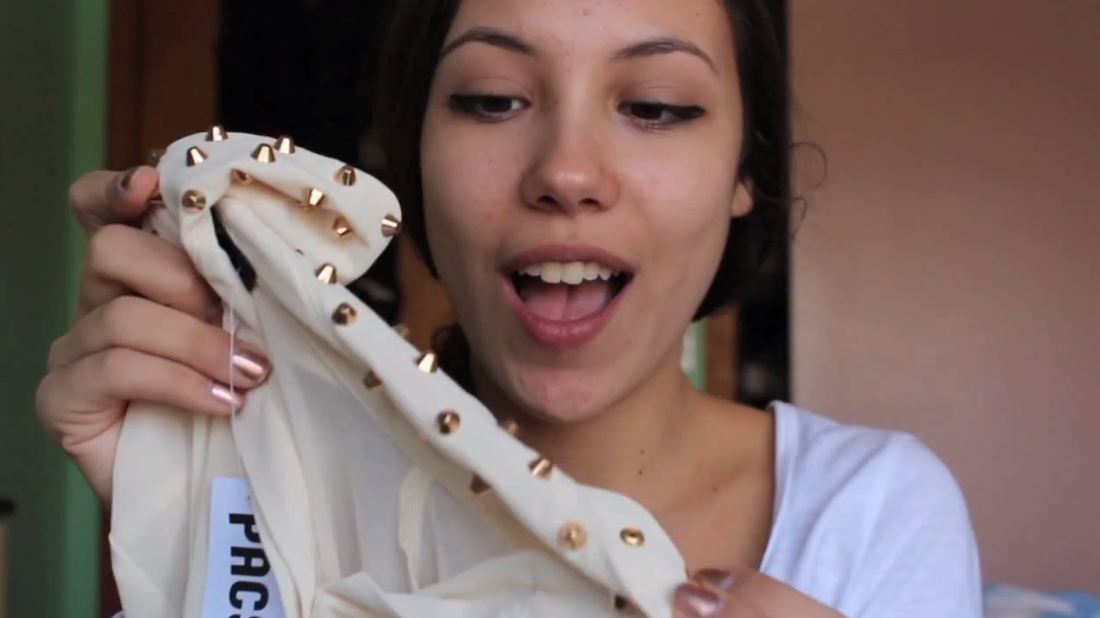 Abigail Moscaritolo holds up a recent fashion find on a "haul video." The YouTube trend has become so popular that fashion retailers are approaching haulers to promote their products online. AbbyLynn401/YouTube hide caption

Before getting to her homework, Abigail Moscaritolo, 19, sits in her unadorned room and adjusts her webcam. With little effort, she spills about the cute things she bought last week: a lazy white tee, a couple of basic black tops, bohemian-like earrings.

"This was on sale for $20 with 70 percent off, so you do the math," she says, holding up an oversized shirt.

She's making a "haul video" — the YouTube equivalent of calling a best friend and gushing about a recent shopping spree. Trivial details are accepted and overexcitement is encouraged.

"I thought it'd be cool to give fashion inspiration to other people," says Moscaritolo, who constantly reassures her audience that she's not bragging about her finds.

Making haul videos is a hobby for Abigail Moscaritolo. But for the most successful haulers, the pastime can garner lucrative arrangements with retailers.

On the hauler totem pole, Moscaritolo is still at the very bottom. She started making the videos only recently after watching an army of successful haulers sweep YouTube in the past few years.

But rookies like her are part of the reason why the fashion ritual keeps growing.

"Haul videos are big and they are growing," says Lisa Green, head of industry, fashion and luxury brands at Google. She says there are 700,000 haul videos on YouTube today, up from 150,000 in 2010. "We saw more than 34,000 uploads happen just last month, and we've been seeing an increase in viewers on haul channels over time."

Turning A Hobby Into Profit

It's fair to say that many of the haulers behind those rising numbers love to espouse beauty and fashion wisdom. But there's an added incentive to the videos: They can be pretty lucrative.

For Caitlin Ellsworth, known as Glamourista16, hauling is a part-time job. When she started three years ago, her bouncy personality attracted not just tens of thousands of admiring fans, but lots of fashion retailers — and they came bearing offers.

"I had no idea what to expect when the first company approached me," Ellsworth says. "It was from a cosmetic company and they just said, 'Hey, I'd like to hear your feedback on this eye shadow, and it'd be awesome if you could feature it in a video.' "

Caitlin Ellsworth, or Glamourista16, has relationships with more than 15 companies, including Seventeen Magazine and several YouTube beauty channels.

There are many ways haulers partner with companies, Ellsworth says. Some review products from retailers that then pay them. Others receive commission on sales generated by videos that feature a company's product. In some cases, girls with corporate sponsors host contests to give away products.

In every scenario, haulers are required under Federal Trade Commission guidelines to disclose in videos if they received free things.

"For me ... it's not an incentive to just get free products," says Ellsworth, who won't feature a product unless it's something she'd actually buy. "I love trying new things and I think it's fun."

Lately, she's been trying a lot of new things from the junior apparel company Windsor. Windsor doesn't pay Ellsworth, but it gives her license to pick out and keep a limited number of outfits that she'll feature in videos.

Evelyn Campos, Windsor's assistant manager for online and marketing, says the company started relying on haulers several years ago as a marketing tool during tough economic times. "We needed a way to reach out to our customers without having a huge marketing budget," she says. "And we felt this was right up our alley with our target demographic."

Campos says the videos of the 20 haulers she works with garnered more than 5 million views last year. She doesn't want to disclose how much the company profits from haulers, but a Google study indicates that it's probably lucrative. Four out of 10 people who watch a haul video end up virtually or physically visiting whatever store is mentioned, according to the study.

While that kind of following can benefit clothing companies, it's also huge for haulers like Ellsworth who have their eyes set on a big dream.

When Does Mom's Blog Become An Ad?

"I'm currently working on expanding my name and I definitely want to have my own beauty business, whether that be with makeup or fashion," Ellsworth says.

Only a handful of the biggest haulers can say they made it to the fashion big leagues. Elle and Blair Fowler, sisters from Tennessee, stumbled into haul and beauty videos five years ago, and have since attracted millions of fans with their uniquely animated personalities. The pair have released a book, Beneath The Glitter, and have even launched a beauty product line.

"For years, we've been creating video blogs and we've tested literally every single beauty product out there," Blair Fowler said in a video launching their makeup line. "So, we decided to take it upon ourselves to perfect our favorite products and colors."

They are, after all, beauty gurus — a title thousands of haulers aspire to.