Accessibility links
A 'Good Enough' Dad And His Special Son Tim Harris had wanted to open a restaurant for as long as he could remember. In 2004, with help from his father, Tim, who has Down syndrome, opened Tim's Place in Albuquerque, N.M. He calls it the world's friendliest restaurant, and doles out hugs to customers six days a week. 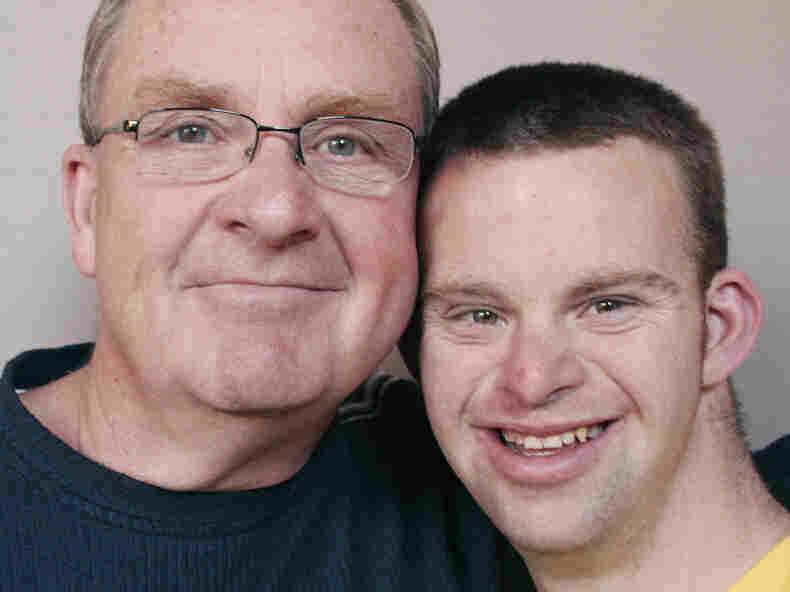 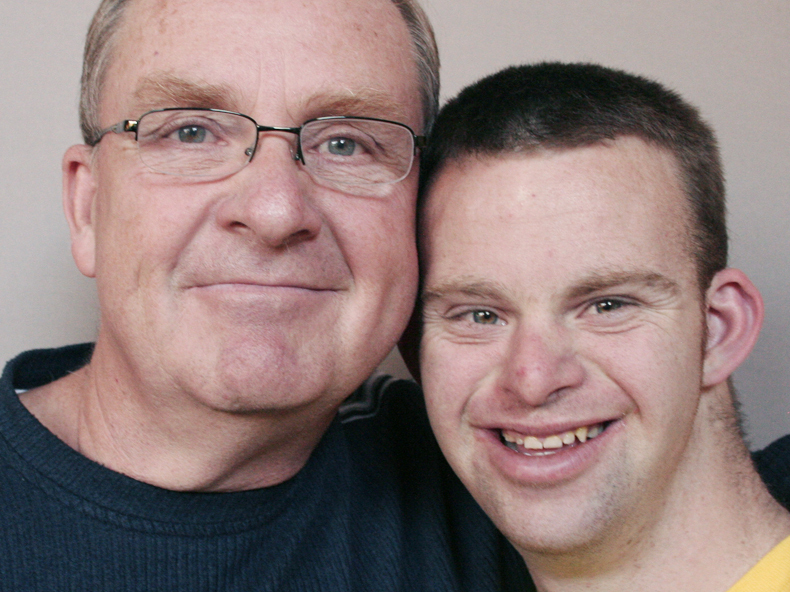 Tim Harris (right) and his father, Keith, visited StoryCorps in their hometown of Albuquerque, N.M.

In Albuquerque, N.M., there's a restaurant called Tim's Place. It's named after Tim Harris, a young man with Down syndrome who started the business in 2010 with help from his dad, Keith.

Six days a week, Tim greets each customer at the door. He calls it the world's friendliest restaurant.

The day Tim's Place opened "felt awesome," Tim, 27, tells his father on a visit to StoryCorps. "I wanted to own a restaurant ever since I was a kid. That was my dream."

When he was in high school, Tim decided he wanted to go to college. "I wanted to learn to be independent, so I can become a businessman," he says. In 2004, he moved about three hours away to Roswell to study food service, office skills and restaurant hosting at Eastern New Mexico University.

The separation wasn't easy at first — for Tim or his parents.

"When your mom and I dropped you off that first day, Tim, we really didn't want to leave," Keith, 56, tells his son. "Maybe around 2 o'clock, you looked at your watch and said, 'I think you guys better get back to Albuquerque; it's a long drive.' And I still remember what it felt like to get in that car and drive away. It was one of the most scary and sad moments of my life."

"I pretty much, like, stayed in my room because I was upset, missing my mom and dad," Tim recalls. "That was the saddest part. I cried in my pillow. My pillow was nothing but tears. So I decided to knock it off and make friends. It didn't take long." 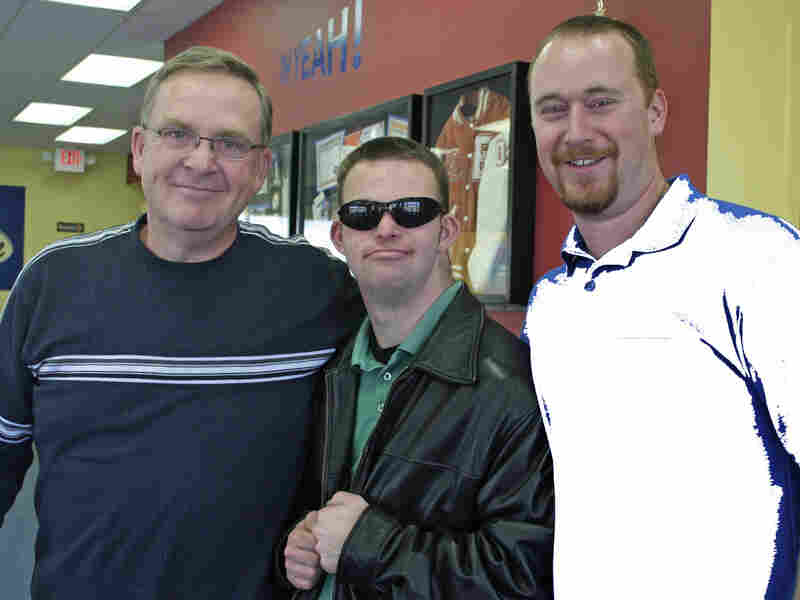 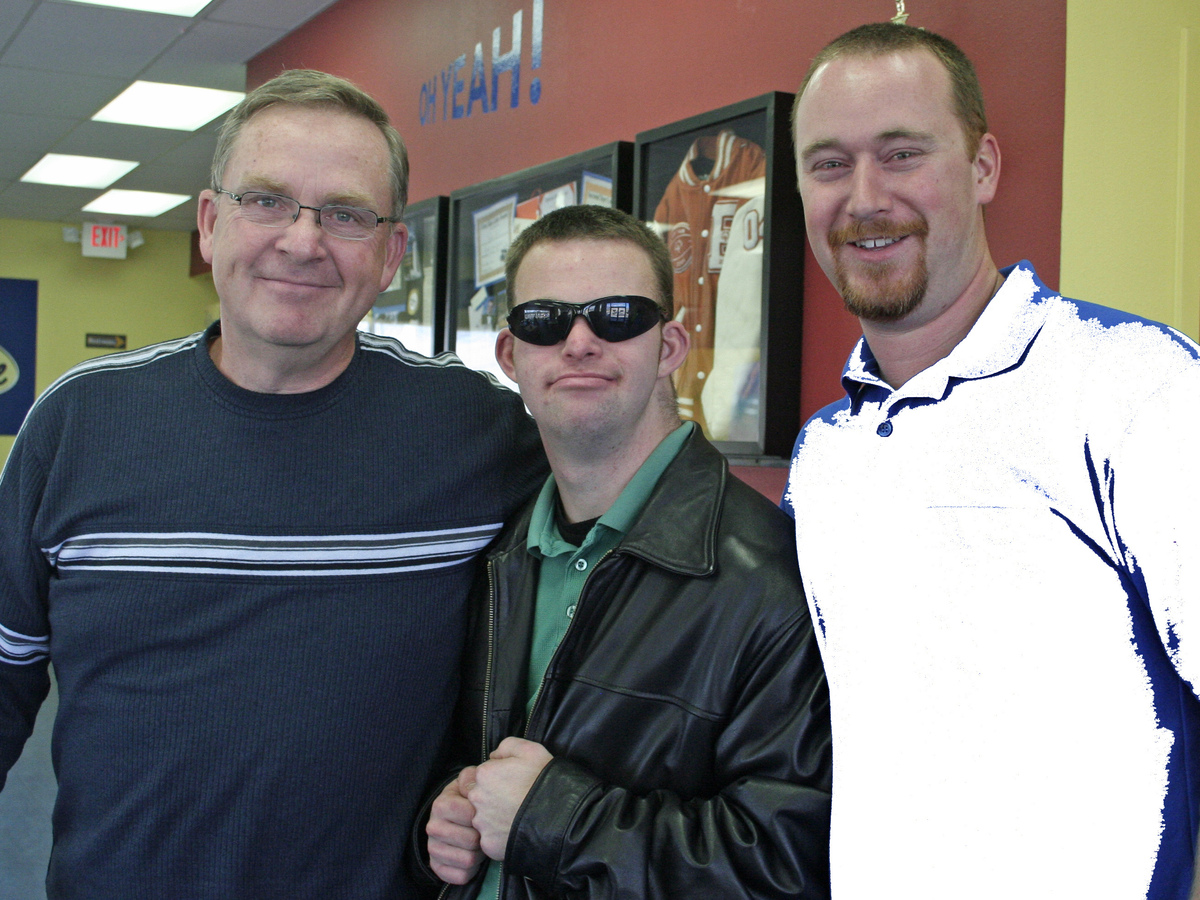 Tim with his father, Keith, and brother Dan (right) at Tim's Place. Dan is the restaurant's operations manager.

"Did you have parties in the dorm and stuff like that?" Keith asks.

Now Tim lives in his own apartment within walking distance of his restaurant. Every day, when customers come into the restaurant, "when they see me, they just melt into my arms for a hug," he says. The hugs are tallied on a digital counter on the wall, which now displays more than 33,000 hugs.

"When you meet families in the restaurant and other places that have babies and little kids with Down syndrome, what kind of advice do you have for those families?" Keith asks.

"I think those families have somebody very special. Families tell me, 'You inspire my kid. There's hope for my son or daughter.' And when I see people with disabilities and they tell me, 'Tim, I want to be like you,' it's pretty cool."

"How does it feel having a son with a disability?" Tim asks his dad.

"You know, Tim, when you were born I was filled with a lot of doubts about whether I could be a good enough dad to be your dad," Keith says. "And many years later now, I'm so happy to have you in my life. I'm very, very proud of you and what you've become."

"Dad, you are the most loving dad ever. And Mom, too," Tim says. "You guys are my superheroes. And having you in my life, that makes me special."