Accessibility links
Could Tapping Undersea Methane Lead To A New Gas Boom? A giant reservoir of natural gas lies under the ocean floor, and no one had successfully extracted it until this week. Japanese engineers pulled it up through a well from under the Pacific. But there are still lots of unanswered questions about the viability of this new gas supply. 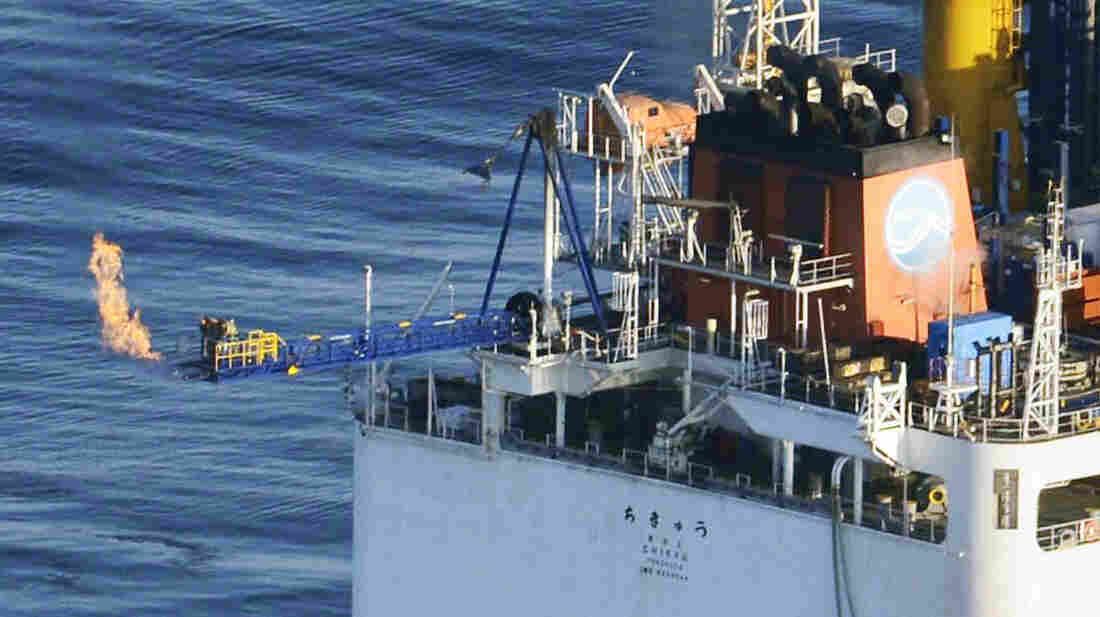 This photo from a Kyodo News helicopter shows a flame of natural gas from a Japanese deep-sea drilling ship on Tuesday. This successful extraction of methane from the seafloor was a world first. Kyodo/Landov hide caption 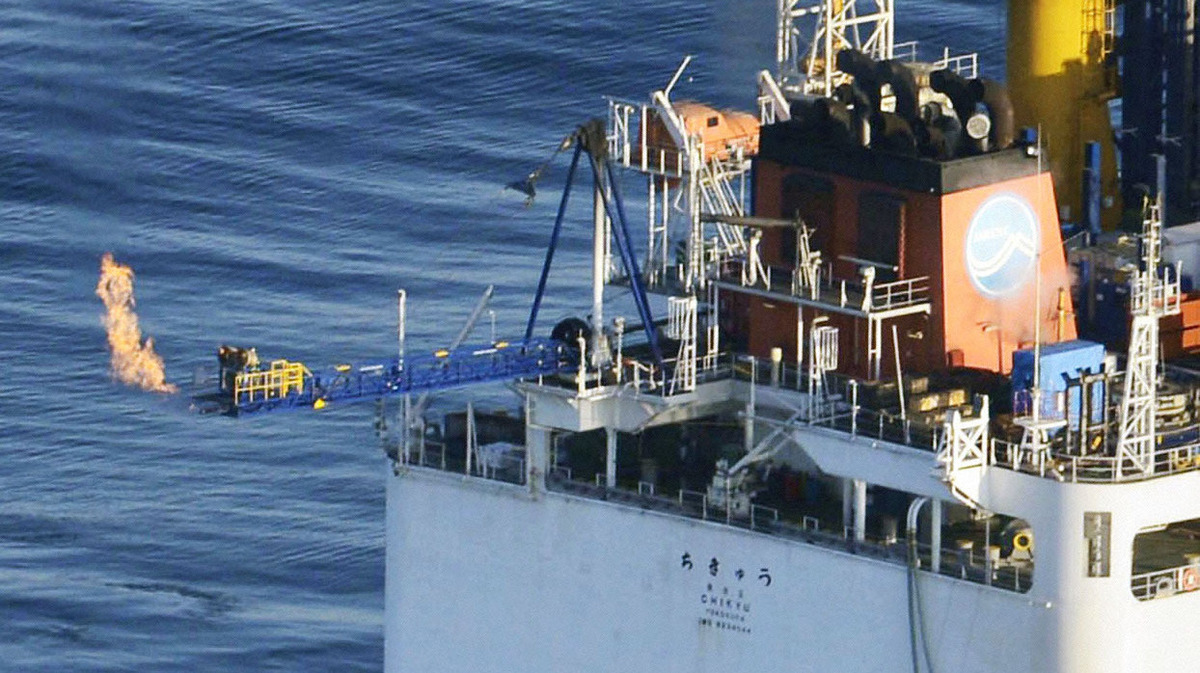 This photo from a Kyodo News helicopter shows a flame of natural gas from a Japanese deep-sea drilling ship on Tuesday. This successful extraction of methane from the seafloor was a world first.

The new boom in natural gas from shale has changed the energy economy of the United States. But there's another giant reservoir of natural gas that lies under the ocean floor that, theoretically, could dwarf the shale boom.

No one had tapped this gas from the seabed until this week, when Japanese engineers pulled some up through a well from under the Pacific. The gas at issue here is called methane hydrate. Methane is natural gas; hydrate means there's water in it. In this case, the molecules of gas are trapped inside a sort of cage of water molecules.

Few people have actually seen methane hydrates, but Ann Cook, a geophysicist at Ohio State University, is one of the few. 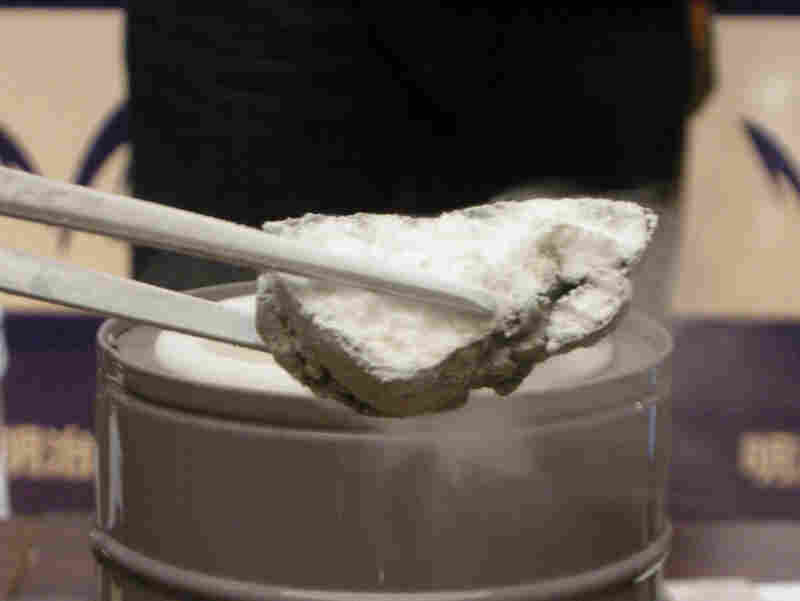 Methane hydrates, like this sample extracted from the floor of the Sea of Japan, are potentially a huge new source of natural gas. The methane molecules are trapped inside a cage of water molecules. Kyodo/Landov hide caption 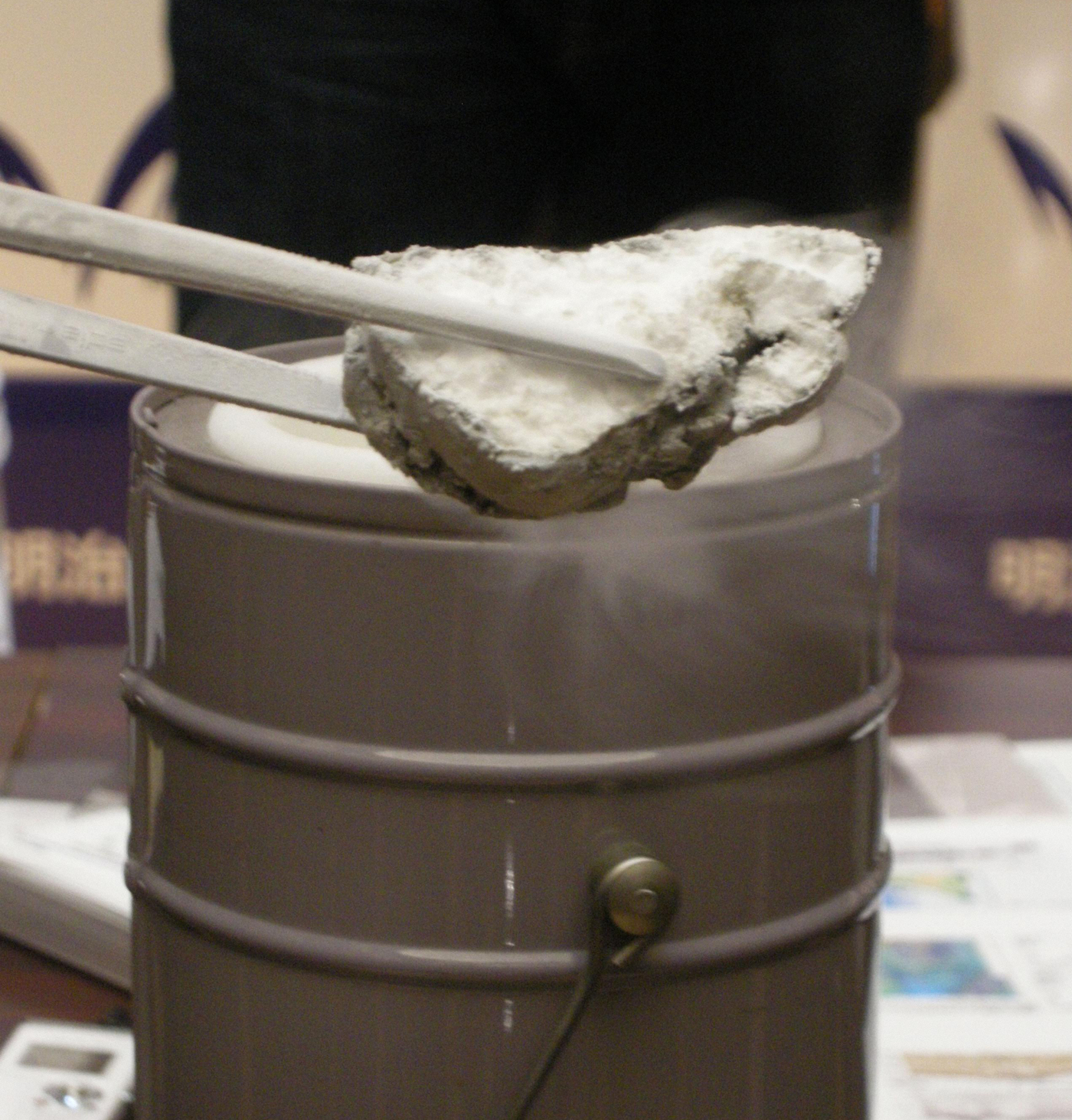 Methane hydrates, like this sample extracted from the floor of the Sea of Japan, are potentially a huge new source of natural gas. The methane molecules are trapped inside a cage of water molecules.

"If you think about snow freezing in mud, that's what it would look like," says Cook, who spends weeks at a time looking for methane hydrates aboard drilling ships. "You would think, 'Oh, it's not so interesting,' " she says. "But then if you decided to light it on fire, it would burn right in front of you."

You can find methane hydrates underground in the Arctic, in frozen soil called permafrost. But most of the stuff lies under the seafloor, cold and under high pressure. It took millions of years for it to form, mostly from ocean microbes eating dead plankton. "And when those things die," says Cook, "they sort of rain down onto the ocean floor. And then later on, that organic matter is eaten by little microbes, and in the eating process, they spit out methane."

Scientists have brought up samples of the stuff, and actually tapped clean gas from reservoirs under land. But only this week have they tapped an undersea reservoir, a breakthrough by a Japanese crew drilling in the Pacific.

There could be a lot of this gas. The U.S. government estimates that along U.S. coastlines, there's enough to supply the country for decades. But there could be hazards in getting to it. Methane is a powerful greenhouse gas, and if a lot of it escapes into the atmosphere, that could hasten global warming.

Geologist Timothy Collett with the U.S. Geological Survey says it's still too early to either bet on a bonanza or worry about the climate. "Anyone who gives you a definitive answer — including me — about the potential of it being either a climate issue or hazard [versus] being a resource, has got a 50-50 shot of being accurate. We don't know enough," he says.

But that's not for lack of trying. The Department of Energy has been spending $10 million to $15 million a year studying methane hydrates. Ray Boswell, the technical manager on methane hydrates at the DOE's National Energy Technology Laboratory, says drilling for them in the seabed may not be risky since their natural state is to stay put.

"You will have to exert constant effort to push the hydrate into an unstable condition" so that it will rise up the well to the surface, Boswell says. "So our issue with gas-hydrate production is not [concern about a possible] runaway reaction. The challenge is figuring out how to keep it going."

But the story on methane hydrates isn't just about getting them up. There's lots of methane bound up in Arctic permafrost, and some climate scientists worry that it could bubble up into the atmosphere as the climate warms. Boswell points out that over the past 10,000 years, the sea level has been rising and is continuing to rise. When water inundates that permafrost, the methane could be released — at least theoretically. Collett notes, though, that this process could take thousands of years.

Scientists agree that there is a lot to learn about these huge reservoirs of natural gas. In the meantime, several countries that are hungry for new energy sources — including Japan, Korea, China and India — are mounting drilling expeditions to get it out of the seabed and into pipelines.