Accessibility links
Craft Brews Slowly Chipping Away At Big Beer's Dominance Beer is a $200 billion a year business in the U.S., with most of that money going to two companies: Anheuser-Busch InBev and MillerCoors. But smaller "craft" breweries are challenging that dominance in a battle that's being waged on grocery store shelves and in local pubs. 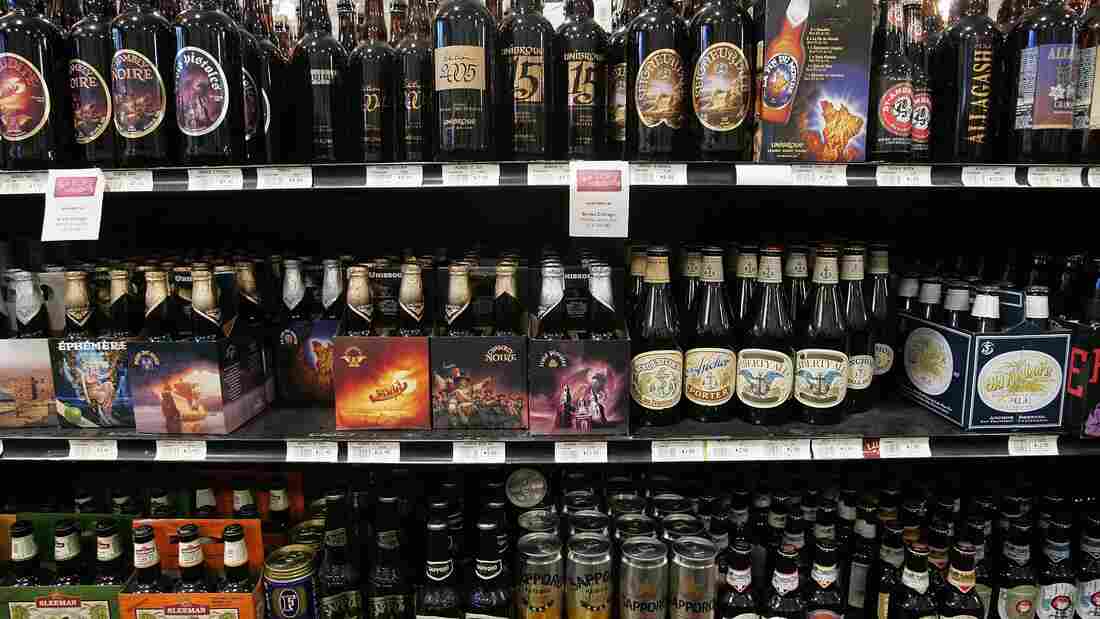 Craft beers for sale in Chicago. Craft beer has about a 6 percent market share in the U.S. beer market, which is dominated by Anheuser-Busch InBev and MillerCoors. Scott Olson/Getty Images hide caption 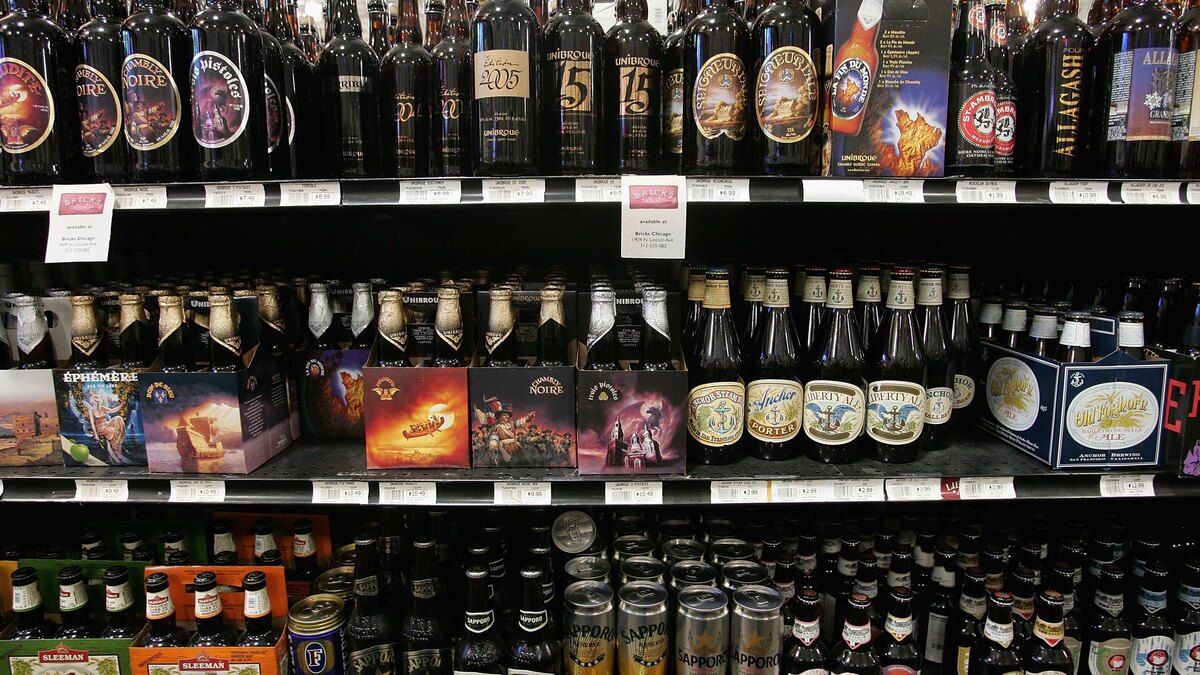 Craft beers for sale in Chicago. Craft beer has about a 6 percent market share in the U.S. beer market, which is dominated by Anheuser-Busch InBev and MillerCoors.

In the U.S., we drink $200 billion worth of the hops-brewed libation annually. What many Americans might not know is that most domestic beer, 90 percent in fact, is dominated by just two companies: Anheuser-Busch InBev and MillerCoors.

Innovators, however, are challenging that dominance in the form of craft beer breweries. Small mom-and-pop-style breweries — or regional breweries — now account for about 6 percent of domestic beer sales. That may seem like a small number, but it's been growing every year since the early 1990s, while big brewers' share is declining.

There are now more small breweries than there were before Prohibition, when beer was largely a regional business.

At Meridian Pint, a trendy D.C. bar and restaurant, you wouldn't even be able to order a Budweiser, Coors or something else from the big two.

"I try to have a nice mix of approachable craft beers, as well as exciting new stuff for people who have tried a lot of everyday beers," says Sam Fitz, the beer director for Meridian Pint. He's a Cicerone, which is like a sommelier for beer.

Meridian Pint offers brands such as DC Brau, Flying Dog and Oxbow. Fitz says he prides himself on this kind of handpicked selection, but there are some brands he won't carry.

"I do not carry any beer that comes under the Miller or Coors or Bud labels," he says.

That's just fine with his customers, like Landon Rordam, who says he isn't looking for those big names but instead tries to find something he hasn't tried before.

Who Grew Your Pint? How Craft Brews Boost Local Farmers

The Ale That Men Brew: Iron Maiden Serves Up A Beer

Consolidation of the big brewers also worries the Justice Department, which recently blocked an attempt by Anheuser-Busch InBev to buy the 50 percent of Grupo Modelo it does not already own. The Mexican beer maker, the world's third-largest, owns Corona, Negra Modelo and other brands.

Journalist Elizabeth Flock, who reported on the blocked merger and the beer market for U.S.News and World Report, says the Justice Department said AB-InBev, by buying Grupo Modelo, would effectively eliminate its competition.

The problem for craft brewers, Flock tells Jacki Lyden, host of weekends on All Things Considered, is that those sorts of mergers make the fight against big beer companies even more difficult.

"Everyone wants to be on grocery store shelves at eye level," Flock says. "Craft brewers say big beer is increasingly pushing them out of those prime spots."

"A lot of people think that [Blue Moon] is a craft beer, but it is in fact owned by MillerCoors," she says.

Craft brewers argue that this limits consumer choice, Flock says. For instance, if a bar stocks the top brands from a big brewer along with these "crafty" beers, consumers are essentially only buying from a single company.

Not everyone agrees. Benj Steinman, an editor for Beer Marketer's Insights, a trade publication, says these so-called crafty beers might be helping the craft beer market.

"What Anheuser-Busch and Coors have done through Shock Top and Blue Moon is opened up a greater number of consumers to the universe of craft beers and their innovation, flavor and variety," says Steinman, a 30-year veteran of the beer business. "They're sort of gateway beers."

In other words, they are more accessible craft beers that might get you started wanting to taste other, more complex beers with notes of dark cherry or sassafras molasses.

Julia Herz, the craft beer program director for the Brewers Association, says big beer should print its names on the bottles.

"What we've called for is a transparency of parent company ownership, and to put that on the beer label so the beer lover has a chance to know who's behind those brands," she says.

Herz says branding matters to many beer drinkers, especially those who care about the brands they consume and who owns those companies.

"A lot of millennials are associating themselves with what they consume and what they hold in their hand," she says.

The Question Of Cost

Craft beers are, without question, more expensive, which might make it harder for them to compete against the bigger brands.

"This is a very middle-class beverage, [a] working-class beverage," says Chris Thorne, a spokesman for the Beer Institute, the largest beer industry trade group. "So what a lot of people are looking for is what's affordable."

Thorne says fierce competition is nothing new in the beer business: It's been that way since the days of Fred Miller, Freddy Heineken, Adolph Coors and August Busch.

"These are names that are rooted in our heritage, in the beer-drinking culture in the U.S., and they never got a break," Thorne says. "They competed with each other."

Back at Meridian Pint, beer director Fitz shows off his 24 beer taps, all pouring high-end craft brews. He really doesn't want to lose that market share to beers pretending to be microbrews.

"It certainly is more expensive, but for what we're trying to do, we're trying to offer the highest-quality products that we can," he says, "and that means buying from producers that use good ingredients and are innovative producers."

In the bar, customer Rordam says even if he has sampled some upscale microbrews at $6, $7 or $8 a pint, those prices might eventually force him to go back down the ladder.

"After I've had like three or four microbrews, I'll think, 'Wow, that was $25 [or] $30, I should probably get a Bud Light now because this is getting ridiculous,' " he says.