Accessibility links
Familiar Folks Make Up A Play's 'Good People' The most frequently produced play in America these days is a semiautobiographical look at class divides in the modern U.S. David Lindsay-Abaire's Good People explores what can happen when two kids from the same neighborhood grow up to become two very different adults. 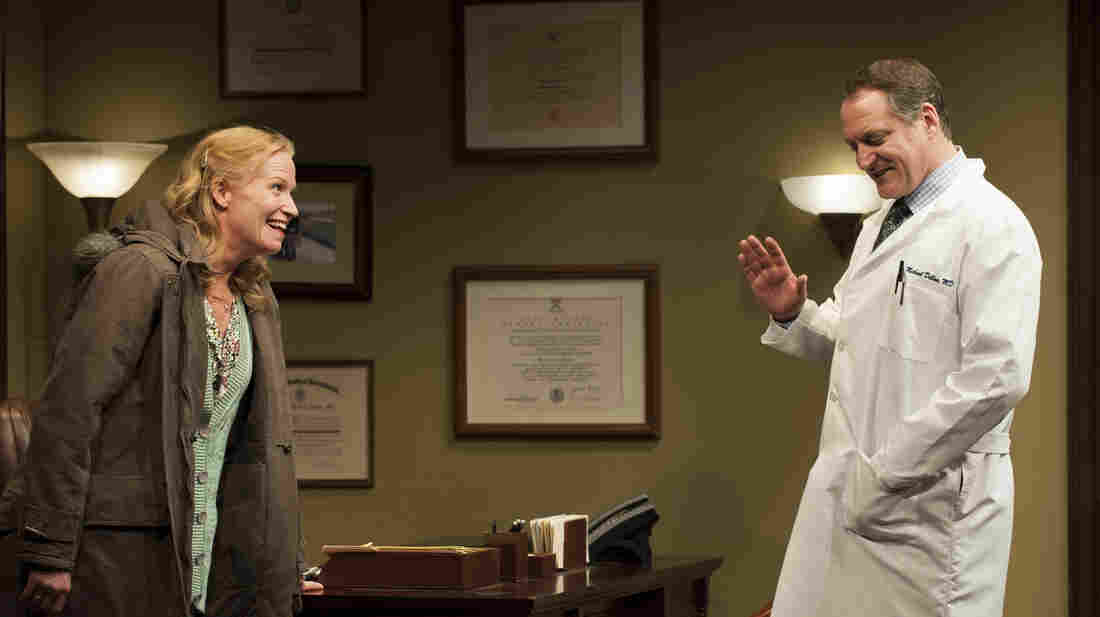 How we end up in life has a lot to do with where we came from. That theory gets a good workout in the play Good People, from Pulitzer Prize-winner David Lindsay-Abaire. When the show was on Broadway two years ago, the trade magazine Variety proclaimed that "If Good People isn't a hit, there is no justice in the land."

As it turns out, justice has been served: Good People is the most produced play in America this theatrical season. By the end of this summer, it will have been on stage in 17 different cities.

Watch A Clip From 'Good People' - 'Mikey Dillon, You're Rich!'

The setting is two very different Boston neighborhoods: working-class Southie and upscale Chestnut Hill. Lead characters Margie Walsh and Mikey Dillon grew up together in the former, and had a summer romance when they were teenagers. Now they're both about 50. They haven't seen each other in decades. She still lives there; he doesn't. He's a doctor now.

"You're rich," she exclaims when they encounter each other. When he protests that he's not — he's merely "comfortable," he demurs — she ribs him but good.

Good People is partly about learning how the other half lives. Margie is a single mother raising an adult child who's disabled. She just lost her job as a cashier at the Dollar Store, where she made $9.20 an hour. She'll find out as the play goes on that Mikey can afford to pay his baby sitter — a teenager — $15 an hour.

Two people. Same background. Very different paths. For Lindsay-Abaire, Good People is a personal story. He grew up in Southie.

"My father was a fruit peddler for all of his life," he says. "He sold fruit out of the back of the truck. And my mother was a factory worker."

Every day after school, Lindsay-Abaire went to the Boys & Girls Club in Southie. When he was 11, the club got him a scholarship to attend Milton Academy, a private school just outside of Boston.

"And so every day I would get on that train and take the subway out to the suburbs and rub elbows with these mostly wealthy kids and learn about Shakespeare and Proust — and then I get back on the train and go back to Southie every night," Lindsay-Abaire remembers. "So I was, from a relatively young age, incredibly aware of class differences and how difficult it can be to escape the class that you grew up in."

A Play About Choices, And Those Who May Not Have Them

But in the play, the people who still live in Southie don't necessarily want to escape. They're struggling, but they're not unhappy. During a bingo game, Margie tells her friends she's going to a party at the now-rich Mike's house.

"Maybe somebody at Mike's house will have something," she says, meaning a connection who might hire her. 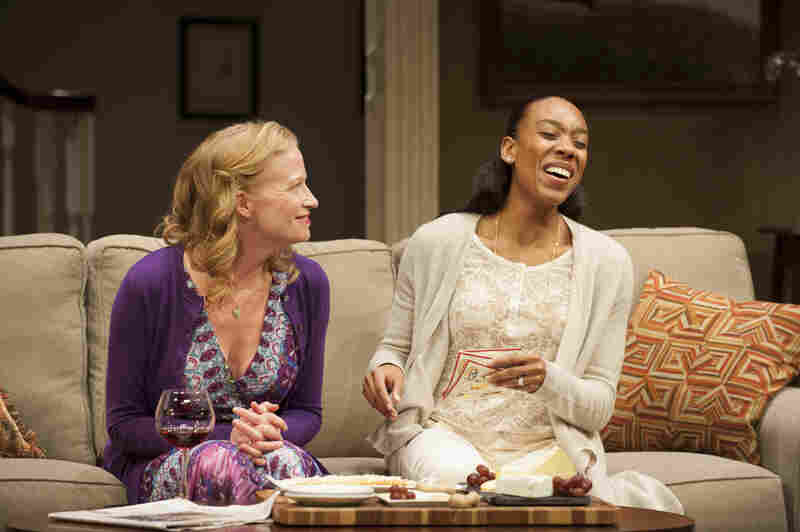 Day and Francesca Choy-Kee as Kate. Day says her fiery character is "not book smart and didn't get to be educated, but she is smart." Margot Schulman/Arena Stage hide caption 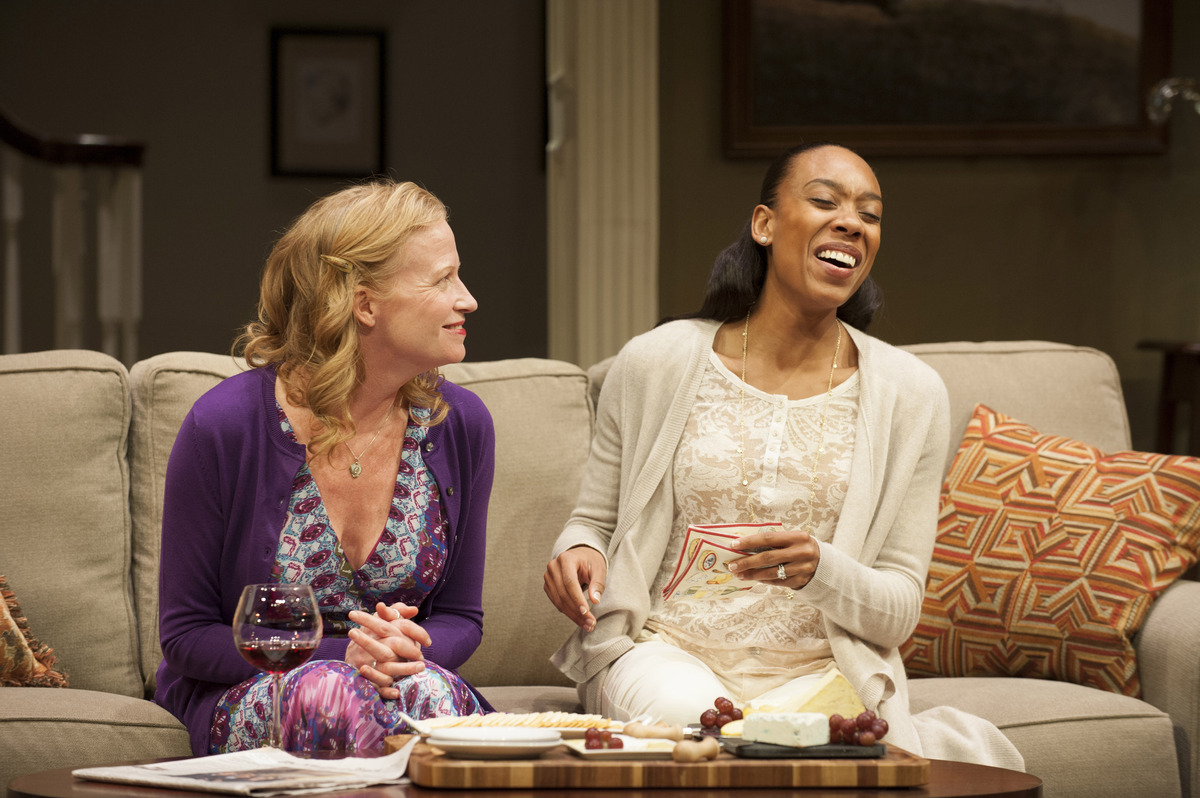 Day and Francesca Choy-Kee as Kate. Day says her fiery character is "not book smart and didn't get to be educated, but she is smart."

"That's right," a friend replies. "You make an impression. People like you. Who knows — maybe you'll even find a husband there."

"That's exactly what's gonna happen," Margie cracks. "'Cause what guy can resist a middle-aged lady in an outfit from Goodwill."

At Arena Stage in Washington, D.C., and at the Huntington Theater in Boston, Margie Walsh was played by Johanna Day.

"She's not book smart and didn't get to be educated, but she is smart," Day says. "She's a really bright woman, and believe me she takes in and she clocks everything that everybody's saying."

The tension in the play escalates when Margie goes to Mike's house. Since she desperately needs work, his wife offers to let her baby-sit their young daughter. Mike is against it. He points out that Margie can't seem to hold down a job because she's always late. Margie rejoins that it's not always her fault; a life on the edge, given the hard choices it inevitably entails, is subject to all kinds of disruptions.

But Good People is by no means a preachy play. In fact, there are moments when you feel plenty sorry for Mike Dillon, given the verbal beating he's taking from Margie Walsh. Mike has genuinely worked hard to get to where he is in life. But Margie points out that Mike had something she — and many of the other kids in Southie — didn't: a father who worked and watched out for him. Lindsay-Abaire says he wanted to explore the question of "making it": Was it luck, hard work or a combination of the two?

"The doctor character feels totally entitled to his life and feels like it was never going to go any other way because he worked hard and pulled himself up by the bootstraps. And if you don't do that, that's why you get stuck where you are," Lindsay-Abaire says. "And in a very accusatory way, he throws that at Margie who makes the argument that, 'No, sometimes you're actually born into circumstances where it's very difficult to get out — and if you don't have the lucky breaks or can't recognize what an opportunity is then I might not end up where you are out in this fancy house in the suburbs.'"

When Good People played at the Huntington Theater, many of Lindsay-Abaire's old friends from Southie showed up, as did some of the friends he made when he left.

He says it was a very poignant intersection of his two lives.

"The Huntingon happens to be across the street from the very corner where my father sold fruit out of the back of the truck," Lindsay-Abaire says. "And so I would sit with my dad in the back of that truck over the summer and sell plums and peaches to these kids from [Boston University]. And I would look across the street and say, 'What's that over there?' 'Oh, they're doing something called The Piano Lesson by August Wilson.'

"And it felt impenetrable to me as a person that there was a real, this very solid, blocky building, and I was the poor kid selling fruit on the street with my dad. And so for many years later to be at that theater and to have my play done in that theater, thinking, 'Oh my Lord I sat across and looked at this theater.'

"It felt very strange," he says, laughing. "It felt gratifying of course, but it also felt, um, 'God, how did I get inside this building?' and 'Why am I sitting in these plush seats?' and 'How can I get those people selling fruit on the corner in here?' "

He knows that would be very hard for someone like Margie Walsh. Good People will be in several theaters around the country in the coming months, including Cleveland, Phoenix and Miami.